Tomato products are aﬀordable, easy to use, and delicious—making it even easier to add colorful, health-protective fruit and vegetable servings to the diet. Plus, they are one of the true stars of the Mediterranean diet. Homegrown or sold at your local farmer’s market or grocery store, simply sliced and served with only a sprinkle of salt or a drizzle of olive oil, they are the essence of summer. 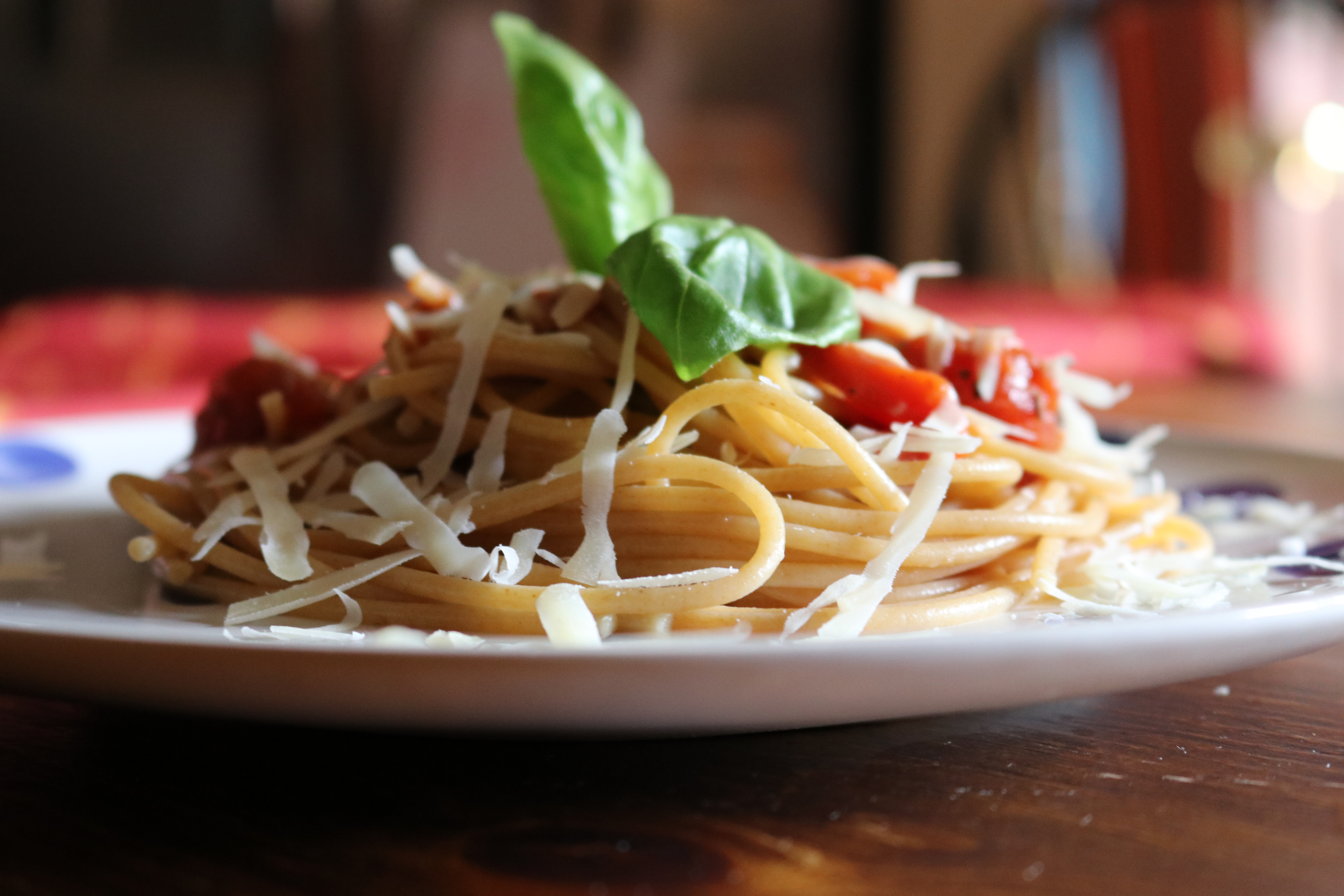 Fresh tomatoes—including cherry, grape, and plum varieties—canned tomatoes, and dried tomatoes are a versatile staple that partners beautifully with herbs and other vegetables in a wide range of traditional dishes. There are countless tomato recipes, so we’re going to focus on just a few ways these juicy gems are enjoyed around the Mediterranean.

Italy—One of the best ways to preserve tomatoes to be enjoyed all year long is to transform them into tomato sauce.  Traditionally, the San Marzano tomato, which originated in the Campania region of southern Italy, is renowned for its sweet, low acid, tomato-y taste. This has a lot to do with the fact that genuine San Marzano tomatoes are grown in the rich volcanic soil at the base of Mt. Vesuvius, not too far from Naples. You can try some for yourself in October 2022 during our week-long culinaria to Naples and the Amalﬁ Coast. As for making homemade tomato sauce here in the States, use your favorite tomato variety or varieties, whether they are fresh or canned, San Marzano or US-grown. 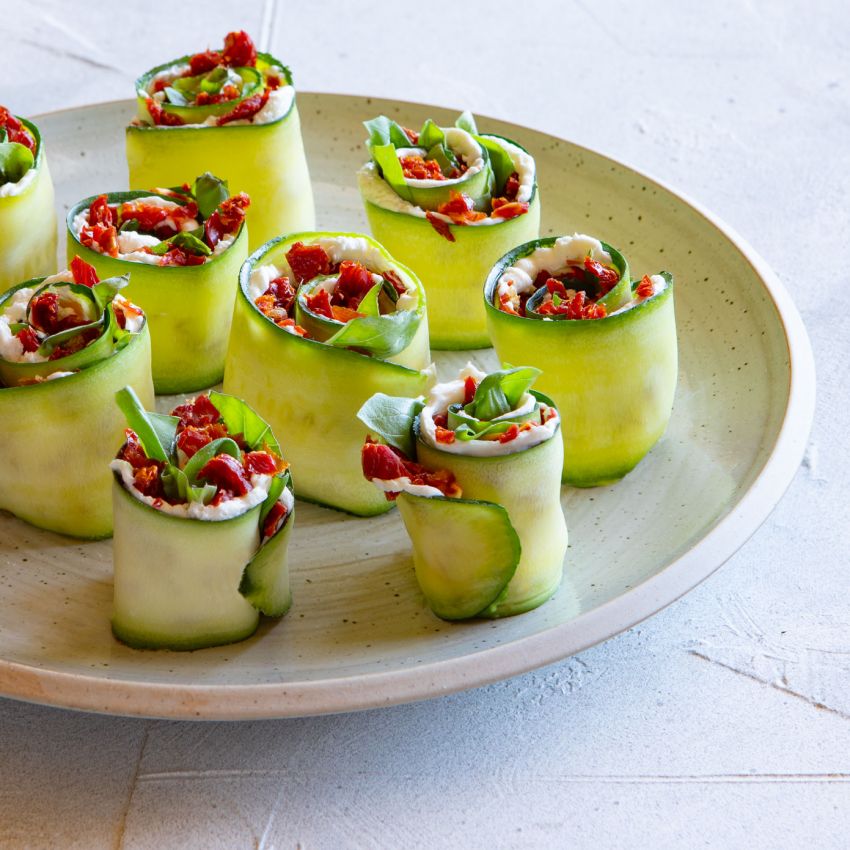 Sun-dried tomatoes are another familiar sight in the summer in the Mediterranean, especially in southern Italy and Sicily. When dried in the sun, tomatoes lose most of their water content, which concentrates their ﬂavor. You can achieve this same eﬀect by seasoning tomatoes with olive oil, salt, and fresh herbs (e.g., thyme, oregano) and slowly roasting the seasoned tomatoes in the oven, at a low temperature for several hours. Sun-dried tomatoes can be used in a variety of dishes—Here are some ideas below:

Spain—One of the simplest, (and tasty) ways to celebrate the summer tomato is pan con tomate, also known as pa amb tomàquet. This traditional Spanish tapa is nothing more than grilled bread topped with grated tomato and drizzled with a healthy dose of fruity extra virgin olive oil and a sprinkling of coarse sea salt, sometimes topped with anchovies or jamon. Don’t let its simplicity deceive you, because pan con tomate is nothing short of glorious when tomatoes are at their peak, whether as a tapa, or at any meal. 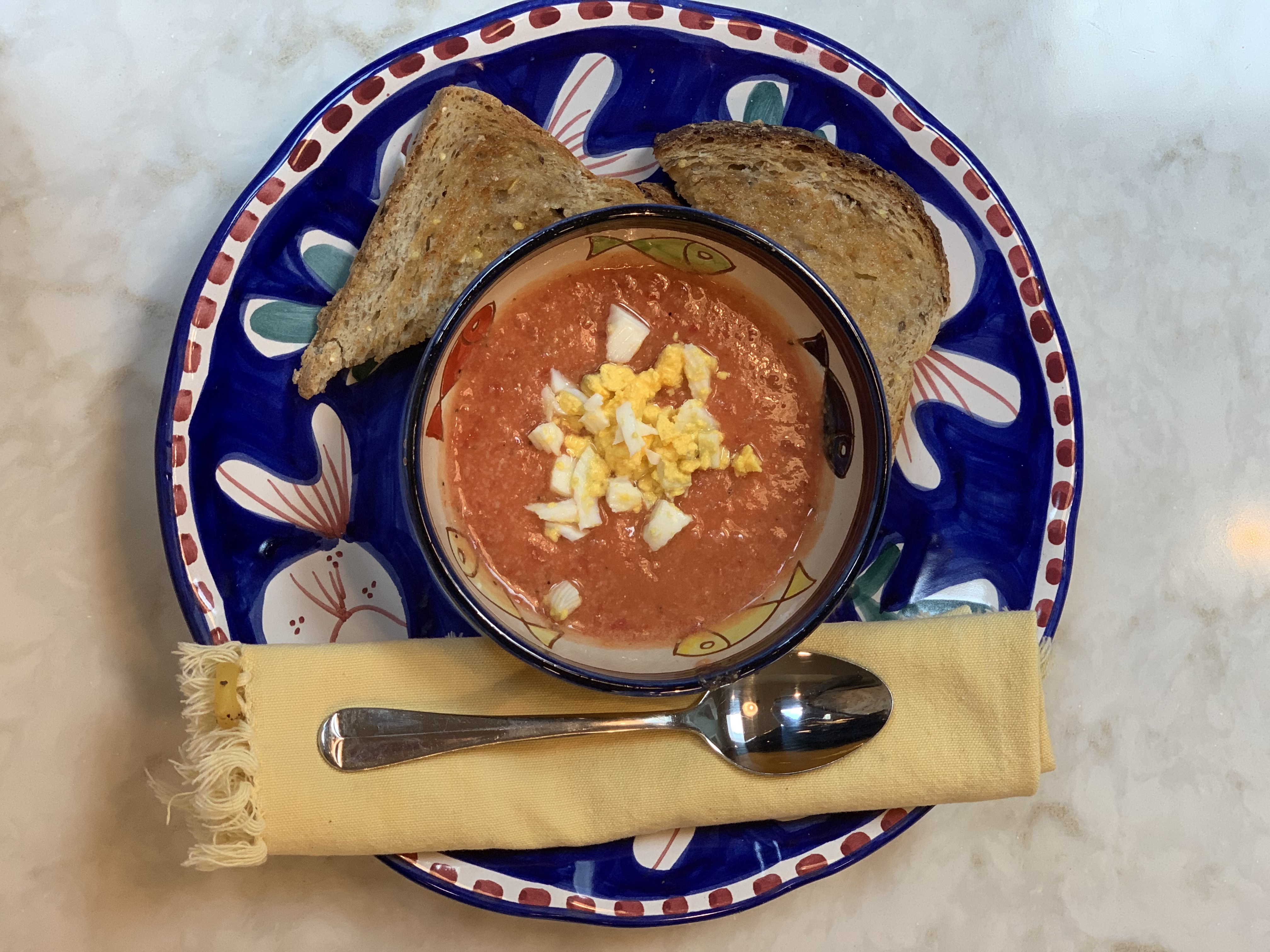 Another popular Spanish tomato dish is a chilled soup called gazpacho…But, have you heard of gazpacho’s creamier cousin salmorejo? Salmorejo is a popular Andalusian soup made primarily with tomatoes and bread, and ﬂavored with a splash of sherry vinegar. Its creamy mouthfeel may have you convinced that there’s cream in it; rather, bread and emulsiﬁed olive oil are responsible for its luscious texture. Salmorejo is typically garnished with chopped hard-boiled eggs and ham.

(By the way—Try authentic Spanish cuisine for yourself in March 2023 in San Sebastian, Rioja & the Basque Region alongside chefs Deborah Hansen of Taberna de Haro and Tracy Chang of PAGU).

Greece— Tomato fritters/pancakes (Domakeftedes) are a specialty of the Greek island of Santorini, known for its rich, volcanic soil, chockfull of minerals and nutrients, which is ideal for growing tomatoes. The fritters, which are a combination of chopped tomatoes, herbs and spices, and are fried in Greek olive oil, are a staple of seemingly every restaurant and household on the island. 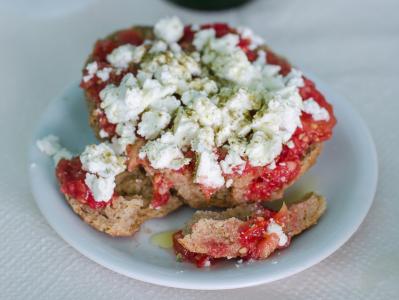 Dakos, another delicious Greek tomato dish, is a Greek or Cretan version of tomato toast or Greek bruschetta. But instead of toasted bread, twice baked (which makes them dry, crunchy, and crisp) barley rusks called paxidamia are used. The rusks are topped with chopped tomatoes, mizithra cheese, a fresh sheep and/or goat’s milk cheese, dried oregano, and a generous dose of Greek extra virgin olive oil. As the tomato juices and olive oil seep into the rusks, they soften and infuse the rusks with tomato ﬂavor.

North Africa— Shakshuka is a spicy egg dish of North African (Tunisian) origin and a popular breakfast dish throughout Israel. While there are many takes on shakshuka, a traditional rendition consists of eggs poached in a spiced tomato and green pepper stew with onions and garlic, sometimes ﬁnished with a sprinkling of sharp, salty feta cheese. Cooking tomatoes in olive oil, as is traditional all throughout the Mediterranean, is especially nutritious because it allows our bodies to absorb more of the lycopene, a powerful antioxidant found in tomatoes.

Morocco—tagines are often made with tomatoes. The dish was named for the clay or ceramic cooking pot, which was used in North Africa by nomadic people as a portable oven. The tagine is ﬂat on the bottom with a conical top, which makes it a wonderful slow-cooker.  As the food and spices inside the tagine are cooked, steam is created, which in turn, self-bastes whatever you’ve chosen to put inside, thus naturally enhancing the ﬂavor of the food.  While a tagine can be all vegetable, this method of cooking is ideal for meat or poultry because it slowly tenderizes them. Fruit and nuts are also added to tagines. In North Africa, tagines are often a communal dish, and can be served over couscous and with bread and an array of salads. Try this Chicken Tagine with Apricots  on the Oldways recipe page. 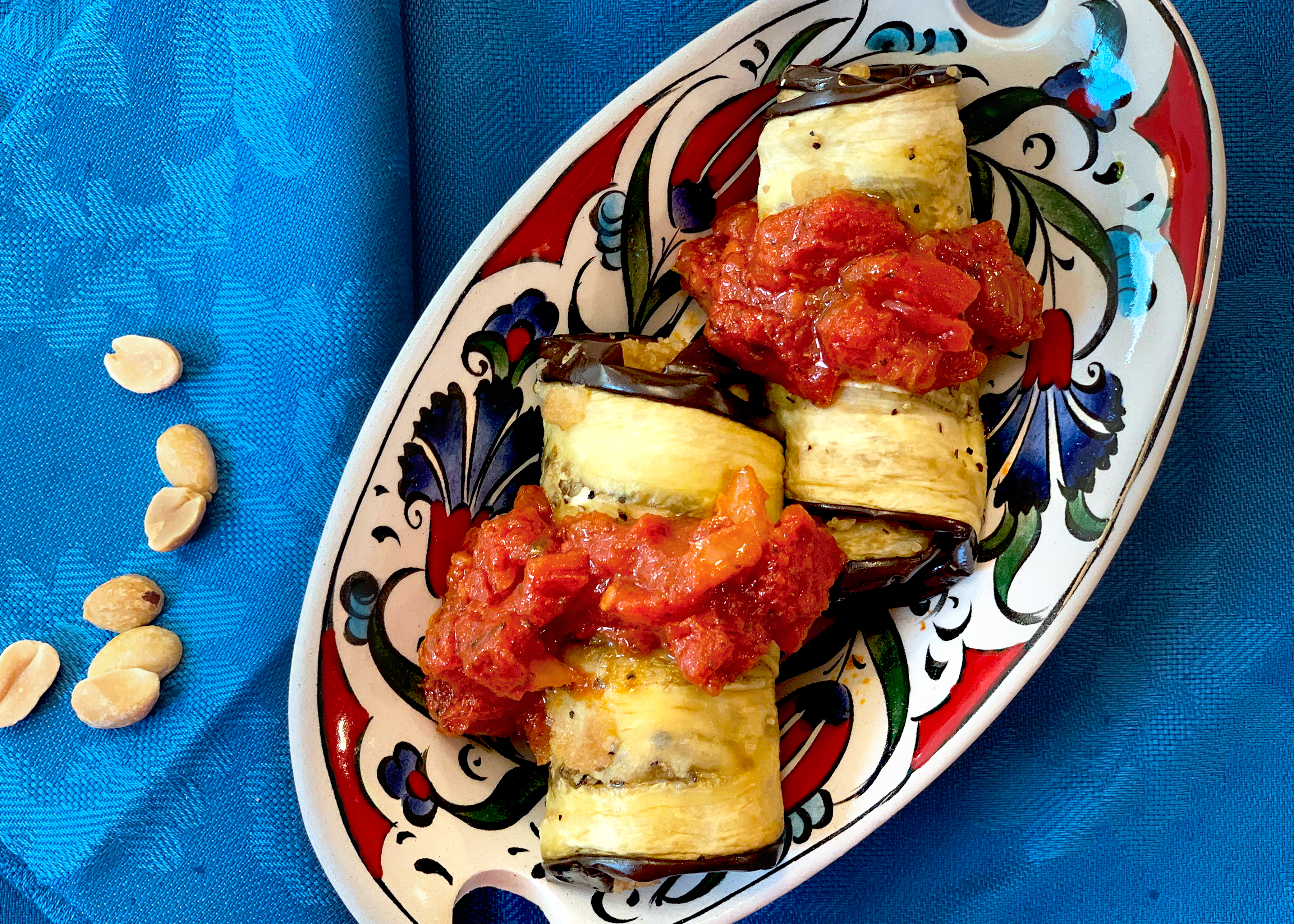 Turkey— Acili ezme is a Turkish vegetable salad, speciﬁcally, a mixture of ﬁnely diced tomatoes, cucumbers, peppers, chiles, scallions, fresh herbs, and spices that is often served with crisp pita chips. Ezme translates to squash/mash/crush in Turkish. It’s reminiscent of a Mexican salsa, albeit with a few additions, namely sumac and pomegranate molasses, both of which impart a pleasant fruity-tart ﬂavor. 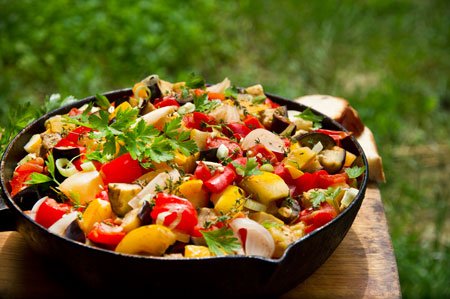 France— Ratatouille is a classic French stew made with fresh summer vegetables—including tomatoes! It perfectly encapsulates the Mediterranean ideal of saturating simple and healthy ingredients with olive oil and fresh herbs to highlight the produce’s natural sweetness. In this Provencal dish, ingredients such as tomatoes, summer zucchini, eggplant, green peppers, capers, onion, and garlic are chopped and sautéed in extra virgin olive oil and topped with herbes de Provence, salt, pepper, and fresh basil leaves. A perfect example of transforming common, humble ingredients into a ﬂavorful, hearty dish, ratatouille has emerged as a highly celebrated staple of the Mediterranean.

This is just tiny portion of the countless ways tomatoes can be prepared, but we hope it has inspired you to make the most of peak tomato season!

For more inspiration check out these pages:

10 Ways to Use Tomatoes

12 Great Ways to Use Tomatoes