As we head toward the new year, the northern half of the US is entering stew season, weather-wise.  However, no matter how warm it may be down south, there’s no reason to miss the pleasures of a hot, satisfying stew. 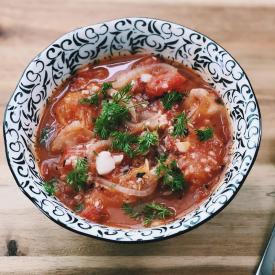 First of all, what is a stew?  And how it is diﬀerent than soup?

Stews and soups have plenty in common.  Both are cooked in liquid and are full of healthy and yummy vegetables, beans, meat and seafood, and they are both comforting, satisfying dishes. How they are prepared is where they diﬀer. In comparison to soups, stews are cooked longer over low heat and have less liquid. The result is that stews are much thicker.

In 2003, legendary cookbook author and longtime Oldways friend and colleague Paula Wolfert wrote The Slow Mediterranean Kitchen. In it, she explained:

“There’s just something about slowly cooked food—meats turning tender and succulent, fruits and vegetables ﬂavorful and satiny—that appeals to me. With slow-cooking, food products slowly mutate, ﬂowing from one form into another.”

If the word stew makes you only think of the classic American beef stew, look no further than the Mediterranean region for some additional, delicious stew inspiration.  After all, the Mediterranean Diet is known for combinations of healthy, delicious plant foods: vegetables, beans, whole grains, olive oil, herbs and spices, sometimes with smaller amounts of meat or seafood. To stew Mediterranean style, take your time in cooking, and perhaps take inspiration from Paula Wolfert, who also wrote, “some may apply the terms ‘comfort food’ and ‘homey food’ to my recipes for the North African tagine, French ragout, Spanish estofado,  Italian brusato,  and Eastern Mediterranean güveç. I just think of these stews as ‘slow-cooked’ for the way they allow me to enjoy the process of creating them, the sensuality of my results and the revitalization that occurs when I take deep pleasure in my cooking.”

The Moroccan or North African tagine is a great stew to start with, even if you don’t have the conical tagine cooking vessel in your kitchen.  The dish was named for the clay or ceramic cooking pot, which was used in North Africa by nomadic people as a portable oven.  The tagine is ﬂat on the bottom with a conical top, which makes it a wonderful slow-cooker.  As the food and spices inside the tagine are cooked, steam is created, which in turn, self-bastes whatever you’ve chosen to put inside, thus naturally enhancing the ﬂavor of the food.  While a tagine can be all vegetable, this method of cooking is ideal for meat or poultry because it slowly tenderizes them. Fruit and nuts are also added to tagines. In North Africa, tagines are often a communal dish, and can be served over couscous and with bread and an array of salads.  Paula Wolfert’s books have a number of tagine recipes, or try Moroccan Tagine with Prunes on Oldways’ recipe page. 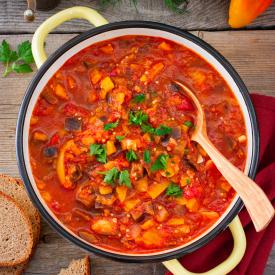 The name of a traditional Turkish stew, Türlü is a great guide for creating your own stews.  Türlü means various or “all sorts,” or whatever you have or is in season.  Türlü can include meat and it is a great vegetarian or vegan stew.  Like the tagine, it is important to have a great pot to cook a Türlü, and in Turkey, as mentioned by Paula, it is a güveç, an earthenware pot (also the name of the dish, pictured here). For the vegetarian/vegan version, vegetables are layered in the güveç or casserole, herbs added, and water is poured over the vegetables.  Cook over low heat for several hours, checking to make sure there is enough water, and it is not drying out.  Let the Türlü sit for a bit after taking it out of the oven, and as Paula suggests, let the ﬂavors continue to enhance one another. 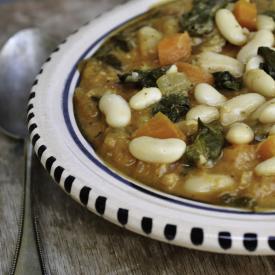 White beans, cannellini beans, navy beans, chickpeas, any kind of beans lend themselves particularly well to Mediterranean stew creation.  Since Tuscans are given the nickname of mangiafagioli (bean eaters), we recommend the classic Tuscan Ribollita, a wonderfully hearty and satisfying one pot meal.  Ribollita means reboiled, and in this case, cooked with day-old bread!

Heidi Swanson of 101 Cookbooks says Ribollita is ”the Tuscan stew you should be eating regularly.  It is a thick Tuscan stew— dark greens, lots of beans, vegetables, olive oil, thickened with day-old bread. The amount of kale you collapse into each pot is impressive, and you’ll be patting yourself on the back before, during, and after you eat”. Here are the details from Heidi—she says it’s a soup she makes constantly this time of year.

Mediterranean stews are a delicious way to coax vegetables, whole grains, and legumes into a cohesive dish that checks several nutritional boxes. Our Mediterranean neighbors intuitively understand that it is much easier to enjoy adequate servings of vegetables, legumes, and whole grains when they are incorporated into the main meal (such as a hearty stew).

With the season of colder (or cooler) weather ahead, Mediterranean stews are a great addition to your dinner table. The options are limitless, whether or not you are vegan or vegetarian, or choose to add meat, poultry or seafood.  Try one of the stews above, or try suggestions from Paula Wolfert and the Oldways recipe page.

Thomas
Hello to every one, it's actually a nice for me to go to see this web page, it includes useful Information.