Oldways in Normandy: The World is My Oyster

I’ll admit I thought visiting an oyster farm might be as exciting as watching paint dry. As far as I knew, oyster farming consisted of getting hold of some little baby oysters, sticking them in the water, then twiddling your thumbs for years while they grew big enough to eat. But in the tale unfolded by Richard Hennig, guide at La Calvadosienne oyster farm in Asnelles, Normandy, the whole process turned out to be a lot more complex and interesting than I ever imagined. In fact, the visit turned out to be a highlight of Oldways’ recent culinary trip, Normandy: Camembert and Calvados. 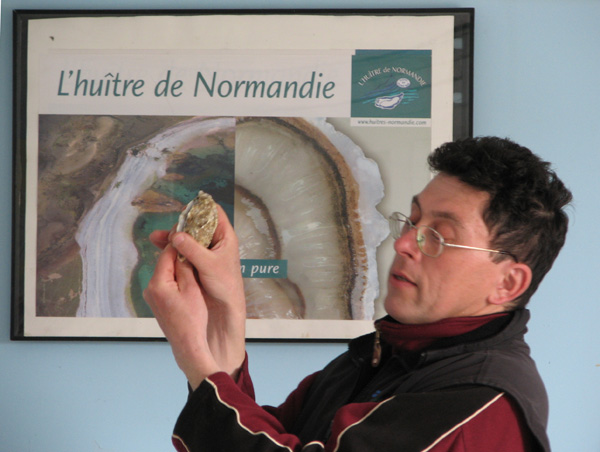 The oyster’s life cycle starts when the larvae are placed in a pool of sea water containing plastic tubes.  Within three weeks, each larva grows a “foot” and looks for something to attach to. Traditionally, baby oysters attach themselves to rocks, but oyster farmers have discovered that some alternative materials actually encourage more oysters to get established. After about six months, the baby oysters (called “spats” during this period) are stripped from the tubes – a procedure that needs to take place while the young shells are still able to recover from being yanked oﬀ the poles. Now the little oysters are put into mesh bags that are attached to rows of pilings stretching out into the ocean. The smallest oysters, just out of the nursery, are attached to the deepest pilings where they will only rarely be exposed to the air at exceptionally low tides, since the air stresses them. 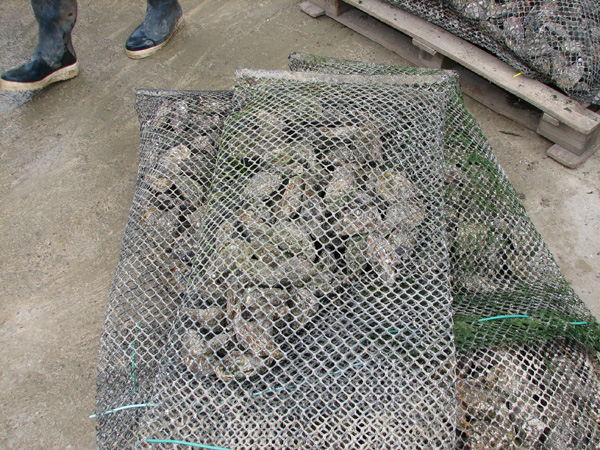 After three or four months, all the bags of little oysters are brought back to shore, where workers sort them by size (some have grown faster than others), clean them, return them to bags, and once again put the mesh bags back on the pilings. It takes an oyster three to four years to be ready to eat, and during this time, it will make about ten trips back to shore, returning every three or four months for cleaning, sorting, and rebagging. As it gets bigger, the oyster “graduates” from the deepest pilings to those in the middle of the oyster farm, where it receives a balance of seawater and air as the tides go in and out. Then, as it nears full size, it will ﬁnally be placed in bags on the shallowest pilings, where it will spend many hours each day exposed to the air. “This makes the muscle of the oyster big and strong,” explains M. Hennig – making for a larger, more succulent oyster to eat. 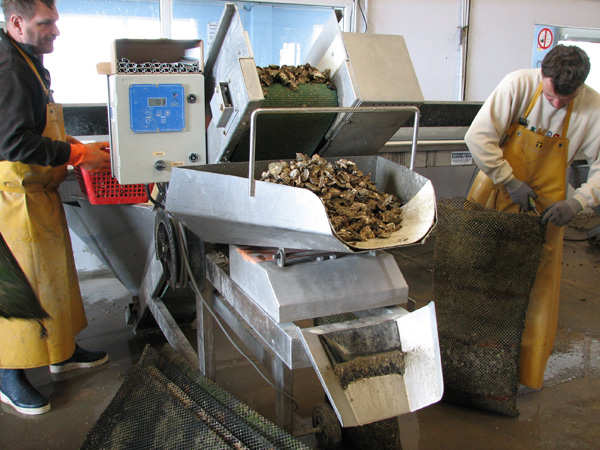 France produces 95% of Europe’s oysters, and for La Calvadosienne and all the many other oyster farms all along France’s coastline, there’s a diﬃcult juggling act to perform once the oysters near maturity. “Sixty percent of the oysters grown in France are consumed in two weeks at Christmas,” says M. Hennig, “So we have to have everything ready for the big rush.”  Come December, the shallowest pilings are crowded with bags, and holding tanks on shore stand ready to provide a ﬁnal day of fasting in ﬁltered sea water, which cleans the oysters’ stomachs of any remaining food. 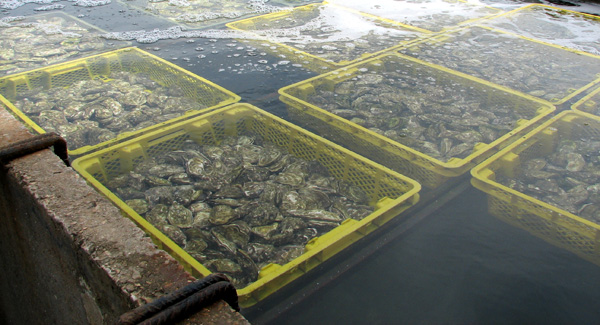 La Calvadosienne sells more than 300 tons of oysters each year. Once you know that each oyster has to be carted back and forth to the beach, and cleaned and rebagged ten times, you can understand why the place is a beehive of activity, when all this must be done by about two dozen workers (including 20 disabled workers hired under a sheltered workshop program). As we watch, crews empty bags of oysters into a machine that sorts them by size and weight, while others clean the oysters and put them back into bags. This is not one of those factory tours where the visitors are penned behind glass partitions: we’re in the middle of it all, dodging workers and forklifts, jumping to avoid a deluge of seawater on our shoes. As we walk to the beach to check out the actual oyster-farm pilings, tractors pass us, coming and going between the tidal ﬂats and the processing building, pulling ﬂatbed trailers with crews of workers lolling brielfy over mesh-bagged oysters.  We aren’t the only ones heading for the beach at low tide: families pass us with kids carting buckets and shovels, and several men saunter by with large nets that M. Hennig explains are for shrimping, a popular local activity. 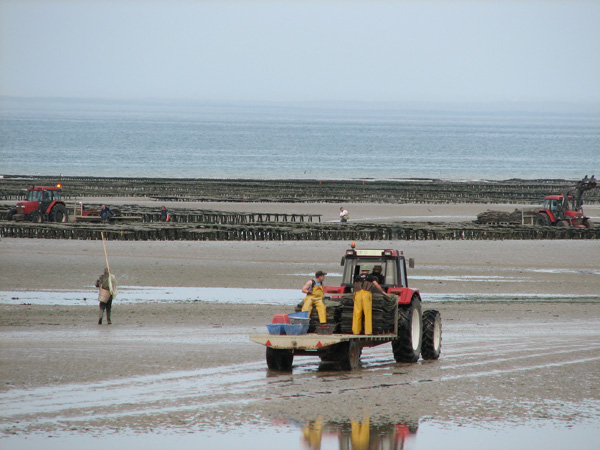 While we think of aquaculture as a relatively recent development, it turns out that oyster farms have been popular since the ancient Greeks started culturing oysters on clay tiles and Roman oyster farms are in fact pictured in murals at Pompeii. Oyster farming was lost during the Dark Ages, but re-established in the 17th century when demand for oysters outstripped the wild supply. In the 19th century, oyster farming was a booming business in France, at a time when Paris alone consumed over a million oysters a day (often as many as 100 at a time by some individuals, according to M. Hennig). Oyster farming, unlike some kinds of land- and sea-farming, is a positive ecological force. Like most bivalves, oysters actually ﬁlter pollutants out of the water; their presence is crucial to maintaining environmental balance along our coasts. What’s more, oysters are extremely quick to grow and multiply ­­– a fact that has helped France ostreiculture (oyster farming) recover from two recent near disasters. In the record-cold winter of 1962-63, the sea actually froze, and 90% of European oysters died. Just as the industry came back to normal in the early 70s, almost 99% of the oysters were wiped out by sickness. This epidemic led to a Europe-wide ban on the Portuguese oyster, which is prone to illness, and today 95% of France’s oysters – including those at La Calvadosienne – are Japanese oysters, with the remaining 5% native Belon oysters. Now, when oyster farms are once again booming, the latest danger is oyster pirates, who swoop in at night and steal the bags of oysters, according to a recent New York Times article. 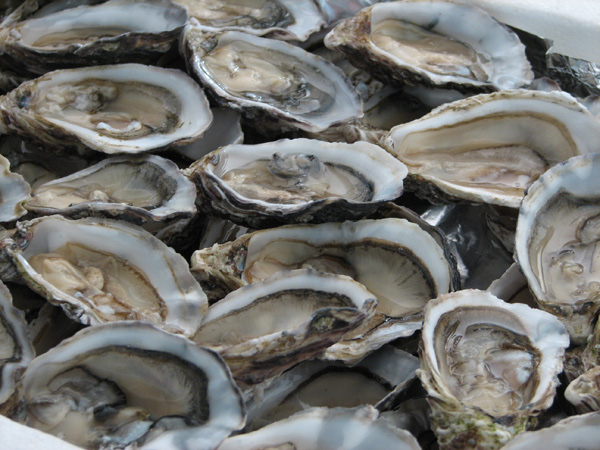 Watching the whole process has given us an appetite, and it’s time to try the best that La Calvadosienne has to oﬀer. Sixty oysters, just opened by the farm’s staﬀ, appear before our eyes, with lemon juice or vinaigrette for dipping. One of our more resourceful group members pulls a few bottles of Muscadet and some plastic glasses out of thin air, and we sigh with pleasure as we enjoy the briny cool freshness of the oysters for which Normandy is so renowned.  — Cindy