Oldways in Normandy: How to Make Poulet Vallée d’Auge and Tarte Tatin

There are few meals more evocative of Normandy than Poulet Vallée d’Auge and Tarte Tatin – chicken and mushrooms in a Calvados cream sauce, followed by a richly caramelized apple upside-down tart.  And there are few Americans who know how to make these dishes better than Susan Herrmann Loomis, noted cookbook author, Friend of Oldways, and proprietor of her own cooking school in Normandy.  Susan shared her secrets with us on our recent Normandy: Camembert and Calvados culinaria trip, and today we’re going to pass the wisdom on to you. “The Tatin sisters had an inn, “ Susan begins, giving us the back story, “and one day the sister who did the baking forgot to put the pastry in the bottom of the pan before she added the apples. She placed the crust on top halfway through the baking, then turned it upside down afterwards, hoping no one would notice – and Tarte Tatin was born.” 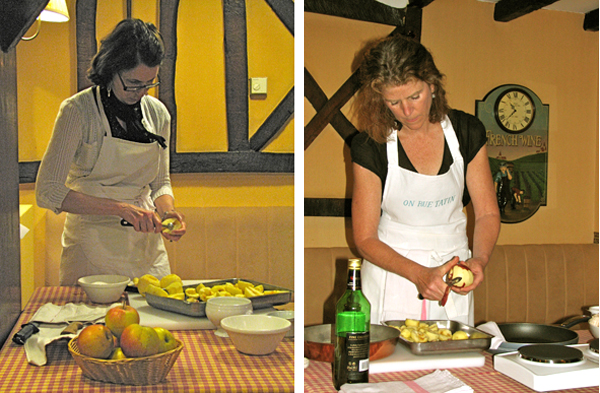 We’re almost out of time to enjoy Tarte Tatin, Susan tells us as she and volunteer assistant Maryanne Muller (on left above) peel, core, and halve ﬁve pounds of Royal Gala apples. Apple season starts in August, and by May, last year’s apples are getting too old to eat, so Susan never makes the dish from May to August. The calendar says April 29 the day of the demo, so we breathe a sigh of relief. As Maryanne continues preparing the apples, Susan starts the pastry, a traditional French pâte brisée.  She starts with one and a half cups of unbleached all-purpose ﬂour, adds a pinch of salt, then 7 tablespoons of cold butter, all of which she pulses together in a food processor until it has the texture of coarse cornmeal. Then she adds cold water “I can’t say how much – maybe up to about a half cup” until the dough is “quite damp,” a consistency that leads to tender pastry. She leaves the pastry in a rounded ball, covered with a bowl, for anywhere from 30 minutes to three hours. 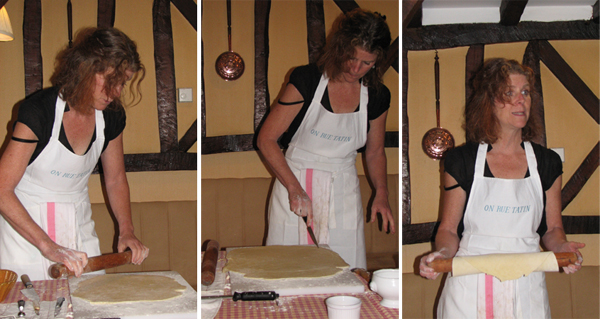 Susan exhorts us not to put the pastry in the fridge, as most recipes advise. You need to let the dough’s stretchy gluten relax, but if you chill it now, it won’t roll out easily later. “That’s why most people don’t bake. They follow stupid directions and when it doesn’t work out they think they’re idiots,” Susan comments, shaking her head. Her way makes so much sense: let the dough rest, roll it out when it’s warm and relaxed, then chill the raw pastry so that the little bits of cold butter will create ﬂaky air pockets in the crust as it bakes. With the crust under control, Susan turns her attention to cooking the apples. She places about a cup and a half of sugar in her copper Tarte Tatin pan (assuring us we can use a cast-iron fry pan at home), and covers the sugar with ten tablespoons of good Norman butter, in thin slices. (If you’re mentally adding up the butter, yes, there’s a lot – but the ﬁnished tarte serves 8-10 people and is meant for special occasions only.) Now she places apple halves in the pan, stem side down, all around the rim. The butter helps them stand at attention while she adds more apples, urging us to “pack them as tightly as you can.” Once the pan is full of apples, she turns the heat on medium-low to begin the caramelization process, which takes at least an hour. 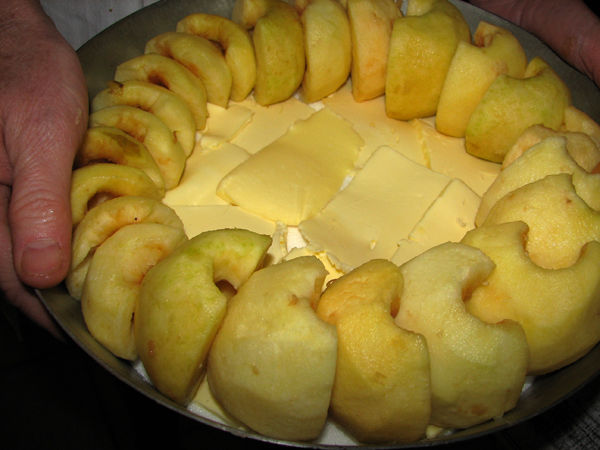 Now, it’s time to start the chicken. “It’s just interesting, to most Americans, to realize that chickens have heads,” Susan muses, as she holds up the farm-raised bird that Franck Manchon-Desrivieres of La Fringale restaurant in Bayeux, Normandy has purchased for us that morning. Its beady eyes stare intently at us. “Traditionally, poultry brains have been regarded in France as a real treat – saved for the youngest or oldest person in the household.” We look on incredulously as Susan tells us of the time she was visiting a friend whose twelve year old waltzed through the kitchen, spotted a cooked chicken head, and scooped out the brains with a satisﬁed sigh. 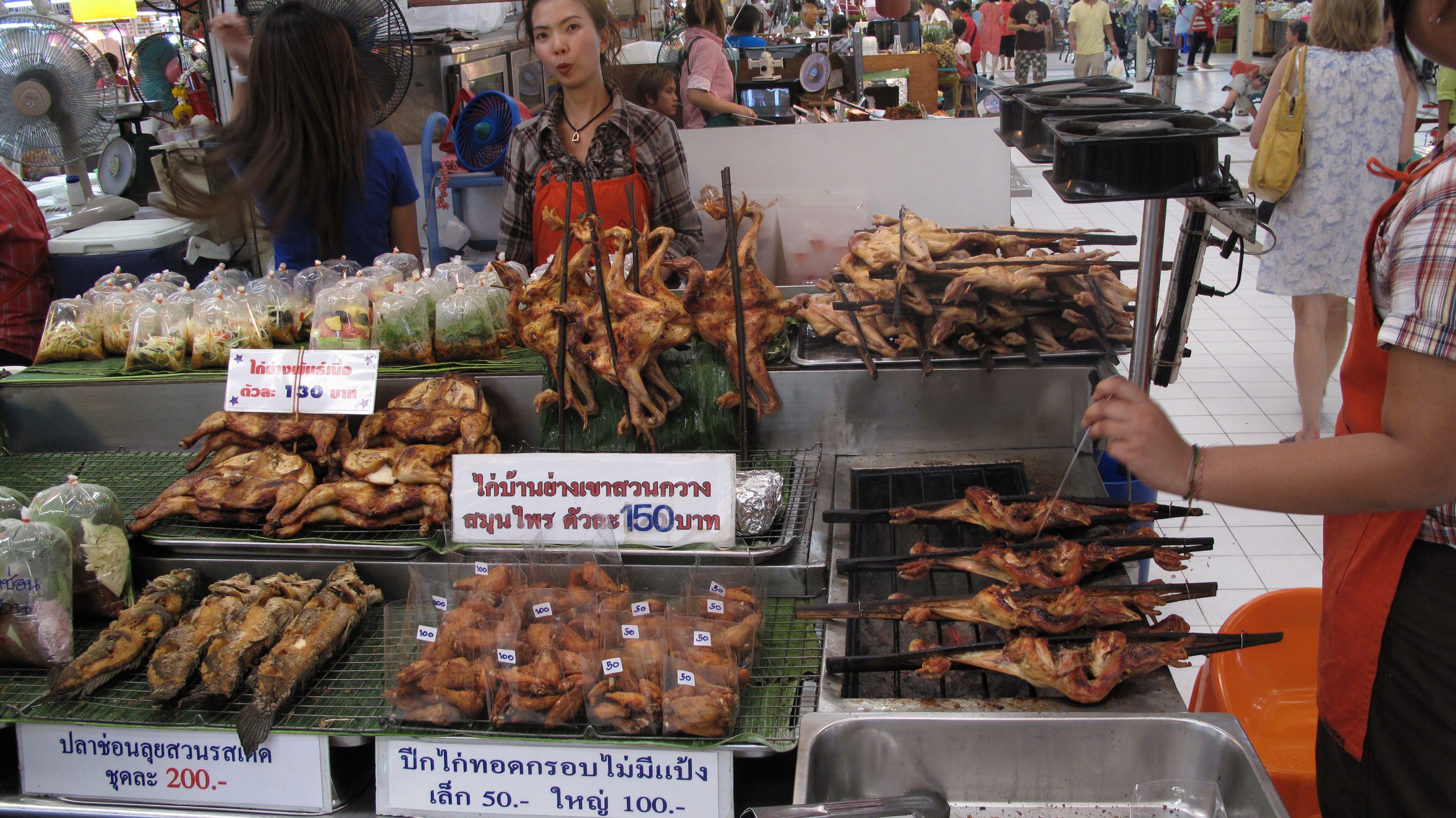 But brains, fortunately, are not part of Susan’s recipe today. She handily cuts up the whole chicken – “it’s easier if it’s cold” – removing the legs and thighs, then the breasts and the back. A chicken typically supplies seven servings: two each of drumsticks, thighs and breasts, plus the back, which yields a surprising amount of meat including the succulent “oysters.” In another large skillet, Susan browns the skin side of the chicken pieces in a little butter (“you could use oil but this is Normandy”) to develop the ﬁrst layer of ﬂavor. French cooking, she explains, often involves many steps, and each step is important for creating another layer of ﬂavor. Skip any steps, and your dish may turn out disappointingly one-dimensional. 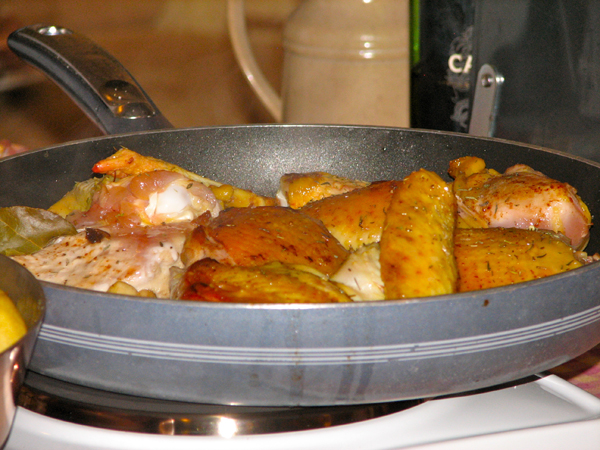 Susan has prepared all her ingredients ahead of time, a practice the French call “mise en place” which translates literally to “put in place.”  She strongly advises following all recipes this way, to speed the actual cooking process and to ensure nothing is left out. Today, her other prepared ingredients include 8 ounces of cleaned and diced button mushrooms, a minced shallot, a cup of crème fraîche, ⅓ cup of Calvados, a little thyme, a bay leaf, some sea salt, and pepper. The white mushrooms, we learn, are called champignons de Paris, traditionally cultured in the egouts of Paris. (Having lost some of us on the chicken brains, Susan diplomatically leaves out translating egouts as sewers.) Bay leaf and thyme are the two herbs most commonly used in Norman cooking, with tarragon following close behind. Most people  in Normandy grow these herbs near the kitchen, with the ﬁrm belief that thyme “likes company” and especially thrives in heavily-traveled areas. We should make sure to get imported bay leaves, says Susan – perhaps from Turkey – rather than California ones, for the right ﬂavor. And crème fraîche is the top cream of the milk, “an absolute staple of cooking here.” But we can use non-ultrapasteurized heavy cream if we can’t get crème fraîche at home. 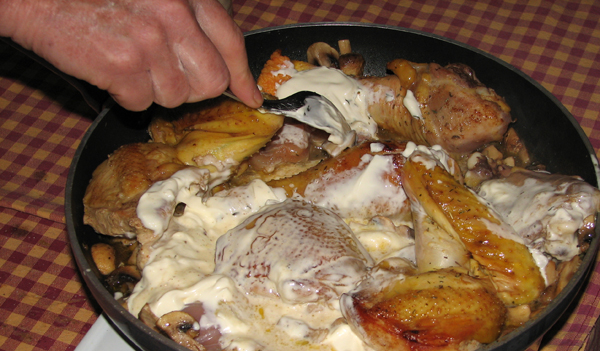 By now the butter and sugar under the Tarte Tatin apples has melted, and Susan stops to baste the upper sides of the apples in the rich caramelized syrup that ﬁlls the bottom of the pan. “Julia Child came up with the idea of using a turkey baster for this. It’s so much easier than trying to get a spoon in among the apples to redistribute the juices,” says Susan. She and Sara break out in conspiratorial laughter, as Susan holds up the substitute “baster” they found that morning at a pharmacy, since American turkey basters aren’t sold in France. 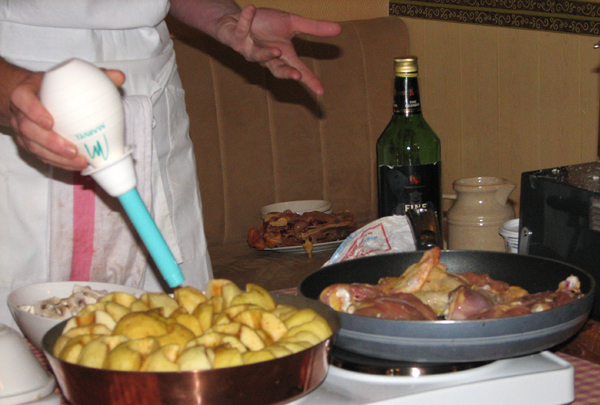 The chicken pieces have ﬁnished browning during the apple-basting, so Susan adds the mushrooms and herbs to her Poulet Vallée d’Auge, and continues cooking for a few minutes until the mushrooms soften and begin to give up their liquid. Now it’s time to add the Calvados, while lifting the chicken pieces so the apple brandy can run under and around them, and then scraping the bottom of the pan. The air, at this point, is thick with good smells, piquing our appetites and making us long for lunch. Susan explains that she will now put the chilled pastry over the cooked apples, and bake the tarte in a 425°F oven for 25 to 30 minutes, until the pastry is golden. She’ll also cook the chicken for another ﬁfteen minutes, add the cream and continue cooking for another 5-8 minutes until the chicken is cooked through, then remove it to a platter so she can cook the sauce ﬁve more minutes until it thickens. 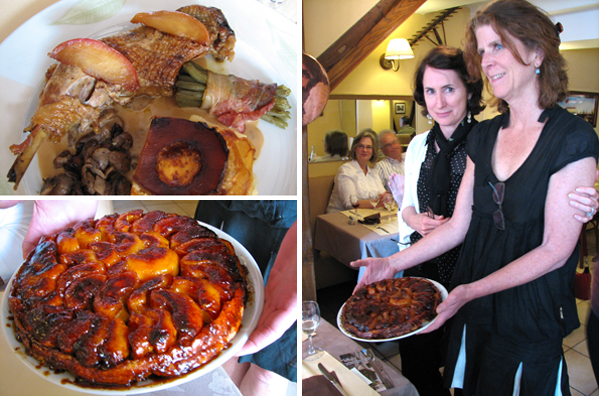 Luckily, we don’t have to wait for these ﬁnishing touches. The kitchen staﬀ at La Fringale has already completed twenty-eight servings of these same dishes, using Susan’s recipes, and we are ushered into the adjacent dining room to taste what our eyes and noses have already been feasting on for more than an hour.  Life is good. The recipe for Tarte Tatin – along with other recipes and stories about her move to France – can be found in Susan Herrmann Loomis’ book On Rue Tatin. - Cindy

albert rose
Why do so many American "cooks" plagiarize the work of Julia Child? And why do none of them tell us a suitable accompaniment?
Cynthia
There's emulation and inspiration on one side of that question, and plagiarization on the other, Albert! The lovely lunch described above may have had parts inspired by Julia Child but I don't see any plagiarization here. Julia Child wrote her books fervently hoping that Americans would use her knowledge to become better acquainted with traditional French recipes. Susan Loomis, the experienced American chef featured in this blog, learned from Julia Child's work and from countless other French chefs and cooks over the many years she has lived in France and taught cooking there.
John Olexa
Looks good. Would like to try cooking this dish.