Here at Oldways we’ve been keeping tabs on the astonishing number of new books coming along that extoll the virtues of a plant-based diet.  As we make plans to revise our Vegetarian Diet Pyramid in the near future and launch a new program called the Vegetarian Resource Network, we’ve started to connect with the cooks behind some of the newest books. We recently caught up with Michael Natkin, author of award-winning Herbivoracious.
cookbooksQ & A 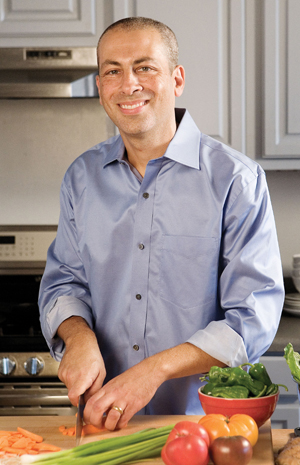 Here at Oldways we’ve been keeping tabs on the astonishing number of new books coming along that extoll the virtues of a plant-based diet.  As we make plans to revise our Vegetarian Diet Pyramid in the near future and launch a new program called the Vegetarian Resource Network, we’ve started to connect with the cooks behind some of the newest books. We recently caught up with Michael Natkin, author of award-winning Herbivoracious.

OLDWAYS: What’s the ﬁrst meal you remember eating that was deliberately vegetarian?
MICHAEL: I grew up in Louisville, Kentucky in the 1970s. Vegetarian food wasn’t exactly a big thing. I actually ate at McDonald’s every day. When my mom became sick with breast cancer, she was trying a macrobiotic diet and so I started learning how to cook that to support her, and my girlfriend at the time was vegetarian as well. So I literally went from omnivore to lacto-ovo vegetarian overnight. I don’t remember what my ﬁrst intentionally

vegetarian meal was, but I seem to recall there being a lot of lasagna and enchiladas at the time!

OLDWAYS: Have you noticed a growth in all things vegetarian in Seattle over the past two years? Can you give us some examples?
MICHAEL: I think the exciting thing these days is that delicious vegetarian dishes are more commonly found on good restaurant menus at all price points. Chefs are putting real eﬀort into these oﬀerings, not just putting together all the side dishes from the meat plates, or making a sad pasta in a beurre blanc. For example, if we go to Canlis, which is one of the best and most upscale restaurants in the city, I can have a multi-course vegetarian tasting menu that is beautiful, original, and thoughtful. At the other end of the spectrum, I can hit Po Dog and have a fantastic Field Roast sausage in place of the meat on any of their delicious dogs.

OLDWAYS:  What advice would you give to a carnivore who wants to get more plant foods into his or her daily meals?
MICHAEL: I would just say to start gradually. Try to eat one or two meatless meals a week, or even just increase the amount of vegetables and grains and lower the amount of meat in meals you already love. The best thing you can do is become comfortable cooking cuisines other than standard “American food” — many other countries have styles of cooking that use less meat without compromising ﬂavor, because they don’t focus on a big roast or chop in the middle of the plate.

OLDWAYS:  The collection of recipes in Herbivoracious has a wonderfully international ﬂavor. Which country’s cuisine has had the biggest impact on your cooking, and why?
MICHAEL: Oh, man, I don’t think I can pick just one. I tend to fall in love with a cuisine and want to learn all about the ingredients, techniques, and popular dishes, and then cook it obsessively for awhile. Eventually it becomes a part of my repertoire and I feel comfortable improvising within it and cross-pollinating with other cuisines. In the past that I would say I’ve gone through major fascinations with the food of Mexico, China, Italy, Japan, Korean, Thailand, all the various countries of the Middle East… there is just so much to explore!

OLDWAYS: Can you share with us a few techniques you’ve learned along the way that you wish you’d mastered earlier?
MICHAEL: I think the basics that every cook should work on to improve their cooking are knife skills, seasoning, and control of heat. I’ve been cooking seriously now for almost thirty years and I’m constantly trying to improve on those basics. As far as new techniques, I’m working now at ChefSteps.com where we are teaching people to cook sous vide — and there is no doubt that gaining full control over temperature is improving my cooking.

OLDWAYS: Can you give us permission to include your recipe for Brussels Sprout and Apple Hash?
MICHAEL:  Of course!

Brussels Sprout and Apple Hash
Many variations are possible. You could add toasted pecans, hazelnuts, or dried cherries; change the champagne vinegar to apple cider vinegar, sherry vinegar, or orange juice; or even replace the apple with a crisp pear. 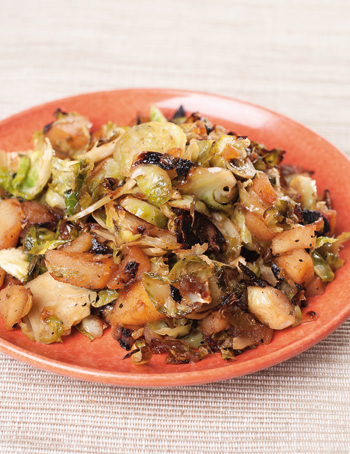 Directions:
Melt the butter in a large skillet over medium heat. Add the onion and a pinch of salt and cook until beginning to brown, about 4 minutes.

Add the apple and a pinch of salt. Raise the heat slightly and cook, stirring occasionally, until the apple starts to brown, about 2 minutes.

Add the Brussels sprouts, a big pinch of salt, the sage, and rosemary, and cook, stirring occasionally, until the sprouts are wilted and well browned, about 10 minutes.

Add the champagne vinegar and honey and toss to coat, scraping any delicious browned bits from the bottom of the pan. Taste and adjust the seasonings; it will likely need more salt, and you may also want to add more honey or vinegar to suit your taste. Serve hot.