I like to think of myself as a smart food shopper. I know how to sniﬀ melons and gently squeeze avocados in the palm of my hand to judge ripeness. But last week, this useful tip from the Paciﬁc Sardine Association in British Columbia sent me into new territory:

“When buying fresh sardines, conduct the “clock test” to assess the level of freshness:

I couldn’t wait to ﬁnd some sardines to test. A girl can never have too many kitchen skills. And lately, ﬁsh is on my radar. I try to eat ﬁsh or seafood twice a week. Plus, there’s a buzz in sustainability circles that we can all help the planet by eating small whole ﬁsh. Think sardines, herring, anchovies – they’re heart-healthy fatty ﬁsh and inexpensive sources of omega-3s, which makes them good brain food.  I’ve stocked my pantry with canned little ﬁshies, but had never cooked a fresh one.

I had the good luck to run into Guida Ponte, a chef at Verrill Farm in Concord, Mass., who comes from Portugal.  Our talk turned to sardines and she told me that small fresh ones are grilled throughout Portugal during the Sao Joao Festival, where they’re served with piri-piri sauce.

Next, the spice gods intervened. On a trip to a local spice shop to buy cardamom, I discovered a jar of piri-piri – ground bird’s-eye chili – the very same spice Guida had told me about a day before.  So, I brought it home and made the sauce. 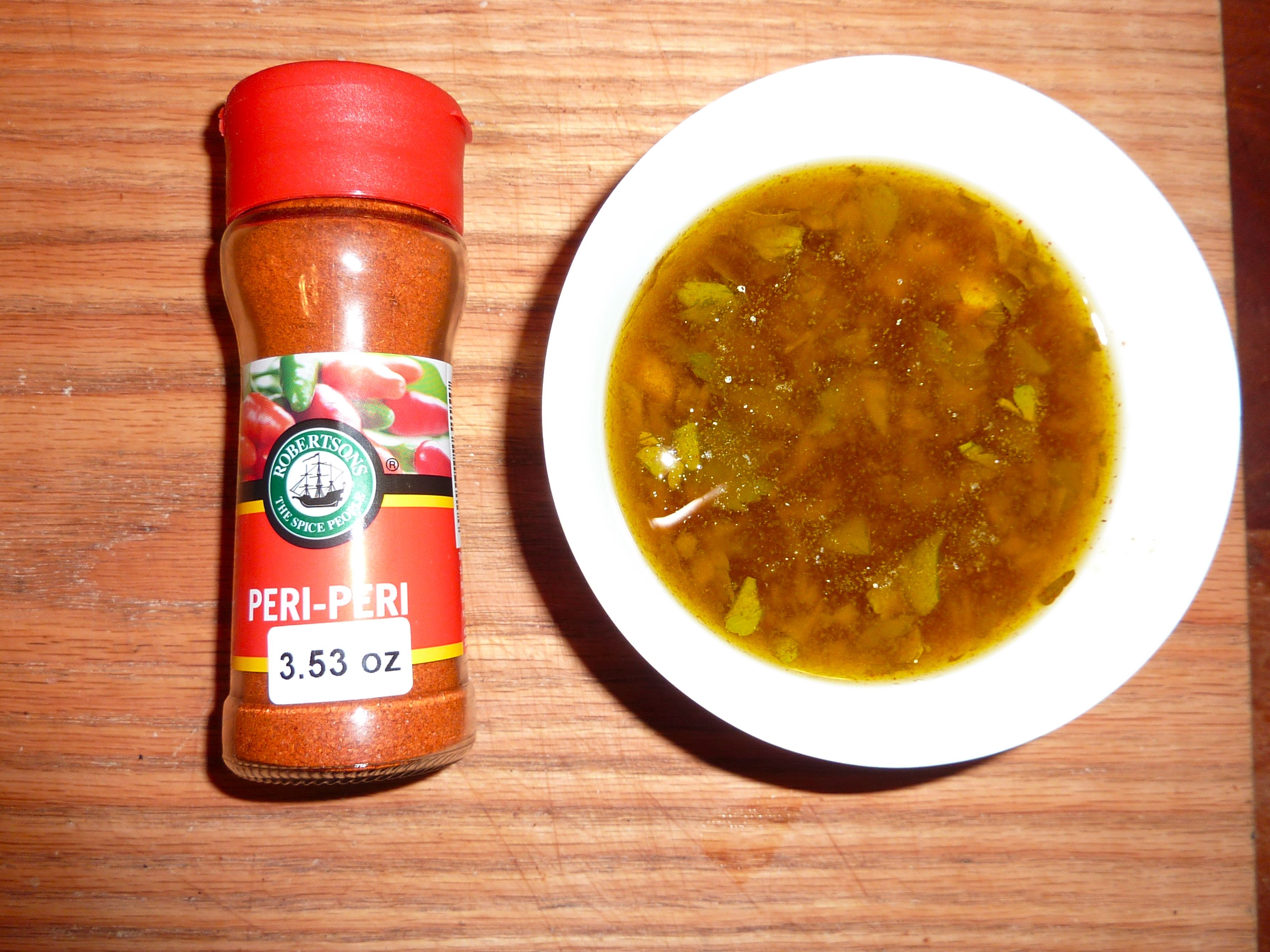 Now I had to get my hands on some fresh sardines. Unfortunately, I learned that they’re seasonal, and the season around Boston ends in March. But the ﬁshmonger urged me to try Spanish mackerel. He had about a dozen whole ones on ice, about 12 inches long, looking nice and ﬁshy. They’re a little bigger than sardines, but he said they’d behave the same way on the grill. I pointed to one and asked him to clock test it. I ﬁgured he wouldn’t want to me grab one of his ﬁsh.  He got into it, and actually tested several. They were all good for 1 o’clock, so I bought one. It was just under a pound. The cost? $4.55.

He asked if I wanted him to clean if for me. I said sure.

I brought it home, nicely wrapped in white paper. Next, I got a ﬁre going in the grill. As soon as I opened the package, the ﬁsh became “him.” A small ﬁsh with a head and a tail has a lot more personality than a ﬁllet.

I rubbed the grill grate and the ﬁsh with olive oil, and put the ﬁsh on the magniﬁcent ﬂounder plate my brother gave me for Christmas one year. 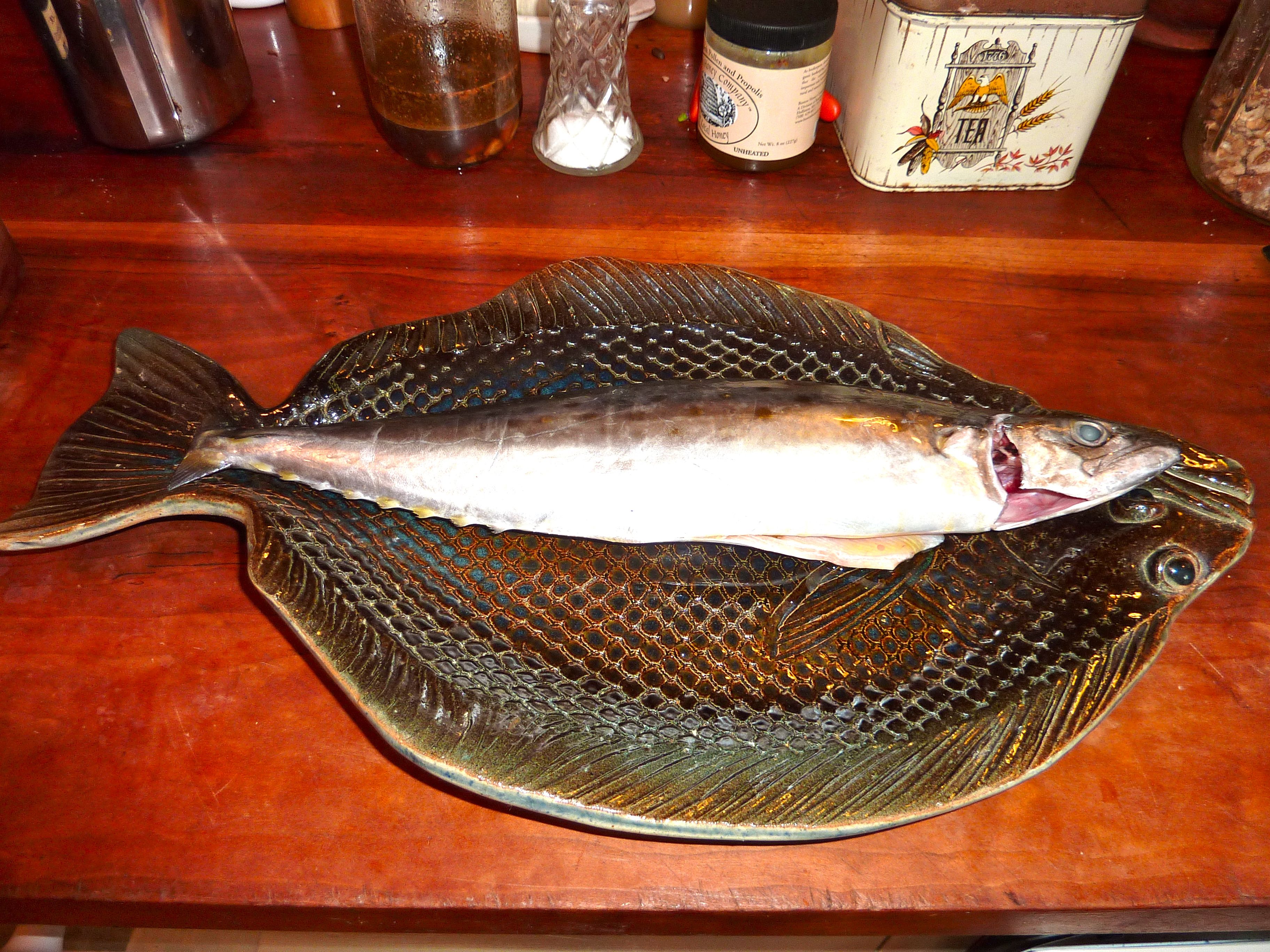 I heated the oven to 450°F, cut up a sweet potato and three fennel bulbs, tossed them in olive oil, and arranged them on a baking sheet, along with a bunch of asparagus that I also drizzled with olive oil.  I put the vegetables in the oven to roast.

When the coals were nice and hot, I put ﬁshy on the ﬁre, let him cook for about four minutes, turned him over using a big spatula, and let him go for another four. He smelled fabulous. I scooped him up, put him back on the platter, brought him into the house, and turned to my husband. “Head or tail?” I asked. He chose the head. 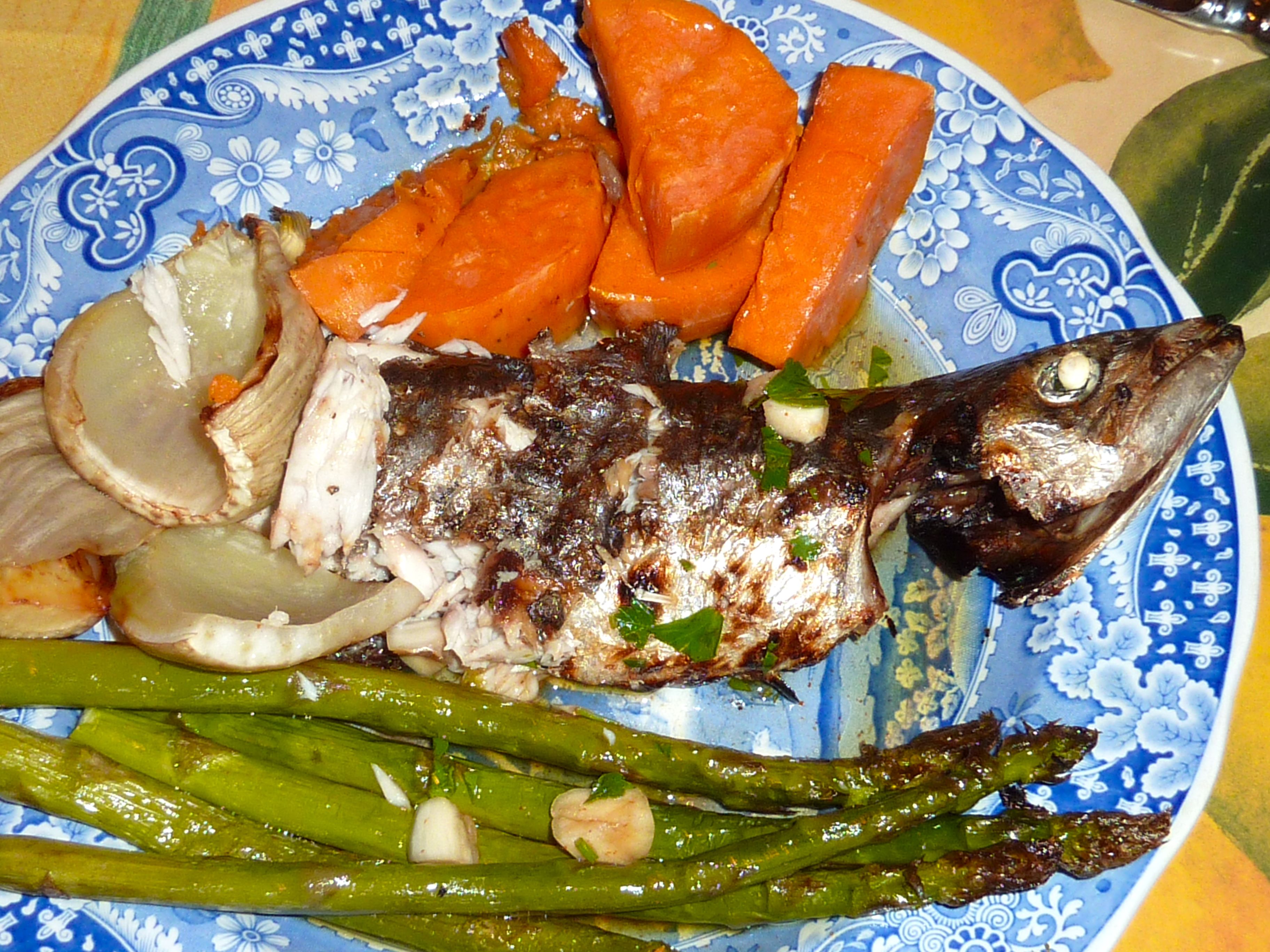 Here’s his plate. We ate our mackerel with piri-piri sauce, the roasted veggies, and a piece of whole-grain bread. Yum. He was the ﬁrst little whole ﬁsh I’d ever grilled. He won’t be the last.

*My apologies to all the Portuguese cooks who will shake their heads at my version of this classic condiment. I chose to tinker with it, and advise you to play with the ingredients to come up with a version you love. The sauce is a great accompaniment for Spanish mackerel, or other ﬁsh with a delicate ﬂavor. I like it on rice or vegetables, too.

Combine all ingredients in a jar with a tight-ﬁtting lid and shake until blended. Add more piri-piri, vinegar, or olive oil as you wish, to come up with a nicely hot and ﬂavorful combination.