A week ago, my colleague Sarah Dwyer wrote for the Whole Grains Council blog about the whole grains she found at the Copley Square Farmers’ Market just a few blocks from Oldways’ Boston oﬃce. Her quest inspired me to look around at my own Portsmouth, NH Farmers’ Market for local whole grains.

The Portsmouth Farmers’ Market, shown above, is a thriving market that opens the ﬁrst week of May and runs through the end of October each year. Forty-nine farms and artists sell their wares at the weekly market, which is always a riot of color with aisles clogged by neighbors chatting and children dancing to this week’s musicians. I go there weekly, and thought I knew everyone who sold anything whole grain (after all, it’s my job to be aware of these things!) But even I was surprised by what I noticed when I went from stall to stall speciﬁcally looking for whole grains. 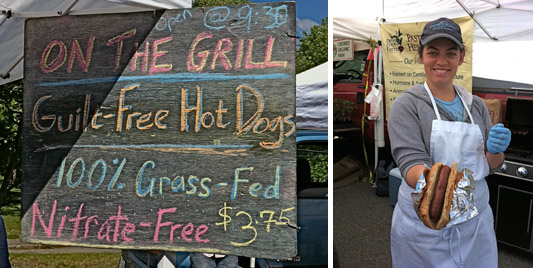 First to catch my attention was New Roots Farm, run by Jeﬀ and Renée Cantara in Newmarket, NH. We ﬁrst met Jeﬀ and Renée years ago, when our son Sam was an intern at the farm they were managing. Now they’ve bought their own farm, and diversiﬁed from their original veggies to include wonderful natural meats. This year, in addition to selling frozen meats, they’ve set up a grill, where they sell what they advertise as “Guilt-Free Hot Dogs” – real heritage breed meat raised on a rotational grazing system, no nitrates, whole grain buns, and HFCS-free condiments.  Looks good to me, but 9:30 am just isn’t hot-dog time for my tummy. 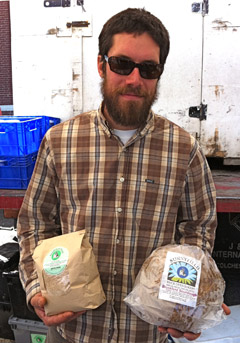 Next door to Jeﬀ and Renée was the stall of Brookford Farms, where Peter Long was oﬀering whole wheat ﬂour and bread from Luke and Caterina Mahoney’s Rollinsford, NH organic farm. Brookford is primarily a dairy farm, and we got hooked on Brookford’s wonderful creamy fresh yogurt about three years ago. We were delighted when they started growing their own grain more recently. The Mahoneys see their grain as a key part of the natural cycle of dairy farming. First they grow clover on the land, to ﬁx the nitrogen so no synthetic fertilizers are needed, and to pasture their livestock. Then they grow wheat or spelt, turning the grain into ﬂour and the straw into bedding for their animals. Finally their chickens enjoy the land, fertilizing it further and picking up any stray grain.

Brookford oﬀers three kinds of bread to the public – Sourdough Hearth Loaves, 100% Brookford whole wheat loaves, and Brookford Sesame loaves – while their CSA members can also get pizza dough and pie crust made from Brookford’s home-grown wheat. We bought the Sourdough this morning, and will enjoy it with lentil soup for supper tonight. 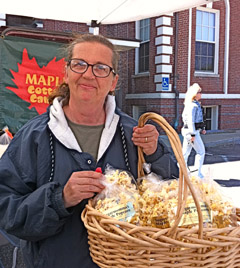 One stall I almost didn’t stop at was Sugarmomma’s Maple Farm. Yes, I’m proud that New Hampshire makes great maple syrup (why does Vermont get all the credit?) but what could a maple farm oﬀer that was whole grain? There it was! Maple popcorn. Too many people forget that popcorn is a great whole grain. Deb Locke, shown here, is the Sugarmomma herself; with her husband Ron she owns the Northwood, NH farm. We think of maple syrup as just another form of sugar, but recently University of Rhode Island researchers specializing in plant medicine discovered that maple syrup contains anti-oxidant compounds with anti-cancer, anti-bacterial and anti-diabetic properties. Looks like real maple syrup may have a health edge on the imitation stuﬀ! 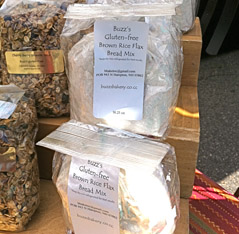 I also came close to overlooking Buzz Bomb World Spice Blends. This small company, from North Hampton, NH, started out oﬀering just what their name implies — spice blends, made from organic, non-irradiated spices. But along the way, owner Steven Scaturro found he had celiac disease, and decided to satisfy his need for delicious, gluten-free baked goods by developing his own recipes. He still makes and sells the spice blends, but now he’s also opened Buzz’s Bakery and Take-Out Cafe in neighboring Hampton, NH, where he oﬀers a wide range of gluten-free breads, rolls, coﬀee cakes and other goodies. This morning he had some of his fresh breads, some granola, and also some Brown Rice Flax Bread Mix.

Forty Five Market Street specializes in yummy desserts (whoopie pies are big in this corner of the world) and hasn’t done much in the past with whole grains. But in yet another indication that the tide is turning, they had a good supply of whole rye bread today. Me and Ollie’s, on the other hand, has always been known for their whole grains. Each day, they freshly grind wheat from Whole Grains Council member Montana Flour and Grains to make their bread, which is the daily bread chez Harriman.  And their whole grain brownies are awesome. We hope they start a trend.