Tomato Traditions of the Mediterranean Diet

When it comes to summer vegetables, nothing may be more eagerly anticipated than perfectly juicy, locally-grown, ripened on the vine, bursting-with-ﬂavor tomatoes. With more than 3,000 varieties of heirloom or heritage tomatoes and more than 15,000 known varieties, the possibilities are endless. Cherokee purple, brandywine, green zebra, Amish paste, Amana orange, black krim, black cherry, etc. are just a few of the countless varieties for your eating pleasure. 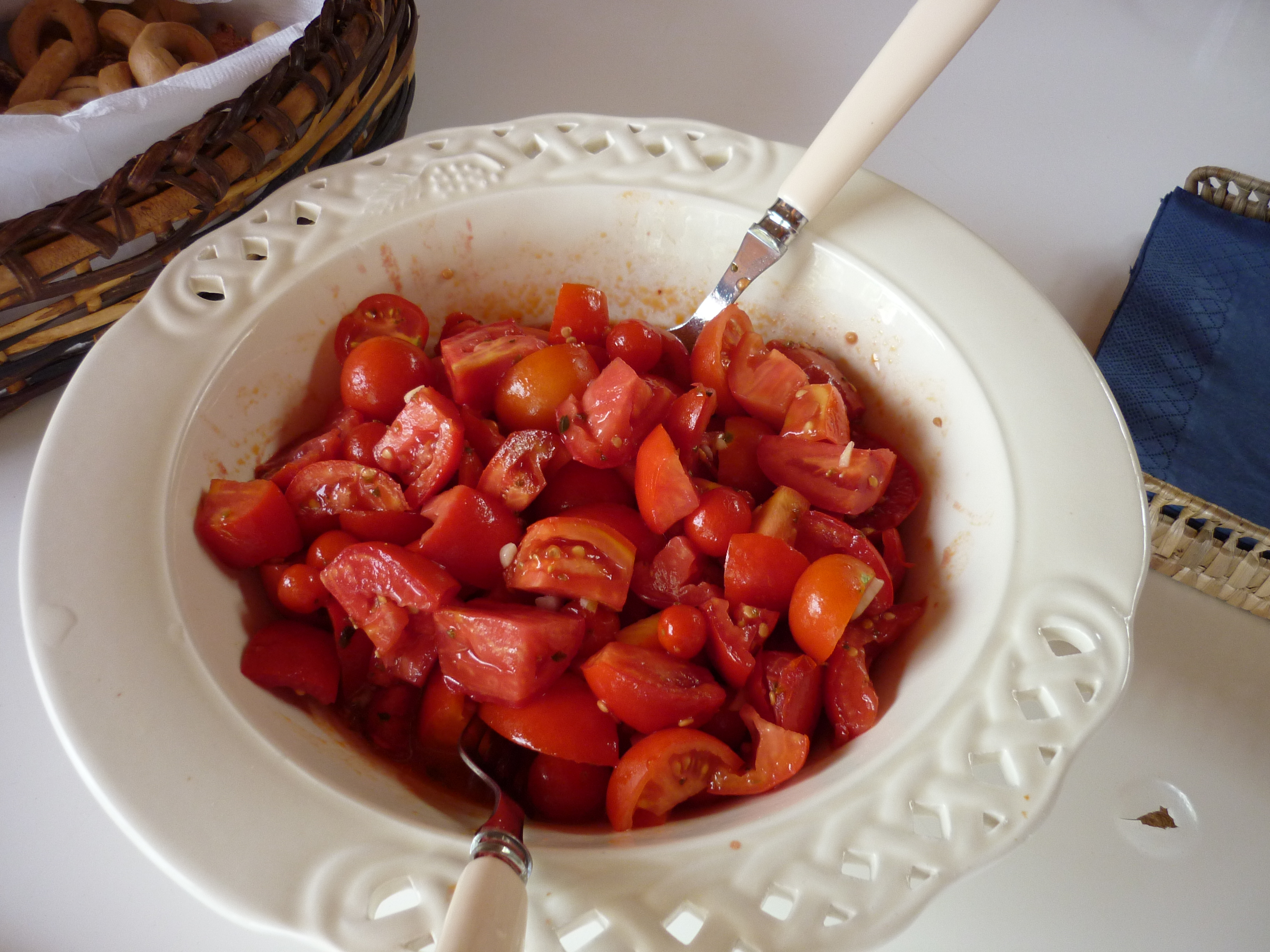 Whether roughly chopped as part of a Greek salad (horiatiki salata— village salad in Greek), an Italian bread and tomato panzanella (sweet, summer tomatoes dressed in olive oil, vinegar, and basil, tossed with garlicky toasted bread cubes to soak up the delicious tomato juices) or a classic Caprese (tomatoes, fresh mozzarella or burrata, basil, fruity extra virgin olive oil and balsamic vinegar); used as the foundation for a simple salsa fresca; or pureed for a cooling summer gazpacho, a good tomato can be savored in a seemingly limitless number of preparations.

One of the simplest, yet tastiest, ways to celebrate the summer tomato is pan con tomate, also known as pa amb tomàquet. This traditional Spanish tapa is nothing more than grilled bread topped with grated tomato and drizzled with a healthy dose of fruity extra virgin olive oil and a sprinkling of coarse sea salt, sometimes topped with anchovies or jamon. Don’t let its simplicity deceive you, because pan con tomate is nothing short of glorious when tomatoes are at their peak.

Paximadia is a Greek meze or starter consisting of an oven-dried bread (barley rusks) topped with bright, vine-ripened tomatoes, plenty of cheese—feta or Mizithra—Greek oregano, and, often, a sprinkling of capers. One of the most loved summer Greek meze are domatokeftedes or tomato fritters, which originate from the island of Santorini. A thick batter of tomatoes, mint and ﬂour is dropped into hot olive oil and fried until crisp.

Most of us are familiar with the chilled Spanish tomato soup known as gazpacho, but have you heard of gazpacho’s creamier cousin salmorejo? Salmorejo is a popular Andalusian soup made primarily with tomatoes and bread, and ﬂavored with a splash of sherry vinegar. Its creamy mouthfeel may have you convinced that there’s cream in it; rather, bread and emulsiﬁed olive oil are responsible for its luscious texture. Salmorejo is typically garnished with chopped hard-boiled eggs and ham.

Acili ezme is a Turkish vegetable salad, speciﬁcally, a mixture of ﬁnely diced tomatoes, cucumbers, peppers, chiles, scallions, fresh herbs, and spices that is often served with crisp pita chips. Ezme translates to squash/mash/crush in Turkish. It’s reminiscent of a Mexican salsa, albeit with a few additions, namely sumac and pomegranate molasses, both of which impart a pleasant fruity-tart ﬂavor. 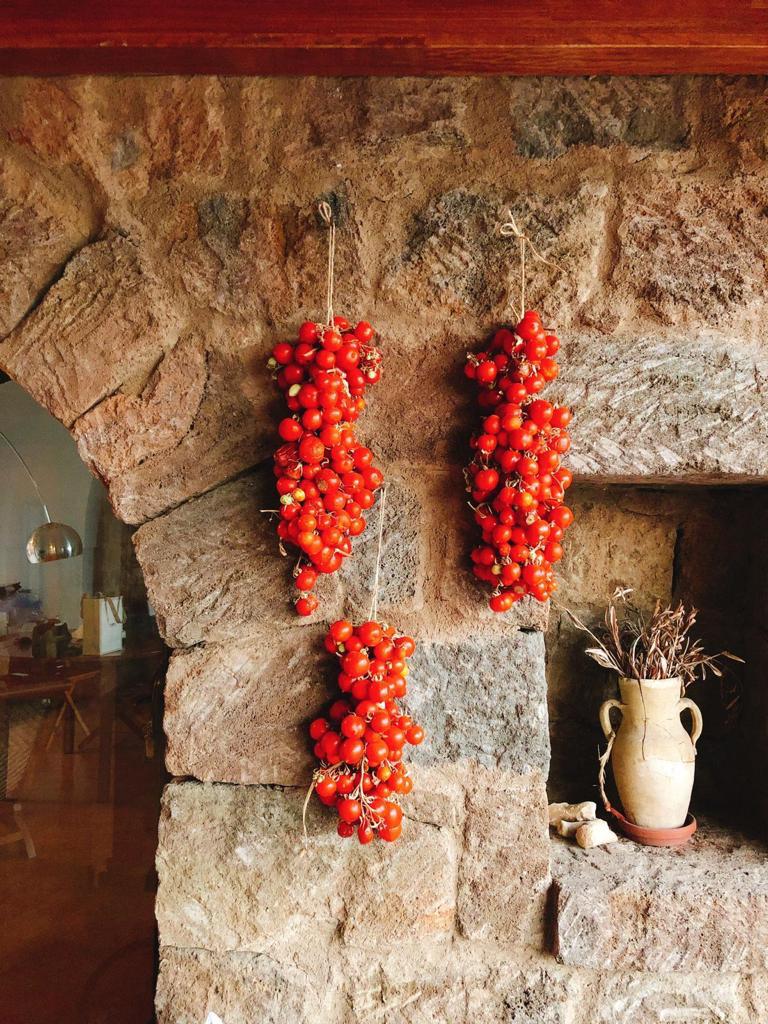 Tomatoes hanging on the Mediterranean island of Pantelleria

What else can you do with tomatoes?

Ripe tomatoes are delicious when stuﬀed with a hearty mixture of ground meat, rice, onions, garlic, fragrant spices and healthy drizzle of extra virgin olive oil and then baked in the oven until tender perfection. Be it a caramelized French tarte tartin or tomato galette, puﬀ pastry-based or homemade ﬂaky, buttery pie crust – you can’t go wrong with a tomato tart or pie.

In late summer, when tomatoes are at their ripest, make a big batch of fresh tomato sauce. Don’t overlook slightly imperfect, bruised tomatoes, which are often labeled as “seconds” (and sold at a discount). They make for an inexpensive and decidedly fresh, bright-tasting sauce that can be tossed with pasta and eaten right away or stored in the freezer to be enjoyed all year long. Tomatoes contain lycopene, an antioxidant that protects against heart disease, and when tomatoes are cooked in olive oil, the lycopene becomes more available to your body.

A long, slow roast in the oven gives juicy tomatoes good caramelization and concentrates their ﬂavor—lending sweetness to their robust, savory, and umami notes. Gently smash some oven-roasted tomatoes atop grilled bread rubbed with a clove of garlic, top with, perhaps, some creamy, sharp feta and fresh herbs and a drizzle of extra virgin olive oil for that perfect bite of summer.

The Dietary Guidelines recommend that most adults eat 4-6 cups of red or orange vegetables (including tomatoes) per week, which means that one can never have too many tomato recipes. Take advantage of nature’s most delicious season, and try a Mediterranean-inspired tomato recipe today!