Kwik’pak and Oldways: “For the Health of It” Re-cap

I’m going to go out on a limb here and say that this was our best wild salmon event yet. New York was fun, Houston was sunny, but Boston is our home, so you know that we had to do something big when it came time to plan, with our friends at Kwik’pak, our “For the Health of It” event at the Harvard Faculty Club in Cambridge. I think Dr. Dariush Mozaﬀarian from the Harvard School of Public Health said it best: “Seafood is the single most important food one can consume for good health.” This is especially true with seafood like Wild Alaskan Yukon River Salmon, which beats out every other kind of ﬁsh in the USDA database when it comes to high levels of Omega-3 fatty acids. Kwik’pak and Oldways wanted to plan an event that would show oﬀ the wonderful beneﬁts of this salmon in a variety of ways, including cooking demos, a Q&A session from the Yupik Eskimos who harvest the salmon, and what else?  Lots of eating! If you haven’t seen the inside of the Harvard Faculty Club, then you’re missing out on a chance to experience the real-life version of Hogwarts. Chandeliers, regal-looking chairs, paintings of celebrated scholars and people who are generally a lot smarter than you. It was a truly fun and beautiful venue. 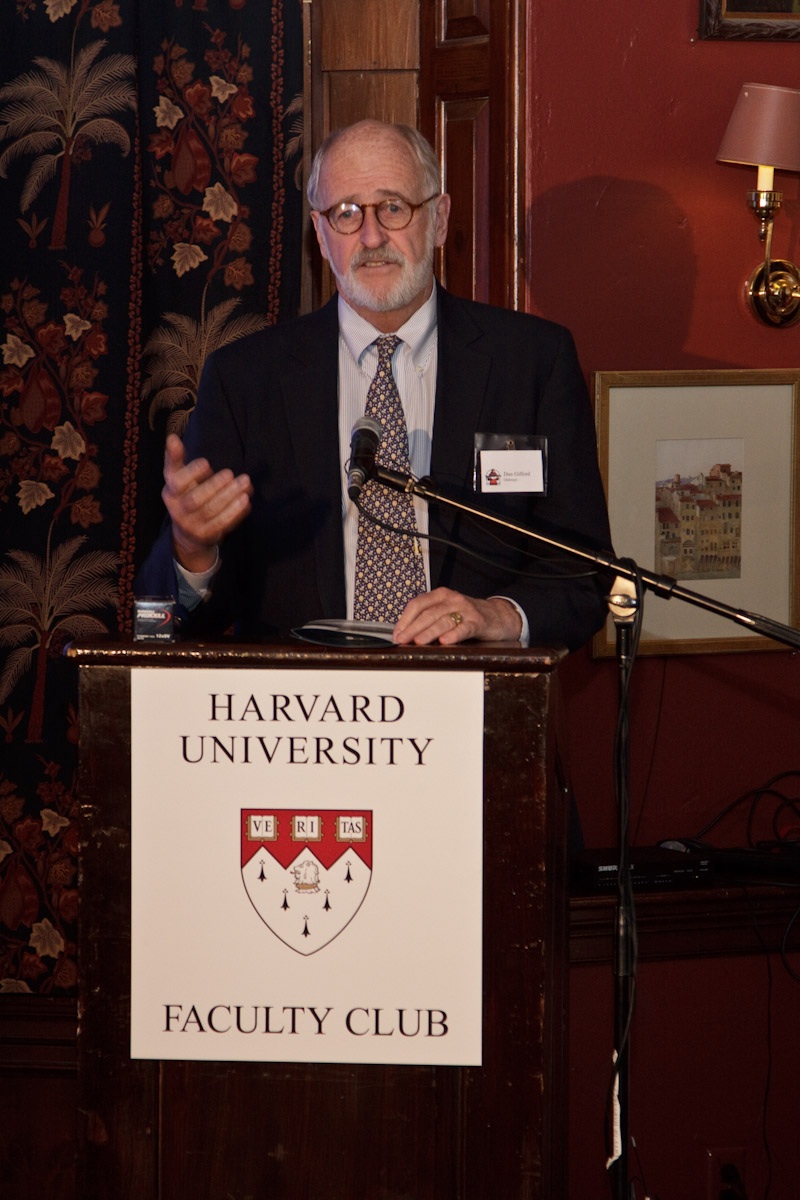 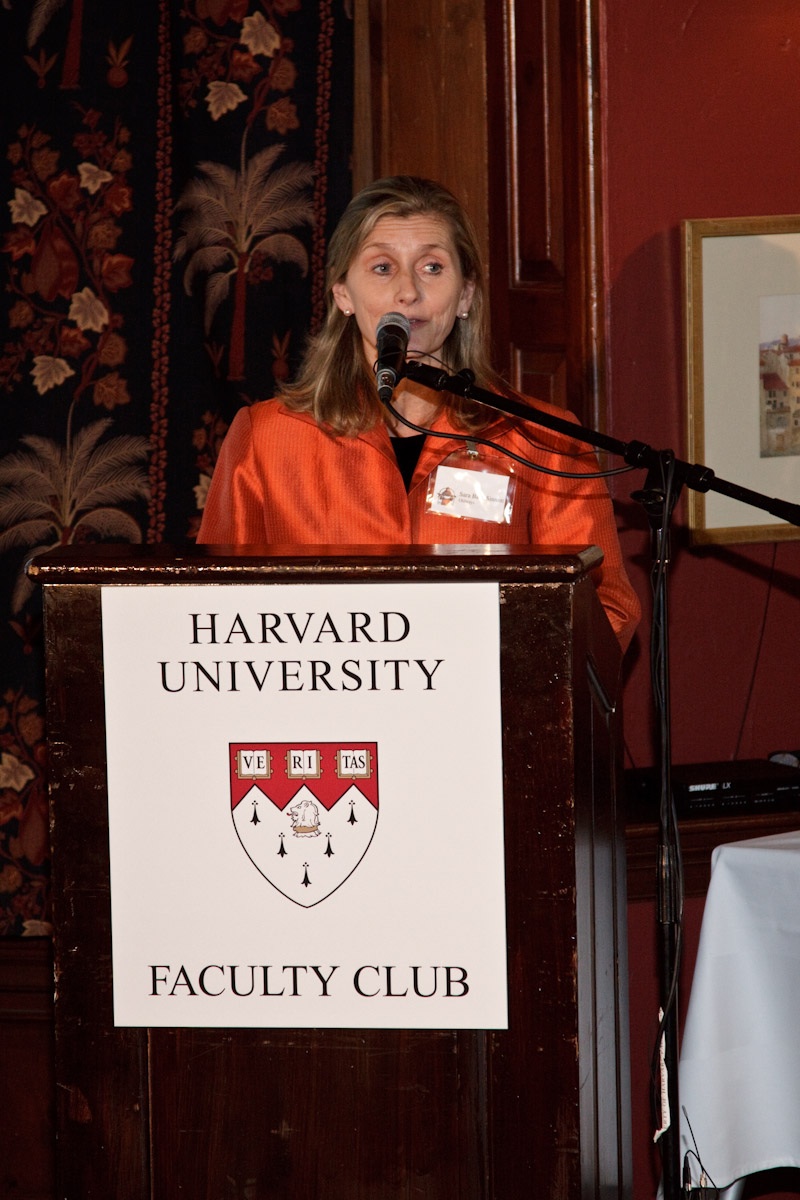 We started things oﬀ with the Oldways bosses (did I mention they are both humanitarians and FABULOUS dressers to boot?) speaking about our collaboration with Kwik’pak, and how salmon is a perfect ﬁt for the Oldways Traditional American Table. They also introduced the good doctor Dary Mozaﬀarian, who went on to give his presentation titled What Consumers Need to Know About Seafood, Omega-3s and Human Health. 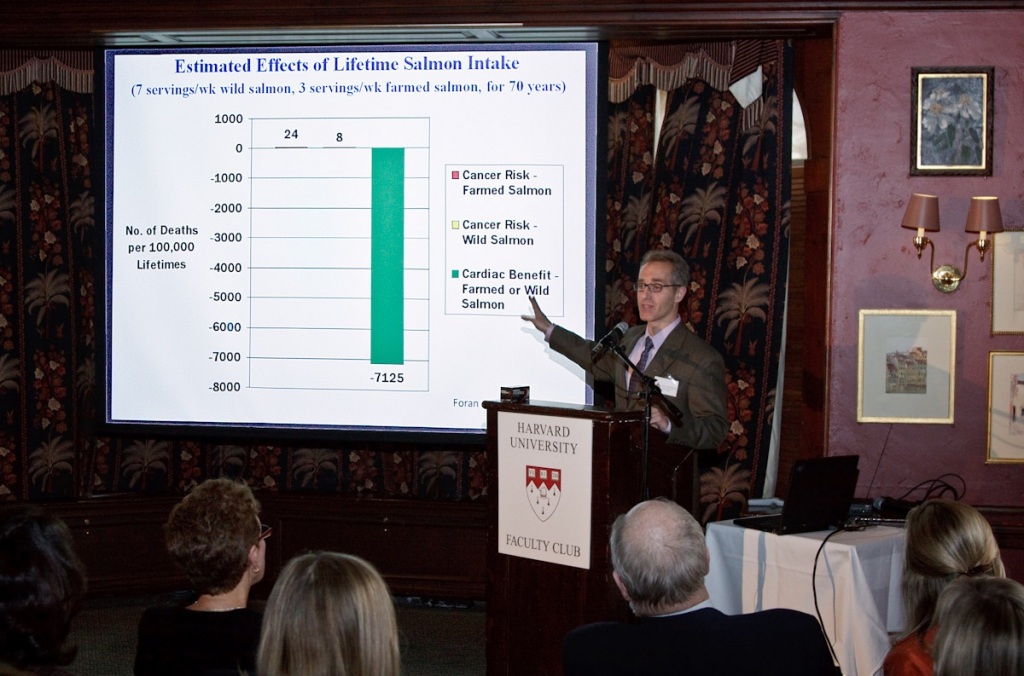 Some things I took away from his talk Dr. Mozaﬀarian knocked his presentation out of the park. For hours afterwards, all anyone could talk about was how informative and well-presented his talk was. I’m also inclined to call him the rock star of the event, though I haven’t decided whether he’s a Mick Jagger or more of a Paul McCartney. Must research. The next person to stand behind the podium was Jack Schultheis, General Manager of Kwik’pak Fisheries. 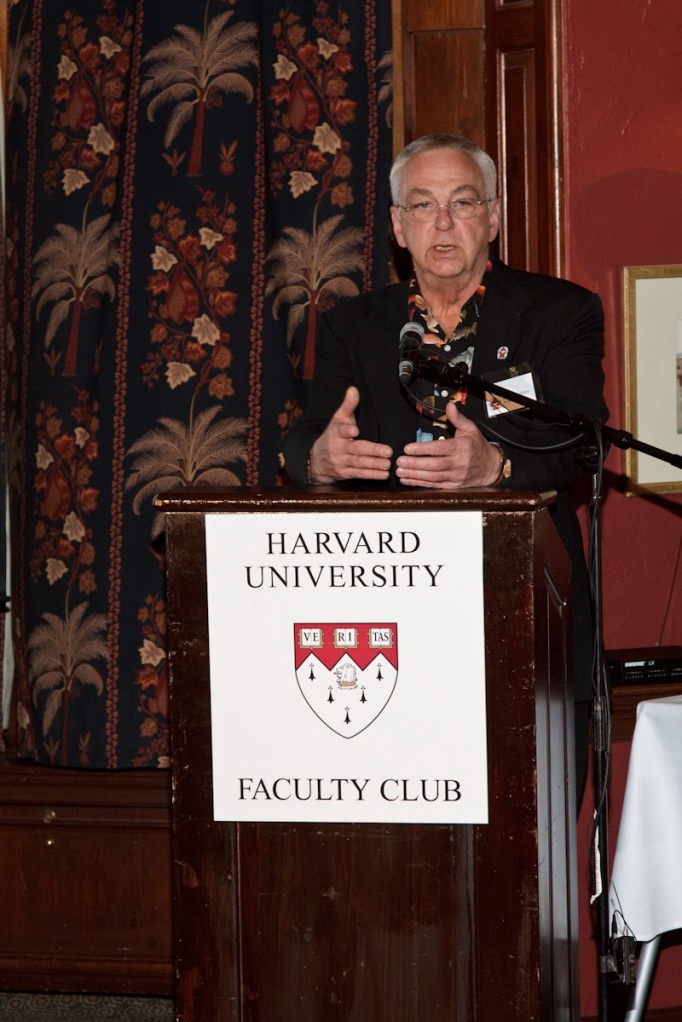 Jack gave a really moving speech about the importance of Yukon River Salmon to the Yupik people, and how he is focused on helping develop the economy in the Lower Yukon. “Our job is to ensure that our ﬁshermen get the highest economic return for these valuable ﬁsh,” he said. Since arriving in Alaska in the early 1970s, Jack has been a ﬁxture in the Alaskan ﬁshing industry and it became very clear to everyone in the audience how passionate he really is about his job and about the people he works with. Then it was time to get cookin’! 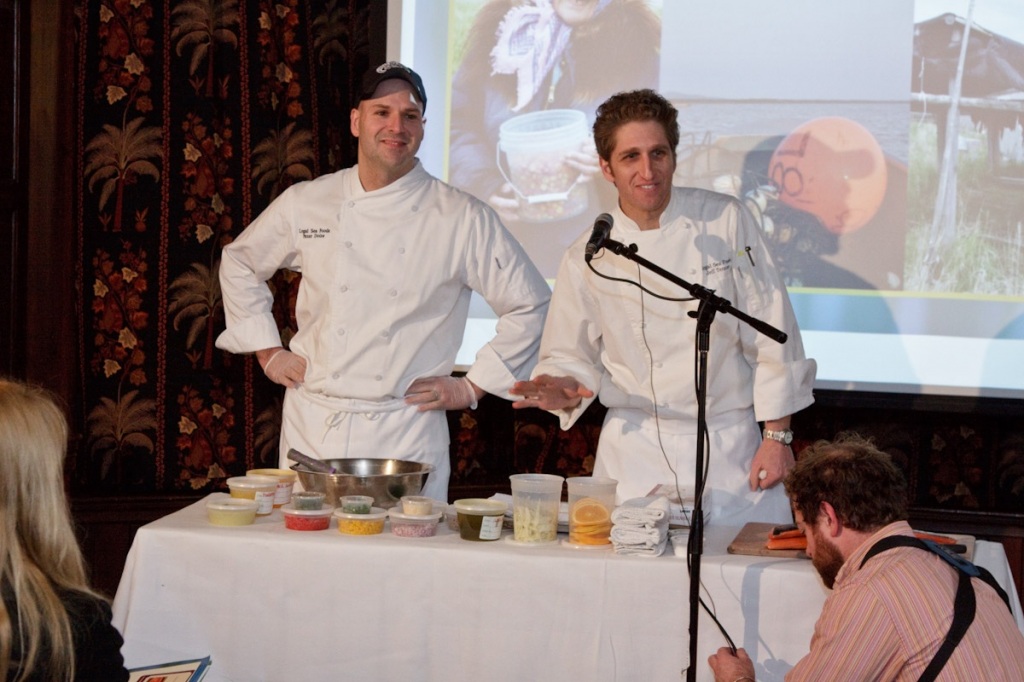 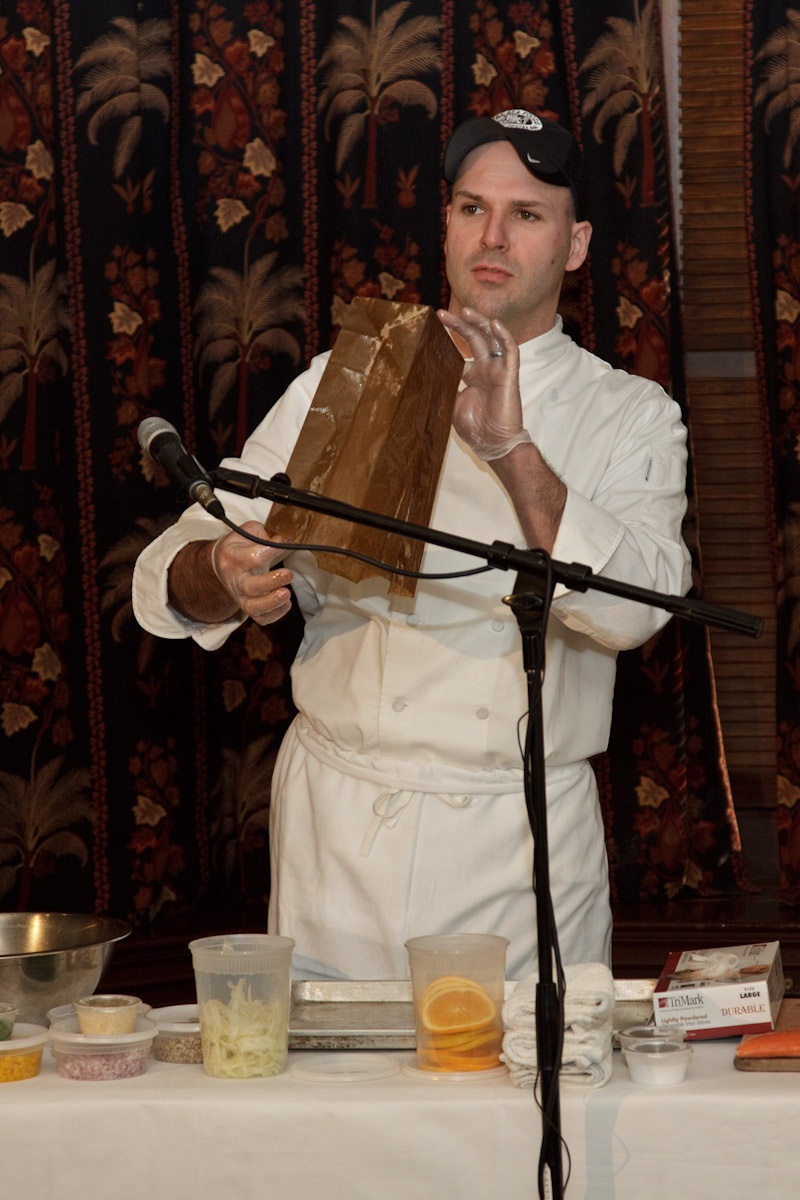 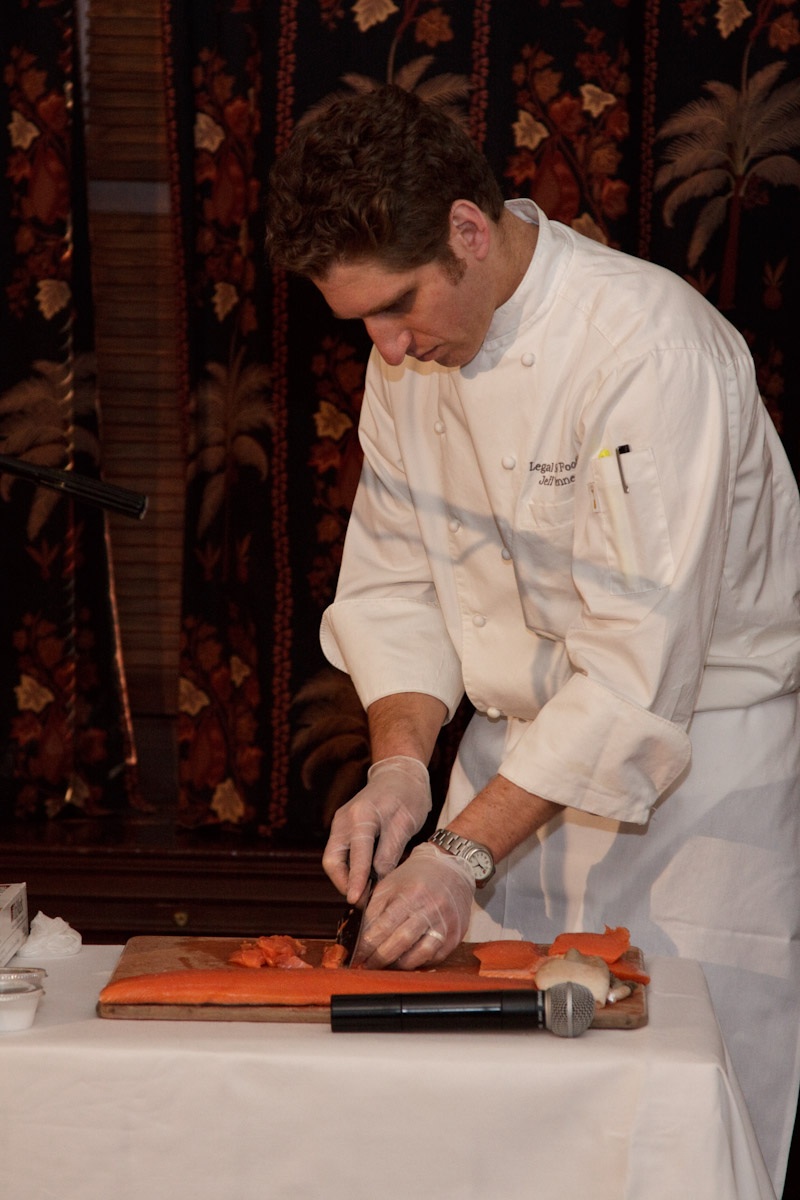 Amazing, right? The guys were very funny and the meals looked wonderful. So wonderful in fact, that after they were done cooking, we all had to have an “Eat Salmon and Mingle” break. 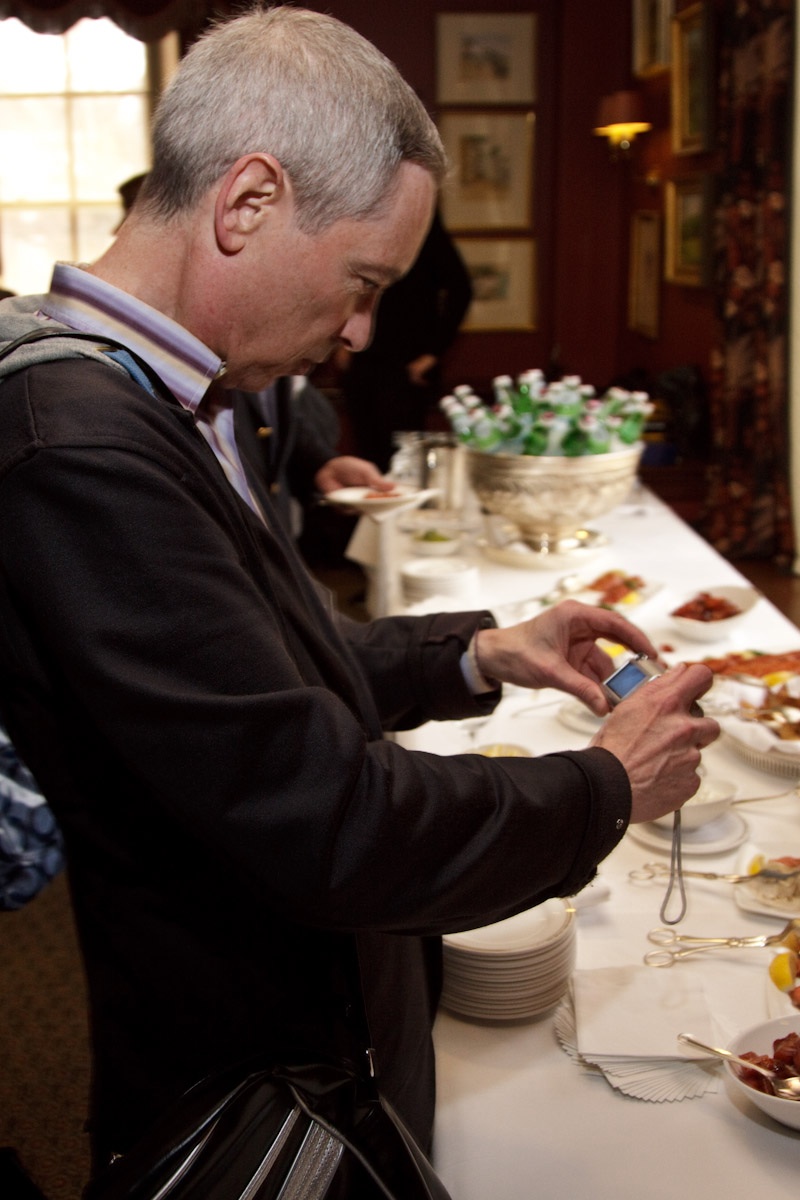 Bill from The Boston Foodie being a good food blogger and taking some sweet pics! 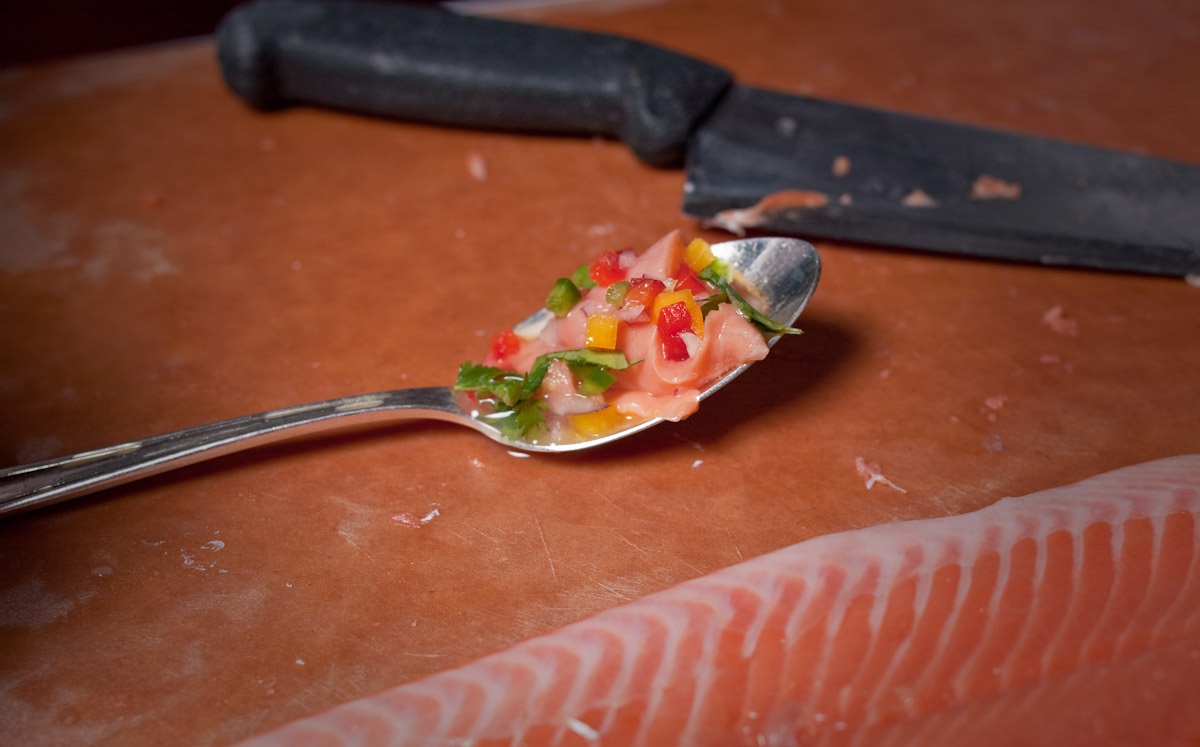 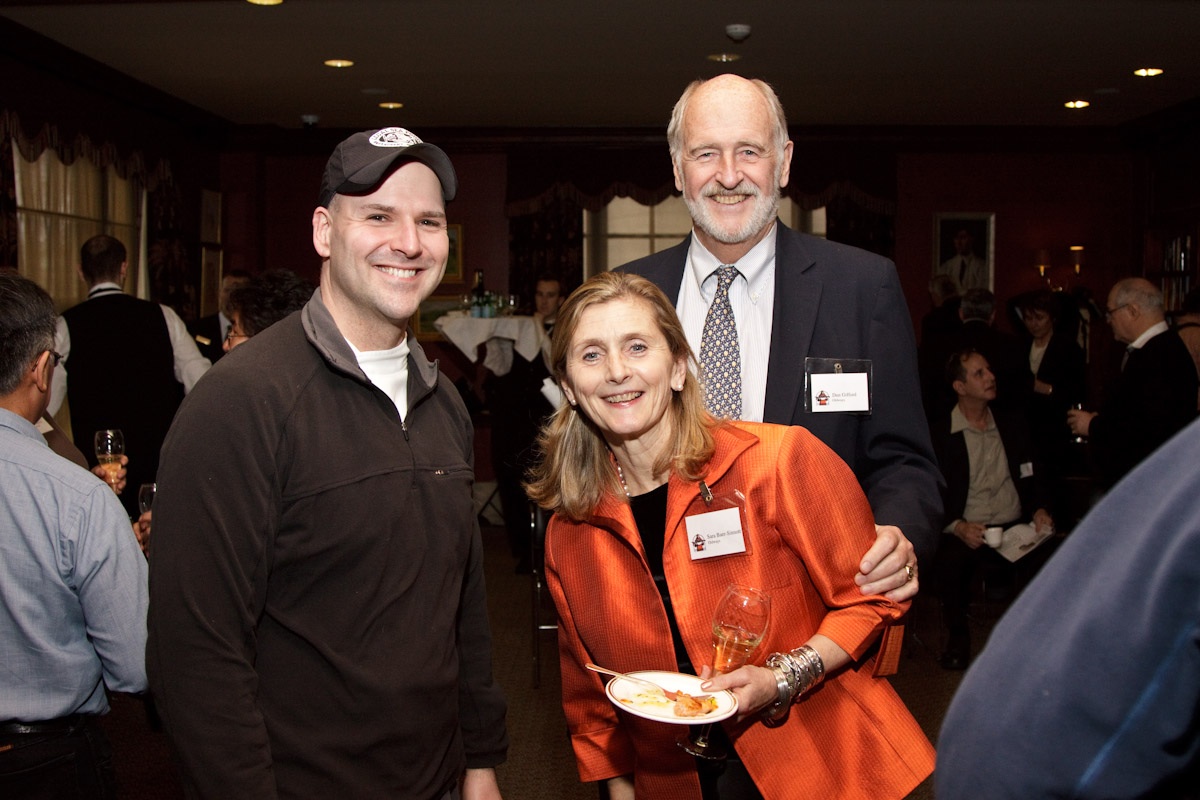 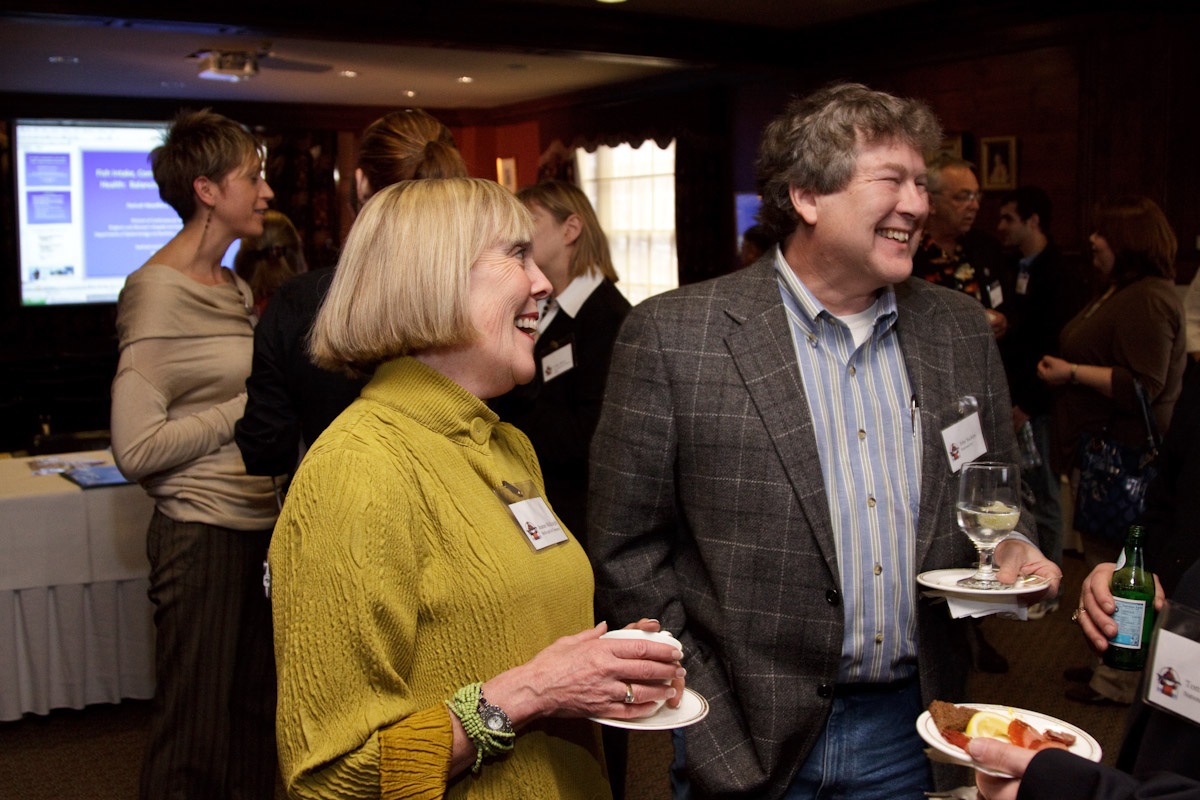 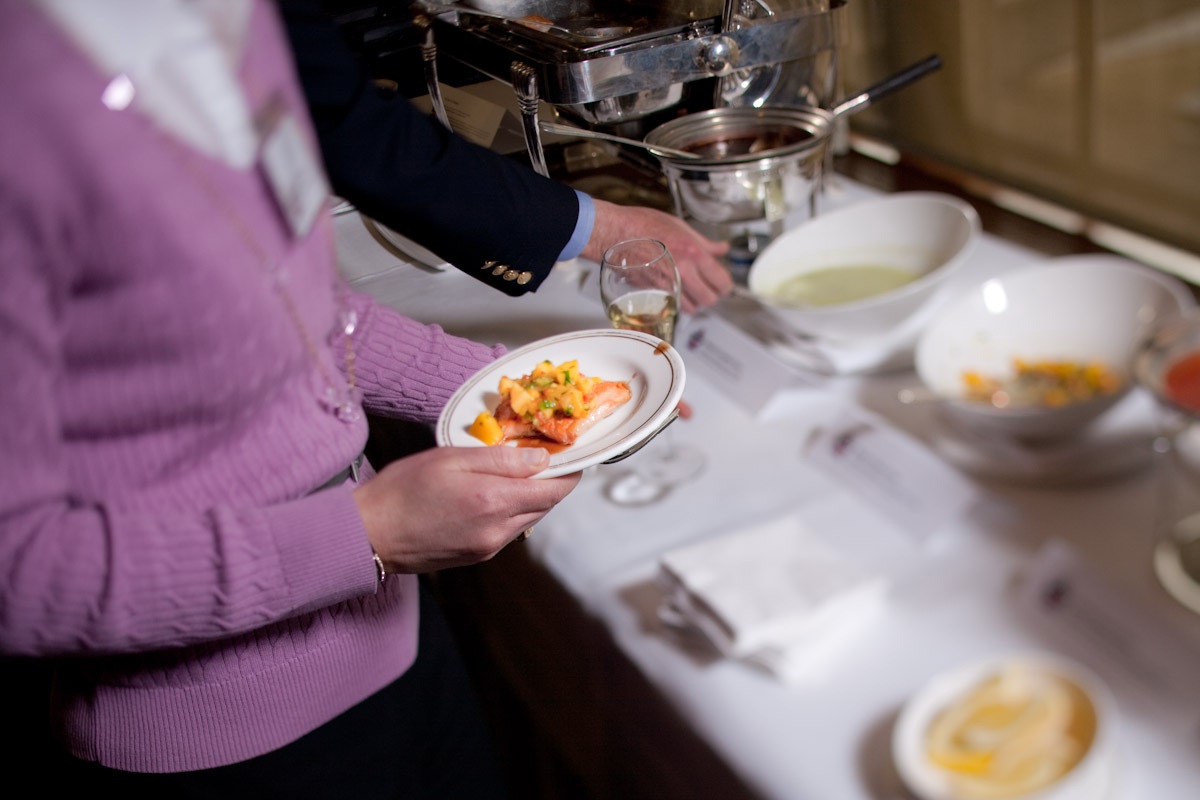 We served Yukon River Salmon with 4 Dipping Sauces, along with some Spanish Cava to drink. The Mango Salsa Sauce was the clear favorite of the evening. 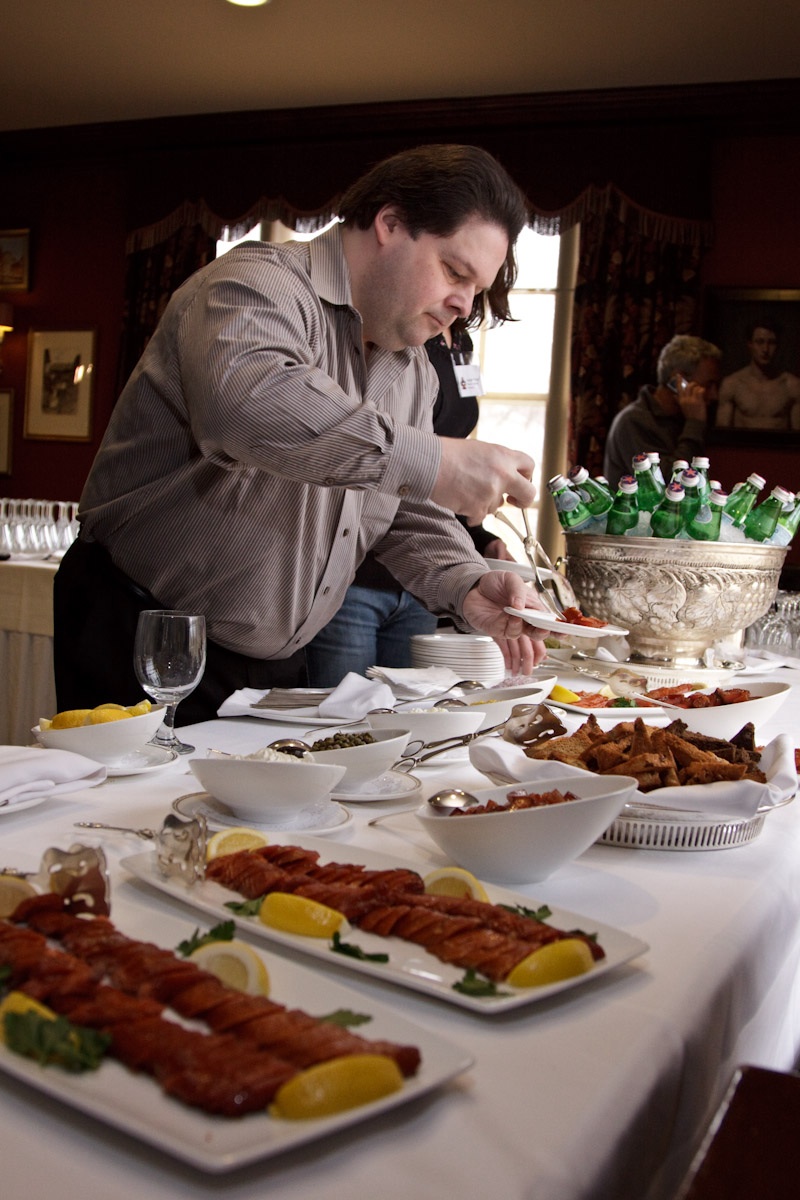 Richard from The Passionate Foodie surveying the scene 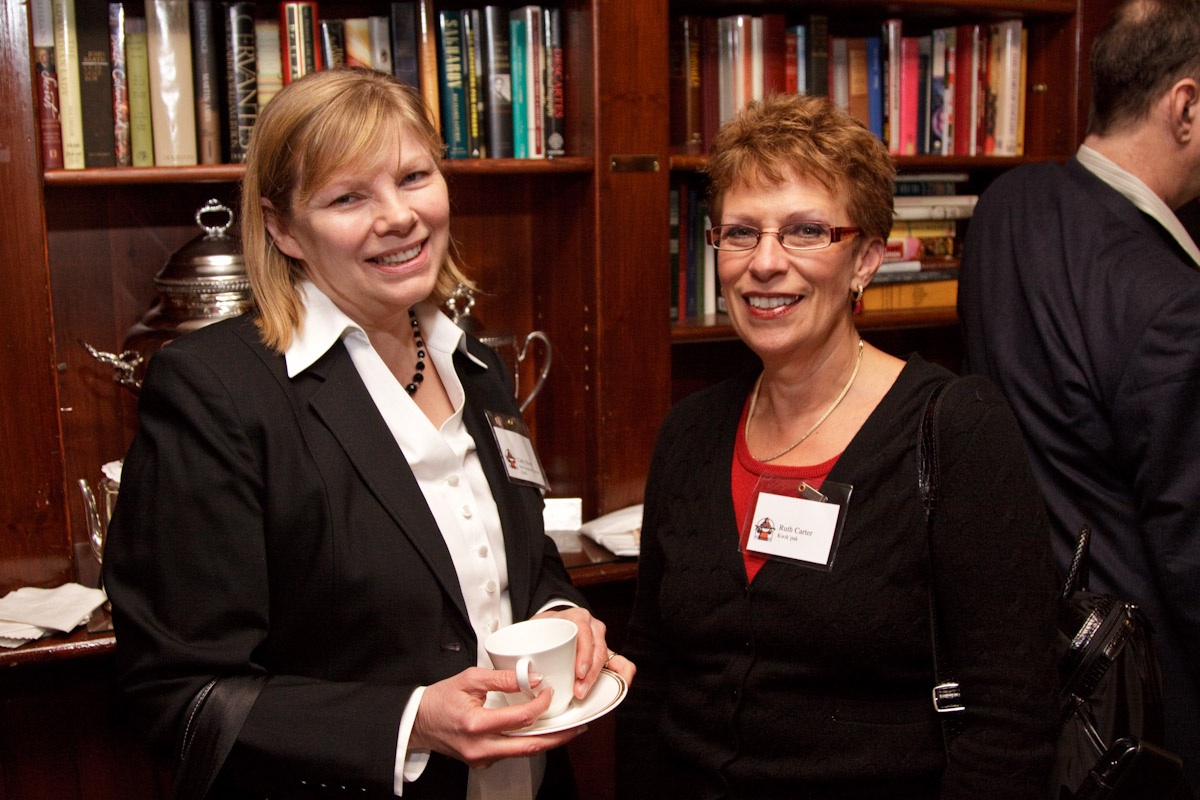 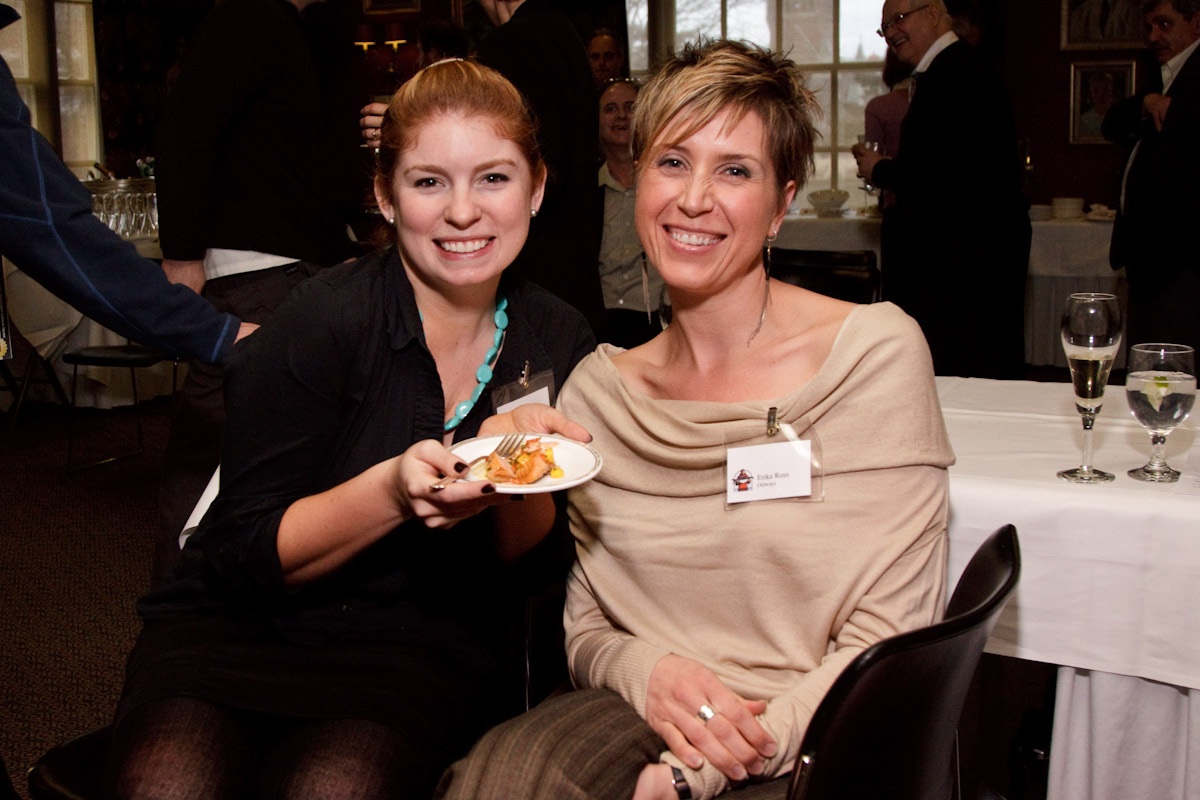 And there’s me on the left with my always camera-ready co-worker Erika on the right! After all that eating and chatting, it was time to take our seats again to hear Matilda Oktoyuk and Ellen and Humphrey Keyes, Yupik Eskimo ﬁshermen speak about their daily lives in Emmonak, Alaska. They really emphasized how important the salmon is to their survival in today’s modern world. Audience members quizzed them about what their lives are like in the oﬀ-season, how much vegetables cost in the Lower Yukon, and the South Beach Diet even came up at one point. What can I say? You never know what to expect at an Oldways event! 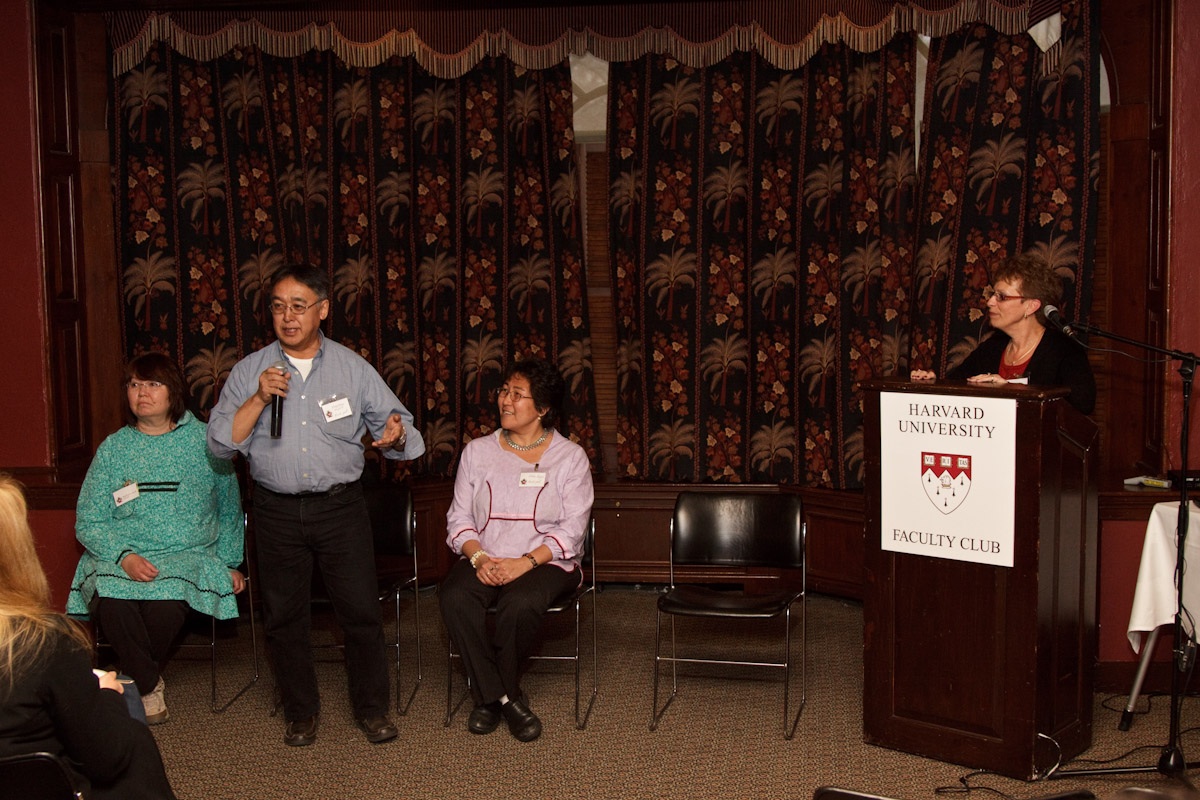 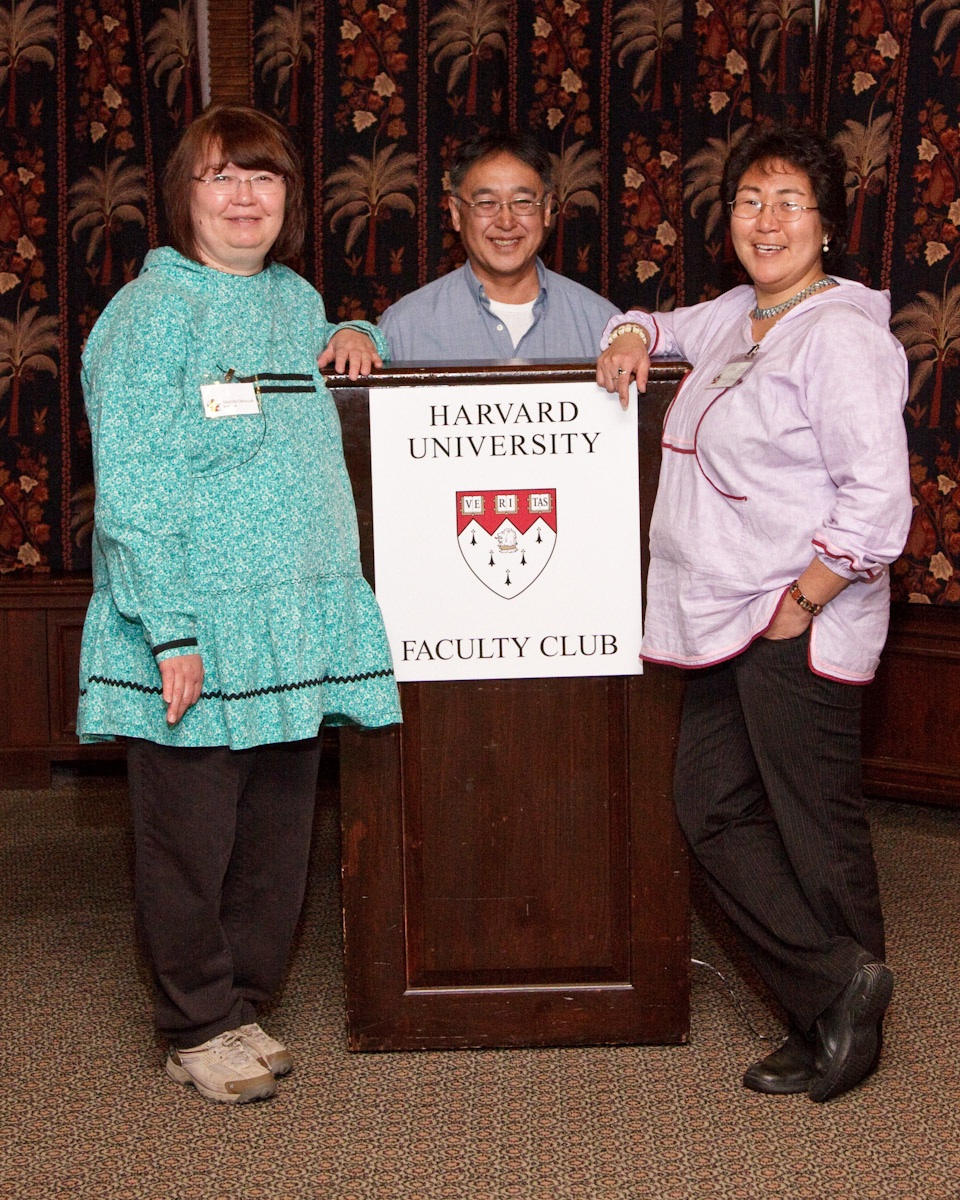 And then all of sudden, the event was over (much too quickly) and it was time to say goodbye to all of our new friends. I would like to thank everyone who attended Friday’s event, you don’t know how much fun we had with all of you. We would also like to thank all of our speakers and especially the great people at Kwik’pak. For even more information on “For the Health of It”, check out these great re-cap posts from attendees Tina from Carrots N Cake and Meghan from Travel Eat Love.  — Alison