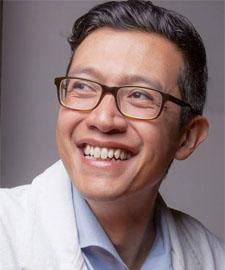 Carlos Yescas consults with Oldways and the Oldways Cheese Coalition as a Traditional Cheese Advocate.

Carlos’ career in cheese began at Sheridans Cheesemongers, where he worked the counter and sold from a stand at the weekend Galway Farmers Market in Ireland. Since 2009, he has served as one of 16 supreme judges at the World Cheese Awards; in 2011, he was inducted as a member of the Guilde Internationale des Fromagers and in 2016 as a member of the Confrérie du Gruyère.

As a food scholar, Yescas taught a graduate-level class on food regulation and law in New York University’s Food Studies department. In addition, he has conducted extensive doctoral research on the principles and regulations of cheese. He holds a Master of Law from the National University of Ireland, a Master of Philosophy in politics from the New School for Social Research in New York, and a Bachelor’s degree in business from Endicott College in Massachusetts.

As an entrepreneur, Carlos co-founded Lactography, the ﬁrst artisan cheese distribution company in Mexico, and, in 2014, opened QuesoStore in Mexico City. He combined his love for Mexican cheese and research to publish the book Quesos Mexicanos in 2013 by Larousse, and was awarded second place for best cheese book at the Gourmand Cookbook Awards 2014. He previously worked in diplomacy and international relations in posts at the Consulate of Mexico in Boston, the United Nations Development Programme, and at the International Organization for Migration in New York. In 2015, Carlos was named as one of the “50 hottest places, people and trends in food” by the Guardian UK Observer Food Monthly magazine, and his work is the subject of an episode of A Taste of Mexico (10th season) that airs on PBS and is hosted by chef Rick Bayless.

Carlos is a frequent speaker on food and topics of social justice and migrant rights in a variety of venues, including The Basque Culinary Center, the International Association of Culinary Professionals, Mesamerica, Roots Conference, as well as the New York Public Library. He has traveled the western world documenting cheese traditions and stories and is currently researching raw-milk use in cheesemaking around the world.