This week Congress unveiled a 2000+ page omnibus budget bill that in several ways puts politics over science and health, affecting all of us who care deeply about food. As often happens, a must-pass bill to keep government running was plastered with scores of riders promoted by special interests. We especially want to make Oldways readers aware of five key riders that affect the Dietary Guidelines, school meals, consumer-friendly food labels, trans-fats, and calorie-labeling on menus.

This week Congress unveiled a 2000+ page omnibus budget bill that in some areas puts politics over science and health, aﬀecting all of us who care deeply about food. As often happens, a must-pass bill to keep government running was plastered with scores of riders promoted by special interests. We especially want to make Oldways readers aware of ﬁve key riders: 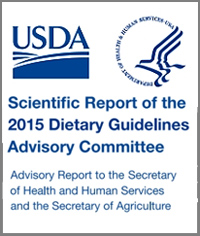 1. Undermining the Dietary Guidelines. The 2015 Dietary Guidelines became a political football last February, when the scientiﬁc report on which they are supposed to be based included recommendations to eat a more plant-based diet, both for our own health and that of the planet.
The meat industry came out swinging, with a strong campaign to undermine the credibility of the yet-to-be-released 2015 Dietary Guidelines and the process on which they are based. Sec. 734 of the Omnibus Bill says that no government funding may be used to used to release or implement the 2015 Dietary Guidelines unless Tom Vilsack (USDA) and Sylvia Burwell (HHS) ensure they are “based on signiﬁcant scientiﬁc agreement” and “limited in scope to nutritional and dietary information.” Plus, the bill allocates $1,000,000 for the National Academy of Medicine to review the entire Dietary Guidelines process.
Our Take: The science in favor of primarily plant-based diets is strong. The Common Ground Consensus Statement, created by some of the world’s top nutrition experts, supports both plant-centric eating patterns and the Dietary Guidelines process. While every process can beneﬁt from improvements, we have trouble imagining that a distinguished panel from the National Academy of Medicine will come up with markedly diﬀerent results than the distinguished panel of experts that just spent two years volunteering their services to create the DGAC report. 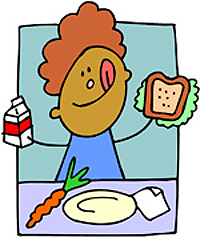 2. Stalling on School Lunch Progress. Public health and child nutrition are somewhat stalled, as the proposed budget bill upholds the waiver to the Healthy Hunger Free Kids Act, where school districts struggling to meet the whole grain rich requirement could dial back to only 50% whole grain rich foods. At ﬁrst glance, making half of foods whole grain rich might sound reasonable. However, it’s important to note that “whole grain rich” means that only half of the grain ingredients need to be whole. So 50% whole grain rich, the alternate proposed in the current budget bill, means that only a scant 25% of grains need to be whole grain in order to be in compliance. Similarly, future restrictions on sodium have been put on hold. On the upside, however, the budget bill does provide an additional $30 million dollars in grants for new kitchen equipment.
Our Take: While a vocal minority have dragged their feet on improving school lunches, the vast majority of school districts have made great strides in bringing healthier foods to kids. October 2015 data from the USDA show that 97.1% of schools across the US are certiﬁed as meeting the updated nutrition standards. Similarly, Margo Wootan, of the Center for Science in the Public Interest, reports that less than 10% of schools are asking for waivers for the whole grain requirements. With so few school districts left struggling, it is a shame that Congress continues to drag their feet on this important public health issue. We hope that the next budget bill will honor the Healthy Hunger Free Kids Act to it’s full potential. 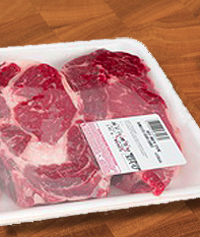 3. Country of Origin Labeling isn’t so COOL.  Country of Original Labeling (COOL) regulations originated in 2002 and were strengthened in 2013 to give consumers more information on where animals were born, raised, and slaughtered. Surveys show that 90% of consumers want fresh meat labeled with where it comes from. Nonetheless, Congress and the World Trade Organization (WTO) have been tussling back and forth, with a WTO panel saying COOL violates global trade rules that require imports to be treated no less favorably than domestic products. Under the threat of $1.1 billion in potential WTO-approved sanctions from Canada and Mexico, Congress added language repealing COOL to the Omnibus bill.
Our Take: Meat is big business, and it is discouraging to see guidelines and regulations that aﬀect consumer health dictated by business, rather than by common sense, the will of the people, and scientiﬁc facts.  We all beneﬁt, the more we know about where our food comes from. In fact, some sources report that this full repeal goes farther than needed, rolling back COOL labeling on ground beef and ground pork even though those provisions were trade-compliant. (It’s strange that the Omnibus bill repeals COOL labeling in one section – then stipulates in another that Chinese chicken can’t be served in schools.) 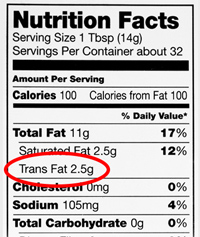 4. Trans-fats: still safe until 2018? Really? Over the last two decades, experts and policymakers have reached widespread agreement that partially hydrogenated oils (known as trans-fats) are unhealthy, contributing to heart disease, strokes and diabetes. In 2002, an IOM report said it could not declare any level of trans-fats as safe. In 2003, FDA ruled that trans-fats must be included on food labels as of 2006, and in mid-2013, FDA declared them to no longer be “generally recognized as safe” (GRAS). Although the food industry has already had thirteen years to work on replacements since the IOM report, trans-fats won’t be banned until June of 2018. Sec. 754 of the Omnibus bill says (roughly) even though FDA says they’re not safe, no food containing trans-fats can be legally found unsafe until the ban goes into eﬀect.
Our Take: Responsible food companies have already removed the trans-fats from their foods. Even if this bill declares trans-fats to be safe from lawsuits until June 2018, that doesn’t make them safe to eat. Do your body a favor and check labels, rejecting any food that includes partially-hydrogenated oil in its ingredients. (Stick with whole foods and cook at home more often, and you’ll have a lot less label-reading to do!) 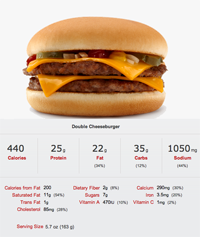 5. Calorie Labels on Menus Get Pushed Back. The requirement to label menus has been pushed back another year, to December 2016. This delay is no doubt due to the vocal complaints of the food industry, and pizza-makers in particular. Even though New York City had this ﬁgured out nearly a decade ago (requiring calorie counts on menus since 2008), many in the food industry, especially those peddling supersized foods, say they need more time to comply, citing the complexity of made-to-order menus (like pizzas).
Our Take:  Many industry leaders have already done the heavy lifting, providing practical examples for how menu labeling can work. For example, Naked Pizza provides all crust and topping information in a simple chart, allowing consumers to do the math if they so choose. Popular sandwich chains like Subway and Which Wich have adopted a similar approach.
At Oldways, we believe that food is more than just numbers. After all, fruits and veggies straight from the earth don’t have any labels touting their nutrients and calories. That said, the same is not true of many of the unlabeled restaurant and convenience meals today. In an environment plagued with portion distortion and chronic disease, Americans would certainly beneﬁt from having easier access to nutrition information.
How do you feel about these provisions in the Omnibus Spending Bill? Add your comments below.
— Sara Baer-Sinnott, Cynthia Harriman, and Kelly Toups