We are over the moon about a new study published this week in The New England Journal of Medicine that shows the Mediterranean Diet may reduce the risk of heart disease and stroke!
Mediterranean Dietolive oilStudy 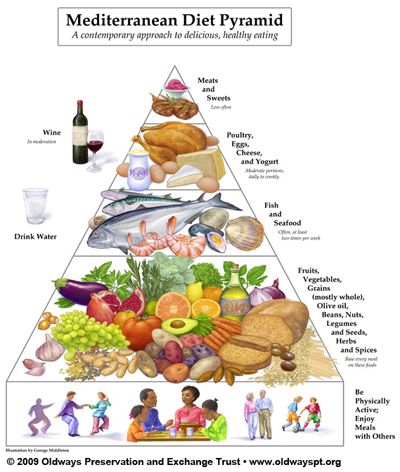 Here at Oldways we are over the moon about the study published on Monday on The New England Journal of Medicine’s website that shows the Mediterranean Diet may reduce the risk cardiovascular disease and stroke by as much as 30%. The study is the latest in a mounting body of research that shows the astounding health beneﬁts associated with the traditional Mediterranean Diet, a plant-based diet whose staples include fresh vegetables and fruit, beans and other legumes, nuts, olive oil, and seafood.

As reported above the fold on the front page of the New York Times, “The ﬁndings…were based on the ﬁrst major clinical trial to measure the diet’s eﬀect on heart risks. The magnitude of the diet’s beneﬁts startled experts. The study ended early, after almost ﬁve years, because the results were so clear it was considered unethical to continue.” (In other words, the people not in the Mediterranean Diet groups were so clearly losing out that the study was stopped – kind of like the mercy rule in baseball.) The news is so big that all of the major news outlets, including ABC, CBS, CNN, Fox, NBC, NPR, and Reuters, reported on the story.

The coolest thing about this study is contained in the two words “clinical trial.” While there is a great deal of epidemiological evidence showing correlations between the Mediterranean Diet and good health, clinical trials – which show causation, not just correlation – are devilishly diﬃcult to carry out. It’s expensive to follow large groups of people for long periods, and diﬃcult to get them to rigorously follow a speciﬁc diet.

This was an enormous study: 7,447 people in Spain were followed for about ﬁve years. The people (aged 55 to 80) were randomly assigned to one of three groups: Med Diet with at least 4 tablespoons of olive oil daily; Med Diet with an ounce of nuts daily; and a control group eating a low-fat diet. The two Med groups had no trouble following their instructions to enjoy ﬁve servings of fruits and vegetables, ﬁsh and legumes each three or more times a week, white meat instead of red, and wine (for those who drink), while avoiding commercial cookies and cakes, dairy products and processed meats. The low-fat group morphed into a “typical Western diet” group, because following a low-fat diet lacked the satiety and pleasure of the Med Diet. At the ﬁve-year mark, the two Med groups had 30% fewer heart attacks and strokes than the “typical Western diet” group.

For the last twenty years we at Oldways and the Mediterranean Foods Alliance have been proponents of the Mediterranean Diet, not only because of its health beneﬁts (which are MANY), but also for its diverse and delicious ﬂavors. While this is the ﬁrst clinical trial of this magnitude to so clearly document the heart health beneﬁts of going Med, several other studies have found that the Mediterranean Diet is one of the easiest to stay on, which serves to remind us how punishing most fad diets are, and what a delight it is to have a lifelong aﬀair with the Med Diet.

Check out the many wonderful Mediterranean recipes on the Oldways website, and Go Med today. You’ll be in good company: at one point right after the study was released, our website crashed from the increased volume (about seven times normal traﬃc) of people seeking out our many Mediterranean Diet resources and recipes. Now we’ve upped our bandwidth and RAM – because the Med Diet only becomes more popular every day. Enjoy!