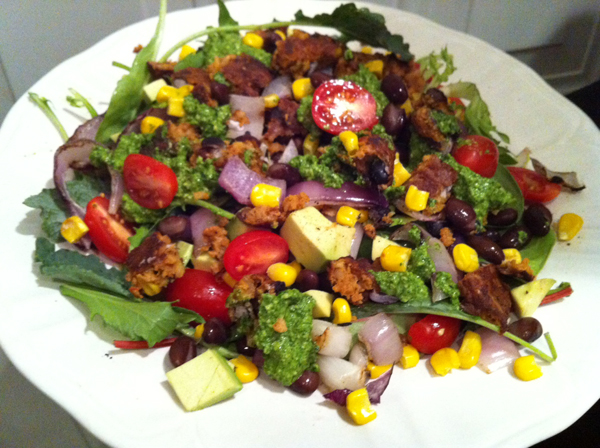 Food is on my mind all too often… throughout my waking hours and even sneaking into my sleep.  In fact, just the other night I dreamt I was a competitor on a cooking show.  In the ﬁrst challenge, I was armed with a paring knife to compete against several other contestants to see who had the best knife skills when cutting up green tomatoes. Now I realize this was not Top Chef challenge material but it did make me giggle when I woke up.

In today’s blog, I’ve still got my paring knife, but this time I’m moving on to another green ingredient, cilantro. Sometimes I get a certain ingredient in my head and this is how dinner develops.  This is all fun and games except that measuring is not my strong suit so the recreation of recipes becomes diﬃcult.  But on this particular occasion I paid enough attention to deliver a consistent dish two nights in a row.  (Yes we liked it so much the ﬁrst time I made it again a second night.) I would call this a Midwestern inspired salad with cilantro pesto as the dressing.

The salad can be whatever you like – I went with the kitchen sink salad which included mixed greens, corn, black beans, avocado, grilled onions, cucumber, and tomatoes with a grilled and crumbled black bean burger on top.

With a little Googling I discovered that historically cilantro pesto was even more common in the Mediterranean than basil – who knew?  I know the concept of using greens other than basil in pesto is simple but I had just never made the leap.  The cilantro pesto is so good!  I understand that there are certain people who hate cilantro to their core – even being dubbed ‘cilantrophobes.’ That is not me. Today I am a cilantro pesto convert and am happy to share this recipe.

Directions:
Depending on the size and power of your food processor, the directions may vary a bit.  My food processor is very small so I have to ﬁrst blend the cashews and garlic to ensure they are processed enough before I add in the cilantro.

I also gave the cilantro a rough chop before putting it in the food processor and then pulsed until it was pretty smooth, about 1 minute. Add the lemon juice and then the oil and pulse for a minute or two more.  Add salt and pepper to taste, pulse it a few more times and you are ready to serve.  You can use cilantro pesto as a dressing on salad or let your imagination go and invent your own dish.  I have many future plans for this pesto! Enjoy!