Spotlight on the Best of Portugal

What comes to mind when you think of Portugal? Wine? Art? Cork? Or food? If you’re like us at Oldways, we think of food, and Portugal has some exciting food that we are happy to spotlight as among the Best of Portugal. 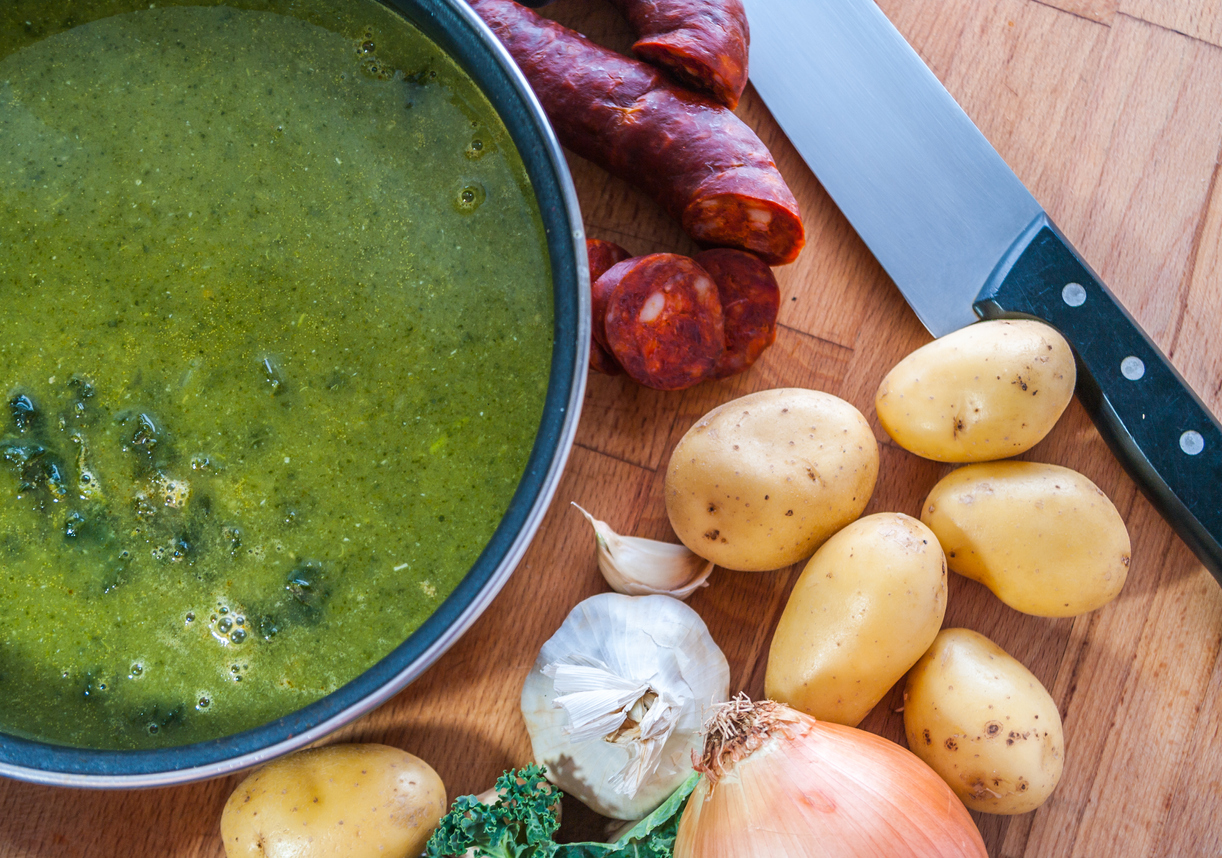 Soup. First on the list, and often ﬁrst in a meal, is soup. As Ana Patueleia Ortins wrote in Portuguese Homestyle Cooking, “Light or hearty, soup has always been a mainstay of the Portuguese diet.” The classic Portuguese soup is Caldo Verde, which means green broth, and is traditionally made with Galician cabbage, which has large, ﬂat leaves. To make the soup, the leaves are rolled like a cigar, and then cut at a diagonal into long thin stripes—a chiﬀonade. While this soup traditionally includes a slice of pork or sausage, there are many vegetarian versions as well. Jean Anderson, writing in her classic book, The Food of Portugal, writes “Obviously, because some Portuguese ingredients are often unavailable here, concessions must be made. Collards, kale or turnip greens, I’ve found, make a good substitute for the Galician cabbage; spinach may be used in a pinch; even mustard greens, provided you shave them ﬁne enough to cook quickly. As for the sausage, use a Spanish chorizo or Italian pepperoni if the Portuguese chouriço is unobtainable.”

Açordas, and migas are soups or stews thickened with bread. Açordas, are garlicky bread soups, and they diﬀer from region to region. In her book, the Food of Spain and Portugal, Elisabeth Luard writes that “Lisbon’s açorda, or bread soup, is made with fresh seafood—usually prawns (large shrimp)—and tends to have a risotto-like texture. Although city folk traditionally prefer the elegance of white bread, cornbread makes a particularly good seafood açorda, as the sweetness of the crumbled cornbread works well with crustaceans.”  In the Alentejo region, Açordas a Aletejana is a bread and garlic soup with coriander. Migas are much thicker and meatier. 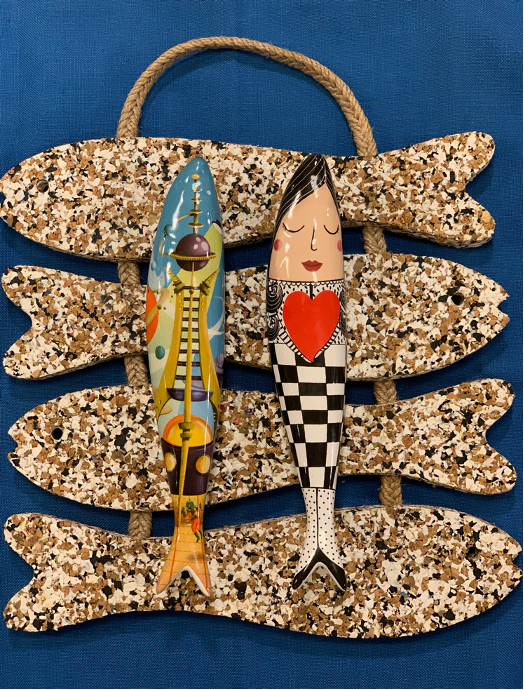 Sardines. Sardines are so Portuguese that all over Portugal you’ll ﬁnd sardines not only on menus, at the table and in cans displayed in stores throughout the country, but also made into elegant ceramics by Bordallo Pinheiro, and featured in tourist shops on coasters, posters, t-shirts, trivets, postcards and more. We love the ceramics and trivets, and most importantly, we can’t resist the sardines on a plate!

Fresh sardines, straight from the grill, are a wonderful and simple treat. Olive oil and coarse sea salt are the only preparation needed. They’re served on bread, and often accompanied by potatoes and a salad. Sardine season is March-April to September-October, and it is suggested never to buy sardines on Mondays, because the boats don’t go out on Sundays. 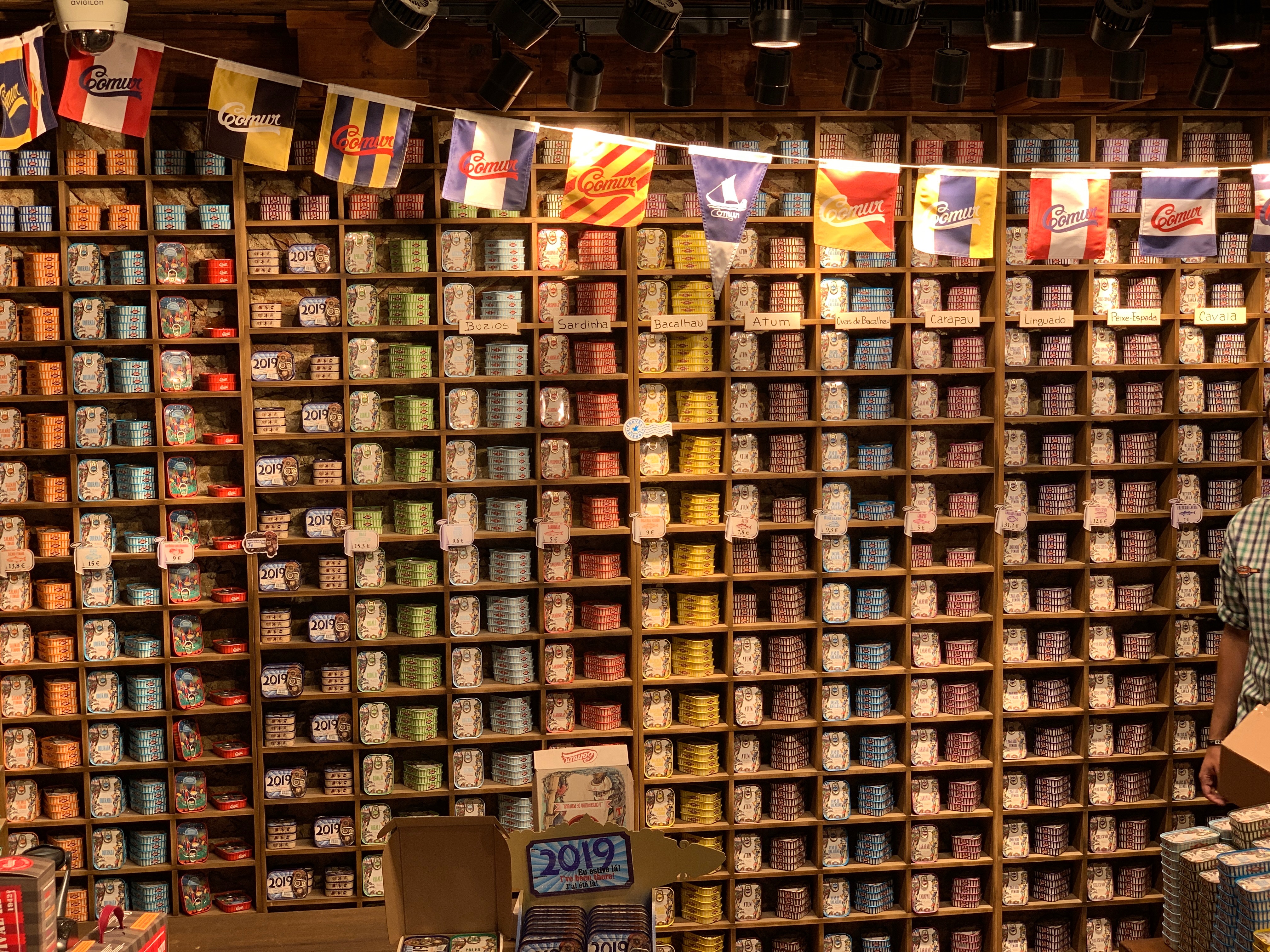 Canned or tinned sardines are another, everyday, all year long thing. Saveur has a wonderful article, “How The Sardine Became a Portuguese National Icon,” which describes the history of tinned sardine. Interestingly, “although the practice of canning ﬁsh oﬃcially began in 1824 in Nantes, France, it was in the 1850s that it really took oﬀ in Portugal. Sardines were the ﬁsh du jour of that time, and their abundance and impeccable quality—coupled with the country’s extensive coastline and ancient ﬁshing traditions—sparked the industry’s genesis.”  There are stores throughout Portugal selling vast varieties of conservas (tinned seafood) with interesting and whimsical designs. One of our favorites, and one that we’ll visit in April 2022 during the Oldways Portugal Culinaria with Chef John DaSilva of Chickadee Restaurant in Boston, is Miss Can. 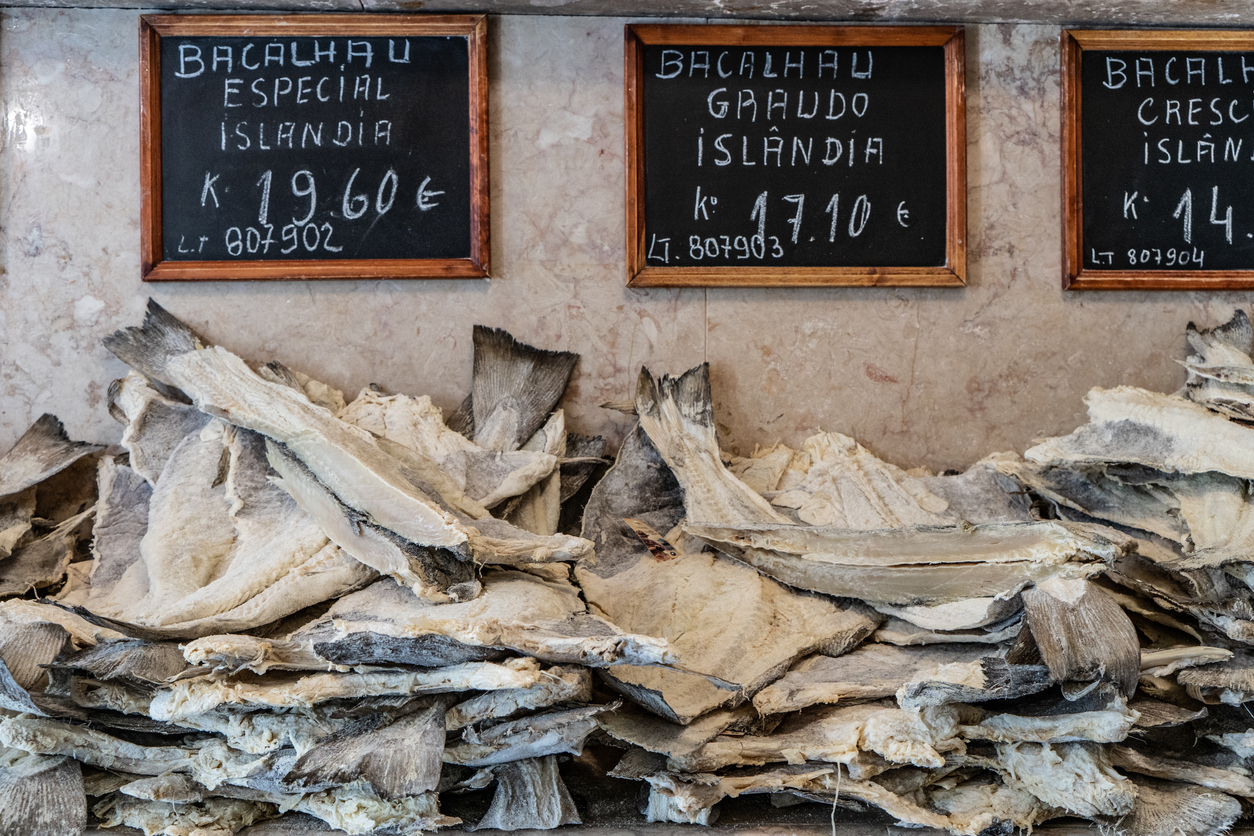 Bacalau. We love sardines and we also love bacalau, salt cod. To understand more we looked to David Tanis in The New York Times who writes, “Salting and drying codﬁsh changes the ﬂavor, deepens it. Portuguese cooks say there are over a thousand ways to prepare it. Garlic is usually an ingredient, and potatoes are nearly always an important part of the preparation. Salt cod can be baked, pan-fried, shredded for salad, made into fritters or turned into a stew. And that’s just scratching the surface.”  Among the thousands of recipes, a few of the very traditional bacalao dishes are Roasted or grilled cod with potatoes, codﬁsh cakes and fritters, and salt cod stew. 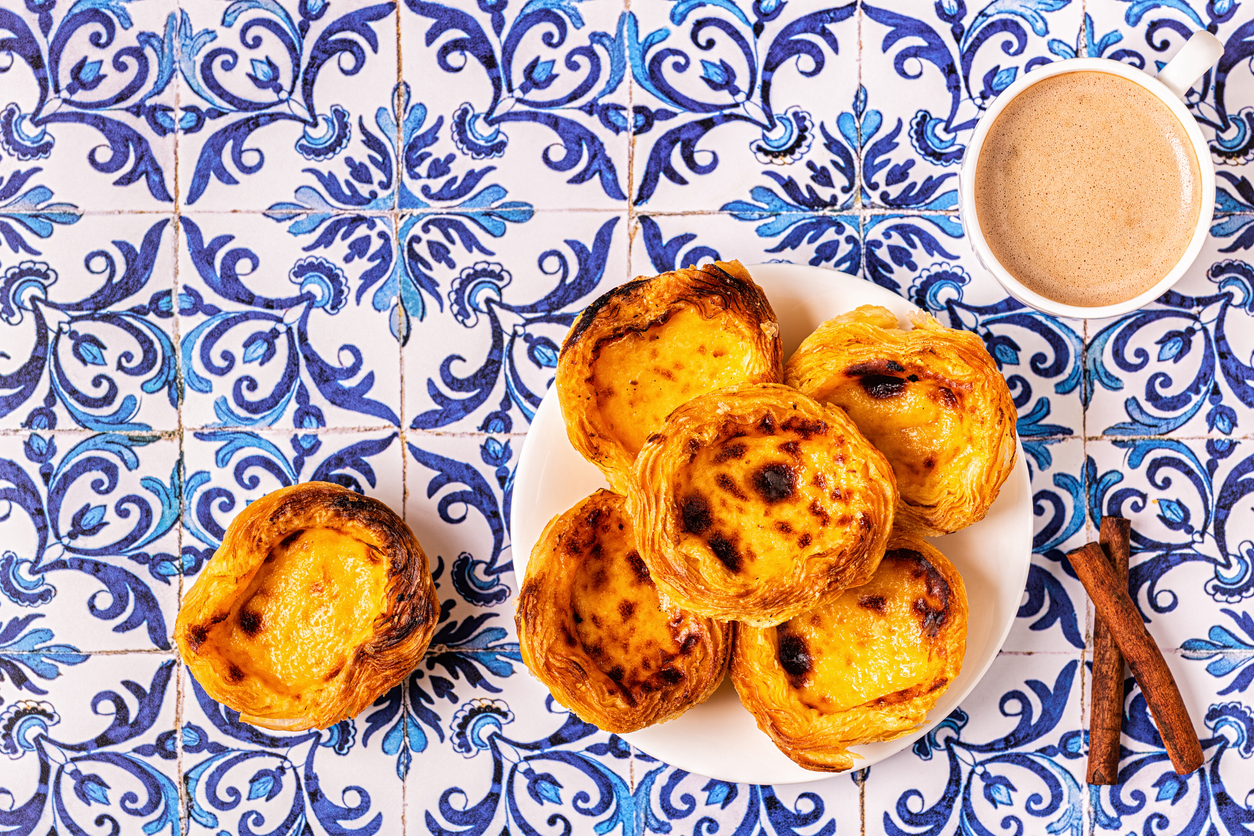 Pastel del Nata. Simply, pastel del nata is an egg custard that is a classic and very popular Portuguese pastry and is found all over the country. You cannot visit Portugal without sampling at least one pastel del nata. The most famous place to do this is Pastéis de Belém, a pasteria in Belem, a Lisbon neighborhood. On their website they explain the history, In 1837 we began making the original Pastéis de Belém in order to survive after the monastery was closed following a revolution. The ancient recipe from the Monastery in Belem (Mosteiro dos Jerónimos) is recreated every day in our bakery, by hand, using only traditional methods. Every day, you’ll ﬁnd a long line out the door, waiting to taste this warm, sugary, buttery treat.

Port Wine. As the beautiful book, A Journey Through the Douro Valley, states, “Port wine is unquestionably one of the symbols of Portugal in the world. It acquired its name from Porto (o porto, the port) from where it was exported via the city’s river port. 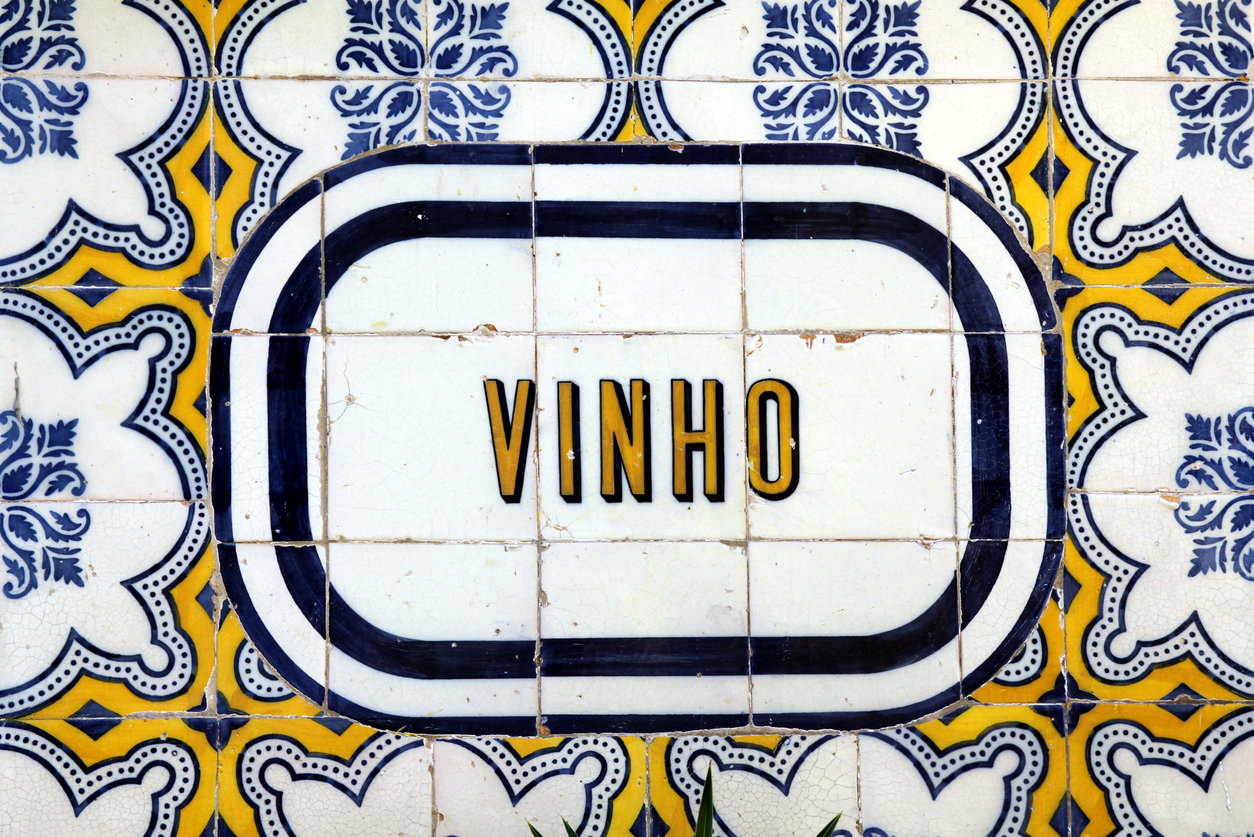 First, before going into its long and interesting history, what is Port? Port wine is a fortiﬁed wine, which means it has had distilled spirit, usually brandy, added to it, which increases its alcohol content.

The wine expert Kevin Zraly’s website, wine365 explains, “Port wine originated in Portugal, and the grapes used in the blending process grow in the Demarcated Region of the Douro in the Douro River Valley, one of the world’s most beautiful wine regions. (UNESCO has named the terraced vineyards here a World Heritage Site.) The Port houses lining both sides of the Douro bear the names of British gentry: Taylor Fladgate, Symington, Warres (among others). These names denote the strong ties between Portugal and England, which have inﬂuenced the making of this fortiﬁed wine known as Porto or vinho do Porto.”

The connection with England came about because King Charles II prohibited importing any French products, including wine. Enter Portugal, in part because Charles was married to the sister of the King of Portugal. The Methuen Treat of 1703 abolished import taxes on English wool sold to Portugal, and it lowered taxes on Portuguese wines brought into England, thus solidifying the military and trade alliances between the two countries. 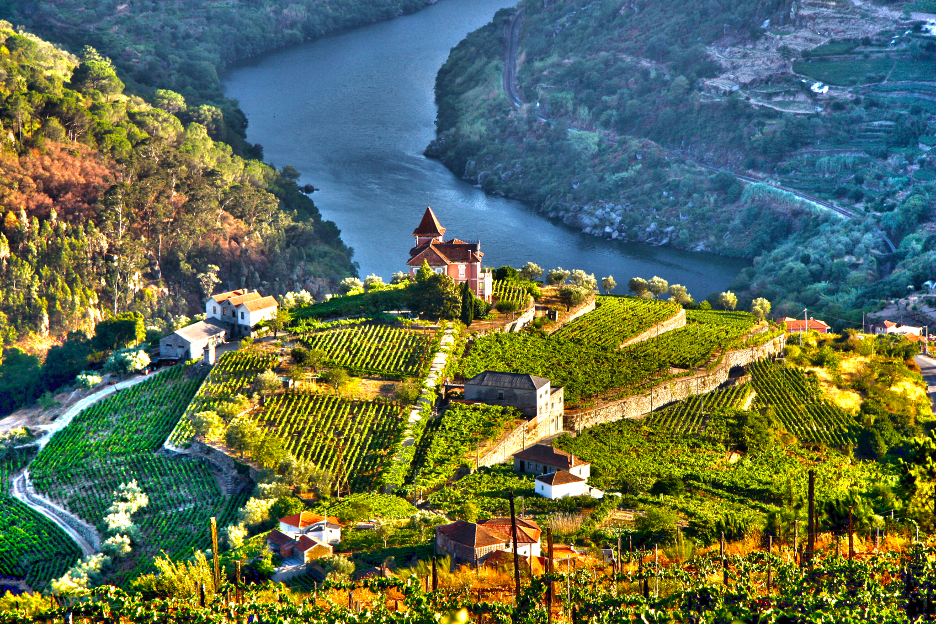 Port wine can be red, white, rose, or Tawny, an aged wine. To experience the exquisitely beautiful Douro Valley with its terraced vineyards lining the river, and to have a cruise along the Douro River in a Rabelo, a traditional boats that transported the barrels of wine downriver from the Douro Valley to Vila Nova de Gaia, where wine was stored and sold, just across the river from the city of Porto, you can join the Oldways Culinaria in Portugal in April 2022.

Wine.  Portugal is known for more than port wine. There are 14 wine regions in Portugal to enjoy! Best known, other than port, are Vinho Verde, young wines from the North, Bairrada from the center coast and Madeira wines from the Portuguese island of Madeira, oﬀ the coast of Africa. And where there is wine, there is olive oil. Portuguese cooking requires olive oil, and the region of Alentejo has the highest production of olive oil, making two thirds of the country’s production. 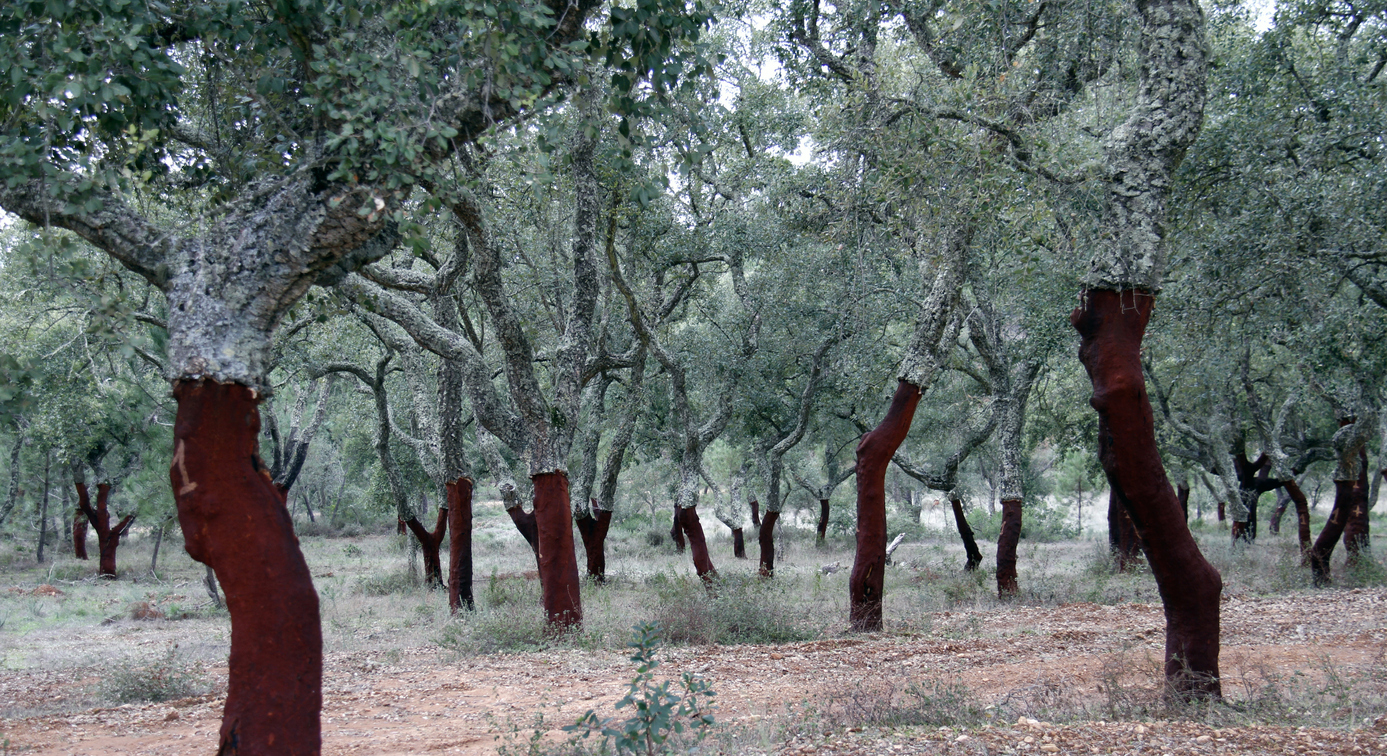 Cork. Related to wine, Portugal is known as the Capital of Cork. Like olive trees, the cork trees are mainly in the Alentejo region. The process for producing cork is a very long one – 25 years from an acorn to the stripping of the bark, and nine years before the bark has grown back to be harvested once again. Once seen, the sight of a harvested cork tree is one that is not forgotten.

The best of Portugal also reﬂects healthy lifestyles. A 2021 study conducted by money.co.uk (a free, online ﬁnancial product comparison) named Valencia, Madrid and Lisbon as the best places in the world to live and enjoy a pleasant and healthy life. The ﬁnal ranking was based on life expectancy, the cost to be healthy, air pollution, obesity rates, safety and sunlight hours. It is noteworthy that Spain and Portugal share healthy eating and lifestyle habits; the Portuguese and Spanish diets both feature seafood (Sardines! Cod!), olive oil, vegetables, eggs and whole grains.

Now, it’s time to uncork your bottle of Port or Portuguese wine, and start cooking!  Will you make Caldo Verde or bacalau, or perhaps open a can of sardines, and end with a pastel del Nata? For more recipes, try the Oldways recipe search and subscribe to Fresh Fridays. As they say in Portugal, bom apetite!