20 years ago, hummus was a strange foreign product to most U.S. consumers. Today, roughly one in four U.S. consumers has it in their refrigerator. Hummus’ success is partly due to its delicious taste, and partly due to the successful marketing campaigns that tie this Mediterranean staple food to American eating styles. Up-and-coming hummus companies marketed it as a healthy alternative to creamy dips, and as a convenient, on-the-go snack. Now, it’s mostly eaten that way in the U.S., as a dip with cut vegetables or pita chips.

But hummus has a lot more to oﬀer. In the Middle East, people have been preparing hummus for breakfast, lunch, and dinner for centuries. It’s traditionally served warm with a generous drizzle of olive oil and fresh herbs. Heartier versions are topped with cooked chickpeas, mushrooms, or a small amount of ground meat (often lamb).

Remarkably, the origins of hummus—which is an Arabic word for “chickpea”—are shrouded in mystery and remain the source of major international arguments today. Medieval recipe books dating back to the thirteenth century contain records of chickpea purée being served in Egypt and Syria, but it lacked key ingredients (like tahini, which is sesame paste) of modern hummus. Regardless of where it “started,” hummus gradually evolved to become a cuisine cornerstone across the Middle East and North Africa, with diﬀerent countries and cultures putting their own unique spin on the dish. 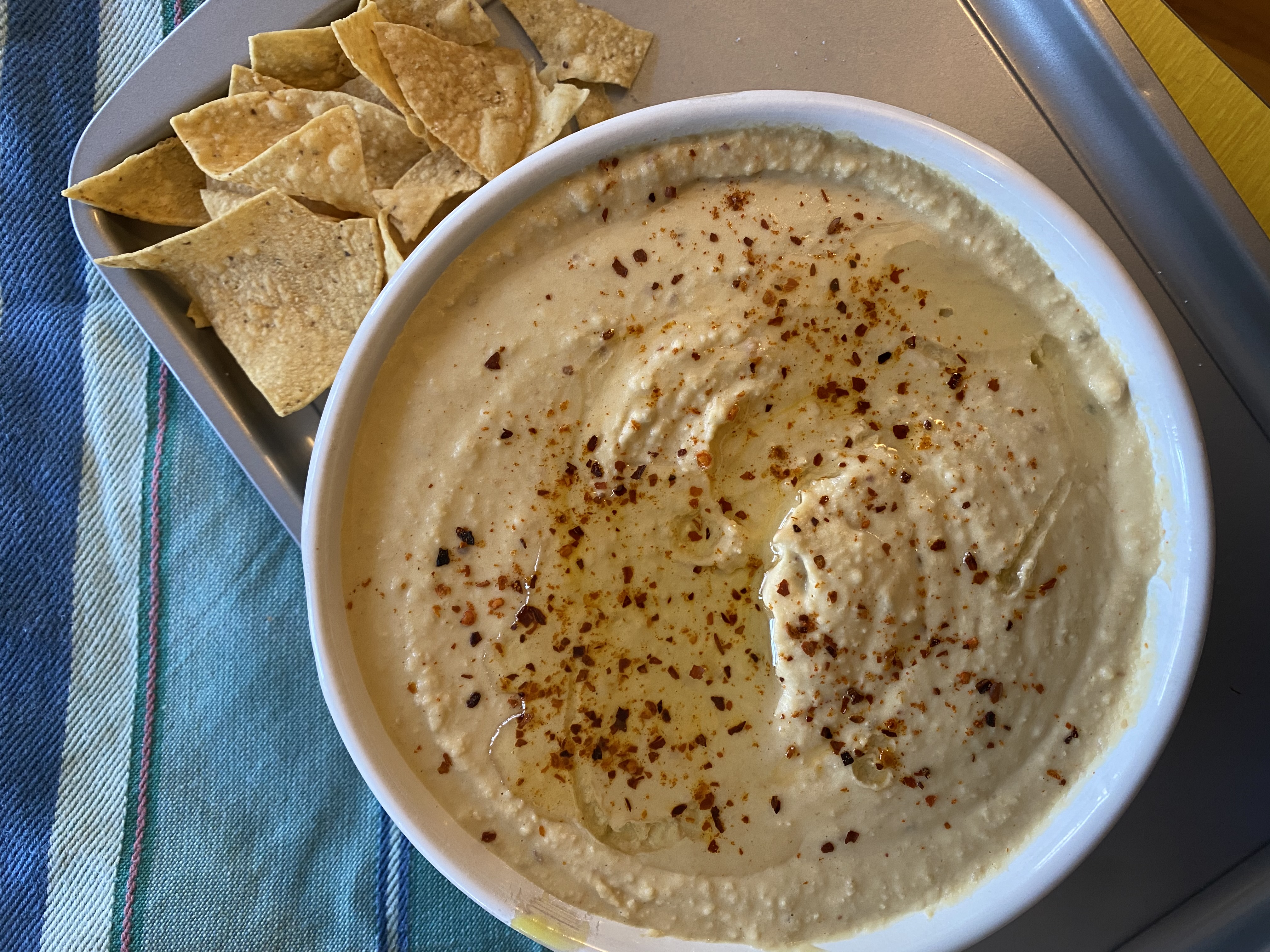 In many countries like Syria and Lebanon—two popular destinations for hummus aﬁcionados—hummus is part of a mezze, or an appetizer meal consisting of assorted small dishes. In Turkey, hummus is commonly served with pastirma, a cured meat similar to pastrami. Turkish hummus is also one of several varieties that may use yogurt as an ingredient. Meanwhile, hummus in North African countries like Egypt, Morocco, and Tunisia is commonly ﬂavored with local herbs and spices, like cumin, coriander, chili powder, cayenne, and paprika.

In Israel, there is even a name for restaurants that specialize in making hummus: hummusias. Hummusias serve hummus as the main dish, with pita, pickled vegetables, and maybe a hard-boiled egg or falafel on the side. Diners eat it like they would a soup or stew, by the spoonful. While hummus is particularly popular at lunch in Israel, it is a common breakfast dish in Palestinian cuisine.

In what may come as a surprise, hummus is not central to traditional Greek cuisine, even though many people think it originated there. While chickpeas are grown in Greece, they are more customarily used in stews and soups, salads, and patties. Fava and tzatziki are examples of more popular Greek spreads and dips. In an interesting twist, Greece’s neighbor to the north, Bulgaria, is not necessarily known for its hummus, but its chickpeas are strongly recommended for some of the proclaimed tastiest hummus recipes.

Change Up Your Hummus Routine

If you’ve never been to a hummusia or tried homemade hummus, the experience is worth the eﬀort. Super smooth, homemade hummus is divine. Soak and cook dried chickpeas for the best results, or use canned chickpeas for similar ﬂavor. A few pulses in a food processor (or grinds in a mortar and pestle if you want to be old school) with lemon, tahini, and garlic, and you’ve got a delicious, versatile spread.

If you’re looking for even more ways to use hummus (homemade or store-bought), think of its essential ingredients listed above, and ﬁgure out what pairs well with them. It’s hard to go wrong with most Mediterranean foods. Here are just a few ideas: 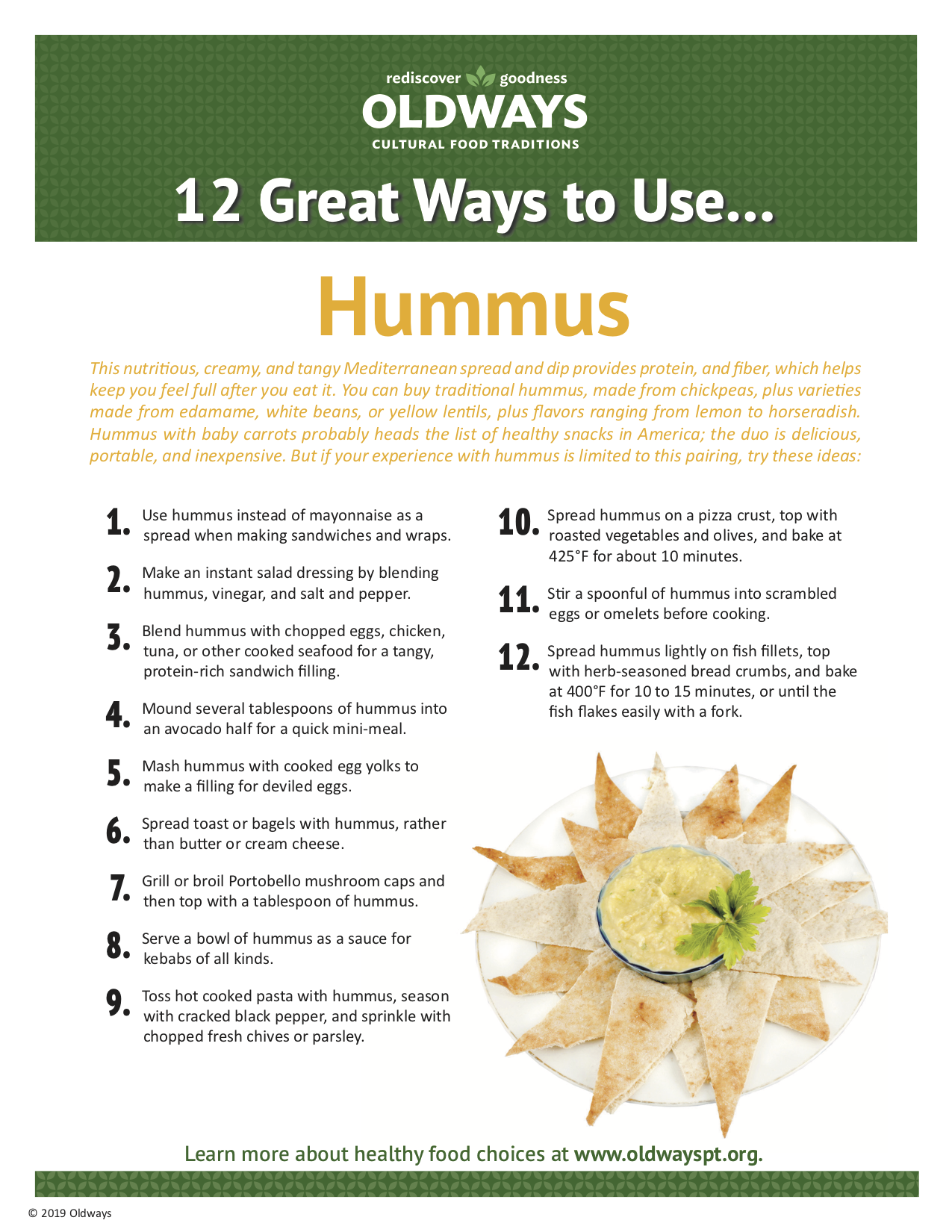 For even more ways to use hummus, download our 12 Great Ways to Use Hummus.

Hummus is delicious, and now, it is a force for good, too! Our friends at Al Wadi Al Akhdar are oﬀering a #HummusForLebanon kit that aims to help Lebanese children ﬁll their tummies.

With each Al Wadi #HummusForLebanon kit that is purchased, two cans will be donated to a Lebanese child through the SOS, Himaya, Oumniati, and Ayadina; four reliable NGOs that are active all around Lebanon.

To raise awareness about this initiative, and make a bigger impact, people will be encouraged to join “the longest virtual chain of hummus.”

Learn how to participate in the video below!