From pizza to sushi, many globally inspired dishes have earned a permanent place on American menus. Now, thanks to our insatiable appetite for hummus and Greek restaurants, it seems that Mediterranean food is next on the list. 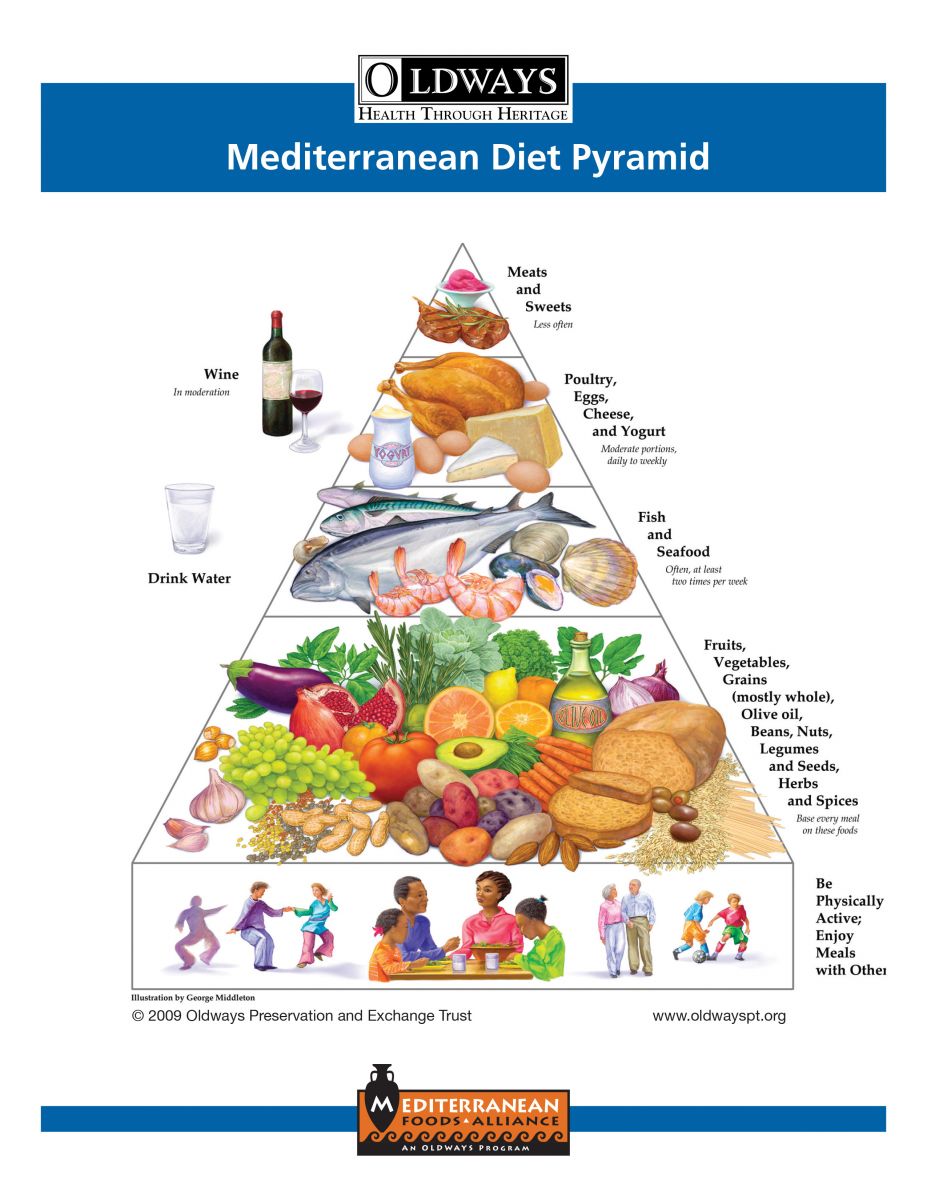 “If we’re developing a recipe, we do research and ﬁnd 10 to 20 recipes for each dish,” said Suzannah McFerran, an executive food editor at America’s Test Kitchen who helped work on the book. “We make ﬁve of them that are all diﬀerent with their approach, and taste them side by side. Then we put together a working recipe.”

America’s Test Kitchen, the publishing powerhouse also responsible for Cook’s Illustrated, Cook’s Country, and Cook’s Science, epitomizes American cookery. But when demand for Mediterranean inspired recipes began pouring in, they set their sights on a diﬀerent culture and cuisine.

“It was a fun project, and it took us a little bit out of our norm. We don’t usually focus on a speciﬁc region,” explained McFerran. “Our customer base and fans let us know that they did want a book that tackled this. The Mediterranean diet reﬂects a way of eating that people want to eat.”

Holistic approaches to nutrition and wellness are catching on as the national discussion of food has heightened over the past 8 years. The great thing about the Mediterranean diet is its emphasis on freshness, ﬂavor, and variety — not deprivation. Plus, if your kitchen is stocked with fresh herbs, citrus, and spice blends, you’ve got the three essentials for great Mediterranean recipes. “Topping a dish with a yogurt sauce or a vinaigrette,” is another Mediterranean-inspired ﬁnishing touch that puts a recipe over the edge, according to McFerran. 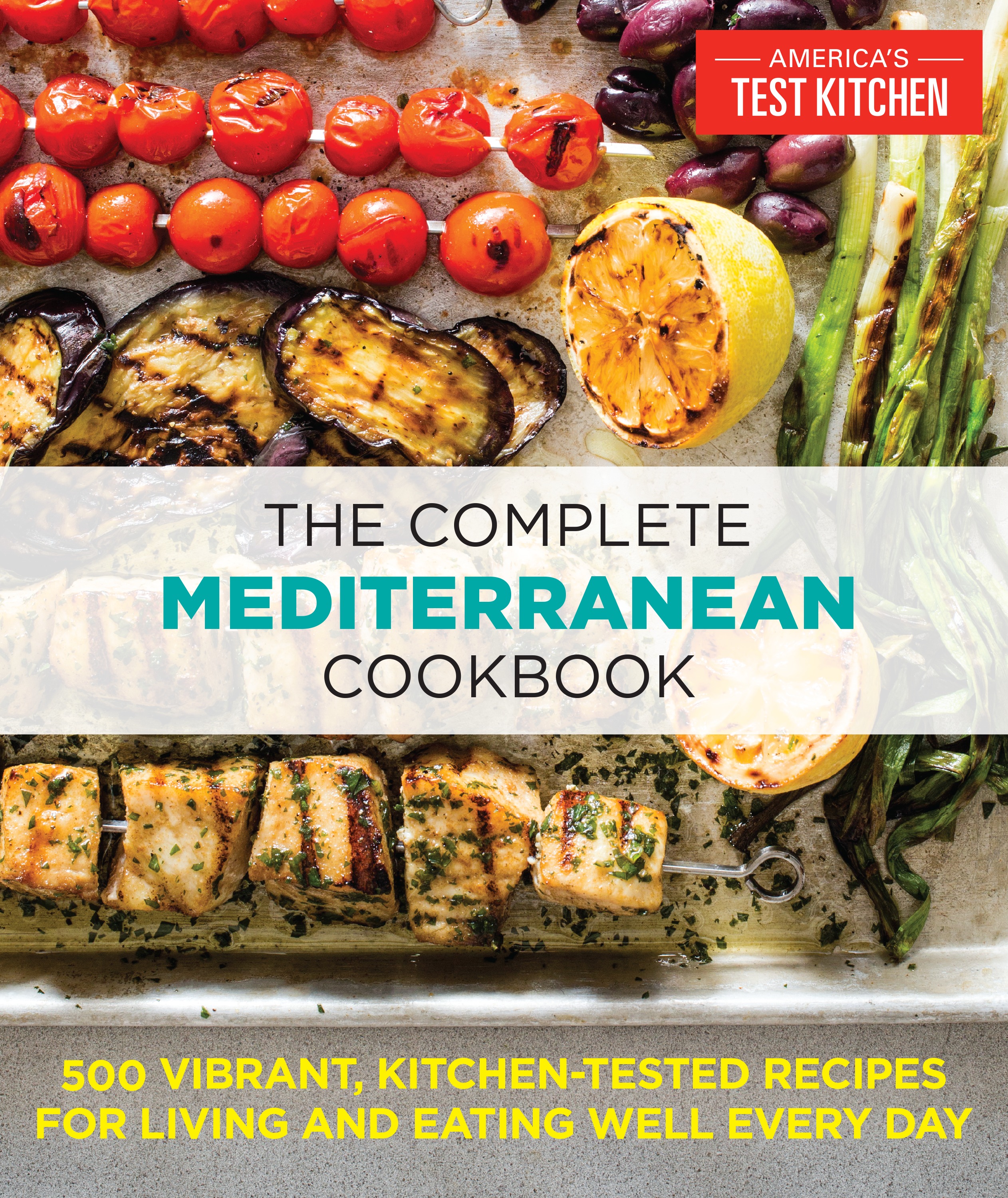 One of the most striking diﬀerences between this recipe collection and standard American fare is the favored protein source. “We did a lot more beans and ﬁsh in this book than we’ve ever done in a book,” explains McFerran. “Eating less red meat and trying to ﬁgure out what to replace it with is taking hold in this country.” For this reason, McFerran predicts that we’ll “see people eating more ﬁsh” in the coming year, in line with the growing appreciation for Mediterranean diets.

This book comes at a sombering time for traditional diets around the world. The United Nations Food and Agriculture Organization reports that the Mediterranean diet is being threatened by climate change, a misuse of natural resources, and a loss of young talent in farming. But by shopping locally and getting more comfortable in the kitchen, we can help reverse trend.

“I think one of the things that’s lost the most here [in the US] is families cooking together,” explains McFerran. “Bringing them into the process in the kitchen is part of the magic in that region [the Mediterranean] and in cooking in general.” 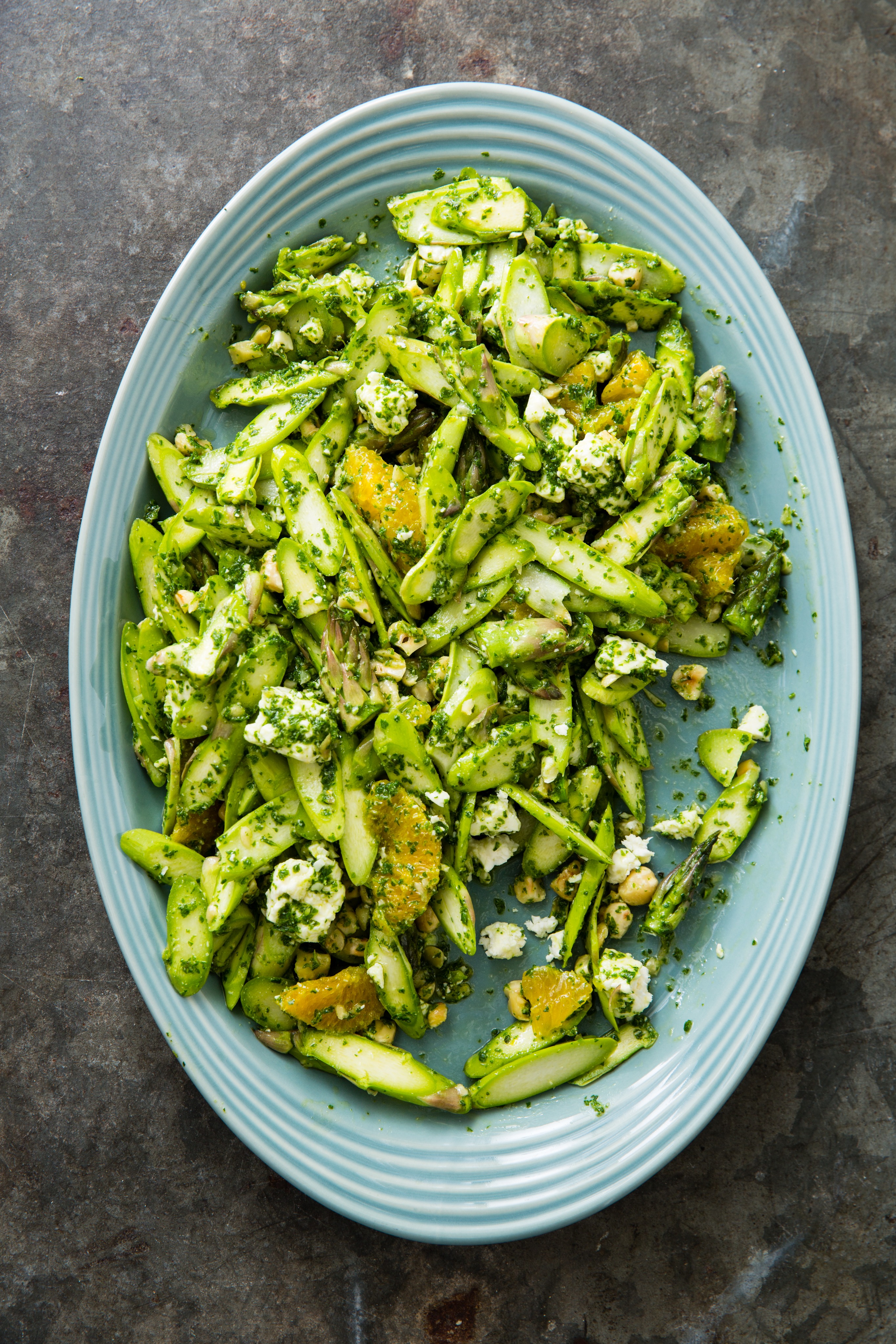 Instead of roasting our asparagus, we took a much diﬀerent approach and made a fresh, vibrant salad with raw asparagus. Slicing the spears thin was key to keeping them crunchy, not woody. An herb-based dressing complemented the freshness of the asparagus. Sweet orange segments, briny feta, and toasted hazelnuts were the ﬁnishing touches.

1. FOR THE PESTO: Process mint, basil, Pecorino, lemon zest and juice, garlic, and ¾ teaspoon salt in food processor until ﬁnely chopped, about 20 seconds, scraping down sides of bowl as needed. Transfer to large bowl. Stir in oil and season with salt and pepper to taste.

2. FOR THE SALAD: Cut asparagus tips from stalks into ¾-inch-long pieces. Slice asparagus stalks ⅛ inch thick on bias into approximate 2-inch lengths. Cut away peel and pith from oranges. Holding fruit over bowl, use paring knife to slice between membranes to release segments. Add asparagus tips and stalks, orange segments, feta, and hazelnuts to pesto and toss to combine. Season with salt and pepper to taste. Serve.