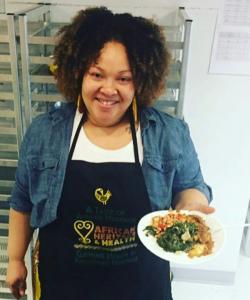 LaShell discovered the A Taste of African Heritage (ATOAH) program while working as a nutrition student intern.  She was on a journey to ﬁnd culturally relatable nutrition information to supplement her coursework and strategies for helping those most aﬀected by health disparities.  The ways in which Oldways tied African culinary traditions to modern African-American foodways sparked LaShell’s interest and she decided to become an Oldways ATOAH teacher.

LaShell has a passion for helping vulnerable populations establish healthy relationships with food and gain access to fruits and vegetables.   She derives this passion from her family — four generations of landowners and food cultivators from Alabama, including grandparents who grew their own food and prepared homemade meals, rarely visiting a grocery store.  Her grandmother made jams and pickled vegetables in her kitchen, and was the ﬁrst to teach LaShell how to grow food.  LaShell was later introduced to the ﬁeld of dietetics during a family member’s battle with pancreatic cancer, the loss of whom inspired her to become a Registered Dietitian.

A former IT professional of over ﬁfteen years, LaShell enrolled in a dietetics program in 2012.  She began teaching the ATAOH classes during her time working as a nutrition research and education intern.  As part of the University of the District of Columbia’s Center for Nutrition, Diet and Health Nutrition Education Program, LaShell piloted ATAOH at a Federally Qualiﬁed Healthcare Center (FQHC) in DC’s Ward 7, where she taught patients impacted by chronic diseases.  She was able to demonstrate the eﬀectiveness of the Oldways program at the end of the series, and she presented the evidence to the DC Department of Health.   She was invited to feature the UDC/ATAOH pilot on a local television news program (please provide link — http://wjla.com/news/lets-talk/celebrate-black-history-month-with-nutritious-african-culture-based-cuisine) during Black History Month.

LaShell earned her Bachelor of Science in Nutrition and Dietetics degree from the University of the District of Columbia in 2015.  She also earned a certiﬁcate in Sustainable Urban Agriculture from the same institution.  Since then, LaShell has worked as a WIC nutritionist in Prince George’s County, Maryland.  She continues to work towards becoming a Registered Dietitian, as she plans to enter into a dietetic internship.  She currently teaches the ATOAH classes in DC and Prince George’s County, and she loves doing so because ﬁnds student feedback personally rewarding.  During her free time, LaShell maintains a home vegetable garden, enjoys sharing culinary ideas with her sister, Chef Teo, and plays the Djembe drum.  She has one son, to whom she teaches cooking and food growing fundamentals.

She is grateful to Oldways for establishing a platform that allows nutrition educators to reach communities across the African diaspora.  Her favorite ATOAH recipe is the Black Eyed Pea Salad, and her favorite quote to live by is, “Do it for the story.”  She believes personal narratives change lives, and she plans to use hers to advocate for persons most aﬀected by food and nutrition inequity.

Learn How To Start Your Own Class Series