Traditional Cheese: Back to the Future

The Cheese of Choice Coalition (CCC) was an eager participant in the recent Yale Food Systems Symposium. Bringing together academics, practitioners, activists, and eaters alike, the annual conference encourages educated interdisciplinary dialogue. The goal?  To explore innovative solutions to a long-standing problem: how do we create a more just, healthy and sustainable food system. Oldways has been working on this and related problems for a quarter century and we were excited to share our insights. How do we create a provisioning model that is equitable, nutritious, and environmentally-friendly? It’s not as complex as it sounds. We turn to tradition. 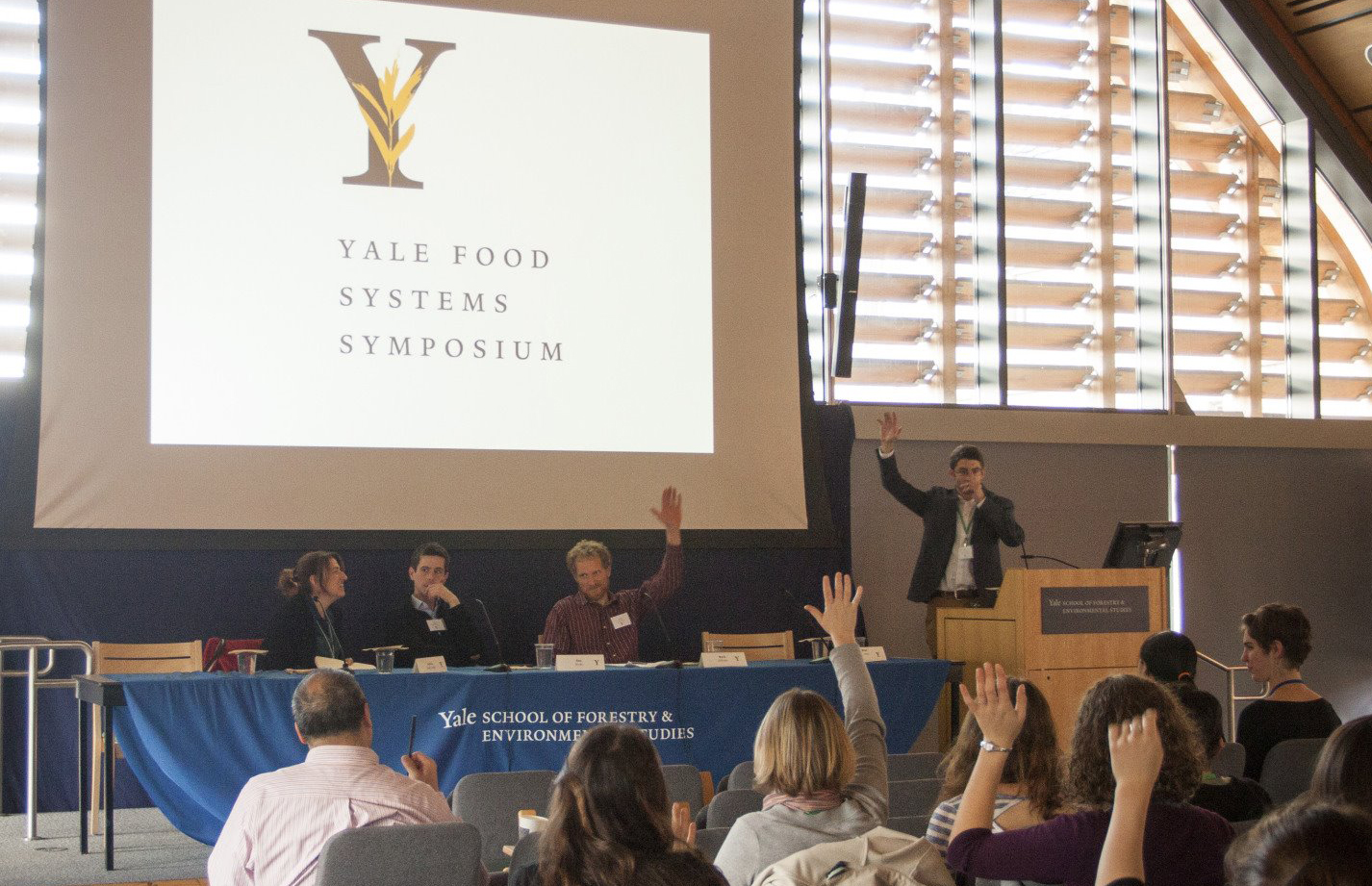 The Cheese of Choice Coalition (CCC) was an eager participant in the recent Yale Food Systems Symposium. Bringing together academics, practitioners, activists, and eaters alike, the annual conference encourages educated interdisciplinary dialogue. The goal?  To explore innovative solutions to a long-standing problem: how do we create a more just, healthy and sustainable food system.

Oldways has been working on this and related problems for a quarter century and we were excited to share our insights. How do we create a provisioning model that is equitable, nutritious, and environmentally-friendly? It’s not as complex as it sounds. We turn to tradition.

The theme of the CCC panel, “Back to the Future: Explorations of Traditional Cheese,” was inspired by a quote from artisan cheesemaker Steve Getz of Dancing Cow Farm in Virginia. Quoted in CCC advisor Heather Paxson’s fascinating book The Life of Cheese, Getz reﬂects, “It’s a very pleasant place to farm, but this is a farm in transition…We bought this farm from a young man who had the cows locked up 365 days a year, heavily drugged, and the ﬁelds plowed edge to edge for corn silage. I took two contractor bags of syringes out of the manure pile. And so it’s been a series of cleaning this up from what was done to this farm over time. So in going back to some of the traditional techniques, I see a farm going back to the future.”

Innovation across the sustainable food system largely means looking backward. More resilient than the agro-industrial model for which we’ve grown accustomed, when we turn to tradition we ﬁnd examples of provisioning models with long histories of producing healthy communities, healthy economies, healthy environments, and healthy food. Cheese is a perfect case in point.

In the interdisciplinary spirit of the Yale conference, the CCC invited a cheesemaker, cheese retailer, and cheese scientist to discuss the importance of traditional cheese from their own unique vantage points.

Mark Gilman, head cheesemaker at Cato Corner Farm, gave an overview of his Colchester CT farm, discussed how artisan cheese is made by hand, and emphasized the challenges and rewards of being a raw-milk cheesemaker. From his herd of pastured-jersey cows, Mark makes a number of very highly respected and award-winning cheeses (two delicious examples of which he brought along for us to taste!). He gives credit to the quality of the raw-milk and traditional production and aging practices.

Although raw milk produces exceptional and complex cheese, abundantly expressive of its origin, it also requires great care and conscious cheesemaking practices. Nevertheless, Mark emphasized that choice and safety are far from mutually exclusive: we can have our cheese and eat it too! But, he argued emphatically, if we want our cheese of choice we will have to ﬁght for it. Mark urged the audience to join the Cheese of Choice Coalition and the Farm to Consumer Legal Defense Fund. He also encouraged everyone to advocate for common sense regulations and to spend the extra money on artisan foods, both of which are necessary to protect small farms and traditional practices.

Sylvia Sobocinski, manager at Caseus Fromagerie and Bistro in New Haven, argued that care and consciousness do not stop at the production level. She emphasized the need for small-scale retailers to participate in their local economy, to buy from local producers, and to represent these high-quality products responsibly. Because so much of the alternative food economy revolves around breaking down the barriers between how food gets made and how it ends up on your dinner plate, Sylvia emphasized that education is a vital part of her job at Caseus. Traditional cheese is more expensive because it costs more money to make cheese of truly exceptional quality: through formal classes and informal storytelling, Sylvia proudly shares what makes artisan foods extraordinary to every customer that walks through the door. When selling a cheese from Cato Corner, for instance, she strives to represent Mark as genuinely as possible.

But life for a retailer of traditional cheese is not without its challenges and much of it has to do with managing customer expectations. Traditional cheese is a naturally preserved food (without preservatives) which means it is also highly perishable. Traditional cheese is also seasonal so customers have to be ﬂexible when it comes to wanting goat’s milk cheese while the kids (baby goats) are being born in the spring or demanding burrata-style cheese in winter. But the biggest hurdle she faces are the shifting regulatory goal posts that are keeping exceptional cheeses, like French Roquefort and Rush Creek Reserve from Wisconsin, oﬀ the shelves. Customers want these cheeses and ask for them by name. Sylvia hopes that government oﬃcials will begin to agree on the importance of these traditional style cheeses.

Ben Wolfe PhD concluded the session by moving from the big picture of traditional cheese, its production and consumption, to microscopic features invisible to the naked eye. Dr. Wolfe is a microbiologist at Tufts University outside Boston and makes the fascinating work of microorganisms truly come alive. While you and I go into a specialty food shop and see piles of cheese stacked upon one another, Ben sees microbial galaxies. From his experiments analyzing petri dish cheeses in the laboratory Ben has learned a great deal about the way in which yeast, bacteria, and fungi interact to form the complex communities of microorganisms otherwise known as a cheese rind. Ben quips that his job is to discover the intricacies of microbial war and peace.

Ben’s work is not only interesting in its theoretical aspects, it is important for many practical reasons. First and foremost, scientists really have very little understanding of the way that the ambient microbes in our environment interact. Viewing their relationships on a particular medium, the rinds of natural cheese, open a window into the complex world of microbial ecology. While the role of cheese in this research is to an extent arbitrary, a means to an end, Ben’s work has lent many insights of great importance to traditional cheese and cheesemakers. Is there such a thing as microbial terroir and do cheese rinds diﬀer in any fundamental way in France, Vermont, and California? What is this unexpected growth on the rind, where did it come from, and how do I get rid of it?  By isolating microbial strains, can we engineer diversity and create new, delicious cheeses? By better understanding microbial interactions, can we create controlled environments where good bacteria work on the cheesemakers behalf to ensure cheese that simultaneously is microbiologically vibrant yet safe and healthy? The list of beneﬁts, and possibilities, is endless.

In sum, what Mark and Sylvia and Ben made clear was that traditional cheese, its production, sale, and microbiological activity, is at once simple and very complicated. It is up to us a conscious consumers to appreciate this complexity and to value it as a keystone to a more sustainable food system.

As for the goal of the symposium, at the end of the day I like New York Times food columnist Mark Bittman’s response to how do we change the food system. “We elect representatives who understand what’s wrong. We petition. We make noise. We don’t settle for the grudging, halting, sometimes downright stupid changes that government agencies make, but demand more. We don’t know the end but we push for progress. We don’t quit.” For twenty-ﬁve years now, Oldways has pushed for progress and made a great deal of it. As Mr. Bittman urges us, until we all realize that through heritage comes health, we refuse to quit. Let us all look back to a more sustainable and delicious future.