Following on the recent popularity of blogger Julie Powell’s 2002 epic endeavor to cook all of the recipes in Julia Child’s first book (which inspired the movie, “Julie and Julia”), two New York City vegans, Dan and Annie Shannon, set out on their own mission, to write a cookbook that serves to veganize many of the popular recipes from the 2010 edition of the Betty Crocker Cookbook.   We caught up with Annie recently to chat about their new book.
Q & A 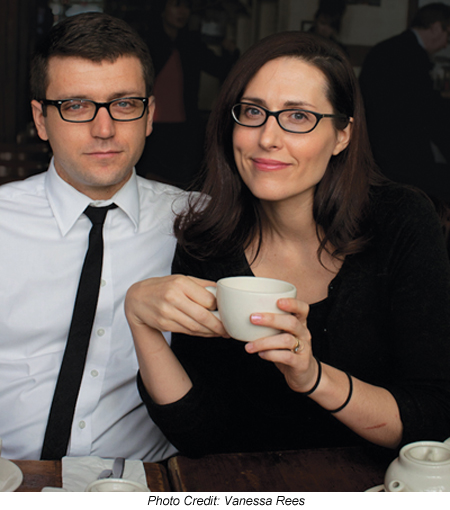 Following on the recent popularity of blogger Julie Powell’s 2002 epic endeavor to cook all of the recipes in Julia Child’s ﬁrst book (which inspired the movie, “Julie and Julia”), two New York City vegans, Dan and Annie Shannon, set out on their own mission, to write a cookbook that serves to veganize many of the popular recipes from the 2010 edition of the Betty Crocker Cookbook.   We caught up with Annie recently to chat about their new book, Betty Goes Vegan.

OLDWAYS: You write that you decided upon Betty Crocker as your muse when you saw the title in a bookstore.  Did this cookbook ﬁgure into either of your childhoods in some way?
ANNIE: I grew up with a Sicilian mom who never used cookbooks or cake mixes. I think in a way she never really understood a lot of typical American food. She used to call hot dogs “sausages for babies.” But when you grow up with a mom who sends you to school with a can of sardines, part of a baguette, and a handful of olives for lunch – well you start to develop a romantic appreciation for the American food you see in TV commercials.

Being able to really explore Betty Crocker’s traditional, sometimes outrageous but creative recipes was a real treat to me and the 6 year old inside me that always wanted to try cheeseburger pie and taco casserole.

OLDWAYS:  What surprised you the most when you set out to use these recipes as a framework for your book? 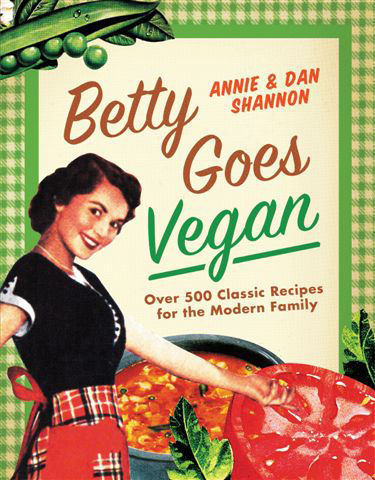 ANNIE: I have to admit what surprised me the most was how large the dinner and entrees sections were and how complicated it is to eat meat. When you think Betty Crocker – you think layer cakes and latticework pies. Those were in there but there were also thick sections that had detailed tips on how to pick cuts of meat out at the butcher’s and what temperature to cook poultry at so you wouldn’t get sick. As a vegan, these are things I rarely worry about. I make sure my vegetables are washed and clean and then enjoy my meal. I had completely forgotten about how many steps and concerns go into having meat in your kitchen.

OLDWAYS:  If you could turn back the clock and start writing your book all over again, what would you do diﬀerently?
ANNIE: Yes, there are a few things I would do diﬀerently. We kept a lot of the speciﬁc ingredients we used during our cooking project like Pink Himalayan Salt to stay true to the recipes we came up with during our three-year project. We had gotten a gourmet salt set as a gift around the time we started the project and fell in love with Pink Himalayan Salt. We found it was a great salt with vegetables and for baking. It complimented both chocolate and vanilla well. There are also some who claim it is the healthiest salt to use. It’s what we try to use in our kitchen most of the time so we kept it in the recipes to keep true to the project and what we made. But we get questions all the time why we use so much of this kind of salt.

We actually had originally included information in The Pantry section at the beginning titled “The World Must Be Salted” that explained that but because the book was already so big – it was cut. Little did we know it would be such a big deal.

OLDWAYS:  Can you share a few tips about how to take a standard recipe and make it vegan without sacriﬁcing ﬂavor or texture?
ANNIE: I would say the ﬁrst step is identifying the animal based ingredients and asking yourself what role does that ingredient play in the dish. Is the egg just for binding or is it the base of the recipe? Is the sour cream to thicken a sauce or is it to mute another strong ﬂavor? Once you ﬁgure out why the animal ingredient is in there, you can choose which way you’ll need to replace it.

For example, if you’re baking, you can replace an egg using ground ﬂaxseed or applesauce but if you’re making a quiche, you’ll need to use tofu or ground cashews.

A common mistake most people make when replacing meat in a recipe is just substituting mock meat for the real meat. This rarely works. Diﬀerent meats play diﬀerent roles in recipes. Some recipes require the “drippings” or fat from the meat for ﬂavor or moisture and so if you don’t add some additional olive oil and some seasoning, you end up with something dry and blander than what you expected. Mock meat also gets some of its ﬂavor from salt. So we always adjust the seasoning in a recipe or recommend using Bragg’s Liquid Aminos (a low sodium soy sauce substitute) or Better Than Bouillon (a low sodium broth) to keep our recipes from being blown out with sodium.

Vegan cheeses also don’t melt the same way dairy-based cheeses do. You can often end up with liquiﬁed or wet messes if you try to cook or bake vegan cheese at the same temperature or as long as their dairy-based peers.

OLDWAYS:  Some proponents of vegan cooking recommend avoiding foods that carry labels such as “vegan chicken” or  “vegan shrimp,” preferring to circumvent the idea that we need to keep ﬁll a gap when we move away from these bedrocks of the Standard American Diet.  You call for a number of these foods in your book.  Can you share your thinking about them?
ANNIE: One of the reasons we chose Betty Crocker for our inspiration for the book was because that brand has an impeccable reputation for teaching everyday cooks how to use everyday products in new and creative ways. We wanted to show what you can do with all the new and amazing vegan products that are on the market today. When Dan and I ﬁrst went vegan it was the 80s and vegan meats and cheeses were still in what we call their ‘Model T’ stages. Many vegans gave up on vegan products because of these early foods. And many vegans also gave up being vegan because they wanted these products but ‘food science’ wasn’t where vegans needed it to be. We wanted to reintroduce vegan products to the public in a way that we hoped would not only encourage more people to go vegan but also help some vegans stay vegan.

We also wanted to disprove the myth that there is only one way to be vegan. That being vegan means that you have to make everything from scratch and that you can never again enjoy favorites from your childhood. We were at a wedding once where they served as the vegan option a roasted onion instead of steak or chicken. While we were grateful they had a vegan option, both Dan and I agreed that there wasn’t a single meat eater at our table who was jealous or even interested in our meal. It was a sad meal that reinforced so many stereotypes of what eating vegan is about. We wanted our project to put that myth to bed.

Mostly we wanted to save animals. The new vegan products that are out today like Beyond Meat, Gardein, Daiya and Tofurky are just fabulous and the fact that they are available in many mainstream grocery stores is a huge victory for animals and veganism. We really want to encourage people to try these products not just for their own health but for the animals that they save.

OLDWAYS:  We’d like to share a recipe from the book with our readers. Which one would you point us to that’s also one of your favorites?
ANNIE: Avocado and Tequila Steakless Tacos! Here’s the recipe: 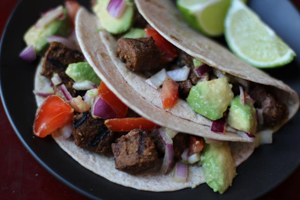 Directions:
In a mixing bowl, mix the tomatoes, onions, avocado, corn, 4 tablespoons of the lime juice, and salt with a large spoon. Cover with foil and put in the fridge to chill out a little bit.

If preparing your Salsa Verde from scratch – do so at this time and put it in the fridge next to the avocado mixture to hang out.

Put the remaining 4 tablespoons lime juice, tequila, jalapeno, cumin, Bragg’s, hot sauce, and garlic in a large mixing bowl and blend with a whisk. Pour this mixture into a heavy-duty resealable plastic bag and reshake to keep it blended. Add the vegan beef to the bag, seal the bag, and shake to cover the vegan beef completely.

Turn on the broiler or set the oven to broil. Use a slotted spoon to remove the vegan beef from the marinade. Place the vegan beef on a rack in a broiler pan. Place the beef 4 to 6 inches from the heat and broil for about 10 minutes, or until the beef gets lightly crisped edges. Be sure to turn your vegan beef at least once to make sure it cooks evenly. When you pull your vegan beef from the broiler, let it cool slightly so that you can eat your tacos without burning your face oﬀ.

Warm the tortillas in the oven as directed on the package. Serve your vegan beef, avocado mixture, and Salsa Verde in separate bowls with your warm tortillas and let folks make ’em as they eat ’em.

Salsa Verde
This is my favorite of all the salsas to ever salsa.

Directions:
Place all the ingredients in a cast-iron skillet, cover, and cook over medium heat

for 10 minutes.  Check on the salsa often and stir to blend the ﬂavors. Pour into a

food processor and blend until it is a smooth liquid. Put the salsa in an airtight container and chill for 20 minutes before serving.