Jody Adams Talks Travel, Food Adventures, Love and Octopus Thirty-three years ago I visited Greece.  It was a visit of firsts.  First time in Greece, first trip with my first husband, first trip since graduating from Brown University with a BA in anthropology a few months before.  I knew I wasn’t going to be an anthropologist, but beyond that life was up for grabs.  If I’d paid closer attention to the food experiences I had in Greece, I might have known what was in store for me. 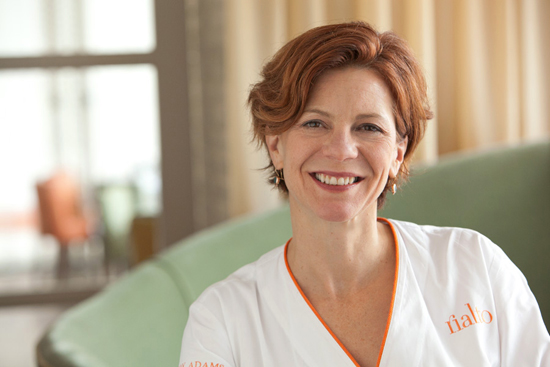 Thirty-three years ago I visited Greece.  It was a visit of ﬁrsts.  First time in Greece, ﬁrst trip with my ﬁrst husband, ﬁrst trip since graduating from Brown University with a BA in anthropology a few months before.  I knew I wasn’t going to be an anthropologist, but beyond that life was up for grabs.  If I’d paid closer attention to the food experiences I had in Greece, I might have known what was in store for me.

On the island of Corfu, we rented a small house, really a converted chicken coop, intending to stay only a couple of days before moving on to other islands.  Our landlord was a lovely man named Erasmus.  Two large pots of what I now know as “bush” or “piccolo” basil ﬂanked the doorway of the little house. Their tiny unprepossessing leaves were deceiving.  Erasmus taught me that if I ran my hands back and forth over their branches as I went in and out of the house they would release an unbelievable basil fragrance into the steamy air.  I was captivated.

We had a kitchen, we rented motorbikes, and spent a week shopping, cooking, eating and exploring.  I made salads out of local tomatoes, olives, feta and onions, dressing them with olive oil and piccolo basil in place of oregano.  I encountered fresh ﬁgs for the ﬁrst time.  Erasmus was delighted to show me how to eat them and I haven’t had any to match since.

On our last night, Erasmus invited us to dinner at his house.  He sat us at the kitchen table set only for two.  His wife and children watched from another room as he served us, refusing to sit down.  It was a little weird.  He brought us each a bowl ﬁlled with boiled fresh zucchini and then proceeded to pour dark golden olive oil over the zucchini, about a third of a cup for each of us, and sprinkle it with basil.  My husband, sat across from me, staring wide-eyed with panic as olive oil drowned his zucchini.  He looked up at me, the meaning plain: How can I eat this?  Erasmus then put a loaf of rustic bread under his arm and sawed oﬀ big slabs for each of us.  He was thrilled to have us in his home and so proud of the zucchini and olive oil.  Simple as it was, this was the meal.  I dove in.  My husband, alas, did not.  Understand, another decade and a half would have to pass before the beneﬁts of olive oil, let alone it’s taste, would percolate into mainstream American food culture.  At the time I didn’t know anyone ate so much olive oil in one sitting and I’d never tasted any as good as Erasmus’s.  My husband hardly tasted it at all.

I became a cook, I lost that husband, and my next trip to Greece was with Ken, the man of my dreams for the last 30 years, who has shared one food adventure after another with me.  One adventure was when Oldways invited us to a Mediterranean Diet Conference in Crete. We ate our way through the conference.  Fish, lamb, eggplant, a local wild green called horta, eggplants in honey with delicious local yogurt for breakfast, Greek mountain tea made from an herb called ditamas, a daily quest for grilled octopus, tiny handmade pastries ﬁlled with minced lamb.  We ate and ate and ate, and compared notes.  Our shared favorite was the octopus.  The ostensible focus of the conference was on the Cretan diet, but anyone who attended really knew that it was about the one thing that connected all of the culinary dots in the Cretan kitchen—olive oil.  Ha!  How appropriate. They pour it on everything!  And this time, my husband loved it.

Directions:
Rub the octopus with one lemon half, season with salt and allow to macerate for 30 minutes.   Juice the second half of the lemon and combine with the orange juice.

Heat 4 tablespoons of the olive oil in a large pot over medium heat. Add the garlic, and cook 1 minute, or until aromatic.  Do not brown. Add the octopus with the citrus juices, 1 teaspoon hot pepper ﬂakes, cover, and turn the heat to low. The octopus will slowly release its liquid. Cook for 50-60 minutes, until a fork slides through it easily. Allow to cool.

Put the pan with the octopus juices back on a medium burner and cook until reduced to syrup.   Reserve.

Preheat a grill to high.

Mix the remaining olive oil with the lemon zest in a large bowl.  Add the octopus pieces and toss well.  Grill over high heat just to mark them.  Toss with the reduced juices, oregano and parsley.  Serve with the warm mustard potato salad.