As America’s kids went back to school this fall, new school lunch standards went into effect under the National School Lunch Program. For those of us who are parents, taxpayers, or nutrition educators (I’m all three!), the new standards are good news. They call for more fruits, vegetables and whole grains, and for the first time put limits on total calories.
school 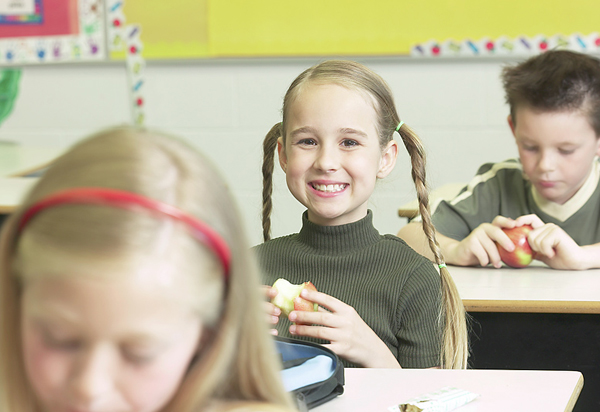 As America’s kids went back to school this fall, new school lunch standards went into eﬀect under the National School Lunch Program. For those of us who are parents, taxpayers, or nutrition educators (I’m all three!), the new standards are good news. They call for more fruits, vegetables and whole grains, and for the ﬁrst time put limits on total calories.

Nothing good comes easy, though. Lately the press has been full of reports of pushback, especially from high school students, who claim they are swooning from starvation under the new calorie limits or being forced to eat unpleasant vegetables. The simple truth, in many cases, is that kids are being asked to change their habits, and changing habits is never easy.

It’s widely thought that kids just won’t eat healthier foods, but research shows this may not be true. To encourage parents and schools to keep trying, we wanted to share some interesting recent research that may smooth the way to changing kids’ eating habits:

1) Elementary Kids: “Healthier Tastes Better”
We assume if we tell kids something is healthy, they’ll say “Yuck” and run in the other direction. Not so, according to researchers at UC Berkeley. They oﬀered kids two identical products (reduced-fat cookies, whole grain crackers, or 100% juice) that were labeled either with a nutrition claim or without. The fourth- and ﬁfth-graders preferred the taste of the “healthier” product – the one with the nutrition claim – widely: 72% for the cookie, 67% for the cracker, and 54% for the juice.

2)  “Branded” Fruits Appeal to Kids
David Just and Brian Wansink, at the Cornell Center for Behavioral Economics in Child Nutrition, found that twice as many kids chose an apple over a cookie when the apples had Elmo stickers on them. Researchers at the University of Missouri-Kansas City backed this ﬁnding up by doing functional MRI scans of kids looking at either food logos or non-food logos. They found that food logos are indeed a powerful motivator. In related news, a California company is now experimenting with edible stickers that could be used to decorate fruits in an attractive way. While we’d like to see healthy food triumph on its own merits, in a brand-saturated world this kind of strategy may help.

3) Fun Names Make Vegetables More Appealing
Wansink, Just and the team at Cornell also found that elementary students were 18% more likely to repeatedly choose hot vegetable dishes when the veggies were given cool names, such as “X-Ray Vision Carrots” instead of boring names like “Vegetable of the Day.” If you’re a good wordsmith, perhaps you can help your local school district with some creative renaming.

4) What Would Batman Eat?
I can never get enough of Brian Wansink’s research. Here’s another good study on what motivates kids’ food choices. Researchers showed a small group of elementary-school-age kids pictures of 6 positive role models and 6 less-admirable role models, and asked, “Would this person order apple fries or French fries?” When asked what positive characters such as Batman or Superman would order, kids chose the apple slices over the French fries 45% of the time. What do kids do without such prompting? McDonalds oﬀered exactly this choice with Happy Meals for seven years, and only 11% of children chose apple slices over French fries. Now the chain splits the diﬀerence, by including both a mini-serving of fries and a little bag of apple slices with kids’ meals.

No matter what the strategies used, changing kids’ eating habits can take time. Some sages are suggesting that total acceptance of school meal changes could take 12 years – which is to say, until today’s ﬁrst graders graduate, never having known other options.  School oﬃcials are rightfully concerned that in the meantime school lunch participation may drop, putting them in a ﬁnancial bind.

But the answer can’t be simply “Just give the kids what they like” – or we would simply serve cookies and ice cream and nothing else. It’s our job as the grown-ups to ﬁnd clever ways to make healthy food appealing. We think the best way lies with making sure that healthy food is delicious. Some schools are holding workshops to teach their staﬀ how to cook whole grains and vegetables in creative ways, while others may be serving mushy, overcooked vegetables that you and I wouldn’t eat either. It’s not enough to serve healthy foods. You have to serve them in high-quality ways.

We encourage everyone who supports good food to support programs like Chefs Move to Schools, that help our schools introduce kids to the best of healthy foods. What can you do to help your local schools make a successful transition to healthier meals?