Best Restaurants in Italy: The Oldways 5

People travel for many reasons, but “learning,” “learning about food,” and “trying new foods and cuisines” remain the most named and most pleasurable aspects of traveling. At Oldways, we couldn’t agree more. In pursuit of our mission to bring the old ways of food to people of all ages and walks of life, we created a culinary travel program. Oldways Culinarias are extraordinary culinary tours, planned with our ﬁrm belief that the heart of any culture can be understood by exploring its food, wine, and culinary traditions. These one-of-a-kind travel experiences embrace culinary and cultural customs, educational sessions, and amazing meals featuring traditional ingredients and foods—from neighborhood trattorias, country inns, and castles, to classic city restaurants.

In this ﬁrst in a series of blogs highlighting ﬁve memorable meals at ﬁve restaurants in a variety of countries, we’re happy to pass along our favorites in Italy. Don’t be surprised if you don’t recognize them from TV travel programs, well-known journalists, or guide books; these aren’t the most famous restaurants, but rather the restaurants that touch their patrons by the food, by the experience, and by the fact that they celebrate the traditions of the place they occupy—thereby making the old ways relevant and current for all to enjoy.

When Oldways ﬁrst traveled to Puglia in 1995, we were taken to Cucina Casareccia (translation: Home Cooking), then owned and run by wife and husband team Concetta Cantoro and Marcello Lagrua. Celebrated for its home cooking and home-like atmosphere, the restaurant featured typical dishes of Puglia: Fave e Cicoria (fava beans and bitter greens) and Ciceri e Tria (fried pasta and chickpeas), among others. Marcello proudly served his homemade spirits.

Lidia Bastianich and Waldy Malouf, two chefs participating in Oldways’ 1995 Culinary Symposium in Lecce, Puglia’s Healthy Traditional Foods and Wines, were so taken with Casareccia, Concetta, and Marcello that they arranged for the two to come to New York City and prepare special Pugliese meals at Lidia’s Felidia restaurant and Waldy’s Hudson River Café.

When we returned to Puglia in 1999 and in 2006, Concetta and Marcello were still cooking and holding court in Lecce, but when we returned in 2013, we found the charismatic Carmela Perrone at the stove and the restaurant renamed Le Zie (the aunt). Carmela is just as talented and passionate a cook as Concetta, and Le Zie retains the same warm and wonderful atmosphere as ever. We happily returned to Via Archimede Costadura for a dinner of Le Zie’s classical dishes during our 2013 Culinaria in Puglia with Ana Sortun. It’s a choice not to be missed if you ﬁnd yourself in the beautiful Baroque city of Lecce in southern Puglia.

Antichi Sapori sits in the shadow of Castel del Monte, the extraordinary Norman castle, now a UNESCO Heritage site north of Bari (the regional capital city of Puglia). However, the food and experience at Antichi Sapori is not overshadowed by anything. The experience is unforgettable: a multi-course meal, ﬁlled with specialties of the region, elegantly prepared with ingredients grown in the chef’s garden.

When we brought a Culinaria group with Chef Ana Sortun to Antichi Sapori in 2013, we had an extra treat. We started the meal in Chef Pietro Ziti’s garden, where he gave us a tour and prepared several dishes for us. Pietro also gave us the opportunity to learn how to make orecchiette, the little ear-shaped pasta that is known as Puglia’s pasta.

Once inside, we couldn’t say no to each and every dish, simply prepared, full of traditional ﬂavors, and all giving credence to the name “Antichi Sapori:” ancient ﬂavors! 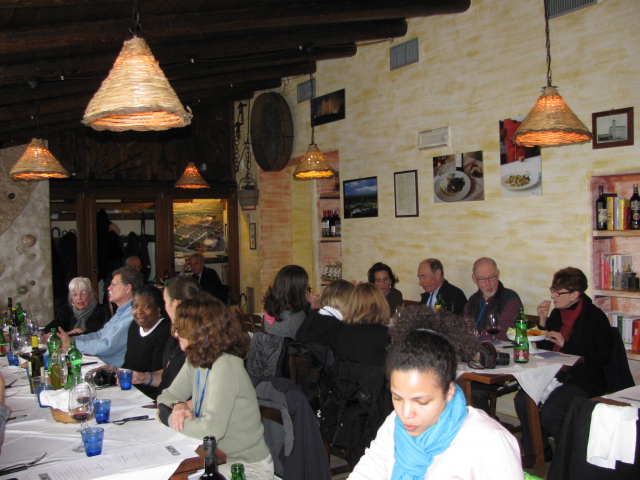 You can’t go to Umbria without visiting Ristorante Umbria in Todi, one of Umbria’s famous hilltop towns. In the late fall and winter, there is a roaring ﬁreplace to sit in front of while enjoying homemade pasta and meats grilled over the ﬁre. During the spring, summer, and early fall, a pièce de résistance of the restaurant is the view from the terrace. No element of this restaurant is to be missed—especially its traditional Umbrian specialties: pasta, truﬄes, soups, vegetables, and meats.

The spectacular view from the terrace at Ristorante Umbria.

There are plenty of wonderful restaurants in Florence (the capital city of Tuscany), and many ways to research Florentine restaurants. However, Oldways’ special place in Tuscany is in the hills of Chianti: Badia a Coltibuono.

Badia a Coltibuono, which means “abbey of the good harvest,” is much more than a restaurant. It is a 1000-year-old estate featuring a cooking school, a restaurant, an incredible garden, and a vineyard—not to mention olive oil and specialty food production run by the family of Italian food expert and cookbook author, Lorenza di Medici.

Oldways’ roots have a connection to Badia a Coltibuono. When Dun Giﬀord made a journey to Northern Italy in 1988, which was in part inspiration for the founding of Oldways, Badia a Coltibuono was a stop that made an impression on him. As Dun wrote in the preface to our book, The Oldways Table, “We agreed we had eaten like the Medicis, and loved every traditional mouthful.” When he got back to Boston from this extraordinary Italian pilgrimage, he called his lawyer and set the paperwork in motion to establish Oldways as a nonproﬁt educational organization.

Badia a Coltibuono serves traditional Tuscan cuisine, created from local and often organic ingredients, and prepared with a modern twist. The view is as special as the food—looking out at the gardens and the hills of Chianti. We’ve hosted several meals there during Culinarias and during a Continuing Medical Education program we co-organized with the Harvard School of Public Health in 2004. Each of them have been memorable, both for the food and the setting.

And if you truly want to experience Badia a Coltibuono, there are eight spectacular rooms available for overnight stays. A true de Medici experience!

When planning the Oldways Culinaria to Liguria in March 2017 (our third time there!), one of our ﬁrst calls was to Sergio Circella of La Brinca Restaurant, high up in the mountains above Portoﬁno. Known as the Italian Riviera, Liguria is a region of both the sea and the mountains, as the mountains quickly rise inland from the sea. It’s also a region famous for pesto.

La Brinca is in the tiny mountain town of Ne. The ﬁrst time we at Oldways dined at La Brinca was on a raw and rainy winter evening, and we weren’t sure we would return from the scary, nerve-wracking drive. Even if it had been our last meal (it wasn’t, don’t worry!), it would have been worth it—and all of the many meals we’ve had at La Brinca have been equally wonderful: antipasti of the season and region, little lasagne with pesto, ravioli with local herbs and a meat or walnut sauce, rabbit stuﬀed with herbs, dessert, and local wines.

Best of all, Sergio, and in later years, his son, have started our time at La Brinca with a cooking demonstration. Love, learning, and passion are in abundance. Also, Sergio never forgets. When Oldways returned to La Brinca after several years, we found our letter of thanks proudly displayed.

The Best of the Best: Italian Home Cooking!

These restaurants are our favorites in Italy, but we couldn’t forget to mention our #1 Italian food recommendation: Home cooking. If you’re lucky enough to be invited to dine at someone’s home in Italy—say yes as quickly as you can.

And for more of the best cuisine that Europe has to oﬀer, join Oldways on our next culinary adventure!