Sunday Lunch in Madrid - “It’s normal! You can do it too!"

One of (many) great things about working at Oldways is the pleasure of having friends who live in places we’ve worked -- all around the world -- particularly in the Mediterranean, and especially in Italy and Spain.  During my last trip in May, after a long week of 12+ hour business days in Milan, Parma and Rome, I flew to Madrid for some R&R with Fausto and Mar Luchetti. 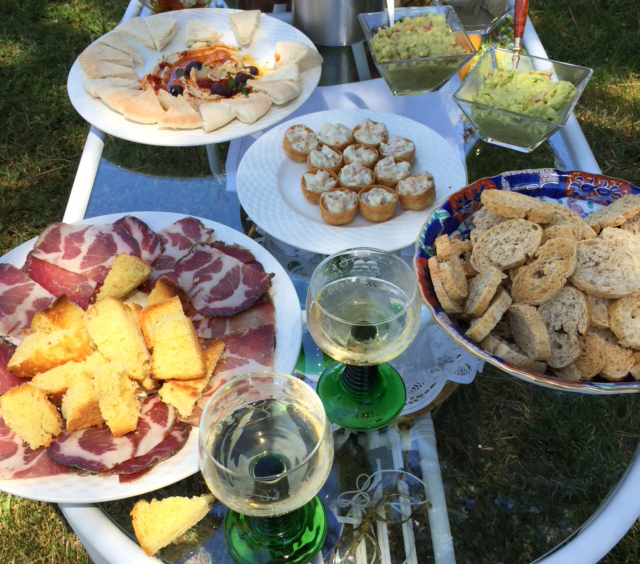 One of (many) great things about working at Oldways is the pleasure of having friends who live in places we’ve worked — all around the world — particularly in the Mediterranean, and especially in Italy and Spain.  During my last trip in May, after a long week of 12+ hour business days in Milan, Parma and Rome, I ﬂew to Madrid for some R&R with Fausto and Mar Luchetti.

Fausto and Mar are well known by many people in the food world.  At Oldways, we worked closely for many years with Fausto when he was Executive Director of the International Olive Oil Council, as we introduced olive oil and the Mediterranean Diet to Americans in the 1990s.  Luckily for us, Fausto and Mar also became close friends.

I’m struck by the same thing whenever I spend time with them.  Their meals are unbelievably delicious, and the preparations appear eﬀortless.  Eﬀortless!  This thought is at the core of Oldways messaging:  that healthy eating is very tasty and is approachable – it’s not rocket science.  Or, in Fausto’s words, “The lunch we had is a normal Mediterranean lunch, the one and only one we have at home.”

Here’s what we had:  Spanish tapas (small bites), Pasta with Tomatoes and Tuna, Fruit in Parchment, along with wine from Spain and Italy.  Plus, espresso and biscotti, and if game, grappa or mandarello (a liqueur made from mandarine oranges).

And here’s how you can do this too!

Tapas:  Assemble a selection of appetizers on small plates, and choose a sparkling, white or rosé wine.  Fausto made hummus and guacamole, served with jamon Serrano (Spanish dry-cured ham), cheese and bread.  You can add olives, vegetables.  There are no rules.  Take a few minutes to make everything look pretty – it pays oﬀ – your guests will feel very welcome, like they do at Fausto and Mar’s.

Fausto and Mar spend their summers on the island of Pantelleria, a small volcanic island between Sicily and Tunisia, and Fausto often chooses to cook a Sicilian-inspired pasta dish.  The tomato and tuna pasta sauce starts oﬀ with garlic and onion and olive oil; Fausto then adds cherry tomatoes, tuna, tomato sauce, and spices, including dried fennel.  For a condiment (a special added ﬂavoring), he toasts bread crumbs and adds chiles to make it spicy.  For the pasta nothing would do but a speciﬁc Sicilian pasta shape – busiata Trapanese — that he bought in Italy and brought to Madrid.  He cooked the pasta al dente, added the pasta to the sauce, and brought it to the table in the pan!

For dessert, Mar made Fruit in Parchment.  I’ve never seen anything like this; although I’ve had ﬁsh or chicken cooked in parchment, the idea of cooking fruit in parchment is new to me.  Make it part of your repertoire – it’s simple, it’s delicious, it’s healthy and it’s beautiful!  Mar used mangoes, peaches, pomegranate seeds, melon, plus sticks of cinnamon and vanilla, and a touch of wine.  Try this recipe ﬁrst (see below), and then experiment – let your mind be bold! 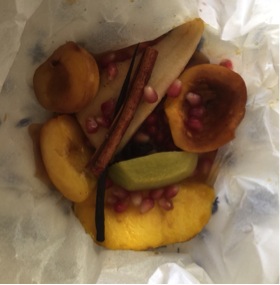 Parchment Baked Fruit
Oldways enjoyed this recipe on a recent trip to Spain. Our version included apricot, pears, pomegranate, and cinnamon, but feel free to use any fruit that you wish! Dried fruit (like cranberries or apricots), also makes a wonderful addition!