Raw-Milk Cheese, A Reputation for Excellence

The first ever Raw-Milk Cheese Appreciation Day has come and gone, and what a terrific event it was! Celebrated recently across the world, the event galvanized support for the delicious tradition of raw-milk cheese—made as it has been to the highest standards of quality for centuries. Retailers sampled raw-milk cheese, invited local producers demo, and offered special discounts. Producers hosted creamery tours and special classes. Restaurants offered raw-milk cheese plates and prepared special menu items. Loud and proud, everyone shared their love for fromage au lait cru.
Dairy 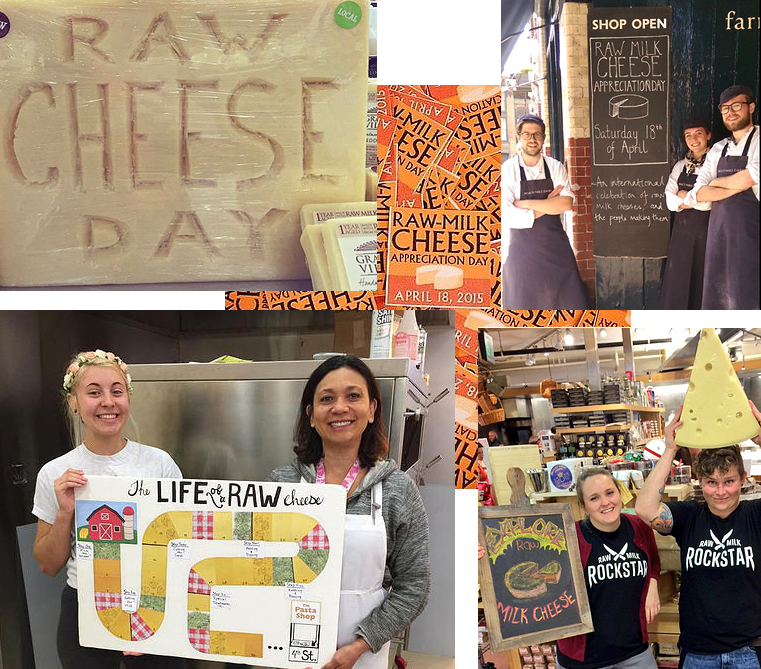 The ﬁrst ever Raw-Milk Cheese Appreciation Day has come and gone, and what a terriﬁc event it was! Celebrated recently across the world, the event galvanized support for the delicious tradition of raw-milk cheese—made as it has been to the highest standards of quality for centuries.

For a quick recap, the international celebration occurred in more than 15 countries on 4 continents. Over 150 companies formally participated and special events occurred in roughly 500 retail stores. There were more than 20 articles and blogs drafted speciﬁcally to celebrate the event—by professional food writers and cheese community bloggers alike—that highlighted the importance of raw-milk cheese, provided background on its history of production and regulation, and shared great tips for putting together the perfect raw-milk cheese plate.  We at the CCC also had the great opportunity to spread the good word on several radio shows, notably with the ﬁne folks at The Skinny Beet and Cutting the Curd.

When asked why Raw-Milk Cheese is so important, I generally emphasize three things. Taste, Tradition, and Choice.

There is also more than 1,000 years of history behind raw-milk cheese making. Since time immemorial cheese has been made with pure, raw-milk. In fact, before 1930 almost no cheese was pasteurized. It wasn’t even called raw-milk cheese, it was just cheese. Many of the most classic, most famous cheeses in the world are actually required to be made with raw milk to earn their PDO status— Comte, Le Gruyere, Parmigiano-Reggiano, and Roquefort, to name a few. There’s a reason they’re required to be made with raw-milk and it’s about ensuring quality and protecting tradition.

At the end of the day, the right to raw-milk cheese is also about protecting choice. It’s about having the option to choose your cheese of choice—whether those of us who understand and believe in the importance and deliciousness of raw-milk cheese will have the opportunity to continue to make them and the opportunity to continue to eat them, without having to ﬂy to France.

But one of my favorite answers to question of “why do you support raw-milk cheese” came at a distributor-sponsored event at Night Shift Brewery in greater Boston. Some sixty of us, mongers and makers, had gathered to revel in raw-milk cheese; both imported classics and those made by locally. While going around and volunteering our own respective answers, a young cheesemaker at Cricket Creek Farm in western MA told us deﬁnitively why she thought raw-milk cheese was so important.

I say has to, but should really say gets to. For this young cheesemaker, working with raw-milk is not so much a challenge as it is an opportunity. She doesn’t produce raw-milk cheese despite the fact that it is diﬃcult, she produces it because it is diﬃcult. Raw-milk cheese is a vehicle for her to do “the most creative thing that she has ever done”—to express herself and her healthy cattle and her cared-for land and her vibrant agricultural economy in the form of delicious and nutritious cheese. Excellence in cheesemaking translates into excellence in cheese and it makes the exhaustive endeavor of raw-milk cheese production well worth undertaking. You simply cannot cut corners and still make exceptional raw-milk cheese. That fact pushes some producers towards pasteurization but for others, like our champion of raw-milk cheese at Cricket Creek, it attracts them to a uniquely delicious labor of love.

Raw-Milk Cheese Appreciation Day has come and gone, but it will assuredly return with even greater energy again next year. Stay on the lookout for updates. In the meantime, one does not need an excuse to celebrate the tradition of raw-milk cheese. A reputation for delicious and nutritious excellence is as good an excuse as any.