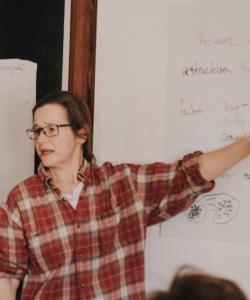 Jennifer Kast has been involved in the specialist food industry for over 30 years. Her ﬁrst taste of small batch artisan food production was in northern Michigan, working summers as a teenager for American Spoon Foods. There she learned the importance of integrity: integrity of ingredient, production process, and sales. That lesson has stuck with her throughout her career in food. Her early career was spent at Zingerman’s Delicatessen in Michigan and Neal’s Yard Dairy in London. After this, she embarked in graduate studies in European Agriculture and Politics. Having spent 10 years working for the British Civil Service in an entirely unrelated policy ﬁeld, she went back to artisan food production, working as a cheesemaker for 8 years in the ﬁrst of the new wave of urban micro-dairies, London’s Kappacasein. From there she set up the cheese/milk educational group MilkJamLondon, and began teaching cheesemaking classes for Neal’s Yard Dairy. She currently works for Neal’s Yard Dairy coordinating the retail strategy and cheesemaking educational programs.

Jennifer has a bachelors degree in German Literature from the University of Michigan, a masters degree in European Politics from Georgetown University, and 3 years of post-graduate study in International Relations at the London School of Economics.