5 Ways (Beyond Breakfast) to Eat Yogurt on the Mediterranean Diet 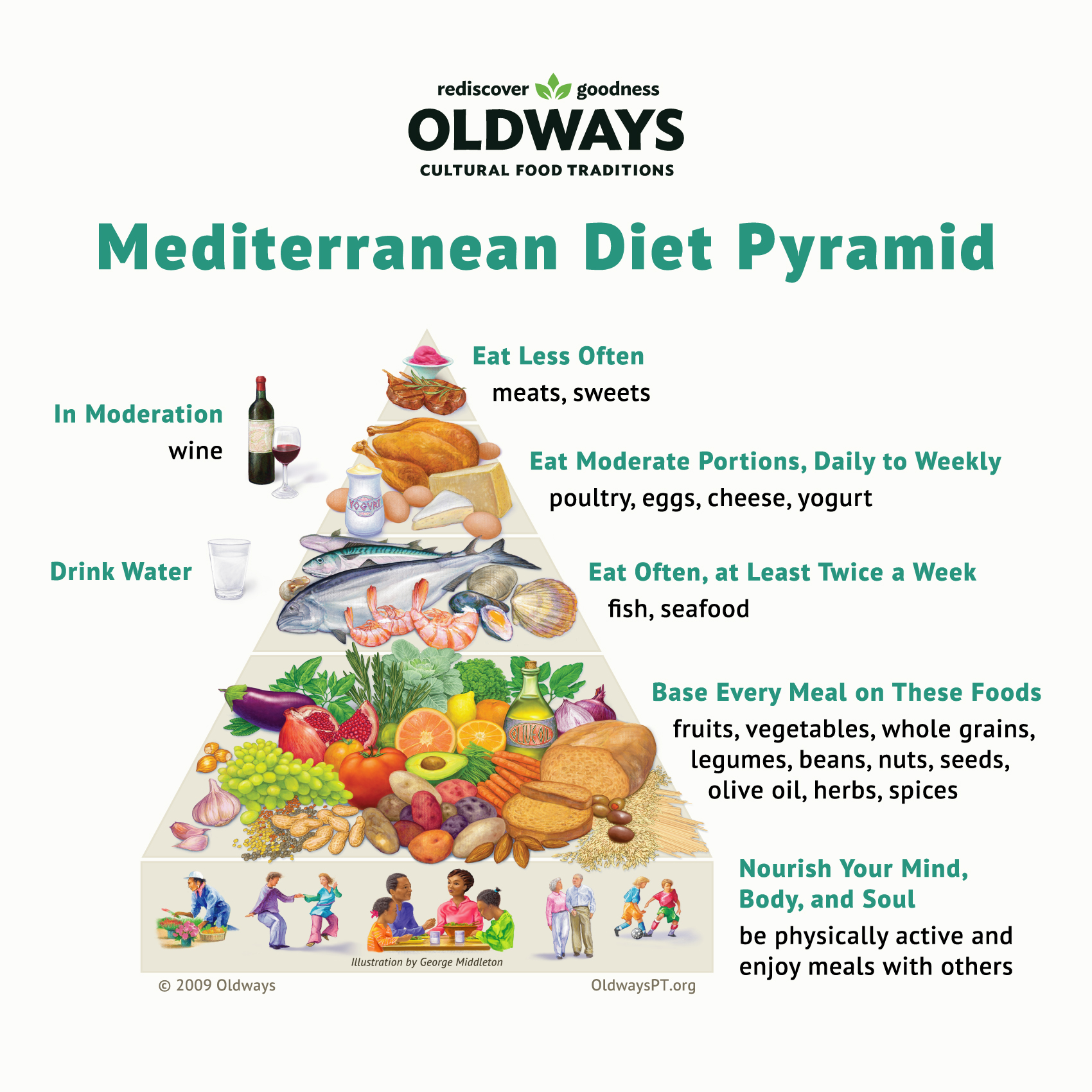 But in the Mediterranean, yogurt is enjoyed at breakfast, lunch, and dinner, in a variety of interesting, sweet and savory ways. Often, it’s a Greek-style yogurt. Greek yogurt—which is not only Greek—is yogurt that has been strained, eliminating some of the liquid (whey) to create a creamier, thicker style of yogurt.

Yogurt is milk that has been fermented with live starter cultures, and it is “an essential part” of the Mediterranean Diet, writes Claudia Roden in A Book of Middle Eastern Food. In many cultures, it was even believed to have medicinal and therapeutic properties. Longevity and a strong constitution were sometimes attributed to eating yogurt.

Today’s ﬁndings suggest our ancestors were onto something: research shows that the live cultures in yogurt may contribute to a healthy gut, which in turn aids digestive health, the immune system, and more. Not to mention, yogurt is a source of protein, vitamin D, and calcium. 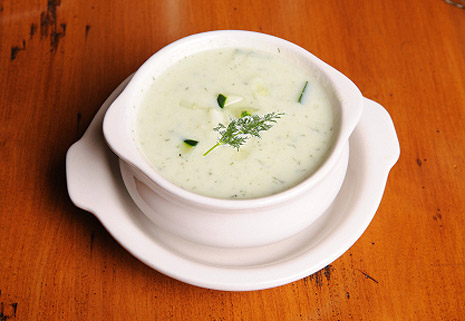 Make a hot or cold soup

Throughout the Eastern Mediterranean, you’ll ﬁnd variations of yogurt soup—hot or cold—in Armenian, Lebanese, Turkish, and Greek cultures. Ultra-comforting, it’s often served as a remedy when someone feels under the weather, much like chicken soup in the United States.

Most yogurt soups start with a creamy, Greek-style yogurt, and a grain like rice, bulgur, or pasta. Want to try it out yourself? In Chef Ana Sortun’s wonderful book Spice: Flavors of the Eastern Mediterranean, you’ll ﬁnd a recipe for Yogurt Soup with Toasted Pasta and Dried Mint, a delicious variation on this classic comfort food.

In Greece, trahana, a fermented mixture of yogurt and bulgur wheat, is used to thicken stews and soups; in Lebanon, you’ll ﬁnd a similar mixture of fermented wheat and yogurt called kishk.

Serve as a dip or dressing

“In most countries, it is customary to place a bowl of fresh yogurt on the table” with the meal, writes Claudia Roden. 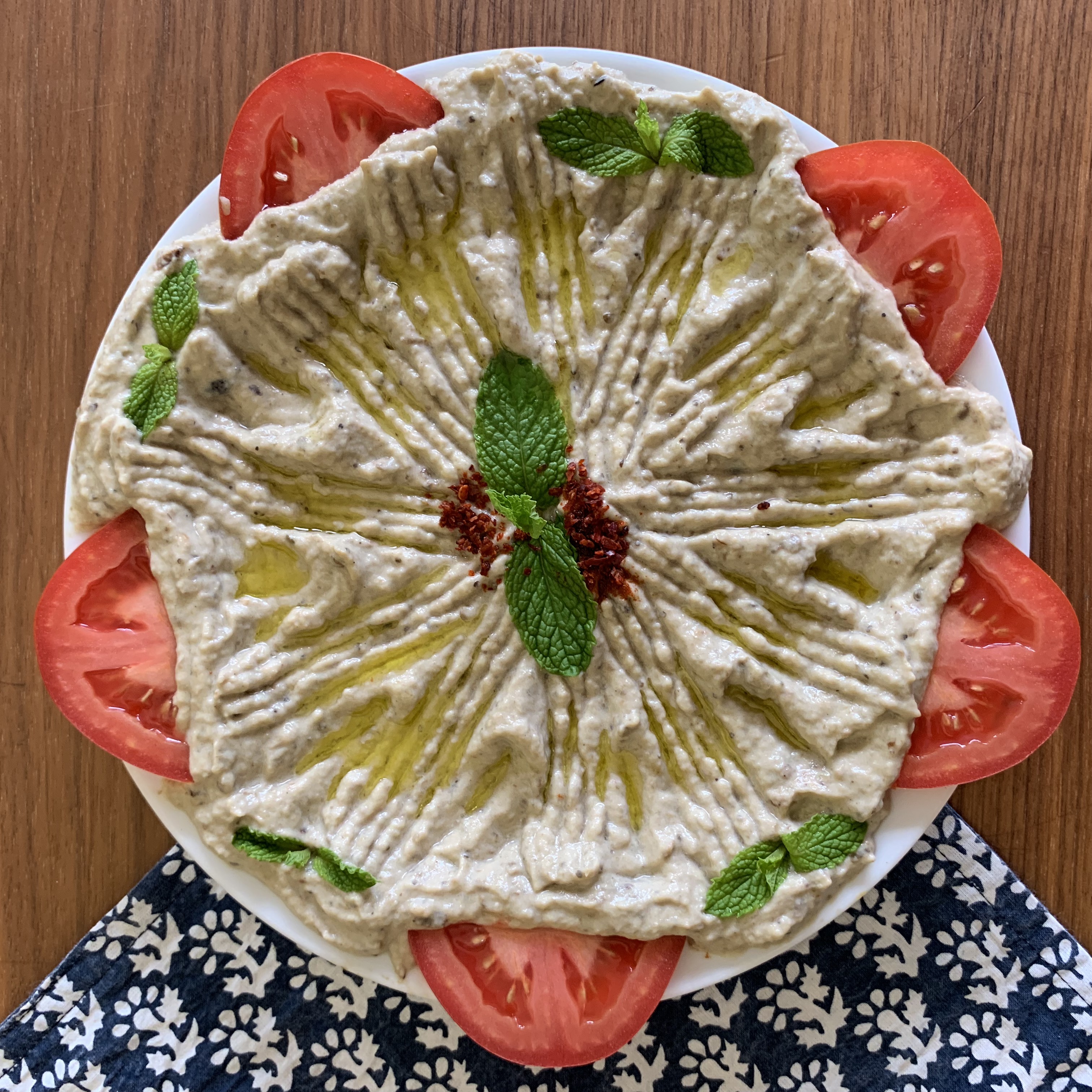 Indeed, you’ll ﬁnd yogurt as an accompaniment to many dishes in the Mediterranean, served alongside bread, salads, grilled and roasted meats, vegetables, and rice. Often, it will be ﬂavored with lemon juice, garlic, or dried mint.

Labneh is a type of thick, tangy strained yogurt enjoyed throughout the Eastern Mediterranean. You may see it as part of a Lebanese mezze (small plates) spread, alongside ﬂatbread for dipping. Labneh may be enlivened with a drizzle of extra-virgin olive oil, lemon, or herbs such as za’atar and sumac.

Yogurt-and-vegetable-based dips also appear throughout the Mediterranean. Many of us are familiar with tzatziki, the Greek dip of yogurt, cucumbers, and dill. Its Turkish cousin, cacik, is a mixture of fresh herbs, greens, and yogurt. Chef Ana Sortun calls this dip “everything green!” In Syria, yogurt is mixed with grilled eggplant, tahini, and paprika to make mutabal, a deliciously smokey dip for crudite or pita bread.

What makes yogurt such a great marinade? When you’re grilling, the acids in yogurt will slowly tenderize the meat, creating a tender, almost falling-apart texture. As Bon Appetit’s Alex Delany writes: “Marinating meat in yogurt will change your life.”

In addition to contributing to texture, the acids in yogurt will caramelize upon hitting the heat of the stove or grill. “It inﬁltrates the meat and builds this beautiful crust,” explained Anissa Helou, a cookbook author specializing in the cuisines of the Mediterranean, North Africa, and Middle East. 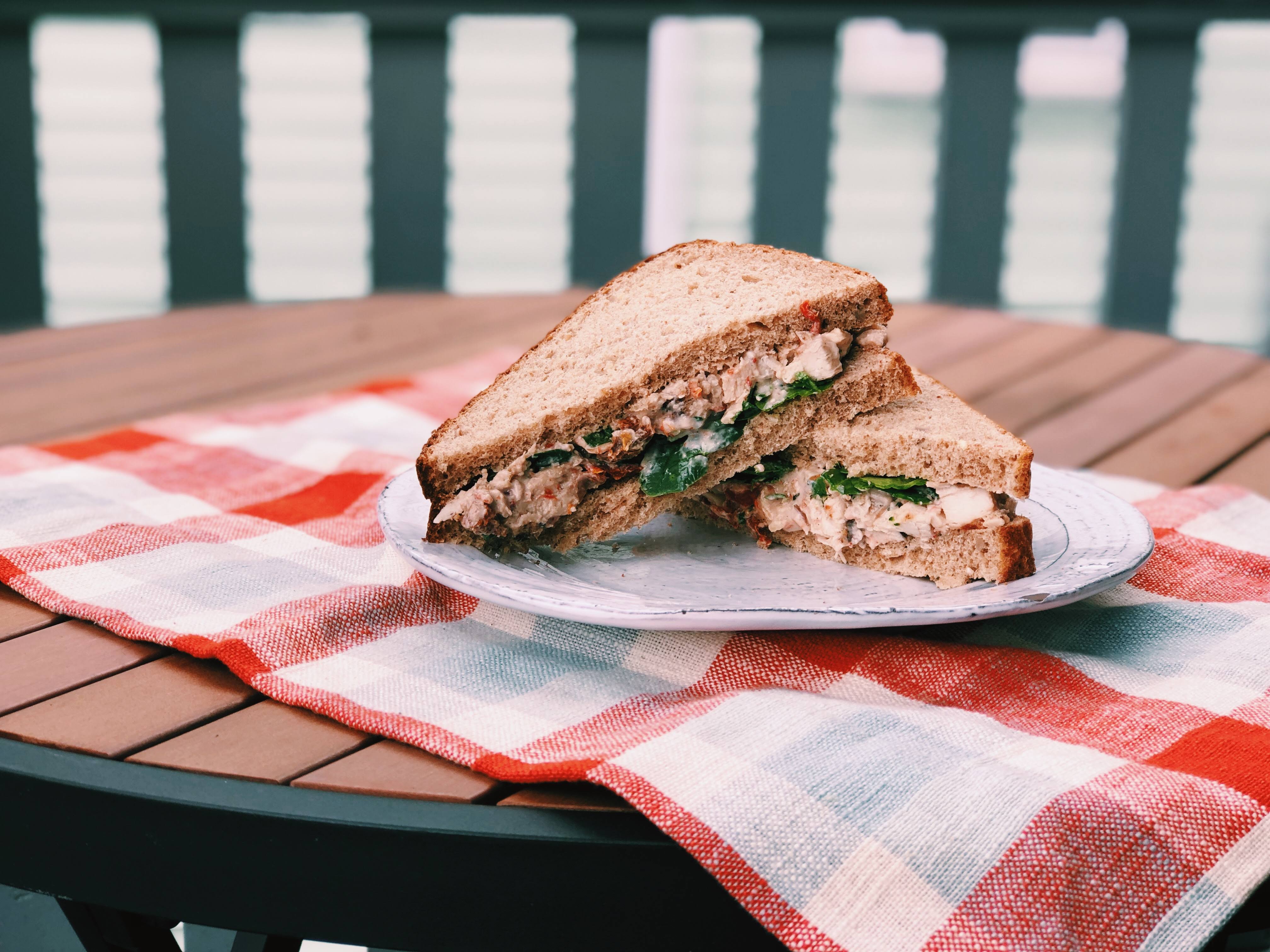 Next time you’re grilling chicken or lamb for a special occasion, try marinating it ﬁrst in a mixture of plain Greek yogurt and a little lemon juice. Cover, refrigerate, and let rest for up to 12 hours before you ﬁre up the grill. Serve it with plenty of delicious, grilled vegetables, too!

Did you know Greek yogurt is an excellent substitute for mayonnaise? Swapping out mayonnaise for yogurt in your favorite dishes cuts back on saturated fat, but also adds a little tanginess and freshness.

For example, these Mediterranean Chicken Salad Sandwiches give chicken salad a delicious and nutritious Mediterranean makeover, using Greek yogurt as the binder, and fragrant sundried tomatoes and roasted red peppers for ﬂavor.

Enjoy desserts and drinks made with yogurt

Yogurt stars in many of our favorite light but creamy, delicious Mediterranean desserts.

In French households, Gateau au Yaourt, Yogurt Cake, is one of the ﬁrst recipes children learn to bake by themselves. That’s likely because it’s extraordinarily simple! Children use a small, individual cup of unﬂavored yogurt as the base, and then use that same container to pour out the ﬂour and sugar—no weighing or measuring required. 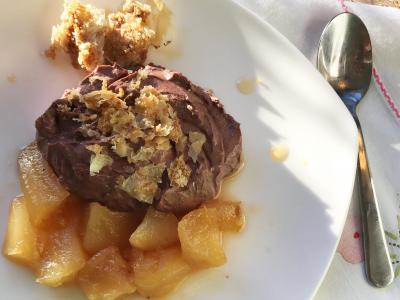 This Sultana Yogurt Cake, borrowing inspiration from the Middle East, uses two full cups of Greek yogurt, and just a little ﬂour to bind, creating an elegant dessert with a texture quite like cheesecake. We love to top it with fresh fruit, like cherries.

In Egypt, you’ll ﬁnd basbousa, a spongy semolina and yogurt cake, soaked in a syrup ﬂavored with rosewater, orange ﬂower water, or lemon. It’s often cut into a diamond shape and topped with an almond for garnish.

On an Oldways culinary tour to Greece, we learned how to make this Milk Chocolate Yogurt with Crispy Almond Phyllo, a perfect special treat for the holidays.  The ﬂavors are rich, but the dessert is light, with classic Greek ingredients like phyllo dough, honey, and ouzo.

Yogurt is also included in Mediterranean beverages. During Oldways’ culinary tour to Cyprus in 2019, many travelers enjoyed ayran, a refreshing yogurt-based drink with a dash of dried mint and salt. It’s perfect for hot days, or to accompany savory or spicy meals. Not just a Cypriot or Turkish drink, ayran is popular throughout the Eastern Mediterranean and Western Asia. 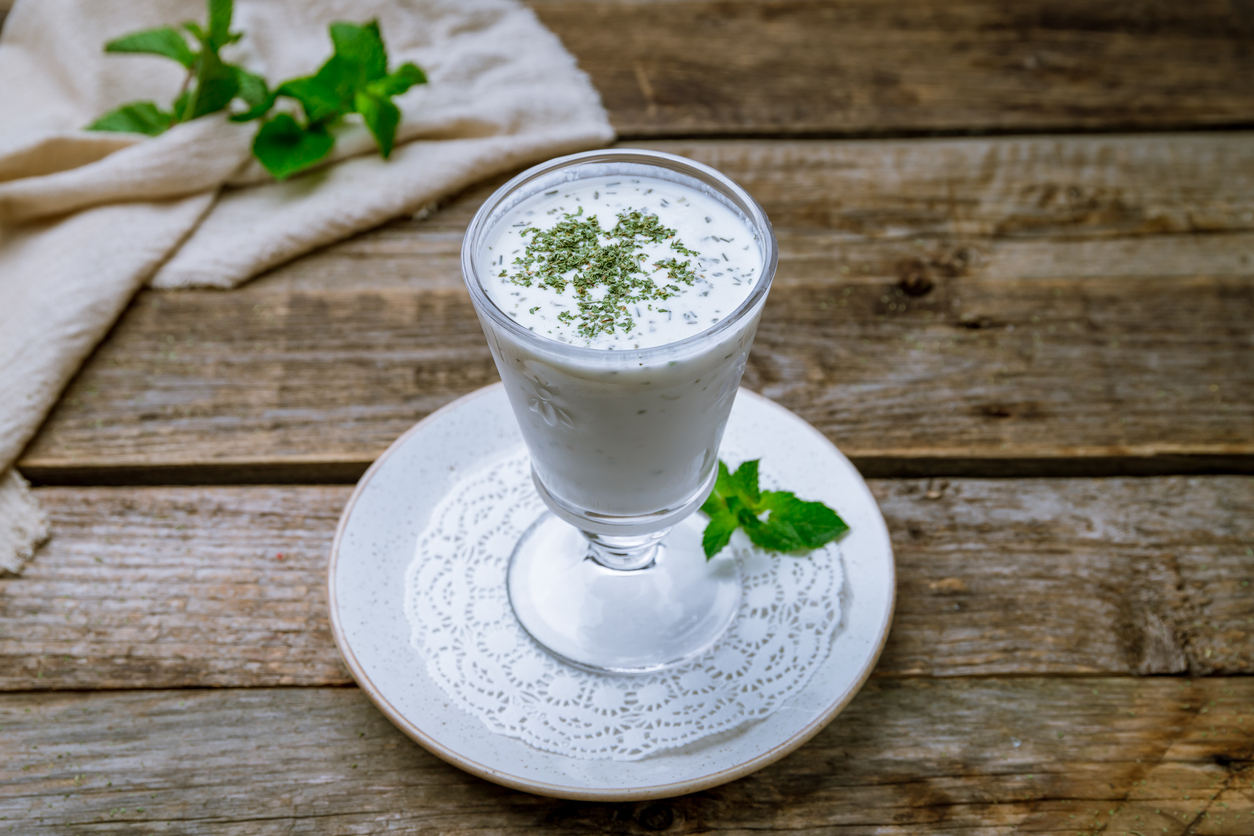 We’ll never turn down a breakfast bowl of yogurt, fruit, and nuts, but we hope this list has inspired you to incorporate yogurt into your cooking throughout the day: breakfast, lunch, dinner, and dessert! For more inspiration, check out the recipes below:

Eggplant Dip with Yogurt and Za’atar

Badria Bedri
Loved the article about yogurt and I hope you don't mind I took some of the info and posted it in my FB> Love your FB page and website.
Katherine-Oldways
Hi there! We're so glad you enjoyed this article. We'd be happy for you to share it with your followers—please be sure to include the link back to this original post, and rephrase the concepts into your own words within the post. Thank you!
Bernie
Does yogurt have to be Greek yogurt, or is plain skim milk yogurt also a good choice for the Mediterranean Diet?
Katherine-Oldways
Hi Bernie! We love Greek Yogurt, but other yogurts fit in as well! Check out our Mediterranean diet pyramid at OldwaysPT.org/Mediterranean for suggestions on dairy intake.