Like many trendy dishes today, grain bowls have a rich history in numerous global cuisines, including the Mediterranean Diet. Many grains trace their roots back to the Fertile Crescent, an area on the eastern side of the Mediterranean Sea including what is today Egypt, Turkey, Lebanon, and Israel. Until the late 1800’s, when industrial milling made it cheap and easy to remove the nutritious bran and germ of the grain, grains were nearly always eaten in their whole grain form.

Even as the 20th century ushered in newer convenience foods and reﬁned grain products, many Mediterranean cultures carried forward their whole grain habits. Some examples include traditional barley rusks in Greece or bulgur wheat in Turkey and Cyprus. In fact, high consumption of whole grains is one of the food habits characteristic of the Blue Zones (like Sardinia, Italy and Ikaria, Greece), places around the world where people live the longest. Best of all, Mediterranean grain bowls are downright delicious, as they serve as the perfect vehicle for fresh herbs, seasonal vegetables, ﬂavorful cheeses, and of course a generous drizzle of extra virgin olive oil.

Tabbouleh salad is a grain bowl that exempliﬁes Mediterranean resourcefulness. Once you become acquainted with this Lebanese salad of ﬁnely chopped parsley, tomatoes, bulgur wheat, lemon juice, and olive oil, you have no reason to ever let herbs wilt in your crisper drawer again. Bulgur, the feature grain of tabbouleh salad, is a term for wheat kernels that have been pre-boiled and then ground into smaller pieces. Because bulgur has been precooked and dried, it needs to be boiled for only about 10 minutes to be ready to eat—about the same time as dry pasta. 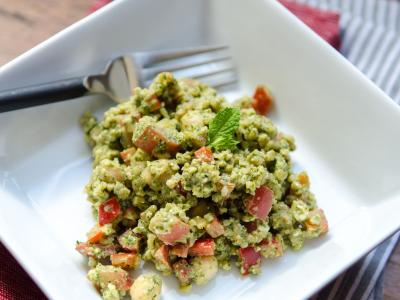 If you favor the spiced and smoky ﬂavors of Egyptian and Eastern Mediterranean cuisine, then you just might be a freekeh fan. Freekeh is a hard wheat (often durum wheat) that is harvested when the plant is still young and green, then roasted and rubbed. This unique process gives freekeh its signature smoky ﬂavor. Rumor has it that freekeh was discovered when an ancient village in the Eastern Mediterranean hurriedly picked young wheat before an attack on their city. Fire from the attack burnt the young wheat, but the people found that not only was this roasted young wheat ﬁt to eat, it could be quite delicious. Similar to bulgur wheat, freekeh is often sold cracked into smaller, quicker-cooking pieces. Some of our favorite uses for freekeh include in a salad with black lentils, roasted cauliﬂower, and dried cherries; in a tabbouleh-inspired lemon mint salad, or in a grain bowl with roasted brussels sprouts, cranberries, and pomegranate.

Italian risotto is one of our favorite Mediterranean grain bowls. Though made with white arborio rice in many restaurants, we enjoy the nuttiness that short grain brown rice brings to the dish. An insider shortcut: to help coax brown rice into a rich, creamy risotto, it helps to give the brown rice a quick boil before starting the risotto process. Risottos can be dressed up with all sorts of toppings, including seafood (such as scallops), mushrooms, or spring peas.

Polenta is made from coarsely ground dried yellow corn (not to be confused with Southern “grits,” which are made from white corn) which are boiled and then simmered into a delightful porridge. Be sure to look for whole grain corn, rather than degermed or reﬁned corn, for the sweetest, corniest porridge. This Northern Italian dish can be served with any number of sauces or toppings, such as pesto, cubed butternut squash, a hearty pork ragout sauce, or even a ﬁllet of roasted sea bass. Cooked polenta thickens up when it cools, and can then be cut into strips or shapes and baked or pan fried.

Barley was one of the ﬁrst domesticated grain crops in the world, and played a vital role in traditional Mediterranean cuisine. In fact, rumor has it that Roman gladiators were called hordearii, or “barley-men.” Today, barley is wonderful in grain salads as it has a pleasant chew, and is also sometimes used in risotto-style dishes (aﬀectionally dubbed “barlotto” by some chefs). Although all whole grains have more ﬁber than their reﬁned counterparts, barley is particularly special as it contains some of the highest levels of beta-glucans, a special type of soluble ﬁber that can help lower cholesterol. 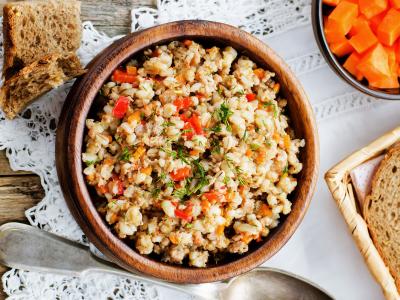 With all of these grain bowls at the ready, it is no surprise that the Mediterranean Diet can help improve longevity and reduce the risk of heart disease. September is Whole Grains Month, meaning it is the perfect time to get creative and whip up your own Mediterranean grain bowls. Most Mediterranean grain bowls are comprised of a few key elements: a whole grain (such as freekeh, bulgur, or barley), a vegetable (like roasted eggplant or shredded zucchini), a dressing (as simple as olive oil or as creative as a spiced tahini dressing), and a ﬁnishing touch (like fresh herbs or Parmigiano-Reggiano). Pair with a protein source (like grilled salmon or spiced chickpeas) and you have beautifully balanced dish!

Food Tech Notes
Now Mediterranean diet is widely accepted as healthy diet and is practiced by many people throughout the globe.
Terri C
Always learning