Spring has arrived! Welcome the warm weather by enjoying a meal around the table with your family and friends. 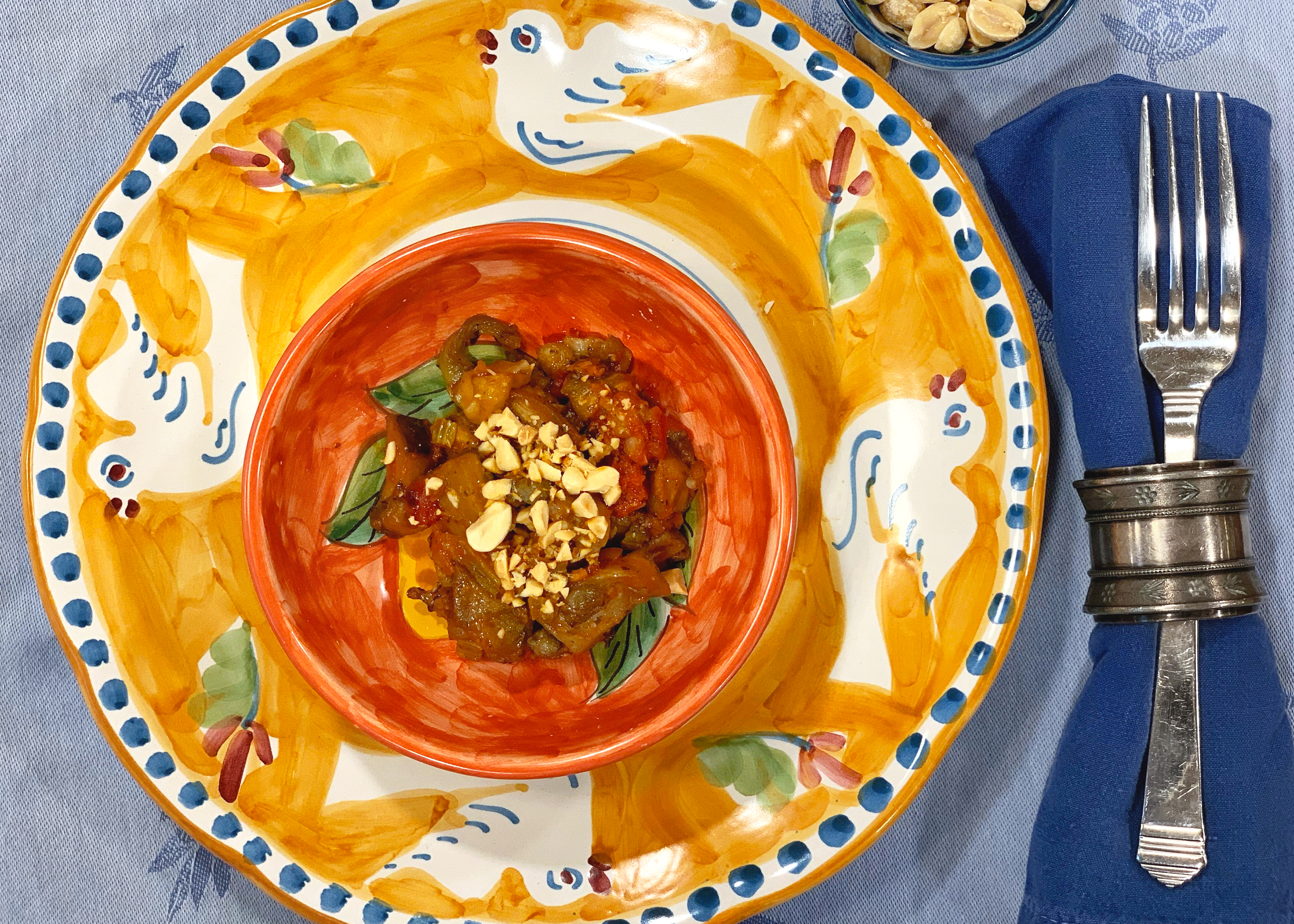 The table has always played a role here at Oldways: It has been a place for us to gather and solve food issues, learn about new cultures, and enjoy new cuisines from around the world. This is why we have consistently encouraged the “pleasures of the table” as a key component of healthy eating. Based on our extensive knowledge of the “old ways” of eating, and on abundant scientiﬁc evidence, we have long argued that eating slowly, in a relaxed setting, in the company of friends and/or family, promotes better health. This is why, at the base of the Mediterranean Diet Pyramid, you’ll ﬁnd people enjoying meals with each other depicted among other elements of a healthy lifestyle, such as joyful movement and walking.

In anticipation of Mediterranean Month in May, we have planned the menu for your next dinner party. Hope you’re hungry! 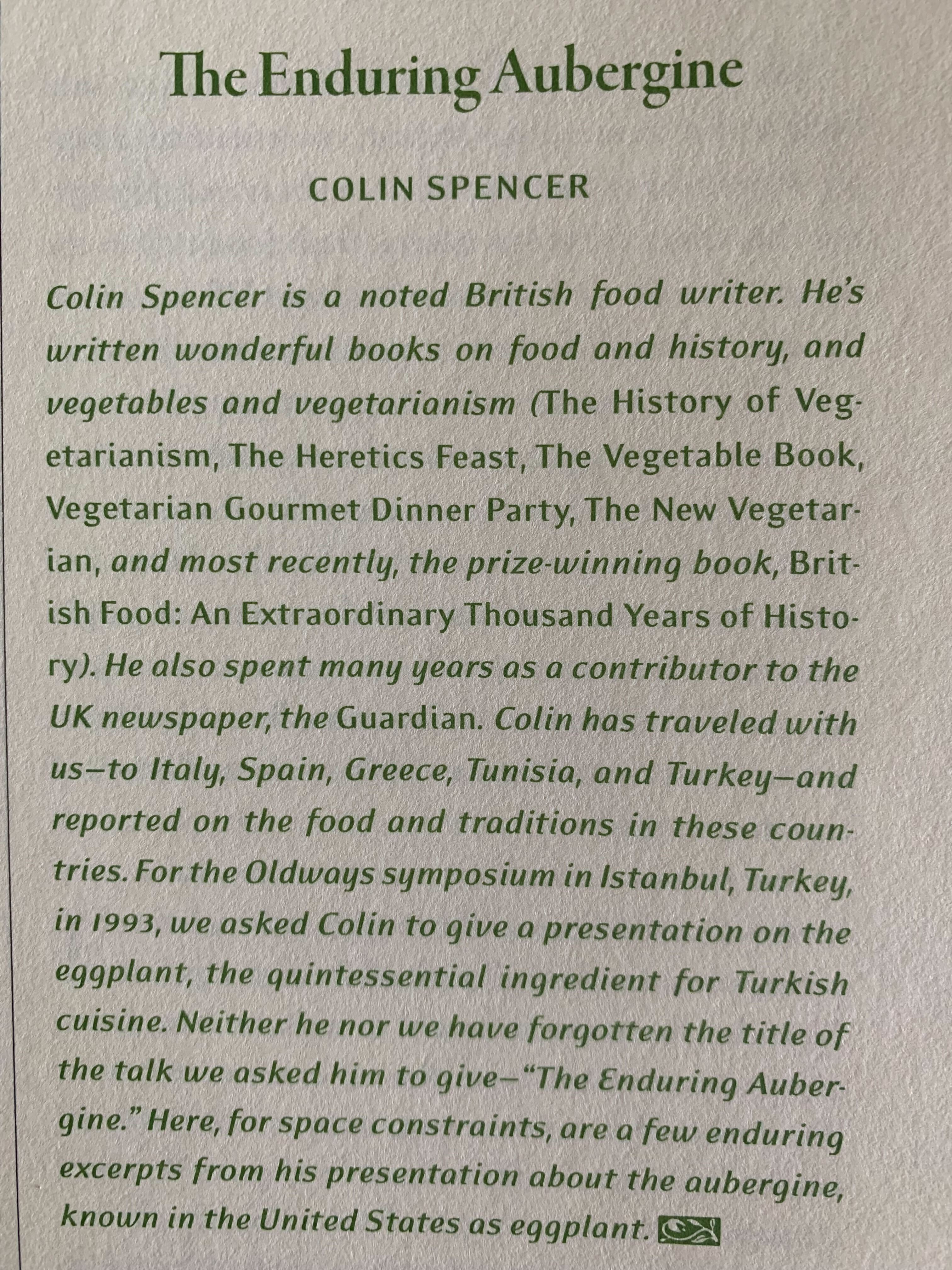 To start, we’re recommending Sicilian Warm Caponata with Toasted Peanuts —Caponata is basically an eggplant stew or relish. It is very versatile and can be enjoyed as a main dish, a side dish, or as a topping to toasty bread.

Eggplant is an important vegetable in the Eastern Mediterranean. There’s an essay reprinted in The Oldways Table called The Enduring Aubergine by a wonderful English food writer friend of ours named Colin Spencer. In it, he gives a nod to aubergine, or eggplant saying, “Surely no other vegetable except for garlic appears so often as part of folklore. The Arabs took the aubergine to all the Mediterranean countries they conquered, but this delicious and ﬂexible vegetable had to wait another thousand years to meet its one true love, its soul mate and most natural partner – the tomato.” 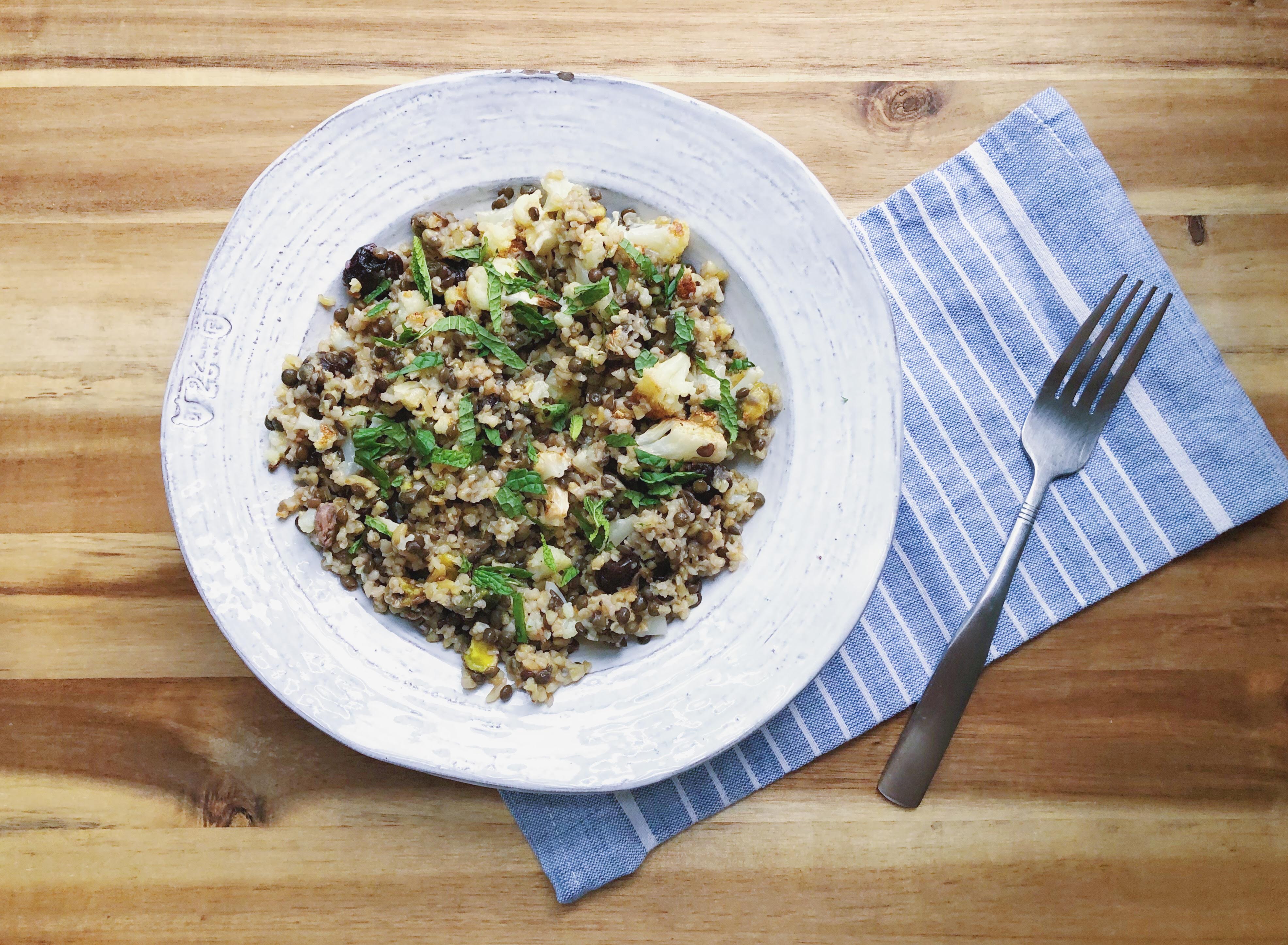 Caponata is one dish where the aubergine and tomato meet for a happy romance. It’s also a wonderful combination of quite a few southern Mediterranean foods, including capers, onions, olives, almonds, and vinegar. You can serve it based on your preference, but we recommend warm or room temperature.

Next, we have Freekeh and Black Lentil Salad with Roasted Cauliﬂower and Dried Cherries

Rumor has it that freekeh was discovered when an ancient village in the Eastern Mediterranean hurriedly picked young wheat before an attack on their city. Fire from the attack burnt the young wheat, and the result was quite delicious. Freekeh’s smoky ﬂavor pairs beautifully with savory roasted cauliﬂower and sweet-tart dried cherries. This plant-based recipe tastes good warm, chilled, or room-temperature making it great for a multi-course dinner party. It is also a potluck-friendly option if your guests want to bring dishes to the dinner party! 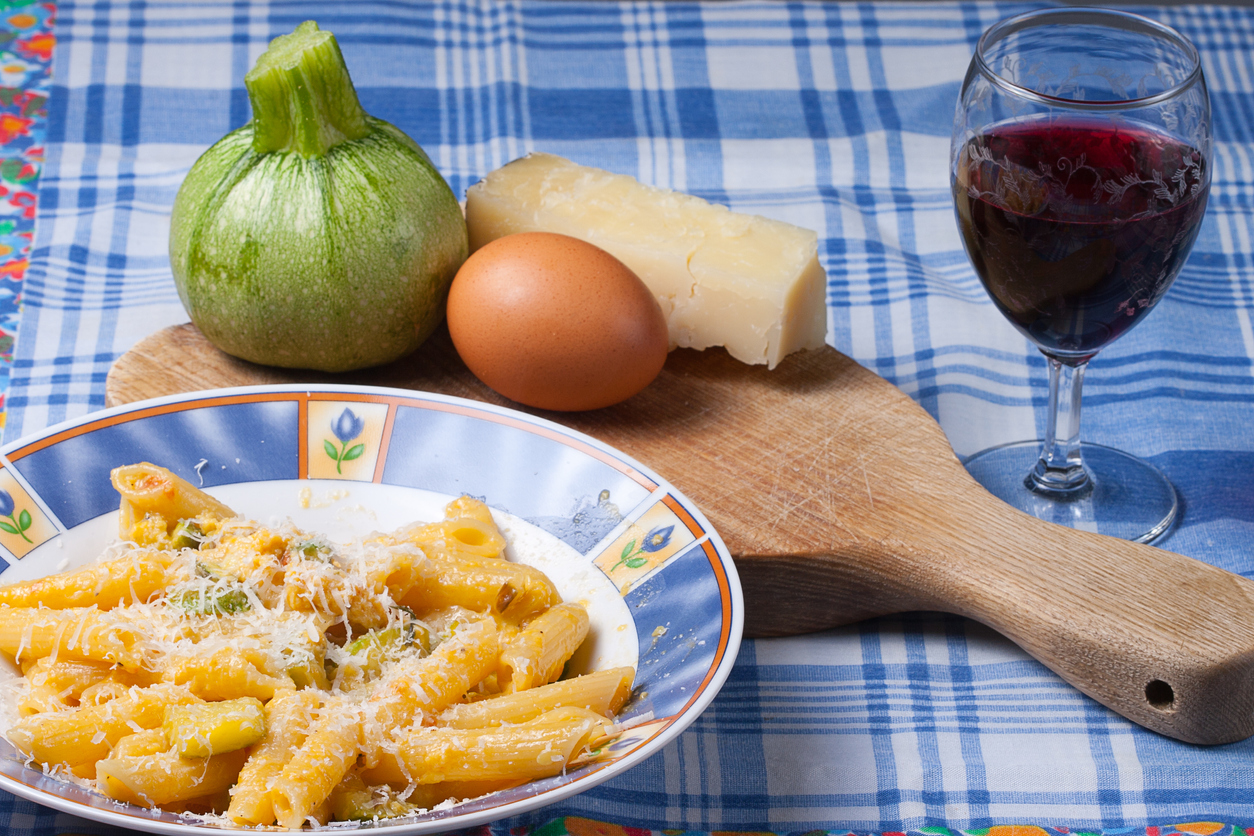 Now onto pasta—Of course you can get creative here, but we have suggested Pasta Zucchini Carbonara!

This recipe, from Renzo Rizzo, former R&D chief of Barilla Pasta Meals, is rooted in the gastronomy of Puglia, the family cuisine of Renzo’s wife. She inherited the region’s taste for simple recipes, using a lot of fresh local vegetables and insisting on high-quality ingredients and clean and recognizable ﬂavors. This recipe is the Rizzo family’s Pugliese interpretation of the original pasta carbonara from Rome.

As with the traditional cuisine from Puglia, vegetables appear in most of the family’s recipes, and their trick is to prepare them in ways that appeal to young children. Like all Italian children, Renzo’s children love pasta (they don’t even call it a meal if pasta is not there!). What better way to make vegetables appealing than mixing them with pasta? This pasta meal is excellent as a main dish; it provides a good balance of vegetables, whole grains, and extra virgin olive oil—all in one delicious dish.

Your dinner party guests will love this dish so much they might even want to join you on an authentic Italian adventure to Umbria or Naples and Amalﬁ. 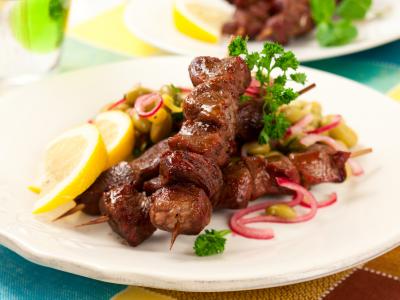 For the next course, since it is a special occasion and oﬃcially spring, we have a recipe for Skewers of Marinated Crete Spring Lamb with Artichokes and Lemons.

The Mediterranean Diet pyramid was based on research ﬁrst funded by the Rockefeller Foundation after World War II—looking at the diets and health of the residents of Crete and Southern Italy. It started as a part of the reconstruction of Crete after World War II and through the research it was discovered that the post-war inhabitants of Crete were much healthier than the post-war inhabitants of the US, which piqued the interest of scientists, particularly one named Ancel Keys who is called the father of the Mediterranean Diet.

Oldways held a conference in 1997 to celebrate the 50th anniversary of these studies and invited scientists, chef, cookbook authors, retailers, etc. We were based in Heraklion and traveled around the island—learning, eating and drinking.  We visited Knossos, learned from Greek chefs, had olive oil tastings, recreated a school house dinner in a mountain village….and then at the end of the week, we asked the chefs who were with us to take inspiration from their week in Crete and create a dish.  This lamb dish is from this Symposium – created by Menlo Park chef Jesse Cool and Chicago restaurateur Deann Bayless. Feel free to skip this course if you’re not interested in the meat!

Lastly, is dessert! Very often dessert in the Mediterranean is simply fruit. But special times call for special treats—sometimes something from a local bakery or something made with love at home.

Orange and almond cake is a classic dessert that draws on the Sephardic traditions of the Mediterranean, Morocco and the Middle East. We love this  Spanish Almond Cake—cooked and eaten all over Spain. It is known as Tarta de Santiago and originated in Galicia (in the northwest corner of Spain) during the time of the medieval pilgrimage known as the Camino de Santiago. The tart is traditionally decorated with the cross of St. James; to this day, pilgrims making their way along one of the many routes appreciate a slice of this tasty Spanish cake after (and during) their long journey. This cake uses almond ﬂour and is naturally gluten-free. With its rich nutty ﬂavors and bright citrusy notes, there is no surprise that it pairs beautifully with fresh fruit.

Now that you have handful of recipes, and hopefully some inspiration—It is time to plan your next Mediterranean Dinner party! If you are hungry for more be sure to check out our recipe library, and if you want to experience a truly authentic dinner party in the Mediterranean, join us on once-in-a-lifetime adventures to Italy in October 2022.