The Fantastic Fats of the Mediterranean Diet: Not Quite Keto

What exactly is a keto diet you ask? Restricting carbohydrate and sugar intake and replacing it with fats (e.g., avocados, walnuts, extra virgin olive oil, coconut oil, grass-fed butter) is the premise. Speciﬁcally, the keto diet seeks to force one’s body into using a diﬀerent fuel. That is, instead of relying upon sugar (glucose) that comes from carbohydrates (such as grains, legumes, vegetables and fruits), the keto diet relies on ketone bodies, a type of fuel that the liver produces from stored fat. It is thought that the reduction of carbohydrates puts your body into a metabolic state known as ketosis, during which you burn fat rather than carbohydrates for energy. 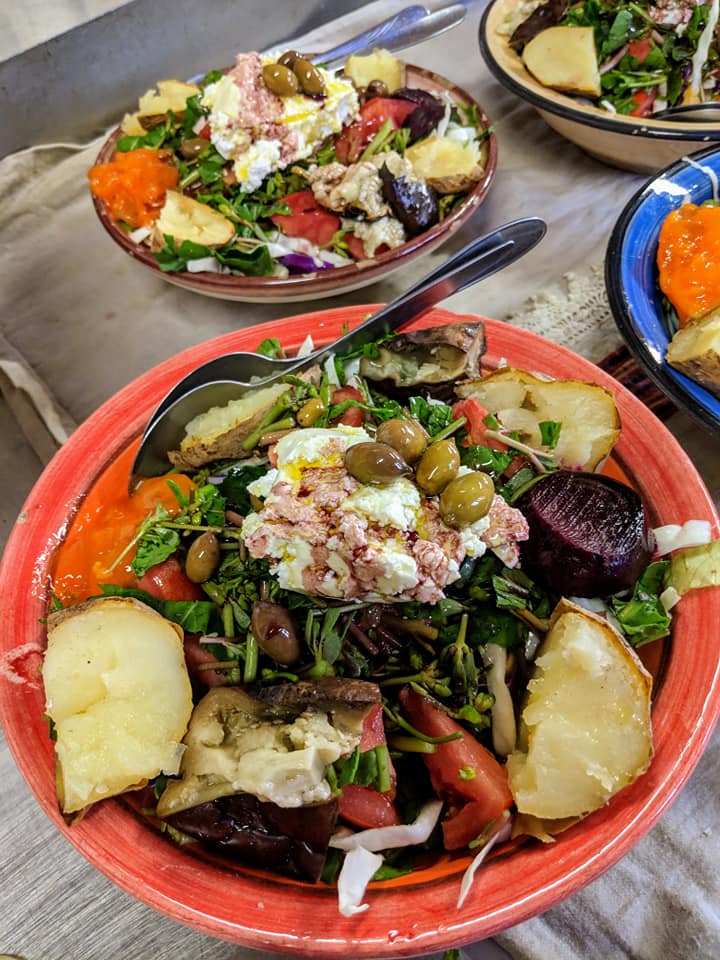 On a culinary tour to Crete, we enjoyed this traditional salad—a mix of vegetables and healthy fats!

While fat breakdown via ketosis can produce impressive weight loss, this “quick ﬁx” can also come at a cost. Doctors warn that starving the brain of its primary energy source could potentially be harmful in the long-term, for patients who do not need a keto diet for medical reasons (like seizures).

A healthier, more balanced alternative can be found in a traditional Mediterranean Diet. Historically, traditional Mediterranean diets have contained moderate amounts of fat, carbohydrates, and protein. We can certainly look to the traditional Geek/Cretan diet, in which more than 35 percent of calories come from fat, as a rule of thumb. Much of this fat comes from the intake of olive oil, which consists mostly of heart-healthy monounsaturated fatty acids.

Greeks are the world’s largest per capita consumers of olive oil, with a national average consumption of around 20 kilograms of olive oil per person per year—roughly 3 to 4 tablespoons, or ¼ cup per day. Olive oil is the main cooking oil, from sautéing to braising, including a wide ariety of olive oil-based dishes referred as lathera, to roasting, grilling, and frying. Olive oil is used generously to dress salads and as the foundation for numerous sauces and marinades. For instance, whole grilled ﬁsh is often served with latholemono, a tasty, simple emulsiﬁed sauce made by vigorously mixing olive oil and lemon juice. Olive oil is also the medium of choice to preserve all sorts of traditional delicacies, from vegetables to cheese to ﬁsh.

Nuts and seeds, which too are sources of healthy fats, play an important role in the Mediterranean kitchen. Common nuts and seeds you might encounter in the Mediterranean include walnuts, almonds, cashews, chestnuts, hazelnuts, pine nuts, pistachios, pumpkin seeds, sesame seeds, and sunﬂower seeds. Nuts and seeds are incorporated into everyday dishes, to include tahini (a main ingredient in hummus), Spanish romesco and picada, Lebanese muhammara (red pepper and walnut spread), and Italian pestoor French pistou.

Nuts and seeds are also pressed into oils. Turkey and France are amongst the world’s largest producers of walnuts. Some of those walnuts get pressed into walnut oil, which is packed with healthy omega-3 fatty acids. Keep in mind that heat destroys lots of the goodness in walnut oil, which is one reason that it is used to ﬁnish a dish rather than as a cooking oil. Walnut oil has a rich, nutty ﬂavor that is perfect for salad dressings, drizzling over ﬁsh or pasta and to give a bit of pizzazz to desserts. Look for cold-pressed ‘virgin’ oil rather than the more commonly found heat-pressed oil, which apparently has fewer health beneﬁts. 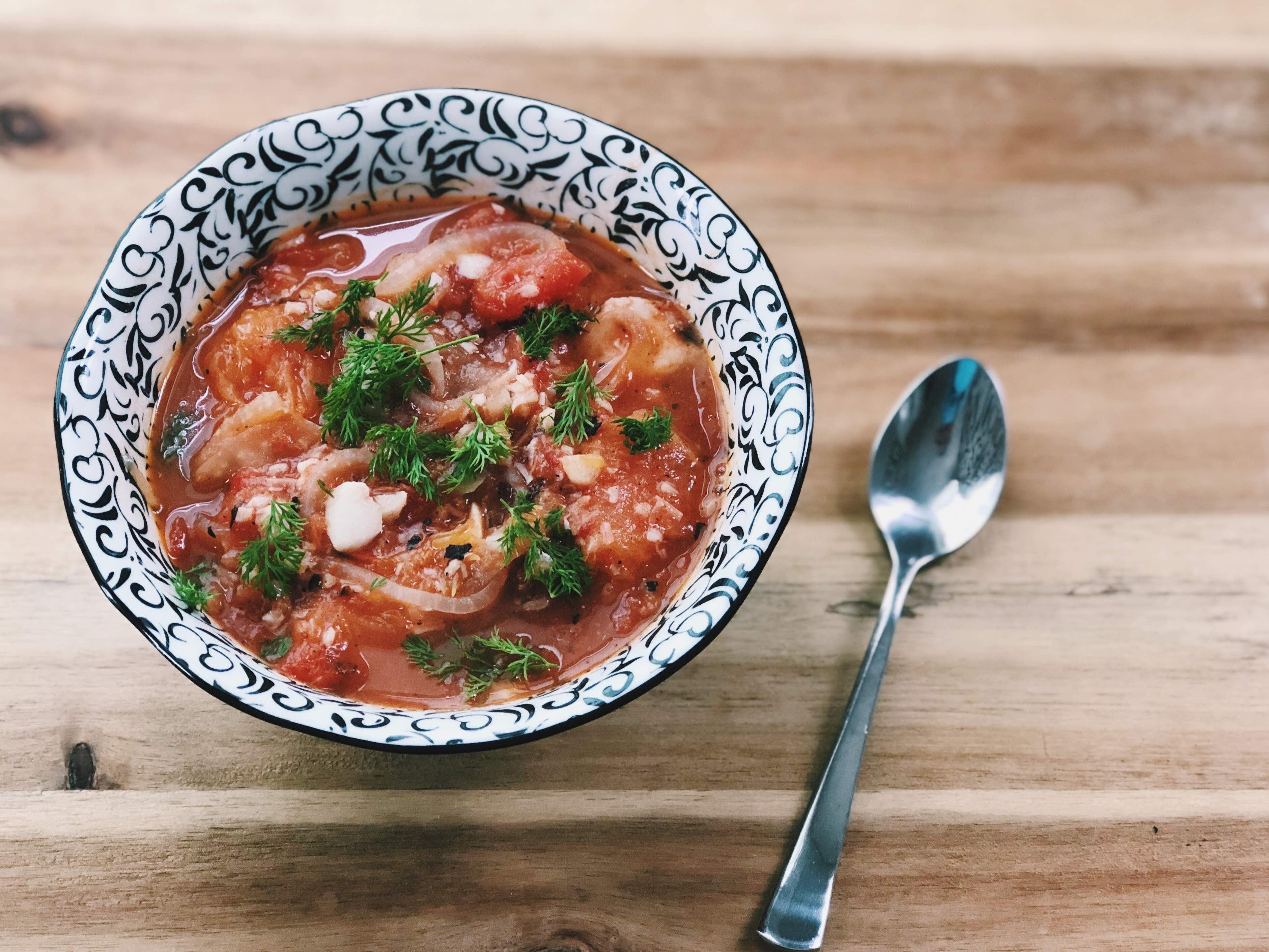 Given that the hub of the Mediterranean is perhaps the Mediterranean Sea, ﬁsh and seafood play an important role in terms of healthy fat consumption. Fatty ﬁsh, particularly anchovies, sardines, mackerel, herring, salmon and tuna, (canned/preserved or fresh) are a vital part of the Mediterranean diet. Rich in omega-3 fatty acids, a type of polyunsaturated fat, they have been shown to reduce the risk of heart disease and stroke. Fish and seafood can be enjoyed simply baked or grilled or turned into tasty seafood stews that abound within the Mediterranean—Greekkakavia, Provencal (Marseille) bouillabaisse, spicy Tunisian chreime, Portuguese cataplana, and Spanish (Catalan) suquet.

French author Anthelme Brillat-Savarin said that “we are what we eat.” Today, we might extend this idea, as Michael Pollan did: “We are what we eat eats, too.” Grass-fed meat and dairy (albeit in moderation) are sources of healthy fats. Animals raised this way, that is, pasture-grazed or grass-fed, tend to be leaner (i.e., less total fat) and healthier (e.g., higher in omega-3 fats) because they are consuming a natural diet of herbs and wild plants. Food for thought.

A 2019 article in The Lancet Diabetes and Endocrinology concluded that “the fear of weight gain from high-fat foods need no longer be an obstacle to adherence to a dietary pattern such as the Mediterranean Diet,” and that these results “lend support to not restricting intake of healthy fats in advice for bodyweight maintenance and overall cardiometabolic health.” Including olive oil, nuts, avocados, or artisanal cheeses in recipes can be a helpful strategy to make leafy greens, whole grains, and legumes even more enticing. It is theses delicious ﬂavors that help make the Mediterranean diet a delicious lifestyle, rather than a fad diet.

Suzanne Capizzano
Why do you reference cold pressed "virgin" olive oil. Cold pressed "Extra Virgin Olive Oil" is without defects in nose and flavor notes (chemical analysis) it has the highest health benefits with phenols, squalene and more. Virgin Olive Oil is a lower grade.
Hannah-Oldways
Thanks, Suzanne! We agree that extra virgin olive oil is a fantastic choice. The comment you are referring to is in reference to walnut oil, not olive oil: "Walnut oil has a rich, nutty ﬂavor that is perfect for salad dressings, drizzling over ﬁsh or pasta and to give a bit of pizzazz to desserts. Look for cold-pressed ‘virgin’ oil rather than the more commonly found heat-pressed oil, which apparently has fewer health beneﬁts."
Susan Chait
Do you have a recipe for the Crete traditional salad pictured above? It looks delicious. Thank you
Hannah-Oldways
Hi Susan, While we don't have a recipe for that particular salad, you can check out our collection of Mediterranean salad recipes here! https://oldwayspt.org/recipes/search?keys=&diet%5B%5D=96&course%5B%5D=salads&items_per_page=12