Since February is American Heart Month, what better way to celebrate than with the Mediterranean Diet—the #1 best heart-healthy diet, according to the 2021 US News and World Report rankings!

The Mediterranean Diet reﬂects a way of eating that is traditional to the countries that surround the Mediterranean Sea. It is abundant in minimally processed plant-based foods—fruits, vegetables, nuts, seeds, legumes, whole grains, herbs and spices—rich in monounsaturated fat from olive oil, and lower in saturated fat, meat, and dairy products. Scientiﬁc evidence has shown that the adoption of the Mediterranean Diet is a protective factor against the onset of various types of cancer, cardiovascular disease, including metabolic syndrome (a condition that includes excess body fat, high blood fats, and high blood pressure), aging, and obesity. 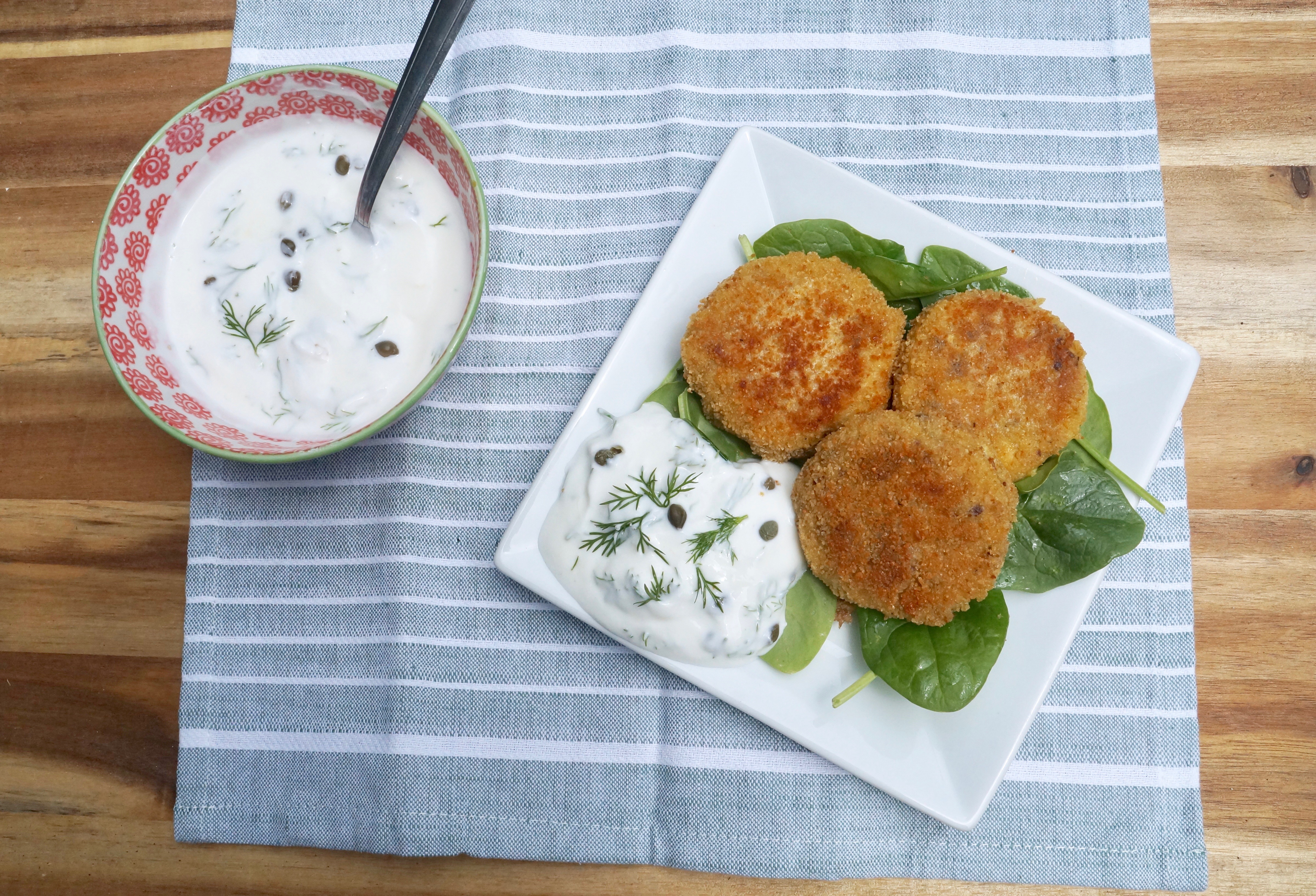 Sardines, like in this sardine patty recipe, are a source of healthy polyunsaturated fats

Early recognition of the beneﬁts of the Mediterranean diet stemmed from a 1950s study led by Ancel Keys from the University of Minnesota and a team of scientists. They set out to study men with heart disease in 21 countries. Keys’ ﬁndings revealed that Finland had the highest rates of heart disease-related deaths at 171 deaths per thousand men. The United States was at 92 deaths; Italy, a Mediterranean country, was at 24; Japan had 13 deaths per thousand and the Greek island of Crete, part of the Mediterranean, had a surprisingly low rate of only 3 deaths per thousand. This latter number astonished researchers, such that they returned to Crete to further study this phenomenon. Interestingly, Crete, with its low rate of heart disease, had an average daily fat intake of 40% of total calories—by no means a low-fat diet. 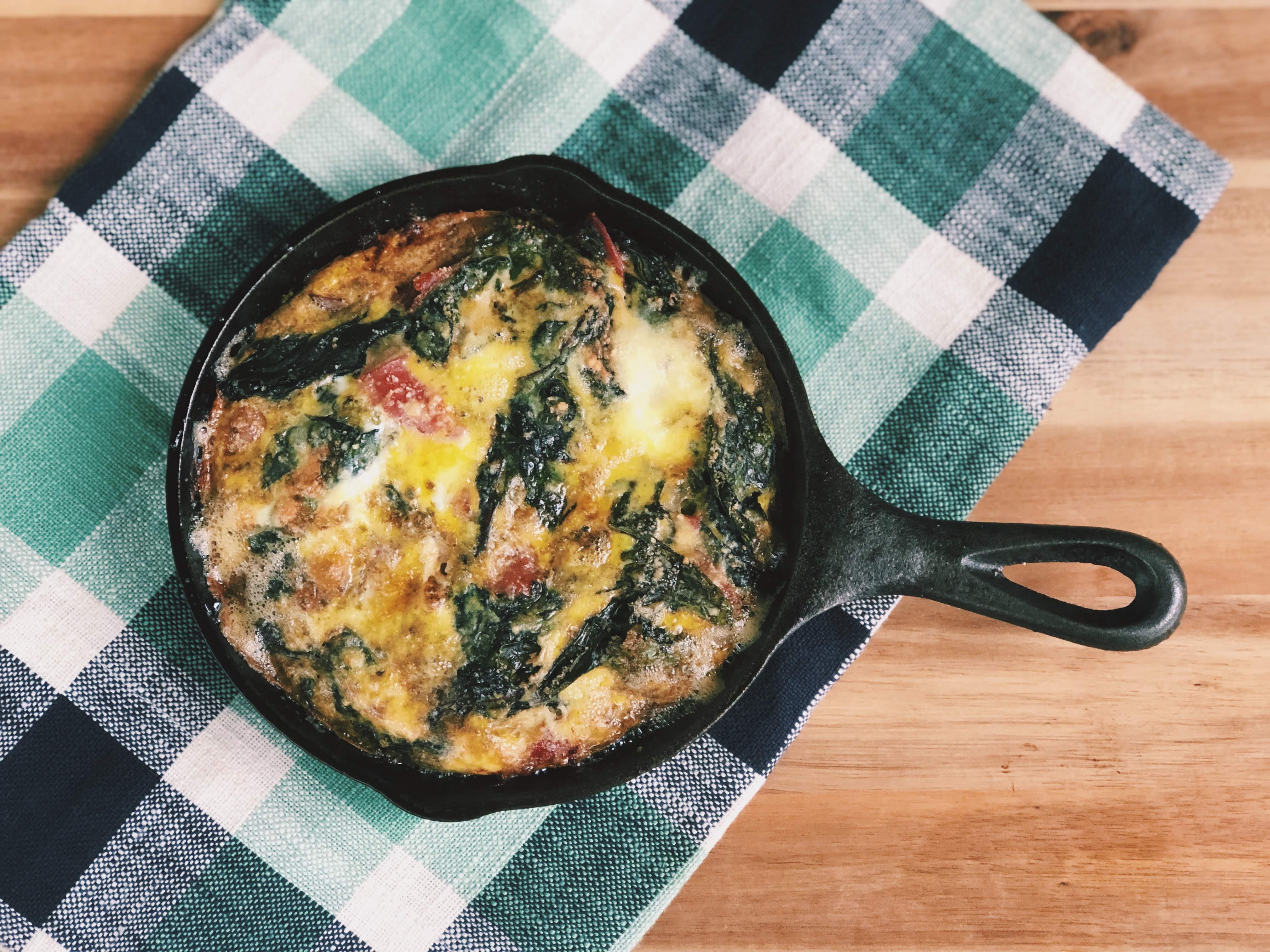 So why is olive oil so good for our health? Extra-virgin olive oil contains numerous phenolic compounds, which are powerful antioxidants that help protect the body against free radicals. Free radicals are molecules that cause cell damage and contribute to disease and the aging process.  Compared with reﬁned olive oils, EVOO comes from the ﬁrst pressing of olives and is rich in antioxidants.

These days, we’ve all heard about the beneﬁts of omega-3 fats. There are three main omega-3 fatty acids. Eicosapentaenoic acid (EPA) and docosahexaenoic acid (DHA) are most abundant in ﬁsh and shellﬁsh, while alpha-linolenic acid (ALA) is found principally in plant oils such as ﬂaxseed and walnut. Fish such as tuna, herring, sardines, anchovies, and mackerel are rich in essential heart-healthy omega-3 fatty acids; shellﬁsh and crustaceans including mussels, clams, and shrimp have similar beneﬁts. Studies have found that eating oily ﬁsh can lower blood pressure and reduce fat build-up in the arteries. Interestingly, ﬁsh oil supplements have not been shown to have the same protective beneﬁts. Thus, it’s recommended that you consume ﬁsh or shellﬁsh twice per week on the Mediterranean Diet.

Of course, we can’t talk about the Mediterranean Diet without mentioning the abundance of fresh fruits and vegetables. A large number of studies have shown that the higher the average daily intake of fruits and vegetables, the lower the chances of developing cardiovascular disease. Green leafy vegetables in particular, such as lettuce, spinach, kale, Swiss chard, dandelion, and mustard greens, are most strongly associated with decreased risk. 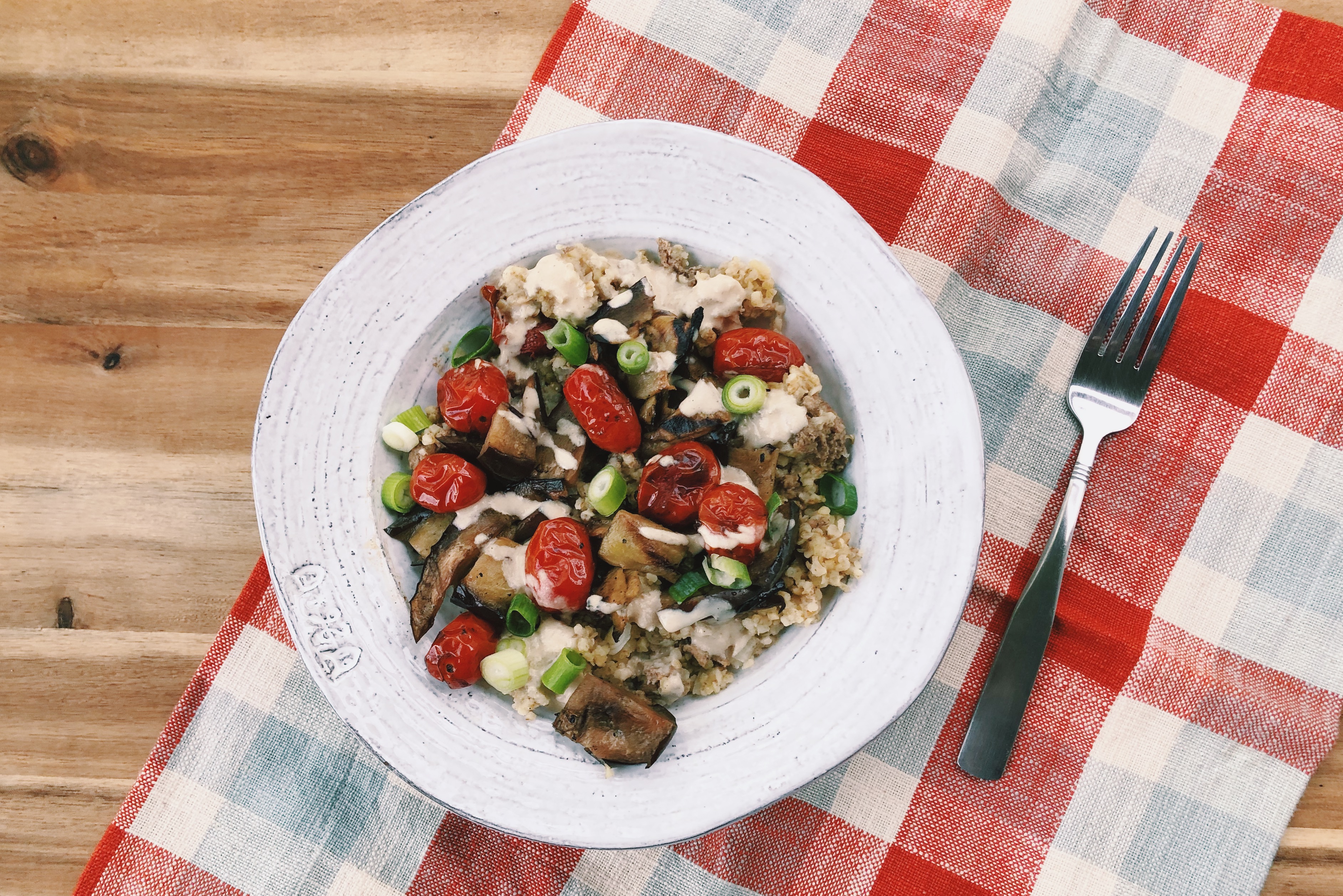 For heart health, think of meat as a garnish, like in this grain bowl with vegetables and lamb.

As for protein, the main protein eaten in the U.S. is meat, whereas the main sources of protein in many Mediterranean countries are beans, nuts, seeds, and ﬁsh. Traditionally, when meat is eaten in the Mediterranean, it is rarely consumed as a whole steak or a burger. Instead, meat is often cut into cubes and stewed with loads of veggies and legumes; the meat acts as a ﬂavoring agent instead of being the main aﬀair. Many research studies show an association between red meat consumption and cardiovascular disease. That is, the more red meat you consume, the higher your long-term risk of heart disease. Cutting back on meat consumption is not only healthy for you, but it’s also healthy for the environment, as meat production is a signiﬁcant contributor of greenhouse gases.

Lastly, scientists are discovering that nutrients have complex synergistic interactions when consumed together. More speciﬁcally, interaction between two or more nutrients working in concert produces a health eﬀect far greater than what would be expected of each nutrient individually. For instance, carrots have plenty of beta carotene (it’s what makes a carrot orange), but it’s fat soluble, which means that beta-carotene needs fat to be absorbed. Thus, when combined with, for example, extra-virgin olive oil a source of heart-healthy fats, we’re able to absorb beta-carotene and other fat-soluble nutrients present in carrots.

In the decades that followed Keys’ original Seven Countries Study, hundreds of other observational and randomized, controlled studies have conﬁrmed that a Mediterranean diet can reduce the risk of heart disease and stroke. To help keep your heart beating smoothly for the long haul, take a cue from the Mediterranean Diet and consume an assortment of nutrient-dense foods. Mix it up with various combinations of minimally processed fruits and vegetables, whole grains, legumes, nuts and seeds, herbs and spices, etc. to realize the most health beneﬁts. It will be the most delicious thing you can do for your health!