While methods of food preservation have evolved from antiquity to modern times, the purpose of food preservation has remained constant—to extend the shelf-life of food by preventing spoilage (i.e., inhibiting the growth of harmful microorganisms). Heat and moisture are enemies of stored food. Water content present in fresh foods and temperatures above 40°F facilitate the rapid growth of bacteria, leading to decay. Preserving the harvest and storing food for the winter months have always been an intrinsic part of the Mediterranean lifestyle. In the days before freezers and supermarkets, salt-curing, sun-drying, pickling, fermenting, smoking, and bottling/canning were employed to preserve food and reduce food waste.

One of the oldest methods of preserving foods known to humankind is sun or air drying. Even today, drying is used to preserve all sorts of foods, including grains such as rye and wheat, legumes, tomatoes, peppers, and chiles. For example, between August and November, in the picturesque Basque town of Espelette, France, you’ll still ﬁnd nearly every house adorned with bunches of Espelette peppers strung across balconies, doorways, and shutters as they turn from a bright ruby red to, eventually, a dark crimson while basking in the sun. 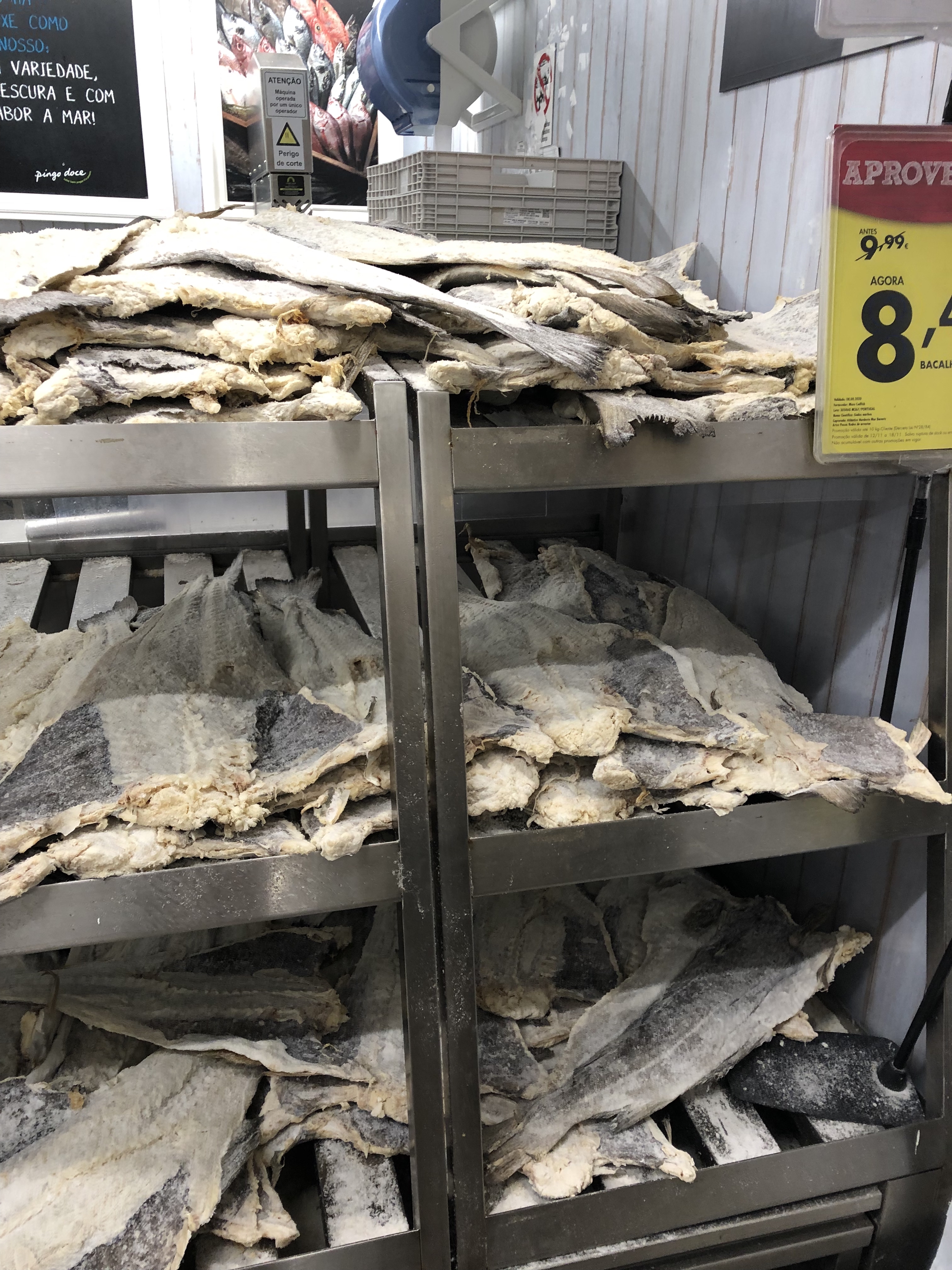 Salt cod (bacalhau) for sale at a market in Portugal.

Salt-curing is another ancient mode of preservation. Salt inhibits the growth of microorganisms by drawing water out of microbial cells. Historically, this method has been used throughout the Mediterranean to preserve ﬁsh (e.g., salt cod, anchovies), fruit and vegetables (e.g., preserved lemons, olives, capers) and meats (e.g., salami, prosciutto). In Portugal, it is said that there are more than 365 diﬀerent salt cod dishes, one for each day of the year (e.g., bacalhau à brás, which combines shredded bacalhau with thinly cut fried potatoes bound together by scrambled eggs; and salada de bacalhau a grão-de-bico, which combines salt cod, chickpeas, and hard-boiled eggs). For most salt-cured foods, a little goes a long way. Olives, salami, and salt cod can all add a delightful savory ﬂavor too dishes, and allow you to cut down on the salt that you might otherwise add to the recipe.

In addition to salt, sugar and honey act as food preservatives. Like salt, sugar draws out water from microbes, which dehydrates and ultimately kills them. The use of sugar is a favorite method of preserving fruits, as we clearly recognize today given the assortment of jams/jellies/compotes/preserves lining supermarket shelves. The ancient Greeks and Romans were responsible for perfecting the art of jelly/jam production by utilizing heated sugar and fruit pectin as an emulsiﬁer.

Fermentation is one of the most important forms of preservation throughout the Mediterranean. Since these processes typically cultivate the growth of beneﬁcial microbes to crowd out the harmful microbes, nutrition scientists suspect that fermented foods may oﬀer additional beneﬁts to our gut microbiome. Fermentation is a metabolic process by which yeast and certain bacteria convert a carbohydrate such as starch or sugar into an alcohol or an acid. Lactic acid fermentation (lacto-fermentation) is responsible for pickles, yogurt, and sourdough bread. The salt-water brine used in lacto-fermentation creates an anaerobic (without oxygen), acidic environment—making it inhospitable for harmful microbes—that allows enzyme-rich fermented foods to be kept in cool storage for months during the cold months when fresh produce is scarce. Other types of fermentation include ethyl alcohol fermentation, responsible for the production of wine, mead, and beer and acetic acid fermentation, yielding vinegars and kombucha. 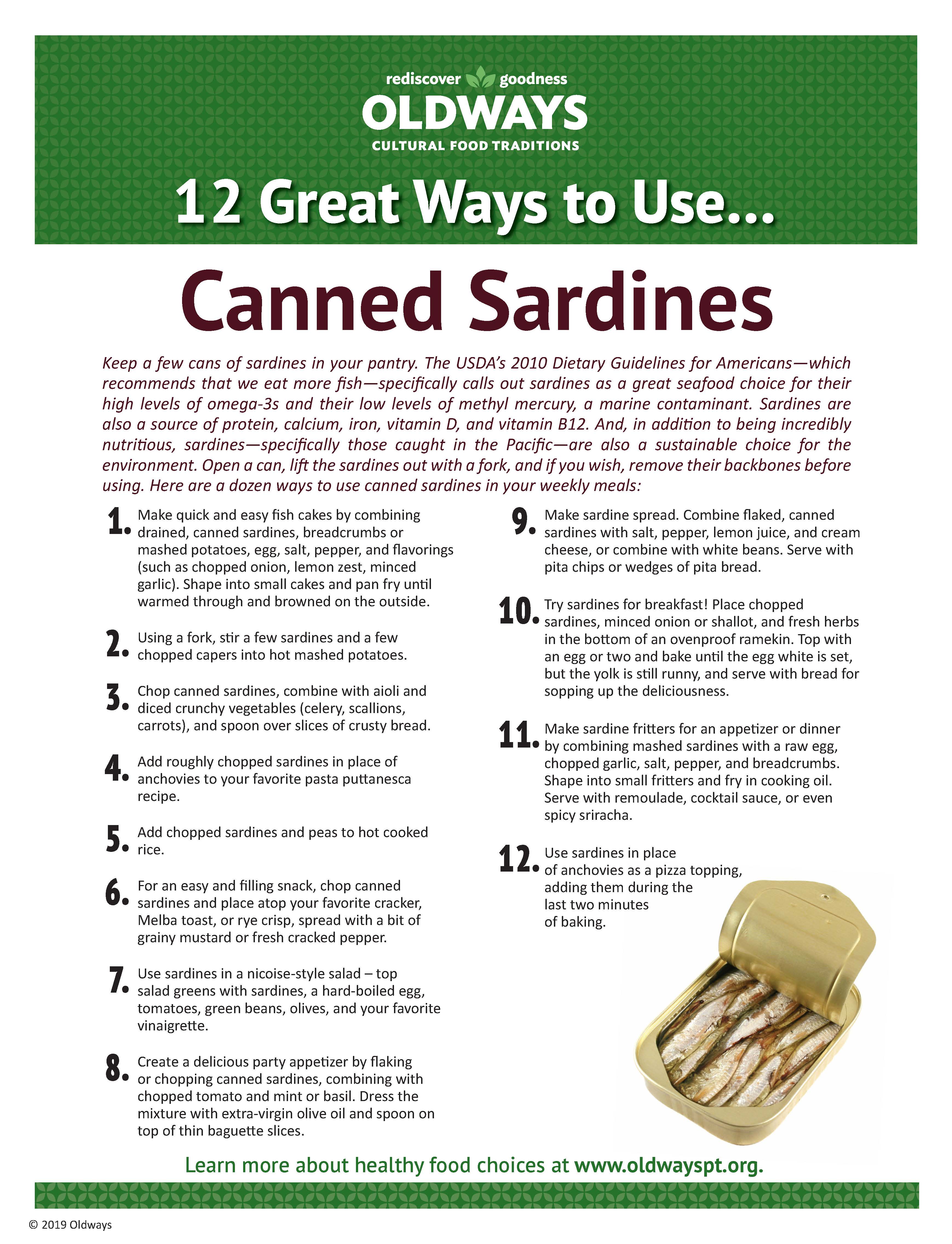 In the United States, we might not think much about canned ﬁsh. However, in the Mediterranean, sardines and other canned seafood are prized, even revered. In 19th century Brittany (France’s northwesternmost region), ﬁshermen fried sardines and placed them into clay jars called oules to preserve them. In 1824, the Frenchman Joseph Colin established a sardine-tinning factory and created what we now know as the canned sardine; Colin adapted the tinning process from his colleague, Francois Appert, who had been experimenting with preserving sweets in sugar. Colin discovered that olive oil made for a better preserving agent for sardines. By 1836, Colin was producing approximately 30,000 cans of sardines annually. Such success led him to expand operations to about 30 other small factories. By 1880, the region was turning out in excess of 50,000,000 tins per year. Today, you’ll ﬁnd grocery stores and specialty food shops adorned with shelves of canned ﬁshes and other assorted seafood (e.g., octopus, mussels, clams, etc.).

While canning is a relatively recent innovation in the history of food preservation, smoking may be as old as our paleolithic ancestors. The exposure of meat and ﬁsh to smoke not only adds ﬂavor and color, but also acts as a preservation technique. Smoking is not just limited to ﬁsh and meat. For instance, in Spain, smoked paprika (pimentón), a key ingredient in paella and chorizo, is made by drying peppers over smoking oak wood. Over a period of about ten to 15 days, the hot air and smoke help to evaporate the moisture in the peppers and impart its distinct smoky ﬂavor.

Foods don’t have to be formulated with endless additives and preservatives to be shelf stable. With a little bit of ingenuity, our Mediterranean neighbors were able to preserve the life of everyday foodstuﬀs, including healthy fruits, vegetables, and ﬁsh, simply by using a few pantry staples and time-honored traditions. No matter what the season, it is always easy to add a splash of Mediterranean ﬂavor to your meals.

Julie Acker
I love the 28 day challenge to help learn eating Mediterranean daily. This sounds like a nice addition