Nearly two dozen countries border the Mediterranean Sea, so it’s not surprising that ﬁsh and seafood feature prominently in the Mediterranean diet. Nearly every coastal Mediterranean region has its own version of seafood stew. While variations of seafood stew have evolved over time, many originated from humble beginnings, that is, as a means of utilizing less desirable types of ﬁsh (i.e., ﬁsh that were too bony or too small to be prepared in other ways). 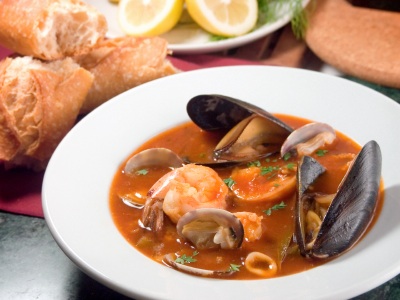 Bouillabaisse, from the southern French port city of Marseille, is a spicy ﬁsh stew. Originally, bouillabaisse was a frugal ﬁsherman’s stew of leftovers (i.e., bones, heads, and tails from the day’s catch and ﬁsh too small to sell). Over time, variations of bouillabaisse have been created, though traditionally a bouillabaisse includes the rascasse ﬁsh, also referred to as the scorpion ﬁsh. However, in the US, not all traditional ﬁsh are available, and the recipe is at the discretion of the chef.  In addition to an assortment of ﬁsh, bouillabaisse can include potatoes, onions, fennel, saﬀron, orange zest, wild herbs, and/or local wine. Bouillabaisse is typically served with garlic-infused croutons and rouille (ROO-ee), a traditional Provençal sauce made from garlic, breadcrumbs, and olive oil that has a similar consistency to aioli, a garlicky mayonnaise.

Brodetto, from brodo meaning broth, is a seafood stew that originated from the Marche region of Italy, between Emilia Romagna and the Abruzzi. Similar to bouillabaisse, brodetto was customarily made from the leftovers and unwanted scraps that couldn’t be sold at the market, including the scorpion ﬁsh (scorfano in Italian). According to historical accounts, in Marche, a classic brodetto contains 13 types of seafood, the number thirteen representing the 13 guests of the Last Supper. Tomatoes, olive oil, and wine round out this stew.

Brodet is Croatia’s version of brodetto and is made with at least three diﬀerent kinds of thick, meaty ﬁsh, such as scorpion, rockﬁsh, and perch. Shellﬁsh (e.g., scampi, mussels, crabs) and conger eel can also ﬁnd their way into brodet. Brodet is often served with polenta, which acts as a sponge to soak up the ﬂavorful broth.

Cacciucco is an Italian ﬁsh stew native to the western coastal towns of Tuscany and Liguria. Traditionally, no fewer than ﬁve types of ﬁsh go into cacciucco, reportedly, one type of ﬁsh for every ‘c’ in its name. Anything from ﬁsh (e.g., red mullet, sole, monkﬁsh, sea bass) to seafood (e.g., cuttleﬁsh, octopus, prawns, mussels, squid, and scallops) is fair game for cacciucco.

Chreime is a spicy Tunisian ﬁsh stew of Sephardic-Jewish origin. Traditionally, inexpensive cuts of ﬁsh (ﬁrm white ﬁsh cut into steaks) were used. The ﬁsh steaks are braised in a thick, spicy tomato-based sauce spiced with plenty of paprika, cumin, and caraway seeds.

Kakavia is a classic Greek ﬁsherman’s stew and is considered to be the precursor to bouillabaisse, making its way from Greece to Marseille around 600 B.C. and evolving into modern-day bouillabaisse. Kakavia is named for the cooking vessel, known as a kakavi, in which it is prepared. Like other seafood stews from the Mediterranean, there are many variations. The type of ﬁsh/seafood varies depending on the day’s catch, often rockﬁsh or petropsara, especially scorpion ﬁsh, along with small, bony ﬁsh such as perch and mullet, which makes for a thick, gelatinous, hearty stew. Vegetables such as potatoes, onions, and celery are cooked in plenty of olive oil before the ﬁsh is added.

Zarzuela de mariscos is a seafood stew from the Catalan coast of northeast Spain. The main ingredient is, not surprisingly, seafood, anything from ﬁsh, mussels, clams, and shrimp to calamari, along with potatoes and tomatoes. Its foundation also includes a picada, a traditional Catalan sauce made from roasted and ground almonds, fried bread, garlic, and chile. The aforementioned ingredients are crushed into a dense paste, resulting in a thick, hearty sublime stew with pronounced depth of ﬂavor.

Chef David Shalleck
Great article! Thank you for giving us a tour of the Mediterranean vis-a-vis the wonderful fish stews of the coastal regions!