In the countries surrounding the Mediterranean, family dinners and large gatherings often consist of an assortment of small plate dishes—known as mezze—including any number of dips and spreads. You could travel around the Mediterranean and readily subsist solely on dips and spreads, which can be made from legumes, vegetables, yogurt and cheese, ﬁsh, and meat.

Legume-based
We’re all familiar with the widely popular whipped chickpea and tahini spread known as hummus. Masabacha, a popular variant of this Middle Eastern chickpea spread, is a kind of deconstructed hummus in which most or all of the chickpeas are left whole and tossed with the tahini sauce, instead of being puréed into it. 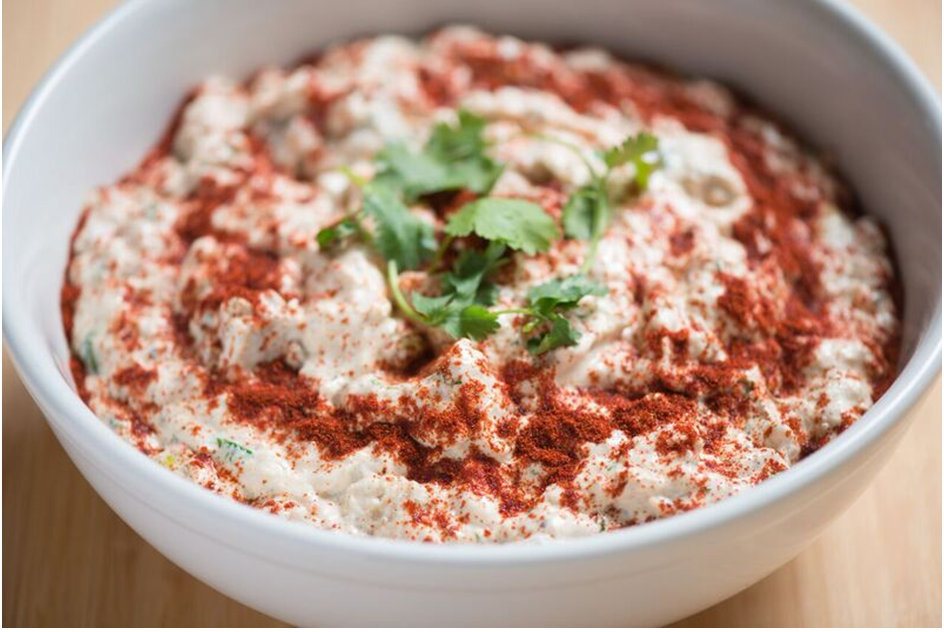 Beyond chickpeas, there’s a popular Greek legume spread from the island of Santorini know as fava. Contrary to its name, Greek fava is not made with fava beans as one might expect, but instead features yellow split peas. It’s a simple, yet ﬂavorful hearty dish in which the split peas are simmered with onion and garlic until very tender. Thereafter, you add a few healthy glugs of peppery extra virgin olive oil and blend until smooth (or mash for a slightly chunkier version). Greek fava is commonly served warm or at room temperature, topped with chopped onion and parsley and drizzled with a little more olive oil. “Mediterranean-ize” your meals with a boost of plant protein by adding a spread of hummus or Greek fava to your sandwich instead of mayonnaise.

Vegetable-based
In the Mediterranean diet, vegetables ﬁnd their way into nearly every dish, and dips and spreads are no exception. Baba ghanoush and mutabbal are two popular smoky eggplant dips you’ll ﬁnd in the Mediterranean. The biggest diﬀerence between the two is the use of tahini. Moutabbal includes tahini; baba ghanoush generally does not. Baba ghanoush also commonly includes chopped tomato, pomegranate molasses and fresh herbs. The smokiness  in both of these dips is achieved by cooking the eggplant over an open ﬂame until the skin is charred and the ﬂesh is tender. Israel has a similar eggplant spread known as salat ḥatzilim that entails frying or grilling the eggplant and then mixing it with mayonnaise, salt, lemon and chopped fried onions.

Red peppers ﬁnd their way into a variety of Mediterranean spreads. Romesco is a rich and hearty Spanish sauce made from roasted red peppers, garlic, toasted almonds and/or hazelnuts, olive oil, dried chile peppers (a variety known as ñora peppers) and Sherry vinegar. This complex and nutty sauce is traditionally served with calçots, a variety of green onion or scallion from the Catalonia region in northeast Spain. Each year between January and the end of April, Catalans celebrate a ritual called a calçotada wherein friends, neighbors and family gather to eat lots of charred calcots with romesco.

Harissa is a North African (Tunisian) roasted red pepper-chile paste made from dried chiles, garlic, olive oil and toasted spices; harissa is added to seemingly anything and everything—soups and stews, meat, vegetables, eggs, couscous, etc. Htipiti is a classic Greek roasted red pepper and feta spread mixed with olive oil and thyme. The sharp and salty bite from the feta pairs perfectly with the smoky sweetness of the roasted peppers. Muhammara is yet another red pepper-based spread, in this case originating from Syria. This blend of red peppers, walnuts, olive oil, pomegranate molasses, is sweet, tangy and slightly spicy.

There are also a number of garlic-based Mediterranean spreads. For example, toum is a garlicky Lebanese condiment, similar to aioli; more speciﬁcally, toum is a sauce made from olive oil that has been emulsiﬁed into mashed garlic, usually with a mortar and pestle until thick and creamy. Greek skordalia is a garlicky, mashed potato dip that is ﬂavored with olive oil, vinegar, almonds and plenty of garlic.

Yogurt & Cheese-based
Unlike the cream-based sauces prevalent in the U.S., many dairy-based dishes in the Mediterranean are fermented, meaning they often contain beneﬁcial probiotics, or “friendly bacteria” that is good for your gut. Labneh, or yogurt-cheese, is a tangy, thick and creamy spread consumed widely in the Eastern part of the Mediterranean. Labneh can be jazzed up with a splash of extra virgin olive oil and any number of herbs and spices, such as za’atar or sumac. Turkish cacik and Greek tzatziki are yogurt, cucumber, and herb (such as dill, mint, parsley)-based dips. You can enjoy them with bread or veggies, and they also makes a great dip for meats like kebabs. In Greece, you’ll encounter tirokafteri, a spicy feta cheese spread served with warm pita to scoop it up. 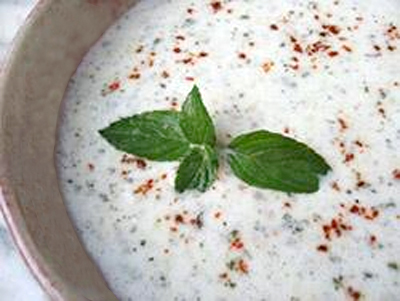 Fish-based
Taramosalata is an iconic  Greek ﬁsh roe dip made from tarama, that is, salted and cured ﬁsh roe that has been mixed with olive oil, lemon juice and a starchy base of bread or potatoes, or sometimes almonds. Known as brandade in France, baccalà mantecato in Italy and brandade bacalao in Spain, this appetizing seafood-based spread is an emulsion of salt cod whipped with olive oil and half-and-half until smooth, rich, and creamy.

Meat-based
Pâté, French for paste, is a spread comprised of meat, seasonings, and fat. While liver pâté is perhaps the most well-known type, pâté can also be made from other cuts of meat (beef, pork, wild game), seafood, or even vegetables. In any case, it’s delicious simply spread on crispy whole grain toast or crackers.

Gail
Interested in Greek Cuisine
Hannah-Oldways
Great! For more emails and recipes, you can subscribe to Fresh Fridays by clicking the Subscribe button at the bottom of this page.