April 4th marked the end of Passover as well as the celebration of Easter and the end of the Christian Lenten season.  This year, Ramadan, the month of fasting and prayer for Muslims begins on April 12th.  Greek Orthodox Easter is celebrated a bit later on May 2nd, because its date is based on the Julian calendar, rather than the Gregorian calendar widely used by other countries.  No matter the date, no matter the traditions and beliefs, no matter the country, each of these holy holidays comes with its own traditional celebratory dishes.

The word Seder translates to “order,” and is the traditional meal eaten on the ﬁrst and second nights of Passover. In addition to food, the seder includes singing, readings, prayer, and the story of the liberation of the Israelites from slavery in ancient Egypt. Food writer and cookbook author Jamie Geller has a wonderful infographic which explains the signiﬁcance of the elements on the Seder Plate:  a roasted egg, bitter herbs, a shankbone, a vegetable, a second bitter herb, and charoset (haroseth), a mixture of apple, wine, and nuts. To go along with the Seder Plate are traditional Passover dishes whose names are familiar to many — matzoh ball soup, geﬁlte ﬁsh, and a roasted chicken or beef brisket.

New York Times columnist and cookbook author Joan Nathan has written many articles and books about Jewish cooking including Jewish Cooking in America, which in 1994 won both the James Beard Award for the best American cookbook and the IACP/Julia Child Cookbook of the Year Award.  Who better to consult for an interesting Mediterranean take on a traditional Seder dish?

Several years ago, she wrote a New York Times column, “A Seder Feast in Provence, with Roots in Ancient Rome,” about the seder traditions of the Provencal village of Carpentras, just north of Avignon.  Built in 1367, the synagogue in Carpentras is one of the oldest active synagogues in Europe, with about 100 members of the congregation today.  While many members have North African roots and include tagines and vegetable salads on the Seder table, Joan writes about Gilberte Levy, a lifelong resident whose family has been in Carpentras since the 1600s, who prepares a Provencal version of Haroseth. 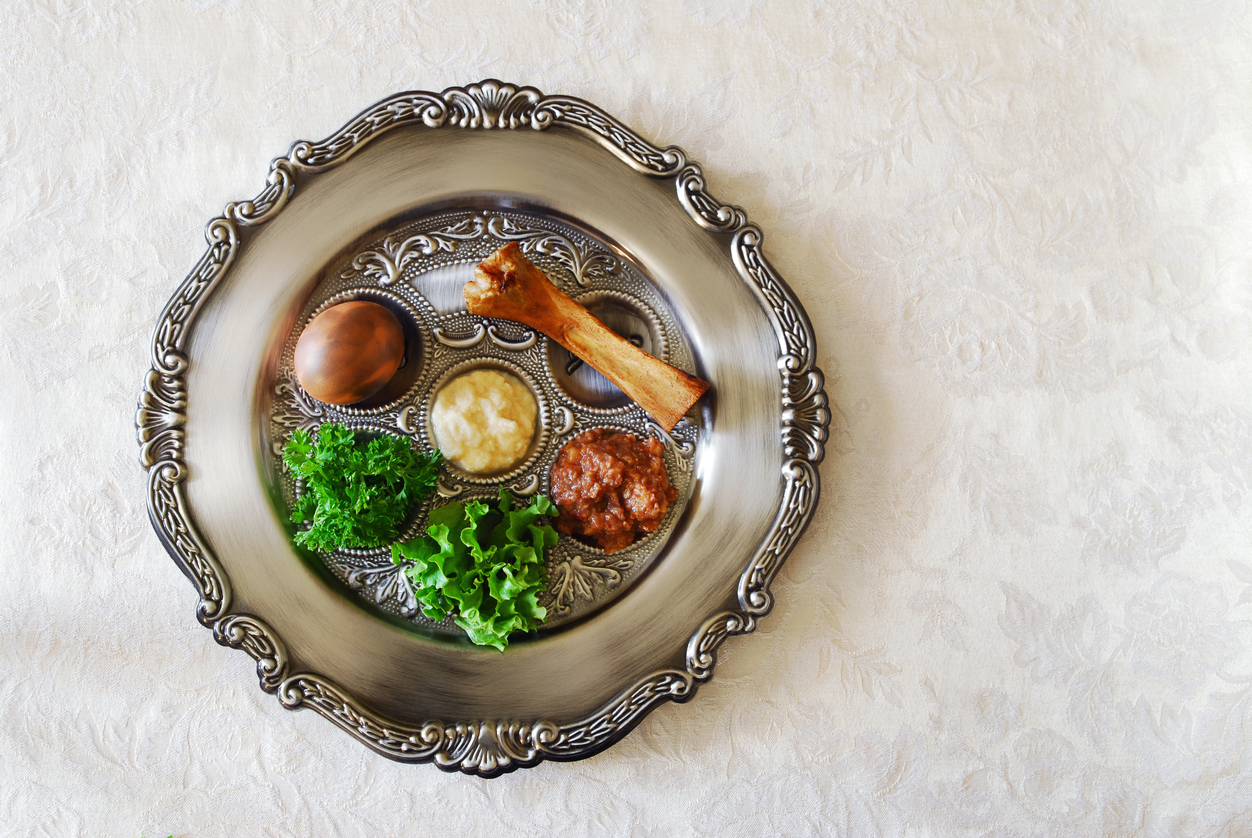 “Haroseth, the fruit paste that evokes the bricks and mortar used by Jewish slaves in the Passover narrative of the Old Testament, is part of every Seder ritual. Her 13th-century recipe includes dried apricots, ﬁgs, raisins and chestnuts, reﬂecting the sunny climate of this Mediterranean region.” Joan Nathan, New York Times, March 20, 2018

For more expert advice from Joan Nathan, check out her helpful suggestions in a 2012 New York Times article on how to prepare for 40 guests, “Passover Seder, Smoothly Done.”

One additional note:  It is well known that during Passover all leavened breads must be avoided.  In the past, some Ashkenazi Jews (European heritage) also avoided rice, corn, beans, and lentils during Passover.  For some, this tradition changed in 2015 when the Rabbinical Assembly ruled that rice, corns, beans, popcorn and other similar foods could be eaten during Passover.

Eggs are also an important symbol at Easter time, symbolizing the resurrection of Christ.  Throughout the Mediterranean, sweet breads made with eggs (brioche) are a staple at Easter time.

La gâche in France (mainly the Vendée region), La Mouna or Mona in Andalusia by way of North Africa, Colomba in Italy, or Tsourike in Greece all have the common elements of eggs and sweetness, and can include local ingredients like mastic and mahleb in Tsourike (Greece), the citrus in La Mouna (Spain) or be made into a special shape like the Easter Dove of the Colomba (Italy).  There are many legends about the import of the dove, and while they are all about peace, none are conclusive. 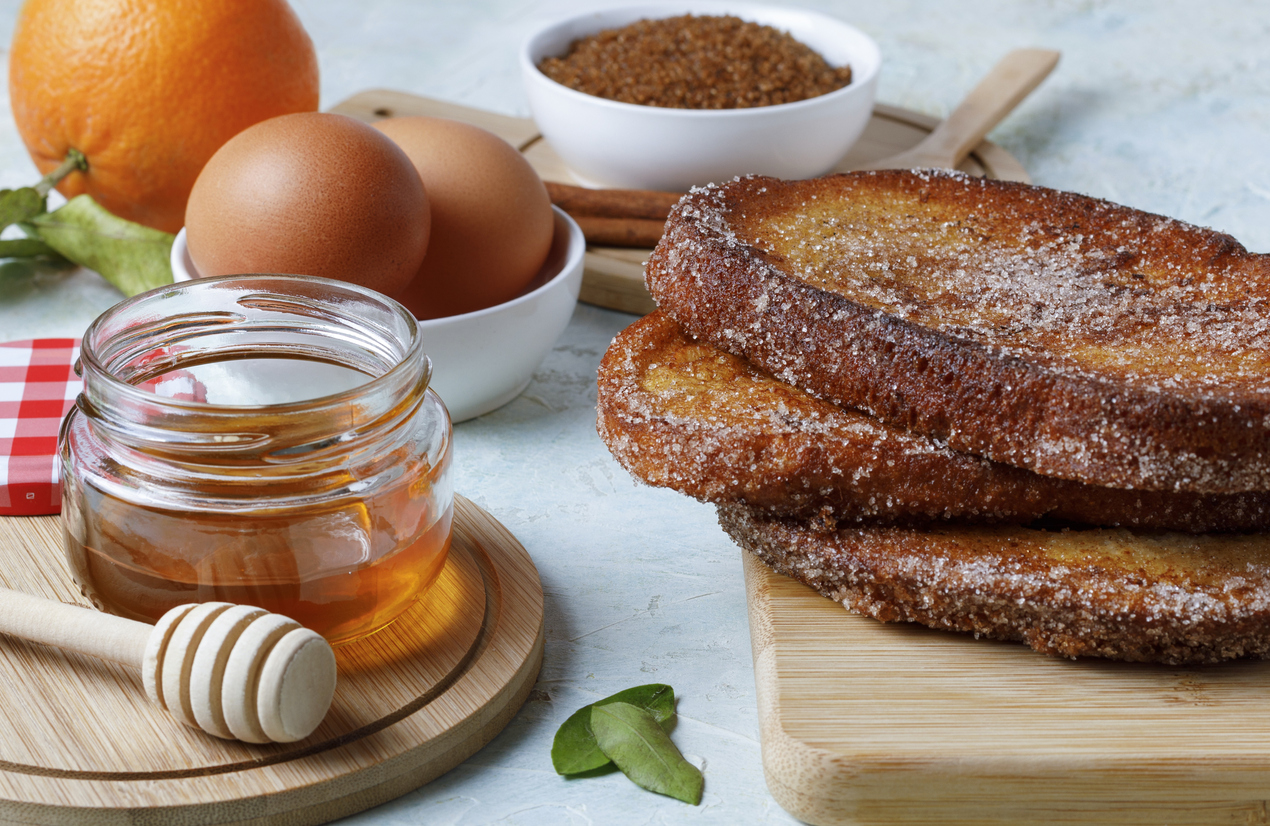 In the Italian region of Umbria, another bread – La Torta di Formaggio con il Capocollo – similar to a panettone with cheese and served with Capocollo, a dry-cured salume, is made at Easter time.  Torrijas are a traditional bread enjoyed at Easter time in Spain.  There are many versions of torrijas; in essence they are a version of French toast, created as a way to use stale bread.  Stale bread is soaked in sweetened milk, ﬂavored with vanilla or cinnamon, then soaked again in a beaten egg and fried in olive oil, ﬁnished oﬀ with sugar and cinnamon.

For the Easter meal, the traditional dish is lamb, baked in the oven and served with green beans and potatoes.  The lamb is seasoned with garlic, pepper, olive oil, and a variety of herbs such as rosemary or herbs de Provence. Potaje de Vigilia – or the vigil stew – is a traditional Easter Week soup served on Good Friday in Spain. It is made with chickpeas, chard (or spinach) and codﬁsh, ﬂavored with cumin and saﬀron and garnished with a hard-boiled egg and olive oil.  It can be enjoyed throughout the Easter weekend — the soup-stew even improves and intensiﬁes in ﬂavor over time.

Food writer and cookbook author Aglaia Kremezi says “Easter for Greeks is what Thanksgiving is for Americans: a glorious family feast with dishes that make the most of the young season’s early produce.”  She also theorizes that the Greeks’ love of spring lamb may be because it is the dish served on Easter, the end of the Lenten ban on eating foods derived from animals with warm blood (meat, dairy and eggs).  She also thinks that it could be that spring lamb, roasted on a spit or grilled over a ﬁre, is just so fabulously delicious. 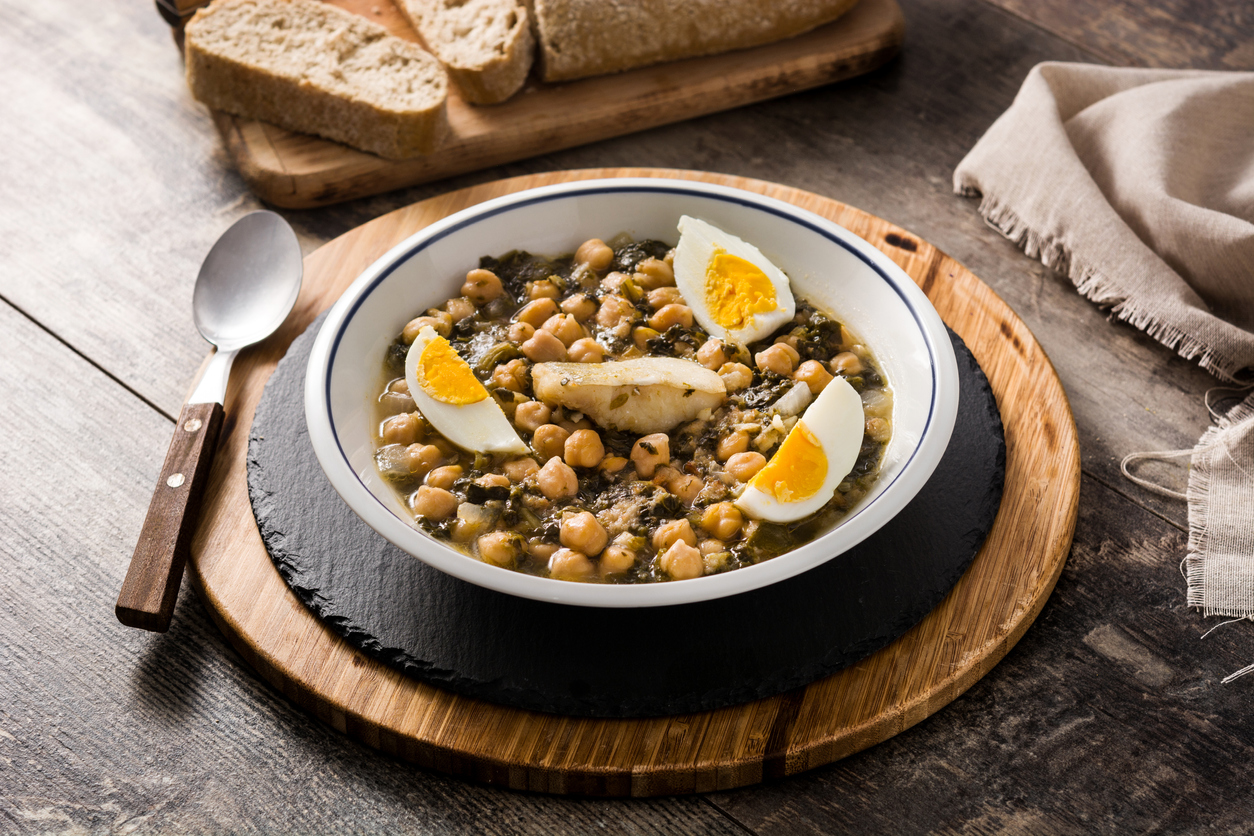 To go with lamb, the Greek Easter meal includes mezethes (meze), roasted potatoes with lemon and garlic, Greek cheeses, savory pies, salads, beans, and of course, eggs.  After the Lenten days of not eating eggs, there is a tradition of dying hard boiled eggs red, representing the blood of Christ. Cookbook author and TV host Diane Kochilas says she no longer uses commercial dye, but instead uses the skin of red onions to color the eggs. Tsoureki, the sweet bread made in Greece is also essential.  As dietitian and cookbook author Elena Paravantes writes, tsoureki is made with eggs, milk and butter, “celebratory ingredients to be enjoyed after the 40-day period of fasting where animal products were avoided.”

During Ramadan, a month-long period of prayer and reﬂection for Muslims, food traditions play an important role.  Each day throughout Ramadan, there are two meals, one early in the morning before the day starts and one at sunset.  The time between the two meals is a time of fasting.  Fasting is one of the ﬁve pillars of Islam, intended to teach compassion for the poor and needy, and provides an opportunity to focus on spirituality.

Before and after the time of fasting is when Ramadan’s food traditions come in.  Suhoor is the pre-dawn meal eaten before the ﬁrst prayer of the day.  It is important that this meal is energy-packed, in order to last throughout what can be a 12-14 hour period (depending upon the month of Ramadan). Traditional foods for Suhoor are eggs, labneh (strained yogurt) and cheese, rice pudding, fava beans, vegetables, and ﬂatbreads.  Fresh fruits are widely consumed, as they provide extra hydration, along with drinking plenty of water.

At sundown, families gather for Iftar. The fast is traditionally broken by eating dates, as Mohammed did. Iftar meals can be very elaborate, and feature stews and soups, breads, ﬁsh and meat dishes, salads, and of course, a sweet ending, like asure, also called Noah’s Pudding, a dessert porridge that is made of a mixture of grains, fruits, dried fruits, and nuts. The Iftar menu is a Mediterranean diet menu, for sure, bringing together whole grains, beans, vegetables, spices and herbs, some ﬁsh and meat with mezzes including hummus, and dishes like lentil soup or stew, ﬁshstew, Harira (a lamb, bean and lentil soup), tagines, Fattoush, stuﬀed vegetables, kibbeh, among many others. Juices are important as well, in order to rehydrate after a day of nothing to eat or drink. 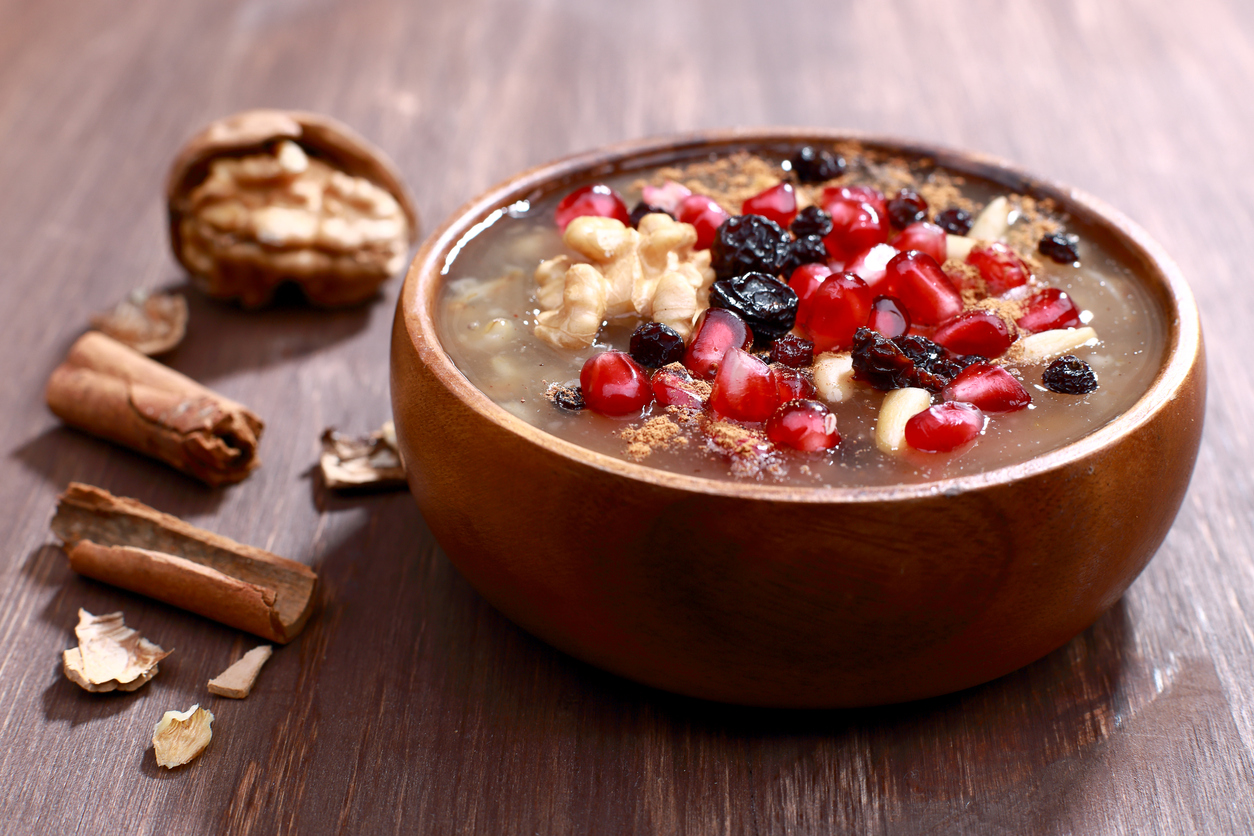 Celebratory dishes abound throughout the Mediterranean, and not just in this spring season of Passover and Easter, and this year, Ramadan, but whenever there is something special to acknowledge, to celebrate, or recognize through reﬂection. The Mediterranean Diet oﬀers a huge variety of ways to bring together good health, great taste and celebration.  The recipes here are certainly something to celebrate!

Sharon Long
This article is so educational and enjoyable.
Michelle O. Fried
During Holy Week in Ecuador, every household must make and share the incredible soup FANESCA. It must be an Andean-enhanced variety of Potaje de Vigilia – or the vigil stew from Spain. Along with the dried cod, many varieties of fresh beans and squash (all native to the Americas) form this superb Holy dish which, like in Spain is garnished with hard-boiled eggs.
Katherine-Oldways
Thank you for sharing! Fanesca sounds amazing.