In 1993 Oldways created the Mediterranean Diet Pyramid— in partnership with the Harvard School of Public Health— as a healthier alternative to the USDA’s original food pyramid.  The World Health Organization signed on in 1994, and in 2008 a panel of nutrition scientists updated the Pyramid. One big change they made in 2008 was to bring all the plant foods at the base of the Pyramid into one big category, with the advice, “base each meal on these foods.”

If you’re making soup, this advice is incredibly easy (and delicious) to follow. 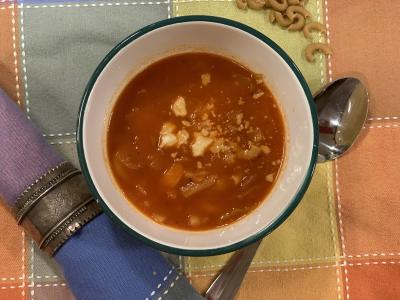 Starting with Italy, it’s hard to pick among so many wonderful options. Minestrone is a classic Italian (and Mediterranean) vegetable soup. There are many versions of the soup – changing by seasons, location and whether or not you choose to include any meat or pasta.  The constants are vegetables and beans. We like to add a Parmigiano Reggiano rind as it cooks, adding a silky texture to the soup. Cookbook author and founding host of The Splendid Table,  Lynne Rossetto Kasper writes of minestrone, “Good minestrone depends upon letting all the vegetables cook long enough to exchange personalities. The formula here is the essence of country soup making: use what’s in season, deepen the soup’s character with plenty of onion, sauté some of the vegetables for contrast, and don’t forget the beans and herbs for ﬂavor and body. Then let heat and time do the work.” Our pick is an adaptation of Andrea Chesman’s Minestrone on The Splendid Table. 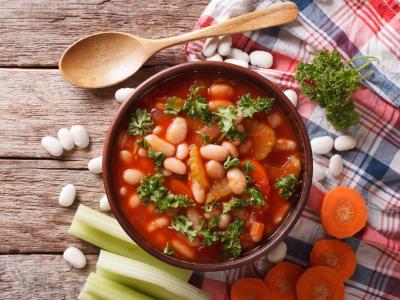 Often called Greek’s national dish, Fasolada is a white bean soup with lots of vegetables and extra virgin olive oil. It seems there are two versions – one with tomatoes and one with lemon. No matter which one you choose, this soup is comfort food personiﬁed. Try this red version on the Oldways site, thanks to one of our Mediterranean Foods Alliance members, the North American Olive Oil Association.  Greek cookbook author Aglaia Kremezi says she and her husband Costas love to eat fassolàda with feta cheese, and also with sardines in olive oil or any smoked ﬁsh.

We’ve been in love with Red Lentil Soup since Oldways ﬁrst traveled to Turkey in 1993 for our ﬁrst Symposium in Istanbul.  Since then, we’ve had the opportunity to try this luscious soup during our many Oldways Culinarias in Turkey with Chef Ana Sortun. Ana reported in the Wall Street Journal that she makes this soup almost every other week, and sometimes enjoys it for breakfast as it’s a good protein and keeps her full for a while.  The recipe is adaptable, using diﬀerent seasonal vegetables throughout the year.  Cookbook author and New York Times food writer Melissa Clark also has a version of this delicious soup that is quick and easy. 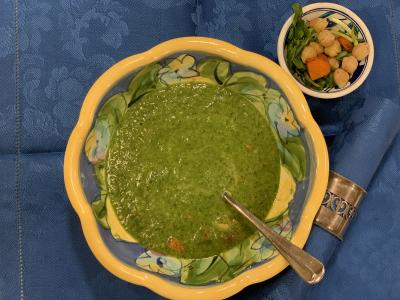 For Israel, we looked to the beautiful cookbook, Jerusalem, by Yottom Ottolenghi and Sami Tamimi, and have adapted their Watercress and Chickpea Soup with ras el hanout. They explain that “ras el hanout is a spice blend brought to Jerusalem by North African Jews and consists of sweet and hot spices, toasted and ground.” Chickpeas play a big role in Israeli and Palestinian cuisine; you need only to think of hummus and falafel to conﬁrm that. The Real Food Encyclopedia says this of chickpeas, “Chickpeas, or garbanzo beans, play an important role in many cultures of the Mediterranean, Middle East and Africa, including Spain, Italy, Lebanon, Israel, Morocco and Ethiopia (to name just a few).”  In addition to their versatility and nutrition (high in protein and ﬁber, among other nutrients), chickpeas are nitrogen producers and therefore can improve soil fertility.  When you try this soup, be sure to take the advice of Ottolenghi and Tamimi, “if your ras el hanout doesn’t contain cinnamon, make sure you add some as we do here.”

When you say Moroccan food, Paula Wolfert comes to mind immediately. She writes in her legendary book, Couscous and Other Good Food from Morocco, “In Morocco soup is usually a supper dish, heavy and well spiced, nourishing and rich. I have known people who lived on nothing but Harira soup while visiting Morocco. Harira, of course is famous as the food eaten at sundown each day during the fasting month of Ramadan.  But Moroccans eat it throughout the year. Paula describes Harira as peppery and lemony, rich with vegetables and meat, thickened with tedouira, a a mixture of yeast or ﬂour and water. It is always reddened with tomatoes and sometimes enriched with beaten eggs. 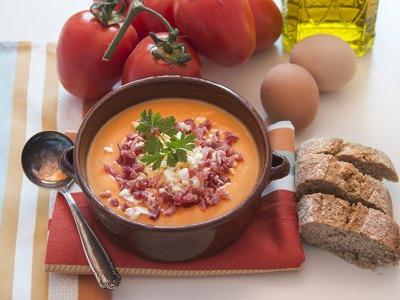 Although tomatoes are not in season in the U.S. in February, we can’t resist suggesting Salmorejo and Gazpacho as Spain’s representative soups.  Both soups hail from southern Spain, the region of Andalusia, and feature tomatoes, which were ﬁrst grown in Spain in Andalusia, near Seville.  Both recipes also include olive oil, sherry vinegar, and bread, although there is more bread in Salmorejo than Gazpacho.  Gazpacho also includes peppers, onions and cucumbers.  Our recipe for Salmorejo was adapted from cookbook author Claudia Roden’s book, The Food of Spain.  We also adapted Claudia’s recipe for Gazpacho, but from her earlier groundbreaking book, Mediterranean Cookery. We love Claudia’s comment that “if gazpacho is like a liquid salad, salmorejo is like a liquid sandwich — though it eats like a refreshing cold soup.” 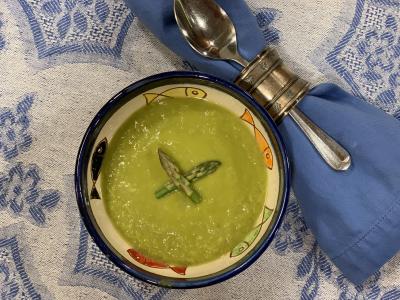 Although Provence, the Mediterranean region of France, oﬀers comfort food in a bowl via Provencal Soup with Pistou (the Provencal version of Minestrone) we’ve chosen our adaptation of legendary cookbook author and Provencal cooking teacher Patricia Wells’ easy recipe for Spring Asparagus Soup. With a hopeful eye toward spring, asparagus is sure to be found in our kitchen, and if Patricia recommends this soup, it is sure to be a winner.  If you do want to try Provencal Vegetable Soup with Pistou, here’s a recipe from Cookbook author and New York Times City Kitchen columnist David Tanis.
Portugal

Caldo Verde (green soup) is undoubtedly one of the most renowned and cherished dishes of Portugal. In fact, in 2011, a national contest deemed caldo verde one of the ‘seven wonders of Portuguese gastronomy.’  Caldo verde is a nourishing, thick and hearty soup made with a puree of potatoes and onions and ﬁnely-shredded collard greens and a touch of olive oil. It’s served with spicy smoked sausage (known as chouriço) and a slice of corn bread. Tradition dictates that caldo verde is the best companion for an evening of listening to Fado (a traditional expressive and melancholic style of music you’ll ﬁnd in Portuguese pubs and cafes).  To make your own, try this version of caldo verde from Chef Steven Petusevsky, who sent this to us in 2019, when he had recently returned from visiting Portugal and had this incredible soup wherever he went. He said, it is clearly the beloved soup of the entire country. 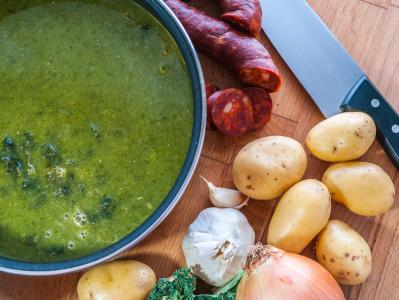 Pleasing and friendly, Mediterranean soups oﬀer delicious comfort, ease and great nutrition.  As Rosie Schwartz, Canadian dietitian and author of The Enlightened Eater’s™ Whole Foods Guide : Harvest the Power of Phyto Foods, puts it, “When I ask my clients about soup-making, I often get the same answer: “I don’t know how to make soup. I’ve never done it.” That’s when I turn to the Mediterranean to show them how easy it is.”

To put the call (base every meal with these plant foods!) into action, try the Mediterranean soup recipe links above, or any of the recipes we’ve included below.  You can’t go wrong!   Delicious, easy and satisfying.