How You Can Join the Urban Homesteading Movement

When it comes to the “old ways,” you can’t get much closer to traditional practices than with the DIY preparation and preservation techniques of homesteading. The homesteading movement is centered on self-suﬃciency, which can be traced back to the beginning of any cultural diet. On Saturday, February 18, people in Boston will have the opportunity to learn the art of many homesteading techniques at the Urban Homesteading Festival, held at The KITCHEN in The Boston Public Market, which is operated by The Trustees.

Learn more about the history of homesteading, and ﬁnd out what the festival has in store below. Can’t make it to the festival? Don’t worry — we’re also sharing seven easy ways to try out homesteading on your own (at the bottom of the page).

In the United States, the homesteading movement has evolved throughout history. It derives its name from the Homestead Act of 1862, which granted federal land to citizens in an eﬀort to encourage expansion westward. Applicants paid a small fee and then agreed to live on and work the land for ﬁve years, after which they received an ownership title for it. A century later, homesteading was synonymous with the “back-to-the-land” counterculture of the 1960s. Today, it is a smaller-scale social movement that encourages self-subsistence and DIY food and agricultural practices as a response to large-scale production methods, and to reduce waste and increase sustainability.

Making and preserving your own food is a return to the “old ways” that we are very fond of. However, you don’t need to go west or buy your own farm to be a homesteader. It can be as simple as growing heirloom vegetables or fermenting your own sauerkraut. No matter what you choose to make, homesteading is a way to enjoy local, seasonal ﬂavors and preserve them traditionally while avoiding the high levels of salt and sugar in processed foods common in the standard American diet. 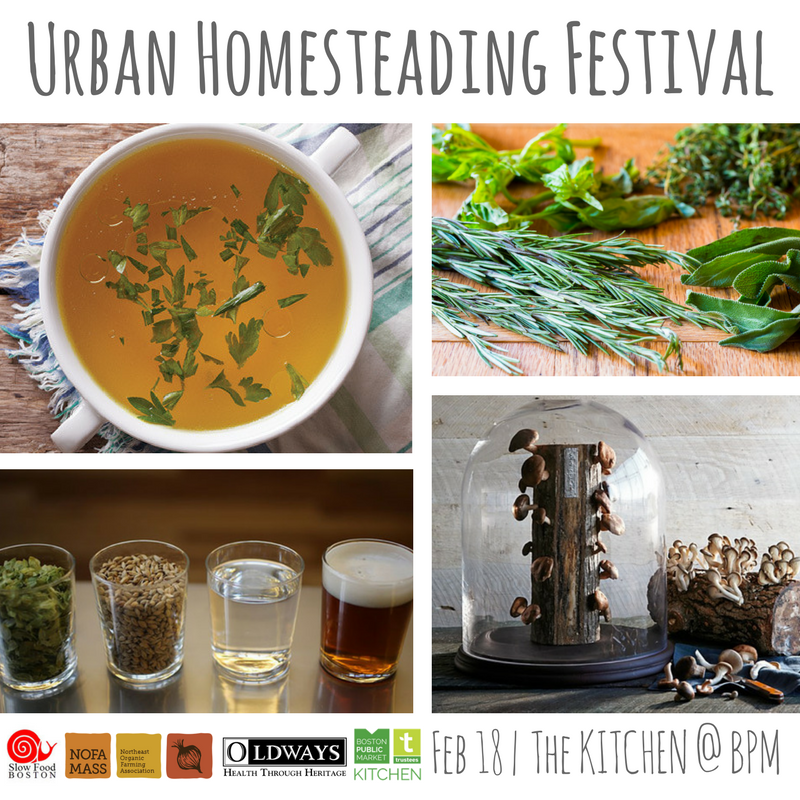 Between the winter weather and the ongoing bustle of the work week, you might wonder how to be a homesteader in an urban environment like Boston. Fortunately, the Urban Homesteading Festival will teach you how to bring the traditionally rural homesteading lifestyle to the city. The festival will be held Saturday, February 18, and presented in partnership by The Trustees of Reservations, The Northeast Organic Farming Association, Slow Food Boston, and Oldways.

“Our intended audience is people who may have thought about homesteading but feel that they couldn’t do it in the city, whether it’s due to a lack of space or not being sure how to get started,” said Sarah Moser, engagement site manager with The Trustees. ”This is for the beginner or intermediate homesteader, but it’s not just a series of theoretical workshops. It will be a hands-on, technical dive into things you can do in your own home.”

The festival is just one of several events hosted at The KITCHEN that encourage a return to traditional ways of cooking, preserving, and preparing food, which aligns with Oldways’ mission.

The idea for the festival spawned from The KITCHEN’s existing harvest workshop series, which focuses on the preservation of a single, seasonal ingredient, such as tomatoes in August or pumpkins in October.

“We thought it would be cool to dig deeper into making and preserving traditional foods yourself with a focus on recent trends like bone broth and brewing beer,” said Moser. “We also wanted to emphasize seasonality and what you can buy locally at this moment, so while this winter festival focuses on cheese, beer, and herbs that can be grown inside, topics at a summer festival might be diﬀerent.”

The classes will be taught by instructors from several local vendors that will be familiar to patrons of the Boston Public Market, such as Aeronaut Brewery and Soluna Garden Farm. Following the workshops, attendees can mingle at a cocktail hour sponsored by Slow Food Boston.

Get full details and purchase your ticket here today — and use PARTNER30 for discounted tickets. 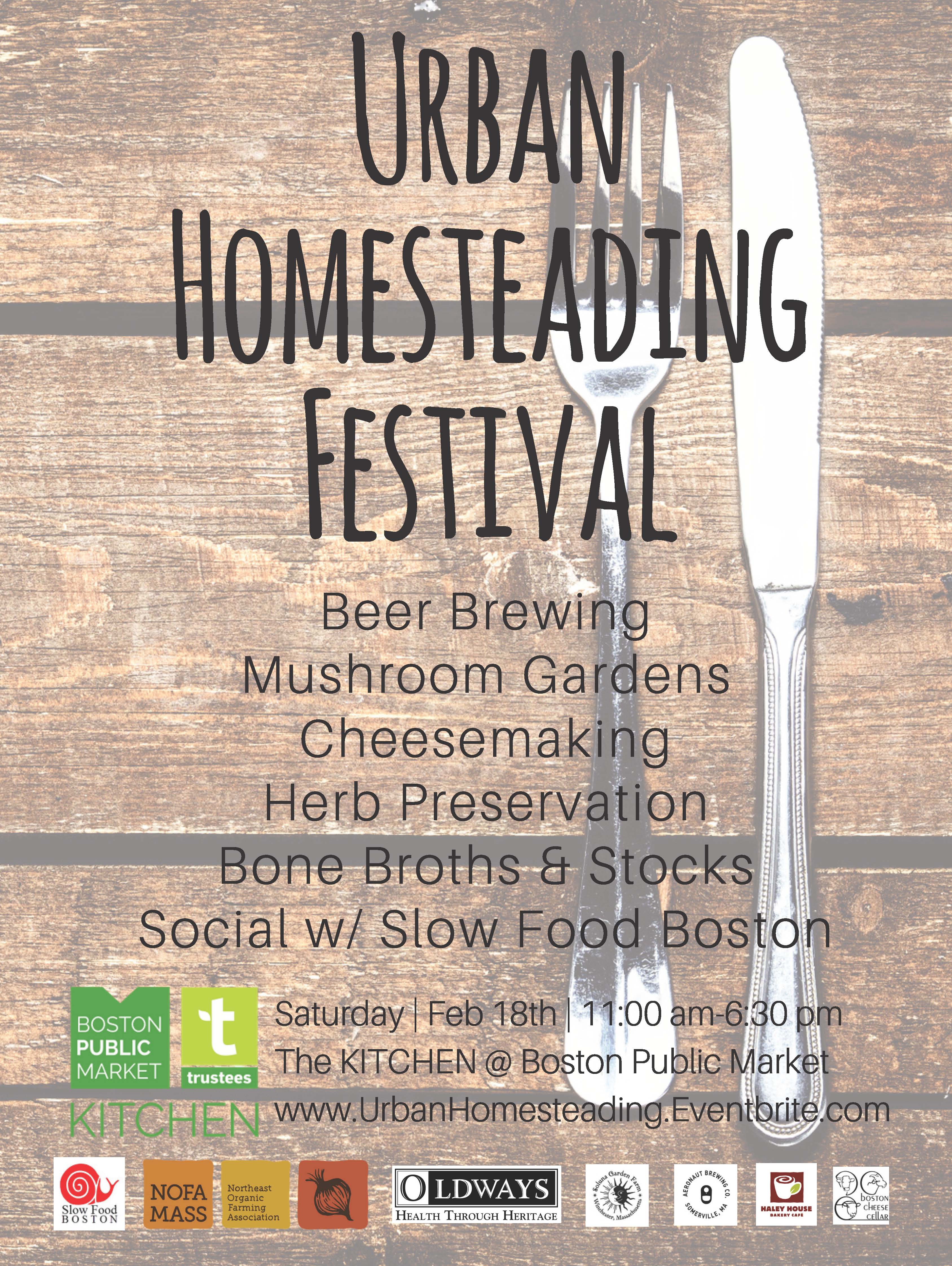 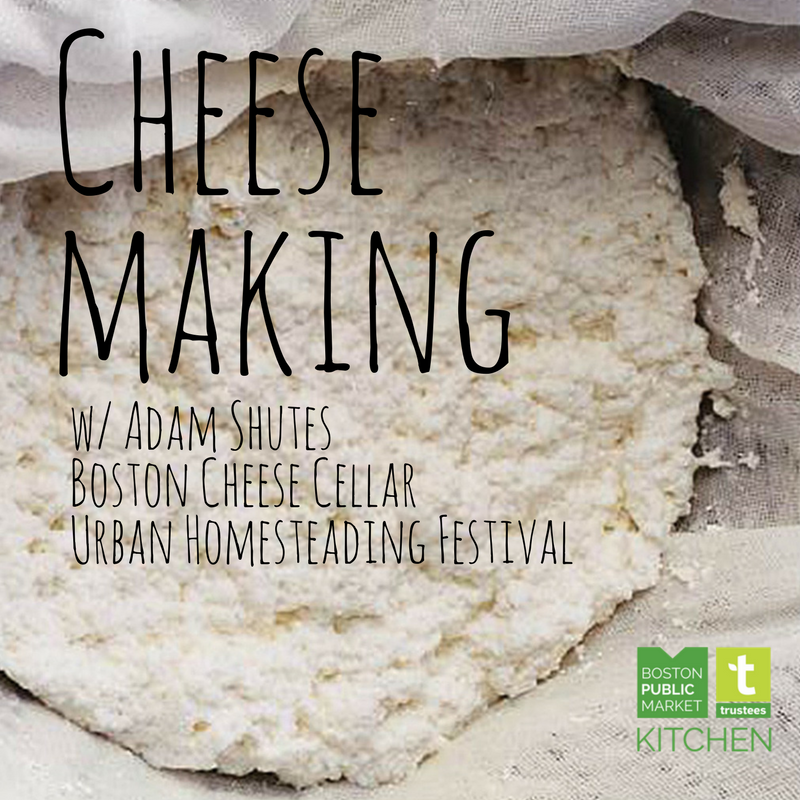 If you can’t make it to the festival on Saturday, try some of these tips to incorporate elements of homesteading into your lifestyle: