Cozy Up with Hearty Soups Inspired by the Flavors of Portugal

With the Oldways culinary tour to Portugal on the horizon in April 2022, it’s time to put a spotlight on the soups of Portugal. When we traveled to Lisbon and Porto for a planning trip, we heard from everyone we met that soup with vegetables was an integral part of everyday dining. 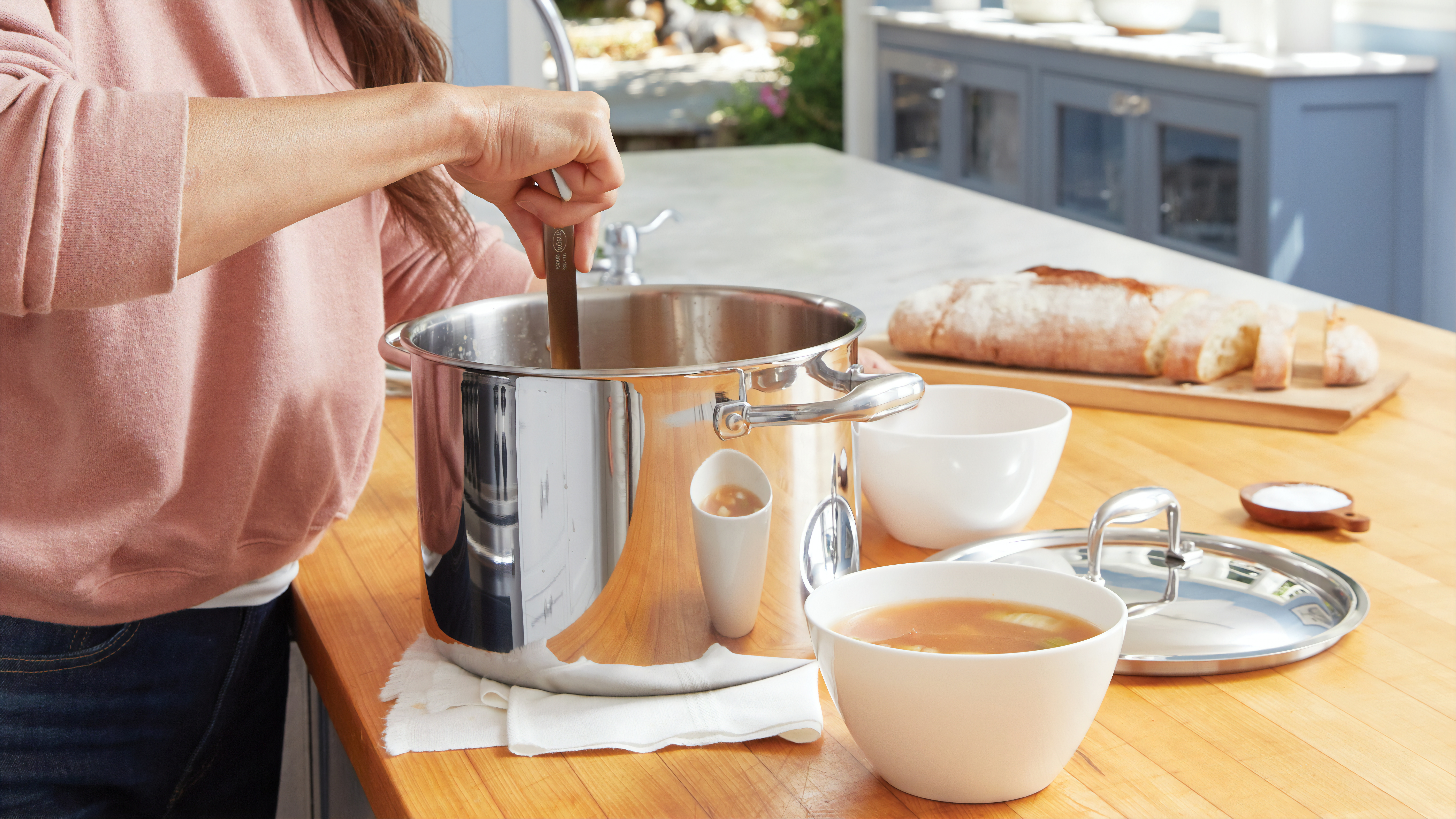 Like countries in and around the Mediterranean, Portuguese cuisine has generally focused on straightforward cooking techniques that highlight the local bounty. Behold the simple beauty of a pot of soup. Toss a handful of ordinary ingredients into a pot, let it simmer away (developing ﬂavor along the way), and the end result is a meal greater than the sum of its parts. Hearty, homey, nourishing, warming, comforting and inexpensive—there’s no shortage of adjectives to characterize Portuguese soups tailor-made for cozying up with on a chilly winter day.

The Dietary Guidelines for Americans recommend that most adults eat 2-3 cups of vegetables daily. In the frigid winter months, when hot and hearty dishes sound more comforting than a chilled salad, vegetable soups are a great way to meet your daily vegetable recommendations. What’s more, vegetables tend to shrink when cooked, making it easy to enjoy more vegetable goodness in one small bowl.

Caldo Verde (green soup) is undoubtedly one of the most renowned and cherished dishes of Portugal. In fact, in 2011, a national contest deemed caldo verde one of the ‘seven wonders of Portuguese gastronomy.’  Caldo verde is a nourishing, thick and hearty soup made with a puree of potatoes and onions and ﬁnely-shredded collard greens and a touch of olive oil. It’s served with spicy smoked sausage (known as chouriço) and a slice of corn bread. Tradition dictates that caldo verde is the best companion for an evening of listening to Fado (a traditional expressive and melancholic style of music you’ll ﬁnd in Portuguese pubs and cafes). 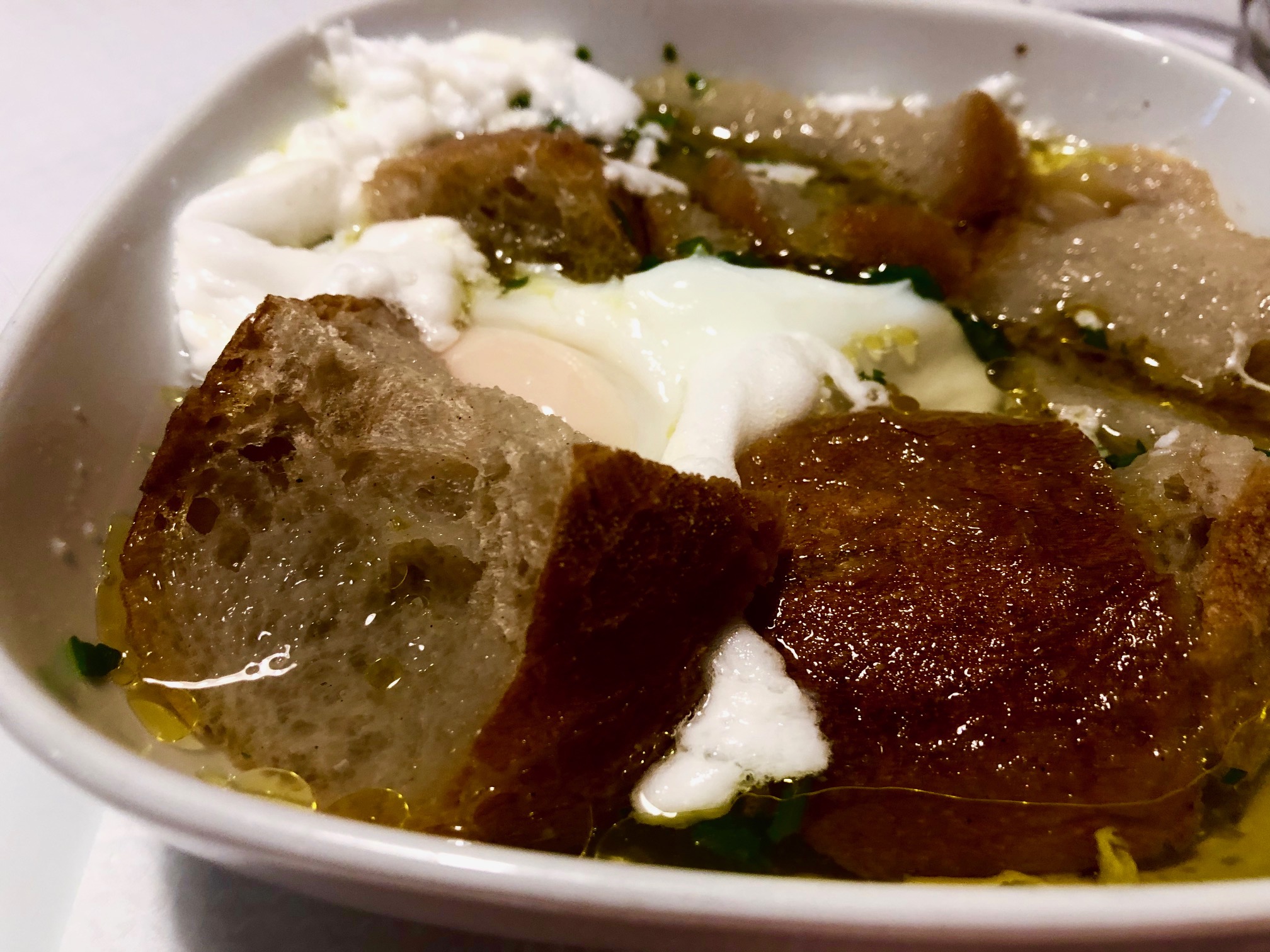 A bowl of Sopa Alentejana

Açorda or sopa Alentejana (Portuguese bread soup) is a stick-to-your-bones, peasant soup from the Alentejo (a large region south of Lisbon). It originated as a means of using up stale bread. Açorda consists of slices of crusty bread that are drizzled with olive oil and then soaked in boiling water infused with garlic, salt, and cilantro. Poached eggs are placed on top of the bread just before serving.

Sopa de cação is another customary soup from the Alentejo region. A green soup, which gets its color from plenty of cilantro, plus garlic, bay leaves, paprika, vinegar, and a white meaty ﬁsh. The soup is typically served over sliced bread, which thickens the soup.

When the mercury drops, few things are more comforting than a good old-fashioned bowl of chicken soup, referred to as canja de galinha in Portugal. Depending on the region and tradition, this soup is usually made with rice or short cut pasta and sometimes thickened with beaten egg yolks and seasoned with lemon juice, chopped parsley, or mint leaves.

Sopade Tomate (tomato soup) is a long-established favorite. The Portuguese version takes it to another level by combining the tomatoes with smoky bacon and chouriço and serving it with poached eggs on top.

Originating in Algarve (southern Portugal) and perhaps more of a stew than a soup, cataplana is a time-honored ﬁsh and/or seafood stew. Cataplana gets its name from the copper pan in which it’s cooked—that is, two rounded copper sides connected by a hinge that opens and closes like a clam. It’s a memorable dish highlighting the best of what this region has to oﬀer, an abundance of ﬁsh/seafood and fresh vegetables. Onions, garlic, and tomatoes are stewed with glugs of white wine, clams, whole prawns, ﬁsh, mussels, octopus, and slices of chourico. Every restaurant owner and home cook has their own version, so best to sample an assortment if you ﬁnd yourself exploring the south of Portugal.

Sopa da pedra (stone soup) is a humble Portuguese soup made from kidney beans, pork sausage, bacon, potatoes, cabbage, onions, carrots and garlic. It originates from the city of Almeirim, north of Lisbon. It’s served piping hot and is accompanied by its own legend. According to Portuguese folklore,

“A hungry friar begging for food knocked at the door of a farm laborer’s house. When the laborer tried to turn him away, the friar picked up a stone and asked him to lend him a pot and some water so that he could make a delicious stone soup. The laborer and his family agreed. As the water boiled, the friar remarked that the soup would improve considerably if they gave him some lard, which they also provided. Tasting the soup at various intervals, the friar was able to obtain salt, cabbage and a morsel of smoked sausage, everything he needed to make his wholesome soup. When he had eaten it, only the stone remained at the bottom of the pot.”

The parable is still told today and underscores a distinct moral—the importance of generosity and nourishing loved ones, friends, and strangers alike.

Soup is, of course, not the only feature of Portuguese cuisine, but it’s central Portugual’s culinary identity. In fact, Chef John DaSilva, the chef traveling with us in Portugal, recalls that his love of soup was something he learned from his grandmother who immigrated to Massachusetts from Portugal.

Debra Negrin
I am interested in joining the Make Every Day Mediterranean Club. I’ll go on FB and join the group. I ❤️ your emails. Thank you!
Hannah-Oldways
Thanks Debra! Welcome to the group!
Nellie
Hi, I love your weekly newsletter, how can I be part of the make every day mediterranean club if not on facebook? Thank you
Hannah-Oldways
Hi Nellie! We're so glad you're enjoying the newsletter, and we'd love for you to join the Make Every Day Mediterranean Club. However, the club is a Facebook group, so you do need to have a Facebook to participate. Perhaps that is something you might consider!