Rosie Schwartz Takes a Stroll Down Mediterranean Memory Lane I’ve been given one of the toughest tasks I can recall. For the celebration of Mediterranean Diet Month, I was asked to share my favorite Mediterranean inspired memory.  My favorite?  I can say that it was on one of Oldways’ Symposiums where delegates were immersed in the best that the Mediterranean had to offer.

I’ve been given one of the toughest tasks I can recall. For the celebration of Mediterranean Diet Month, I was asked to share my favorite Mediterranean inspired memory.  My favorite?  I can say that it was on one of Oldways’ Symposiums where delegates were immersed in the best that the Mediterranean had to oﬀer.

Just as the Mediterranean diet is not about a single food but is about an entire style of eating, Oldways Symposiums surrounded us with everything Mediterranean – the food and wine, the lifestyle and the people and camaraderie.  Dun and Sara and the Oldways family gave me memories that I will forever cherish.

Because I have so many memories of diﬀerent Oldways’ trips while it has been diﬃcult to choose, this undertaking has also been incredibly pleasurable as it has reminded me of numerous extraordinary symposiums:

-Lunch inside a winery in Puglia which was originally supposed to be a picnic but was rained out.  It was the ﬁrst time I had ever tasted zucchini blossoms -freshly picked ones fried in olive oil. Unbelievable!

-Dinner in Pisciotta, a ﬁshing village south of the Amalﬁ Coast where alici – anchovies – is all that is caught. And it was what we dined on, course after course of amazing dishes made with anchovies including alici Parmigiana.

-Having the chef of the late Ancel Key’s, the scientist who discovered the secrets of the Mediterranean diet, cook for our group.

- In the courtyard of a southern Italian castle in Puglia, the fast paced music of the tarantella and Oldways delegates together with locals dancing faster and faster than I thought was possible.

-Tasting diﬀerent types of goat cheese from the Cilento mountains of Campagna while being tutored as to the diﬀerent ﬂavors depending on which side of the mountain the goats had grazed.

-Learning about balsamico in Emilia Romagna, from the process of how the real deal, aceto balsamico tradizionale, is made to the traditions surrounding the giving of sets of barrels to young couple when they marry.

- As a dietitian, listening to and talking one-on-one to renowned scientists discussing various attributes of the Mediterranean diet. From Harvard researchers to scientists such as Dr. David Jenkins and Dr. Jennie Brand-Miller, the world’s two top experts on the glycemic index, discussing the beneﬁts of pasta. 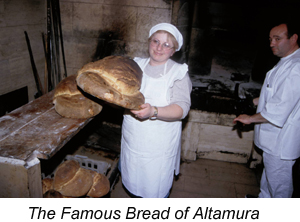 But one memory does stand out above all the rest. It was supposed to be a buﬀet lunch in the town of Altamura in Puglia, which is known for producing the best bread in Italy.

As our group walked to the central square, we were unprepared for what was ahead. What seemed like the entire town- and likely was – was there waiting to welcome us, complete with a band playing music. Every balcony in the square was ﬁlled with people looking down while other locals packed every spot on the ground.

Numerous long tables were ﬁlled with food- Altamura’s famous breads and focaccias, all manner of incredible vegetables and salads, cheeses including the heavenly burrata and wine.

A group of us staked out a place on some stairs to a balcony and then we took turns getting food.  I was responsible for getting the focaccia – it was more like a ﬂatbread or pizza than the typical focaccia. As I squirmed my way to our spot, carrying plates ﬁlled with a variety of slices, a tall policewoman laughed as she helped herself to a slice. It was a festive gathering like none other I had ever experienced before or since.

For many of us, back in the late 1990s, it was our ﬁrst taste of artisanal bread. The bar for bread had indeed been set very high.  And just as Oldways did with every aspect of their symposiums, we learned about the unique characteristics of Altamura’s prized goods and witnessed the bread making from start to ﬁnish.

As I read about new research linking the Mediterranean diet to an array of disease-ﬁghting beneﬁts, I smile as I think of my Med memories.