Rosie Schwartz, RD Rosie is a Toronto-based consulting dietitian and writer and is author of The Enlightened Eater's Whole Foods Guide (Penguin USA). Her new blog is launching soon but for now you can like her on Facebook for details and say hello to her on Twitter @RosieSchwartz.

An Enlightened Eater’s Guide to the Mediterranean Diet

Rosie Schwartz, RD
Rosie is a Toronto-based consulting dietitian and writer and is author of The Enlightened Eater’s Whole Foods Guide (Penguin USA). Her new blog is launching soon but for now you can like her on Facebook for details and say hello to her on Twitter @RosieSchwartz.

The Mediterranean Diet may indeed be centuries old, but it was Oldways who reclaimed it and put it back on the map and onto the dinner plates of North Americans.  As a dietitian, I was familiar with the research of Ancel Keys, the American scientist who touted the beneﬁts of the Mediterranean Diet back in the early 1970s.  But more than a decade later, only a few dozen studies had investigated the health beneﬁts of this traditional eating pattern. It was even disappearing from the tables of its origin.

Then Oldways and the late K. Dun Giﬀord came along. Together with Sara Baer-Sinnott, Dun introduced the scientiﬁc and culinary world to the wonders of the Mediterranean Diet.  Since their introduction of the ﬁrst Mediterranan Diet Pyramid back in 1993, thousands of scientiﬁc studies showing the diverse range of health beneﬁts have been published. It has since become the gold standard of healthy eating.

At the same time, Dun and Sara introduced the culinary world to the pleasures of eating in the Mediterranean style. Oldways’ symposiums throughout the Mediterranean region were nothing less than spectacular.  It was on one such symposium in Morocco where I ﬁrst met Dun and Sara.  We traveled the land, learned about the culture and tasted all manner of local fare.  Chefs of the region worked together with the delegate chefs to introduce us to the ﬂavors of that North African country.  Their creations then appeared on menus of leading eateries right across North America.

I also traveled to other parts of the Mediterranean with Dun and Sara and witnessed their passion and respect for the traditional food patterns.  In Morocco, we sampled authentic couscous, while in Puglia, we tasted the diﬀerent ﬂavors of olive oil produced from assorted olive varieties, a totally new concept to me at the time. It was an education like none other.

What I ﬁnd to be amazing is how science is now demonstrating the wisdom of the ages. For example, Israeli research assessed the antioxidant power of individual ingredients such as extra virgin olive oil, garlic, tomatoes and basil and found that when combined, the eﬀects are synergistic — meaning that the total antioxidant power is signiﬁcantly more when these foods are consumed together than when each is eaten on its own.

Here’s a yummy yet simple recipe, adapted from my book The Enlightened Eater’s Whole Foods Guide (Penguin USA), that combines all these ingredients.  You can use this preparation to oven dry any type of tomatoes, even grape or cherry varieties, all year long. Simply shorten cooking times if the tomatoes are small. When you have too many tomatoes or some that are getting too ripe, extend their shelf life by drying them.  Roasting them in the oven makes them sweeter while providing an intense hit of ﬂavor. 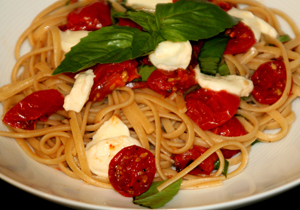 Cut tomatoes into wedges (quarters for small tomatoes and sixths for larger ones) and place on the baking sheet, skin side down.  Drizzle 1 tablespoon olive oil over tomatoes and season with salt and pepper.

Bake for about 1 ½ hours to 2 hours, or until tomatoes are dried slightly but still soft to touch. Be careful not to overdry.

To prepare garlic, cut oﬀ ¼ inch oﬀ the top of  the cloves. Drizzle with 1 teaspoon olive oil and wrap in double thickness aluminum foil. Place in oven alongside tomatoes and bake for about 30 minutes. Remove from oven and allow to cool. Squeeze roasted garlic into a small bowl. Using a fork, mash it together with 2 teaspoons olive oil.

Remove tomatoes from oven and allow to cool; cut tomatoes into ½ inch pieces. Set aside.