Sicily is the largest island in the Mediterranean, just oﬀ the ‘toe’ of Italy’s boot. It has an inherent beauty to it—a bit rustic and rough around the edges, with hidden gems, an expansive coastline (with the Tyrrehenian Sea to the north, the Ionian Sea to the east, and the Mediterranean Sea to the south), lush volcanic soil (including some active volcanoes—Mt. Etna and Stromboli), Baroque architecture and ancient ruins. 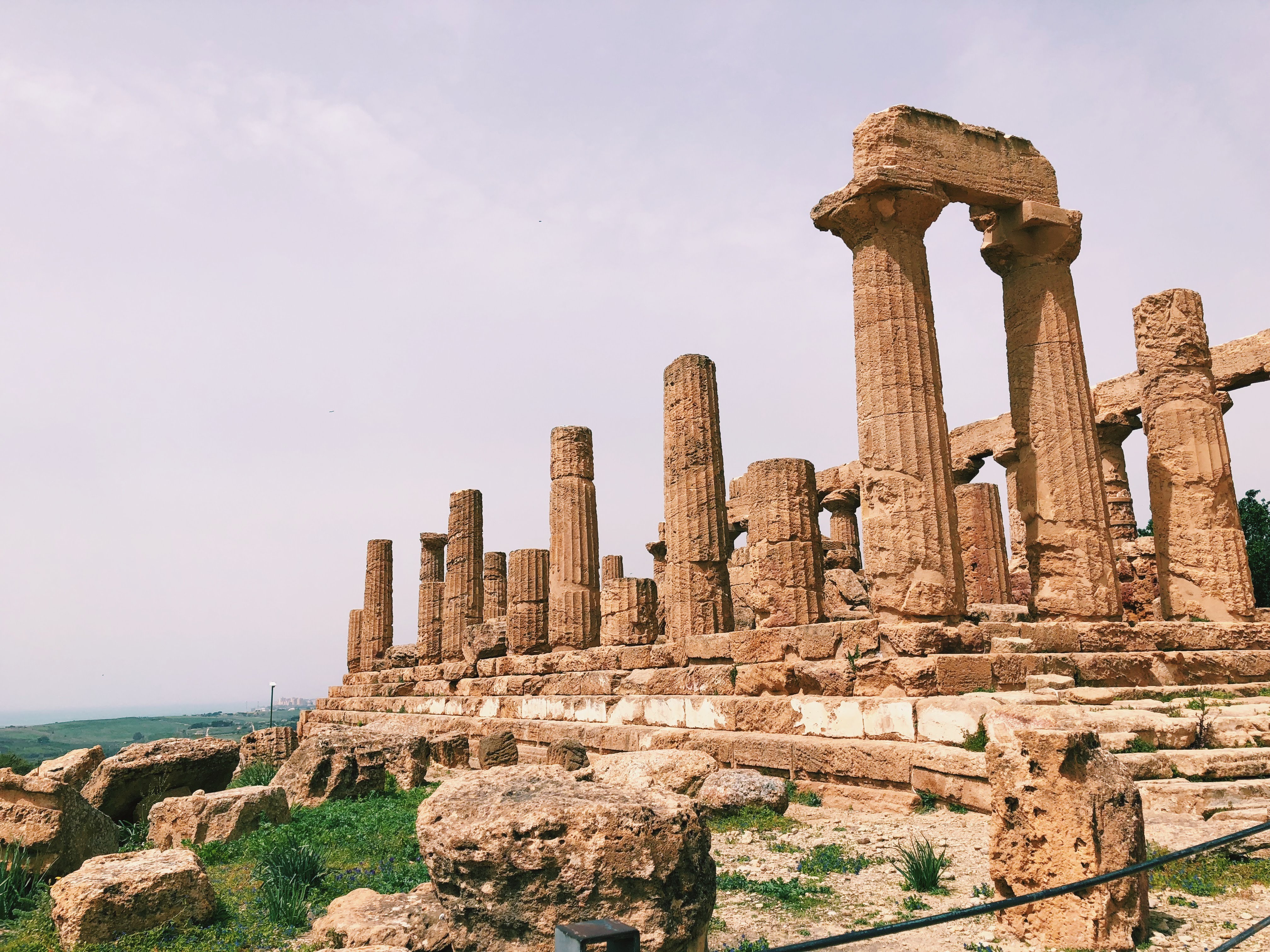 Well-preserved Greek temples​ at Agrigento, a historical site in Sicily

Sicily has the Greeks to thank for bringing olives, grapes, honey, and fava beans. The Romans, who followed, introduced wheat and other grains. The Arabs made the most remarkable contributions, largely through advanced agricultural techniques, such as irrigation, as well as by introducing a plethora of crops such as apricots, citrus, eggplant, couscous, raisins, nuts (e.g., almonds and pistachios), rice, sugarcane, and spices (e.g.,  cinnamon, saﬀron and nutmeg).

You’ll ﬁnd the freshest ﬁsh and seafood along the coast, where hard-working ﬁshmongers boast about their catch of the day (by the way, the ﬁsh market in Catania is an experience not to be missed.) These catches include swordﬁsh (pesce spada), tuna (tonno), sea bass (spigola), gold bream (orata), squid (calamari), octopus (polpo), prawns (gamberi), scabbard ﬁsh (spatula), clams (vongole), mussels (cozze), sardines (sarde) and anchovies (acciughe). In the hills and mountains, you’ll encounter an assortment of cheeses (formaggi), sausages (salsiccia) and mushrooms (funghi). And all across the island you’ll enjoy stellar produce (largely in thanks to Sicily’s rich, volcanic soil) such as tomatoes (pomodori), eggplant (melanzane), courgettes (zucchini), olives (olivi), capers (capperi), garlic (aglio), broad beans (fave), chickpeas (ceci), aromatic herbs, wine (vino) and many other varieties of fruits, vegetables, and legumes. 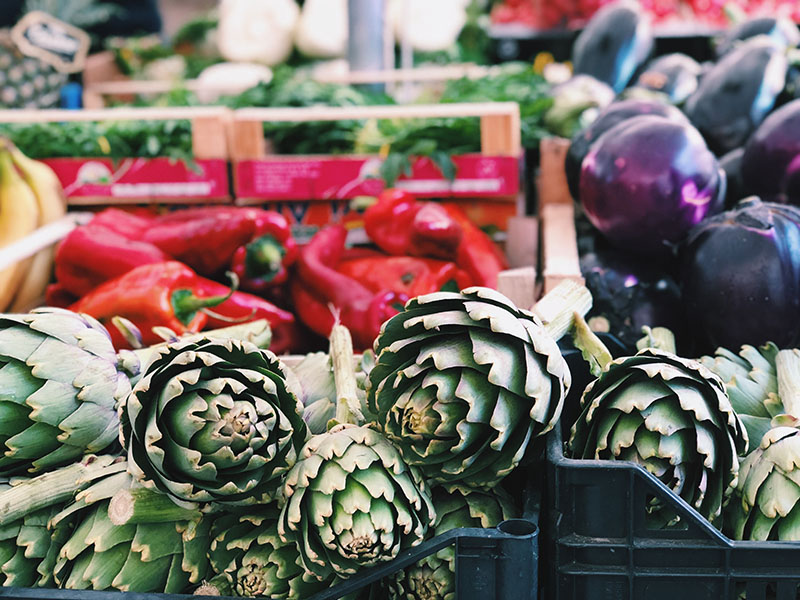 The breadth of ingredients introduced by various peoples who at one point or another called Sicily “home.” On the whole, Sicilian cooking is at the heart of the Mediterranean Diet. In fact, many of its best-known dishes are vegetarian.

In Palermo, the capital of Sicily, you’ll ﬁnd a rich street food culture. Panelle, small, ﬂat, fried chickpea fritters, are one of Palermo’s most popular street foods, sold in friggitoria (fry shops) all over the city. Another popular Sicilian street food is arancini, small, saﬀron-colored rice balls stuﬀed with various ﬁllings such as mozzarella or a ragu of tomato, meat and peas, then dredged in breadcrumbs and deep fried until golden brown.

You might start oﬀ a meal with a simple Sicilian orange and fennel salad called insalata di arance.

Eggplant is amongst the most popular of vegetables in Sicily and you’ll ﬁnd it in various preparations. Caponata is a typical antipasto that you’ll encounter in every corner of Sicily; a delicious sweet and sour (agrodolce) mixture of fried eggplant, onions, celery, tomatoes, vinegar, capers, and olives, sweetened with a bit of sugar. You’ll also see various types of involtini, a small bundle or parcel consisting of some sort of outer layer (vegetables, meat, poultry, and seafood) wrapped around a ﬁlling (cheese, vegetables, cured meats, and nuts). For instance, eggplant involtini are baked eggplant rolled around dollops of ricotta cheese and bathed in marinara sauce. Swordﬁsh involtini are stuﬀed with breadcrumbs, currants, garlic, parsley, and pine nuts. 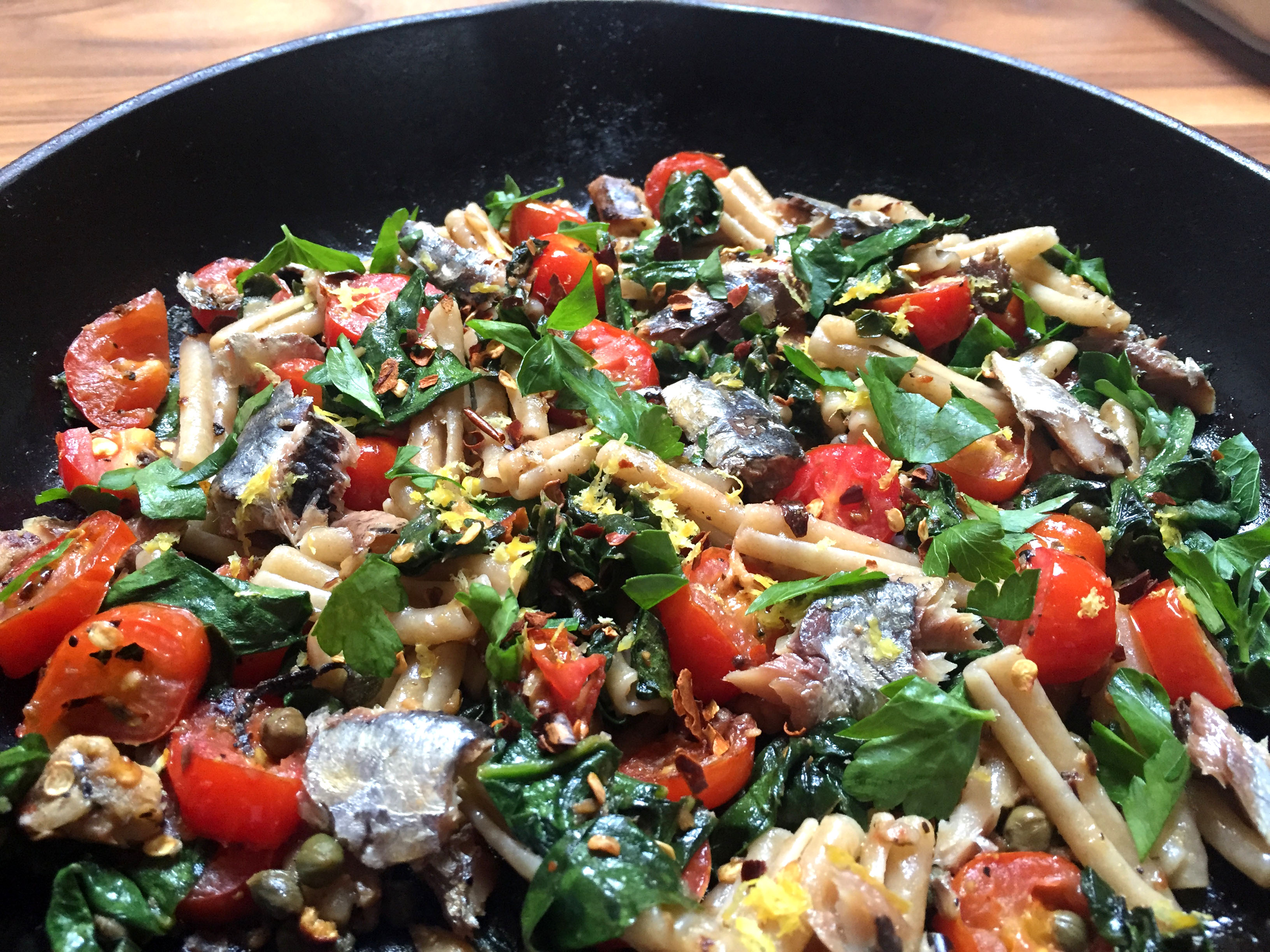 In Sicily, there is seemingly a pasta dish for each day of the year. Pasta is typically served as a primo piatto (ﬁrst course). A trip to Sicily is not complete without sampling pasta con le sarde y ﬁnocchietto, or pasta with sardines and wild fennel. Pasta, typically bucatini (a spaghetti-like pasta with a hole in the middle, like a straw) is paired with a combination of salty sardines and anchovies, pine nuts, and sweet currants to yield that classic Sicilian salty-sweet ﬂavor proﬁle. Pasta alla Norma is another traditional pasta dish of eggplant, fresh tomatoes, garlic and basil, topped with ricotta salata. Busiate al pesto trapanese is a typical pasta from Trapini, a seaside town on Sicily’s west coast. Instead of your classic basil pesto, this pesto is comprised of fresh tomatoes, almonds, garlic, and basil and usually served with busiate, a long and twisty fresh pasta from the area. Couscous alla trapanese is another typical dish of Trapani and showcases the Arab inﬂuences on the island’s cuisine. The couscous is typically prepared with shrimp or mussels and a white ﬁsh such as snapper, bream, or sea bass.

If you have a bit of a sweet tooth, you’ll deﬁnitely want to sample the local granita. Granita is a semi-frozen dessert made from sugar, water and various ﬂavorings. It originated in the town of Acireale, on Sicily’s eastern coast, where you can still ﬁnd excellent examples of it at various cafes. Granita has a diﬀerent ﬂavor and consistency as compared to Italian ice you ﬁnd in the United States. Flavors like almond, pistachio (the best pistachios come from Bronte, grown in the volcanic soil of Mount Etna) and dark chocolate have an utterly creamy consistency, despite being dairy-free.

Sicilian-inspired recipes are the perfect place to turn when looking for a hearty, ﬂavorful meal that also happens to be ﬁlled with healthy Mediterranean ingredients. Sicilian pasta meals feature vegetables, as well as other unexpected ingredients thatthe  Dietary Guidelines recommend we eat more of, such as nuts and seafood. Even the desserts can oﬀer a vitamin and mineral punch—watermelon granita, ﬂavored primarily with fruit and only a few spoonfuls of sugar, is one of our favorite sweet-treats to end a meal with—simply divine!

George
Olives red wine vegetables want else?
Lindapersichini
I would love to try this diet to a better healthier life style and living.