Raw-Milk Cheese Appreciation Day is this Saturday! What Are You Doing to Celebrate?!

I recently had the great fortune of joining the Skinny Beet podcast to chat cheese fundamentals and to talk about my own plans to celebrate Raw-Milk Cheese Appreciation Day. I’m hosting an afternoon potluck party and have invited several of my closest friends to bring along their favorite raw-milk cheese recipe (and I hope they choose one from my favorites list of Delectable Dishes: Recipes with Raw-Milk Cheese). Rather than a cooked dish, for my contribution I plan on keeping it simple with just the sort of composed cheese plate that I shared with Richard, Katie, Dylan and Rachel on the podcast. 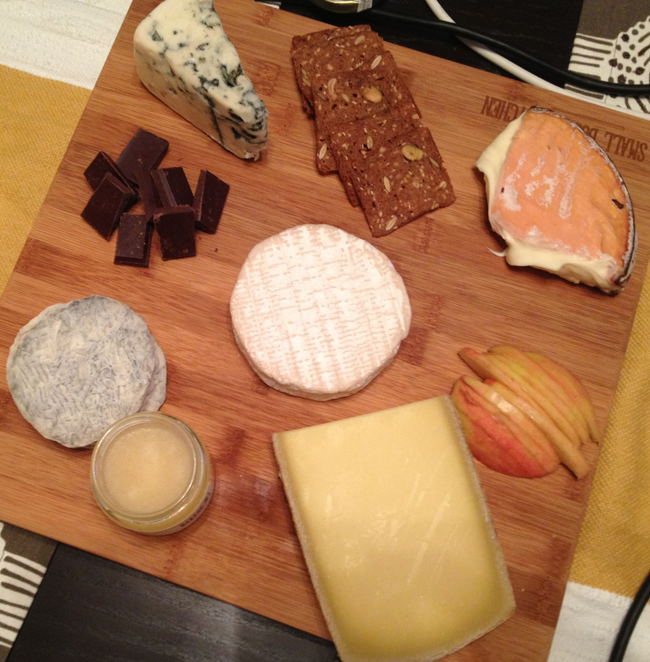 I recently had the great fortune of joining the Skinny Beet podcast to chat cheese fundamentals and to talk about my own plans to celebrate Raw-Milk Cheese Appreciation Day.

I’m hosting an afternoon potluck party and have invited several of my closest friends to bring along their favorite raw-milk cheese recipe (and I hope they choose one from my favorites list of Delectable Dishes: Recipes with Raw-Milk Cheese).

Rather than a cooked dish, for my contribution I plan on keeping it simple with just the sort of composed cheese plate that I shared with Richard, Katie, Dylan and Rachel on the podcast.

Putting together the perfect raw-milk cheese plate seems like a daunting task. But it really is quite simple. Luckily it’s artisan cheese, which is always delicious, so there just isn’t a wrong way to do it.  If the labor still seems herculean, just ask the friendly folks behind the counter. At any reputable cheese shop, like the hundreds listed here that are participating in the Appreciation Day celebration, there will be several expert mongers chomping at the bit to share their knowledge and passion for ﬁne fromage.

I generally select 3-5 cheeses, of various ages, textures, styles, and milk types.  I prefer wedges that have been cut directly from the wheel but in a high-traﬃc cheese shop pre-wrapped options work perfectly ﬁne.  As an appetizer, a good rule of thumb is to buy about a quarter pound per person, total. So if it’s me and my seven friends and I want 4 cheeses on the plate, a half pound of each would easily do the trick.

Once I have my selection, I ﬁnd a condiment or beverage (or both!) to compliment the cheeses. There’s no exact science to this but it plays on the principle of compliment and contrast. Tangy goat cheese? try it with sweet honey! Nutty Gruyere? Try it with a Nut Brown Ale. Spicy blue cheese? Get some dark, bitter chocolate and a sweet Sauternes dessert wine.  Again, it’s really, really tough to go wrong here.

For the Skinny Beet, I selected four cheeses and four condiments. I wanted it to be international in scope but for the domestically-produced cheeses to keep it local to New England.  Thankfully, we here in Boston don’t have to look too far for fantastic artisan cheese. This board is a great example of an easy spread with all the ﬁxin’s and none of the work. It’s sure to be a crowd pleaser.

Although it was an ostensibly a plate full of raw-milk cheeses, we started oﬀ with a pasteurized goat’s milk cheese from Vermont Creamery. A cheese plate should begin with the most subtle and lactic and work its way up to the most intense, the most pungent. So fresh or bloomy-rind goat’s milk cheeses (or even brie-style cheeses) are a great place to start. However, these cheeses tend to be very young and (teachable moment!) cannot by federal regulation be commercially sold if they are made from raw milk and are less than 60 days of age (learn more about raw-milk regulations here).  So if you want these styles, you’ll have to stick with their pasteurized version or go ahead and book a ﬂight to France.  If you have been fortunate enough to have unpasteurized “soft-ripened” cheeses, you’ll know they tend to be even more ﬂavorful, more aromatic, and in my opinion, that much more delicious.

Vermont Creamery’s Bonne Bouche is the most amazing mix of sweet, creamy and tangy. Bloomy-rind cheeses get their name from the white molds that constitute their rind. These molds are delicious and not only do they give the cheese its pristine white color, they also help to produce an interior paste that is, when ripe, gooey and decadent.  So why isn’t Bonne Bouche white? The grey exterior of this particular cheese comes from a light dusting of vegetable ash. This is an ancient cheesemaking technique for preserving fresh curds that has made its way down to us mostly for aesthetics in modernity. But it certainly does look sharp on a cheese plate. We paired it wish some honey, a classic combination.

Although some cheese styles can’t be made or sold unless they have been pasteurized, most cheeses can still be found produced from pure, raw milk. In fact, many of the world’s most famous cheeses (Le Gruyère, Parmigiano-Reggiano, Montgomery’s Cheddar, and numerous others) are required to be unpasteurized. Comté, the second cheese on our cheese plate, is great example. Produced in the Jura mountain range that separates France and Switzerland, Comté is as old and as delicious as its Swiss cousin gruyere. Always made with raw milk, Comté must also be produced within certain boundaries and from the rich and ﬂavorful milk of the Montebéliard cow. It is matured in deep underground cellars for anywhere between twelve and twenty four months. Older versions have ﬁrmer textures and a more nutty, more saline, less swissy-sweet ﬂavor proﬁle.

For our cheese plate, Comté makes for a great example of natural-rind cheese. The outside rind is nothing more than the cheese itself. However, it has been liberally rubbed with salt and encouraged to dry out to form a protective crust. It is also a ﬁrm alpine-style cheese that nicely contributes to the diversity of textures available.

Comté pairs tremendously well with any number of condiments, but I like to have it with either complimentary nutty ﬂavors, such as marcona almonds, or something contrastingly sweet and acidic, like the fresh apple we paired it with here. Try it also with Chardonnay, Chenin Blanc, and the lightly oxidized white wines of the Jura region.

Next on the plate is the washed-rind cheese Winnimere. Winnimere is produced by the ﬁne folks at Jasper Hill Farm in Vermont who are well known for their extraordinary commitment to raw-milk cheese (just a few months ago in fact, their blue cheese Bayley Hazen was awarded the esteemed title of World’s Best Unpasteurized Cheese at the World Cheese Awards). A product of their own herd of Ayrshire cows, Winnimere is only made seasonally, in the Winter months, when the cows are giving rich, hay-fed, raw milk. This cheese is only available for a couple months out of the year, so if you can ﬁnd this highly coveted delight (it was awarded Best in Show at the 2013 American Cheese Society Conference) I recommend taking home a whole wheel to share with friends and family.

Winnimere, as a washed-rind cheese is soft, creamy and decadent with no shortage of savory, umami notes. It is unusual to ﬁnd this style of cheese made from raw milk because they generally can’t be aged out to meet the sixty day maturation requirements without turning into a mere puddle of goo. But Winnimere does this exceptionally well, in part due to its tradition-inspired birch bark wrapping. Washed-rind cheeses get their orange color, and their funkiness, from the salt water baths they regularly receive which encourage a particular, and particularly delicious, type of bacteria to grow. Ripe washed rind cheeses are so full of ﬂavor they generally need little more than a vehicle to get it to your month; Bread or an artisan cracker work just ﬁne. Alongside, I like to have a meaty red wine or porter-style beer.

Last but certainly not least is the king of the classic blue cheeses, Roquefort. Many people don’t especially love blue cheeses, but all blue cheeses are not created equal. So I encourage folks to at least give it a chance and Roquefort is perhaps the best place to start. Roquefort is the ancestor of all blue cheeses. It has been produced for at least a thousand years. It can only be made with unpasteurized milk of particular ewe breeds, but perhaps the most critical characteristic of traditional Roquefort is the ripening it receives deep in the caverns of the local limestone caves. A nearly 2km cavernous labyrinth was formed upon the collapse of the limestone plateau of Roquefort-sur-Soulzon, and it isn’t a stretch to say that blue cheese was born in these damp and moldy hollows.

On the cheese board, it’s best to conclude with the big, boldest, baddest cheese that appeals to you, and blue cheese is a great place to leave oﬀ. Blue cheese gets its name from the blue veins that striate its interior. These particular molds are as delicious as they are spicy. For that reason I like to pair big blues with something sweet to contrast. Chocolate is perhaps the most classic pairing and we chose it for the cheese board here. To wash it down, you need an equally bold beverage. Port wines are great and so too are stouts. My personal favorite is a sweet dessert wine, such as a Sauternes, or if you can ﬁnd them a dry apple cider or apple ice wine. Yum!

So that’s how I’ll be celebrating this weekend? What kind of raw-milk cheese is on the menu for you?