Corby Kummer Remembers Deep Connections and a Tango in Rome. Oldways set the bar for educational trips. For trips, period....And I’ve never felt anything like the deep connection to the life, history, and, of course, food of a place than when seeing it with the group Oldways assembled. 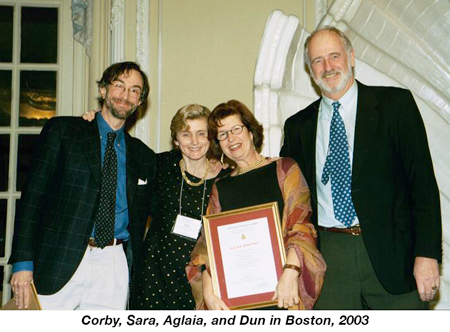 Corby Kummer Remembers Deep Connections and a Tango in Rome.

Oldways set the bar for educational trips. For trips, period. What, really, is the point of going to Tunisia if Phyllis Pray Bober doesn’t explain the iconography of ﬂoor mosaics in a Roman excavation, or Topkapi in Istanbul if Barbara Haber doesn’t explain the hierarchy and gender power balance of the harem? Or gathering horta on the hillsides of Crete if Aglaia Kremezi doesn’t explain the original names and their evolution, and Paula Wolfert doesn’t turn them into a salad or help prepare a pitta ﬁlling afterward? Or visit a monastery near Thessaloniki without a moving, scholarly lecture on the history of fasting in the Greek Orthodox calendar? Or visit an olive-oil producer if Dun Giﬀord doesn’t provide a statesmanlike introduction and Walt Willett doesn’t place monounsaturated oils and Antonia Trichopoulou doesn’t present a paper on the link between vegetables dishes heavy in olive oil and heart health? And Marion Nestle doesn’t politely but ﬁrmly point out possible logical ﬂaws or unexamined connections in all the data?

Insuﬀerably clubby questions, all, I’m well aware. But Dun, Sara Baer-Sinnott, and Greg Drescher set a standard for interdisciplinary food, health, and cultural studies that no alumni association trip will ever match—and possibly no institution will, either, though as Marion points out, NYU’s Food Studies program, now copied at colleges and universities across the country, was directly modeled on Oldways trips. And I’ve never felt anything like the deep connection to the life, history, and, of course, food of a place than when seeing it with the group Oldways assembled.

My own favorite memory, like so many, just may be invented, and involves Jody Adams, estimable chef-owner of Rialto, in Cambridge, and Trade, in Boston, so she will of course have her own version. Mine: spotting a ﬂyer for a ballroom-dance close, open to all, stuck to a pillar under a gritty overpass on the outskirts of Rome, and dragging an adventurous Jody to what looked like a disused high-school gym that night. The lessons were tango. I was good at the regimented discipline of ballroom, bad at the sinuous, spontaneous, unpredictable ﬂow of tango.

Jody was to the sinuous ﬂow born. She took up tango, seriously, and began a series of evenings at Rialto with live music and couples, of all ages, whose conﬁdent, sensual steps were themselves lessons in living—and formed another of the many communities Oldways inspired.