Nancy Harmon Jenkins Remembers Where it All Began It was at that Spain conference that Oldways took the turn that would make it in the end a far more relevant organization, one that not only celebrated old ways of doing food but at the same time recognized an important and neglected health message contained therein. 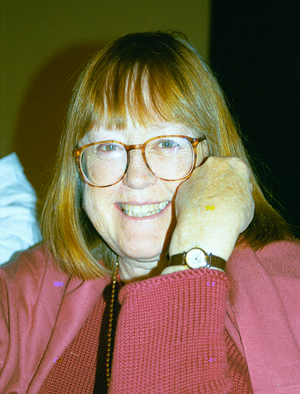 Nancy Harmon Jenkins Remembers Where it All Began

Oldways, now celebrating its 23rd anniversary, has a well-deserved reputation today as an organization devoted to promoting healthy diets—around-the-world healthy diets, it’s true, but the emphasis is almost always on the healthy part rather than the international part. But it didn’t start out that way.

Way back in the beginning, when Oldways was but a gleam in Dun Giﬀord’s eye, it seemed like a great way to travel—to travel around the world, to eat, to drink, to nosh and sip, to learn about other cuisines, to meet new people, to exchange recipes and food and ideas, to expand our own horizons and at the same time to push the envelope of American food and wine into lesser known regions of the globe. It might surprise you, but I always thought of Dun as a little like Toad in The Wind in the Willows. Remember how Toad cries out: “Travel, change, interest, excitement! The whole world before you, and a horizon that’s always changing.” That was Dun, for sure, may he rest in peace.

Little known fact: Oldways had its very beginning in the late 1980s as a program within the American Institute of Wine & Food, of which Dun was then national chairman—but it became clear very quickly that the idea was too exuberant for that organization’s rather staid board of directors, who were focused on promoting California wine and California restaurants. At the time I was publications director of the AIWF (but living and working in Boston)—and chaﬁng at the lack of funding and other restrictions placed on my eﬀorts. Oldways, when Dun waxed enthusiastic about his idea, seemed an ideal way to extend my long-standing experience of travel, living and working overseas. And when Greg Drescher, then program director of  AIWF, agreed to come on board, Oldways was founded as an entirely separate institution. In a coup d’etat that was much too convoluted to go into here, Dun was forced to resign, I resigned shortly thereafter, and, joined by Greg, the three of us set up a very enthusiastic and only slightly disorganized shop on Milk Street in downtown Boston.

Our ﬁrst ventures were tentative, to say the least, but they were whole-hearted and, need I add, loads of fun. Our initial eﬀorts at getting people together to talk about food took place in Miami and Los Angeles when we gathered somewhat motley crews of chefs, restaurateurs, journalists, food writers, wine experts, and the most impassioned food lovers—and not just Americans too. Through the eﬀorts of Fausto Luchetti, then director of the International Olive Oil Council, chefs and experts from many of the countries that made up the IOOC were brought to the U.S. to participate, to share their knowledge, and to introduce American food experts to the cuisines of Spain, Tunisia, Greece, Turkey, and similar far-ﬂung kitchens.

But that was only the beginning. Because it quickly became clear that Americans’ interest in food, which had been growing all through the 1980s, was ready to jump oﬀ and embrace a whole world that we had heard about but not necessarily known. It was time for international conferences, still under the principle aegis of the IOOC but involving local and national tourist boards, food and wine consortia, olive oil promotion boards, and even hoteliers eager to reap the beneﬁts of so many journalists collected in one place. I remember particularly the ﬁrst, held at Porto Carras, a gorgeous resort in northern Greece, where we learned that Greek food was not just feta cheese and stuﬀed grape leaves and Greek wine was not just retsina. Instead, we were introduced to a panoply of dazzling and exciting dishes from every one of Greece’s array of distinctive regions, and sampled enough great wine to keep the Wine Spectator happy for a year—none of it resinated. It was all new but it was also old because the point of Oldways, we said, was exactly that—to celebrate the old ways of doing things, with the conviction that these were so frequently and so obviously better than the new ways—better than ginned up restaurant plates decorated with rich sauces and certainly far, far better than modern fast food.

The second conference took place in Spain in 1992, and that was the turning point. It was the year of the Barcelona Olympics, the year of the Seville World’s Fair, the year that celebrated the 500th anniversary of Columbus’s voyage to America, and the three-part conference (Barcelona-Seville-Madrid, a logistical if successful nightmare) celebrated the Columbian Exchange—New World products (tomatoes, beans, chocolate, potatoes, etc.) that transformed Old World eating habits irrevocably, and simultaneously the introduction of European foods into the Americas—from beef and pork to wheat and rice, and, most tellingly, sugar, with its grim counterpart in the enslavement of Africans. That was an intellectual gathering to remember with speakers and panelists from all over Spain (even the Canary Islands), the U.K., and the U.S., including such academic lights as Sidney Mintz, Harvey Levenstein, and Sol Katz, along with prominent food historians such as Sophie Coe and Elisabeth Luard. But we didn’t stop with food history, for activists like Tim Lang from London’s City University explained to us what our future would be like as both companies and countries continued to amalgamate—globalization before the fact. It was, everyone agreed, the birth of a movement.

It was at that Spain conference that Oldways took the turn that would make it in the end a far more relevant organization, one that not only celebrated old ways of doing food but at the same time recognized an important and neglected health message contained therein. I remember the turn well. It actually began on a street in Seville a few years earlier, after a particularly spirited discussion of the eﬀect of the Columbian Exchange on diets around the world.

I said: “Hey, wait a minute, guys, Oldways is about ‘old ways,’ not about diet and nutrition.”

Fortunately, nobody listened to me because the rest, I think, is history. With the help of the IOOC, which immediately saw a possibility for olive oil, a key ingredient in the healthy Mediterranean diet, Oldways went on to sponsor the 1993 Mediterranean Diet Conference with the Harvard School of Public Health and that was the beginning of a movement that has gone on to greater and greater strengths over the two decades since. With the three principle organizers now departed, it remains for Sara Baer-Sinnott and her dedicated team to continue the challenge that was started 20 years ago on a street corner in Seville.