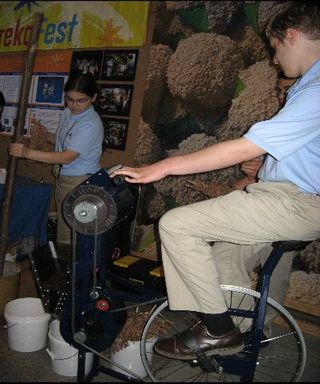 Jeﬀ Dahlberg is the former Chairman of the Board of the Whole Grains Council. Jeﬀ served in the Peace Corps in Niger in the 1980s, where he ﬁrst became familiar with the importance of improving access to nutritional foods. Here’s Jeﬀ, telling us about an amazing team of teens helping others (original article can be found on the Whole Grains Council Blog).

We at the Sorghum Checkoﬀ Program get phone calls all the time from people interested in sorghum.  Some of the common questions that come across my desk range from the practical – “Can I eat the grain?” or “What store in Boston carries sorghum?” – to the  downright oﬀbeat – “Can I grow it in my backyard here in New Jersey?” Then last September, I received a phone call from a bunch of high school students wanting to know something about sorghum.  But these were not your average kids writing a paper for school.  This group was Teen Technology, an InvenTeam from New Jersey, and they wanted to know how you de-hulled sorghum as part of their proposal to the Lemelson-MIT invention and innovation program. Out of six thousand pre-proposals, 300 hundred were selected for a full-blown proposal, and out of those only 13 teams were selected for funding.  Still in their pre-proposal stage, these kids were looking for something that they could build.  It was pretty obvious that they did not know much about sorghum, so I had a seed company called Sorghum Partners send them a box of sorghum panicles (a panicle is a cluster of ﬂowers – imagine the way lilac ﬂowers grow, all bunched together, and you’ll know what I mean). As they were rather computer savvy kids, we scheduled a Skype call and so began my adventure with a bunch of highly skilled, intelligent, enthusiastic, and self-proclaimed “nerdy” high school kids.  On our call, we talked for a couple of hours about their design ideas, what they were thinking and why.  I gave them a quick Sorghum 101 and after we shot ideas back and forth for a bit, oﬀ they went. So today, here I am at MIT for the EurekaFest, where high school InvenTeams from around the country are presenting their ideas.  As for the Teen Technology team, what’s come out of the minds of these kids is something that could signiﬁcantly impact poor subsistence sorghum producers throughout the world: a design and prototype of a simple machine for threshing sorghum and millet.

Their ﬁrst prototype of a bike-peddled threshing machine, as shown in the photograph above, looks amazing.  In their words, this machine “will replace the mortar and pestle technology currently used by subsistence farmers in developing parts of the world – particularly in Sub-Saharan African countries.” Their vision has rendered “a simple and very inexpensive design that can be constructed with materials and tools available in the poorest regions of the world.  Since the intended users of the threshing machine typically do not have access to either electricity or gasoline, the thresher will be powered by hand or the pedal action of a bicycle which has its sprocket linked to the drive shaft of the thresher.” And the result of this invention is, in a word, impressive.  The processing rate is expected to be between 5 and 20 kg of raw grain per hour, with 80 percent yield and less than ﬁve percent broken kernels.  Not only could this invention signiﬁcantly reduce the amount of time people spend on threshing sorghum, but that saved time could free them up to do other things, like working on making their lives better. Regardless of what happens here at EurekaFest, I’m proud to keep working with these kids and hope some international foundations may seek ways to get involved with this project.  Whenever I hear people tell me that they are worried about the kids here in the U.S., my faith always gets restored by a group like this. Hard working… smart… thinking about others less fortunate than them.. and most importantly of all, great kids! (Jeﬀ Dahlberg) *Video featured on the Discovery Channel website: Agribike Sends Seeds to Spinning Class