With Raw Milk Cheese Appreciation Day right around the corner, we at the Oldways Cheese Coalition have been gathering resources to help all you cheese enthusiasts at home to celebrate in style.

With Raw Milk Cheese Appreciation Day right around the corner, we at Oldways and Oldways Cheese Coalition have been gathering resources to help all you cheese enthusiasts at home to celebrate in style.

While a well-curated cheese plate is perhaps the simplest way to join the Appreciation Day fun preparing a traditional and cheesy recipe may be just the ticket for the more culinary-minded and kitchen-savvy. I for one will be hosting a potluck party and will be encouraging guests to put together their favorite raw-milk cheese dishes. I’m hoping that they will pick something from the list below, a sampling of my personal favorite recipes featuring raw-milk cheese.

Fondue au Fromage
Cheese fondue is one of France’s most iconic dishes. It is a preparation that dates back several hundred years in the Alpine regions of eastern France as a delicious and nutritious way to garner sustenance through the harsh mountain winters. While fondue can be made with several cheese varieties (including Le Gruyere, Appenzeller, and Emmentaller, all of which also happen to be made with raw milk) my favorite incorporates aged Comté. This classic Comté fondue recipe marries the nutty, tangy cheese with the unique, dry white wine from the Jura region. Cheese fondue is especially appealing for a dinner potluck party because it is not only delightfully simple to prepare, it also encourages convivial consumption with guests hovering socially around the communal pot. Raw-milk cheese fondue is a true homage to traditional ingredients and to slow ways of eating. 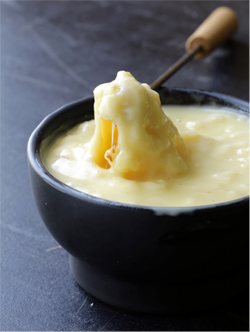 Directions:
In a bowl, combine the cornstarch and shredded cheese.

Rub the inside of the fondue put with the garlic, then discard. Add wine and bring to a boil.

Reduce heat to a low simmer and gradually incorporate cheese, stirring gently, until melted. Continue until fondue is smooth and richly coats the back of a spoon. Season with black pepper to taste.

Serve while hot, alongside crusty whole grain bread for dipping.

Spanish Tortilla
My ﬁrst experience with authentic Spanish Tortilla was, ironically, in Sicily. I was working on an organic vineyard and olive grove and one of my fellow laboring sojourners had joined us from just outside Valencia. This version of a potato and egg frittata is one of the most common culinary specialties found throughout Spain and it was one of the dishes that she and her family prepared weekly. It is great served warm for, as in Spain, a long, leisurely lunch or cold as an easy snack anytime throughout the day. It also makes a great base recipe for experimentation. Try adding chorizo, sofrito, or piquillo pepper for an added kick. 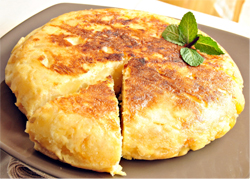 Directions:
Cut peeled potatoes in half and slice into relatively thin stripes, lengthwise.

Peel and dice the onion and combine with potatoes in a large bowl. Season with salt to taste.

Heat the olive oil in a cast iron skillet or heavy, medium-sized non-stick frying pan. When the oil is up to medium-high temperature, gently incorporate the potato and onion mixture. Fry at a low heat until potatoes are cooked and tender throughout (roughly 10-12 minutes). Use a slotted spoon to removed the mixture and drain in a colander bedded with paper towels.

While the potatoes drain, crack the eggs into a large mixing bowl and beat with a whisk or fork. Combine the eggs into the potato mixture and add the shredded cheese. Incorporate thoroughly.

Pour a small amount of olive oil into the cast iron skillet, or medium non-stick frying pan and bring to medium heat. When up to temperature, slowly add the combined egg, cheese, and potato blend, distributing evenly. Bring the heat to medium-low and cook until the edges of the tortilla have started to brown (6-8 minutes). The interior will at this point remain undercooked.

When the bottom has suﬃciently set and browned, place a large dinner plate or sheet pan over the frying pan to cover. Carefully(!) ﬂip the tortilla over.

Return the pan to medium heat, and gently replace the tortilla. Cook for an additional 3-5 minutes until the egg has set through the center.

Let rest for 5-10 minutes and cut into wedges. Equally delicious served warm or at room temperature.

Roquefort Salad
This recipe for a simple salad with apples and Roquefort was published in the Fall CheeseMatters newsletter and it has quickly become one of my standby starters to a meal or an easy stand-alone lunch. At that time, Roquefort was having an unreasonably diﬃcult time clearing customs but I’m happy to say that, with the diligent eﬀorts of the CCC and many others, this benchmark blue is back and as healthy, nutritious, and delicious as ever. This recipe is terriﬁc too because even if blue cheese isn’t for you, so many other cheeses work great. I suggest trying it instead with an aged raw-milk cheddar or a sheep’s milk cheese from the Pyrenees. 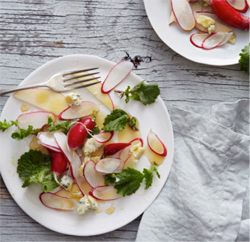 Directions:
Cut the apples in half, then remove the core and seeds with a melon baller or small spoon. Using a sharp knife or a mandolin, cut the apples into slices about ⅛ in thick Put the apples slices in a bowl and toss with the lemon juice to prevent them from browning.

Using the knife or mandolin, cut the radishes into very thin rounds and add to the bowl with the apples. Rinse the radish tops thoroughly, if using, tear into bite-size pieces, and add to the bowl. Crumble the blue cheese into the bowl. Drizzle in the olive oil and a good pinch of salt and gently toss everything together. Throw in some whole radishes if you have some particularly beautiful specimens.

Divide among four plates, drizzle the honey over each salad, and serve.