A Dash of Common Sense

The media seem to delight in recasting dietary indulgences as health foods, and it appears that salt (also known as sodium chloride, the main contributor of sodium in our diets) is the latest food additive to be pardoned by the press. But with everything we know about diet and blood pressure, is it wise to start reaching for salty snacks? 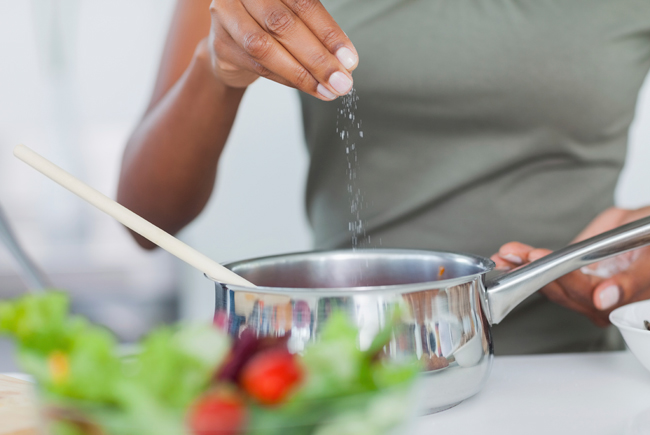 The media seem to delight in recasting dietary indulgences as health foods, and it appears that salt (also known as sodium chloride, the main contributor of sodium in our diets) is the latest food additive to be pardoned by the press. But with everything we know about diet and blood pressure, is it wise to start reaching for salty snacks?

Although studies have emerged that question the beneﬁts of sodium restriction, the overwhelming scientiﬁc consensus is not as wishy-washy as headlines would lead you to believe. Virtually all parties, including those that question the risks of sodium, agree that excess salt can cause high blood pressure (though their deﬁnition of excess leaves room for debate). Additionally, respectable health organizations, including the American Heart Association, the 2015 Dietary Guidelines Advisory Committee, and the Harvard School of Public Health, all agree that at an average of 3,500mg per day, current sodium consumption is too high. (The current recommendation from the 2010 Dietary Guidelines for Americans is 2,300 mg of sodium per day, which is about one teaspoon of salt.)

Salt is only one of the many food compounds that aﬀect the risk of high blood pressure and heart disease. So by choosing low sodium versions of standard American junk food, you aren’t taking advantage of all of the nutritional tools available to help you live a healthier, longer life. That’s why, at Oldways, we encourage home cooking, especially recipes inspired by traditional food cultures across the globe, such as the Mediterranean diet, or the African Heritage diet.

Over 75% of the sodium in American’s diets comes from restaurants and processed foods, so by choosing fresh, whole foods and cooking from scratch, your salt intake will fall naturally, and your diet will improve. Talk about a win-win! A healthy pinch of salt in home cooked recipes brings out the ﬂavor in vegetables, and still doesn’t come close to the amount of salt that processed foods require to keep from spoiling as they sit on store shelves for months on end.

In the Scientiﬁc Report of the 2015 Dietary Guidelines Advisory Committee (a newly released document, prepared by 14 of the nation’s leading nutrition experts), the authors found that “dietary sodium reduction can eﬀectively prevent and reduce high blood pressure,” and found moderate evidence that high levels of sodium are a risk factor for heart disease. The committee concluded that, “Given the ubiquity of sodium in the food supply, concerted eﬀorts to reduce sodium in commercially prepared and processed foods, as well as encouragement of home cooking using recipes with small amounts of sodium are needed to decrease intake toward recommended levels.”

Indeed, home cooking is a wise approach to stay healthy. One third of US adults have high blood pressure, and many more are at an increased risk of heart disease and stroke. In fact, the estimated lifetime risk of developing high blood pressure in the US is 90%. While these numbers don’t apply to all Americans, cutting down on salt is a good idea for just about everyone. That’s because foods high in sodium (restaurant meals and highly processed foods) are often nutritionally inferior to home cooked meals made from fresh, wholesome ingredients.

Rather than eating by the numbers (nobody wants to bring a calculator to the dinner table!), we invite you to prepare more home cooked meals, centered on whole grains, beans, fruits, and, vegetables, and garnished with spices, olive oil, ﬁsh, meats, or cheeses. When shopping for pantry staples, such as canned beans or vegetable broth, look for low sodium or no-salt-added varieties. We also encourage you to experiment with the herbs and spices of traditional culinary cuisines, to ﬂavor your food without relying on salt as a crutch. (See our heritage pyramids for inspiration).

Cooking from scratch is a great way to keep control over the amount of salt (and other nutrients) in your diet, instead of putting your health at the mercy of companies where cost and shelf-life may be top priorities. For healthy and delicious meal ideas, browse the recipes on our site, or in our 4-Week Menu Plan books. What is your favorite home cooked recipe?