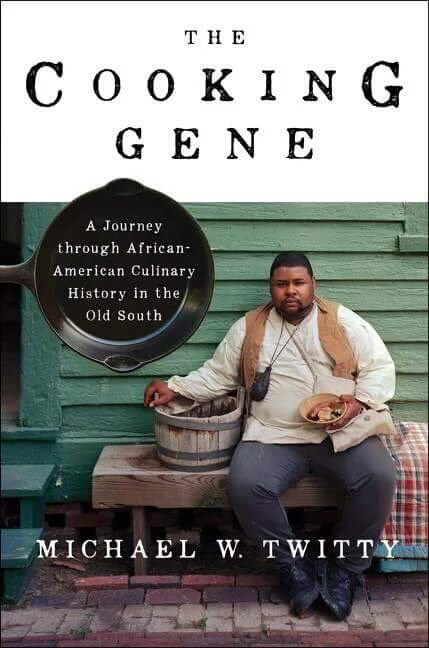 We Africans in the Americas have not just been adopters, we are border crossers and culture benders ….. So much was lost—names, faces, ages, ethnic identities—that African Americans must do what no other ethnic group writ large must do: take a completely shattered vessel and piece it together, knowing that some pieces will never be recovered. This is not quite as harrowing or hopeless as it might sound. I liken it to the Japanese art of kintsugi, repairing broken vessels using gold. The scars of the object are not concealed, but highlighted and embraced, thus giving them their own dignity and power.”
– Michael Twitty

In The Cooking Gene: A Journey Through African American Culinary History in the Old South, culinary historian Michael Twitty poignantly tells the story of the African origins of Southern cuisine through the lens of his own family history. He has provided readers with a new type of roadmap for how to use genetic sleuthing, family oral history, heirloom recipes, and documentary evidence to discover where their African ancestors came from, what they ate, and how they helped to feed and still feed Americans. In a culture that so often celebrates the foods of more recent immigrant cultures, The Cooking Gene breaks ground by forcing an acknowledgment of how the genesis of Southern food was a synthesis of African, Native American, and European foodways. Because planters and traders correlated the ethnic and regional identity of the enslaved Africans to the speciﬁc agricultural needs of the Chesapeake, the Low Country, the Lower Mississippi Valley, and the Gulf, the foodways of these parts of the South ended up diverging dramatically. The Southern diet, like the Africans who were brought here long ago, is not monolithic.

The Cooking Gene is a courageous volume in more ways than one. First, in its pages, Twitty has laid himself bare. He talks about the things that aren’t easy, including the loss of his mother. He willingly puts himself into the most physically uncomfortable positions, as when he worked a tobacco patch and picked cotton to better understand the plight and might of his enslaved ancestors. What’s more, bringing The Cooking Gene to fruition was a feat of conviction and perseverance. Although his volume is now critically acclaimed and widely heralded as a signiﬁcant new voice in the canon of American food writing, Twitty initially found that publishers were quickly dismissive of his passion project. That all changed with the revelations of Paula Deen’s bigotry and Twitty’s subsequent response: When his open letter to the former Food Network host went viral, publishers took notice. Even then, because The Cooking Gene is a genre-defying book, there were those short-sighted detractors who bemoaned that the text didn’t include enough photos and recipes (as if cookbooks were the only manner in which to tell the story of food), or that there was “too much genealogy.”

Michael Twitty meets with fans after his lecture at Boston University

It was impossible for me to read The Cooking Gene and not heed the challenge to further trace my own ancestral roots. Admittedly, a journey such as Twitty’s takes years and even generations (he had other avid genealogists in the family that preceded him). Given the erasure from the historical records that many African Americans face when researching their origins, it may seem like a daunting task. But to take that crucial ﬁrst step, Twitty recommends starting with something very personal within your grasp. At a recent lecture at Boston University, he advised audience members to start recording their unique food biographies, and to include even those things thought of as mundane. For example, he told the story of a young woman who talked about fond memories of stir-frying vegetables and adding them to ramen as a meal she shared often with her mother. Twitty urged her to take note of this and hold fast to it.

Once you’ve been able to make such a record, the next step would be to reach out to elders both in your family and your broader community and cook with them. And to cook with them means more than just measuring and noting down quantities; it means establishing respect and trust. To cook with them means to watch their movements, to spend time with them in the kitchen cooking a recipe more than just once, to go shopping with them, and to ask questions not just about the cooking process, but also about the experience behind the dish—about why and when it was cooked, who did the work, and who partook. Twitty explained the recipe components are merely the “bones,” but that you also need to understand the “soul,” or what animates the dish that you are preparing. In this way “it is as if you have ﬁlled the room with the people that [the elder] lost.” And by doing this, you can, albeit brieﬂy, talk to your ancestors.

Twitty certainly has done this work to bring a cast of characters from his own family tree alive for the reader. And in turn, his book extends this same gift of possibility to all of its readers: that they too can reclaim the most obscured past by decoding the present.