Are we eating better? Worse? What are the trends? According to data presented last week at a meeting of the Dietary Guidelines Advisory Committee (DGAC), Americans’ eating habits didn’t improve much between 2001 and 2010, except in one area: whole grains.
Whole GrainsWhole Grains Council 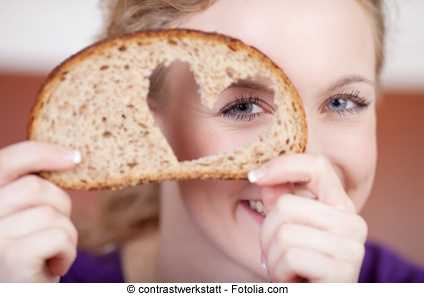 Are we eating better? Worse? What are the trends? According to data presented last week at a meeting of the Dietary Guidelines Advisory Committee (DGAC), Americans’ eating habits didn’t improve much between 2001 and 2010, except in one area: whole grains.

The scientists on the committee looked closely at four food groups where Americans continue to fall far short of recommendations, to see if any progress was being made. The data showed that fruit and dairy intake had stayed pretty much level over this period as these two graphs illustrate. (You can see the trends by gender and by age group, then you can see the overall trend in the last set of bars on the right — notice how the blue and green bars are identical for fruit and for dairy?): 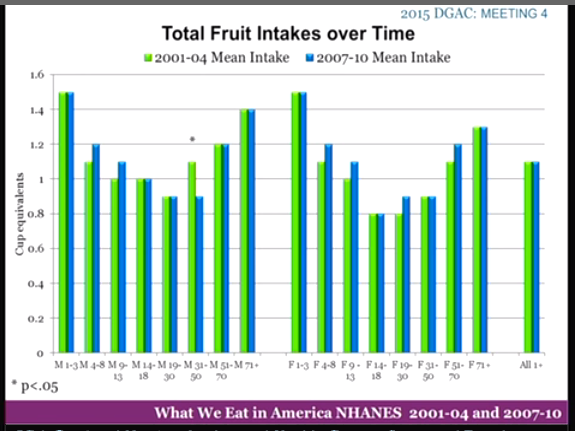 Vegetable intake actually went down slightly (even though popular choices like iceberg lettuce and French Fries are included in the vegetable total): 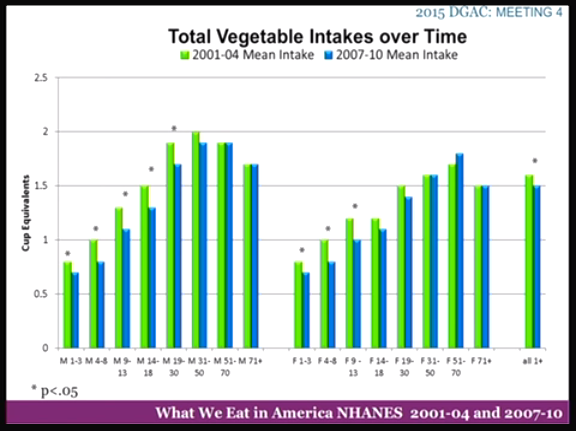 Only whole grains were up – and they increased 33% during this period. Yay. Sound the trumpets. 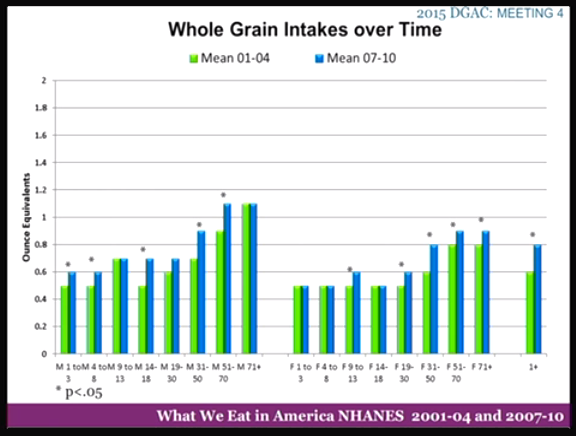 We’re feeling pretty good about this, especially since the increase is spread over almost every age group, for both males and females, and no group decreased its whole grain intake. The eﬀorts Oldways and its Whole Grains Council have made to educate people about the beneﬁts of whole grains – and to help them ﬁnd whole grain products, with the Whole Grain Stamp – are making a dent. Makes us feel good about getting up in the morning and going to work.

We can’t stop here, though, as these next two graphs make clear. Even though whole grain consumption rose 33%, people are only eating, on average, less than one serving of whole grains – instead of the three or more servings (called “ounce equivalents” by USDA – don’t ask!) recommended by the Dietary Guidelines. Very few people are following oﬃcial advice to “Make at least half your grains whole, as the next two graphs show.” 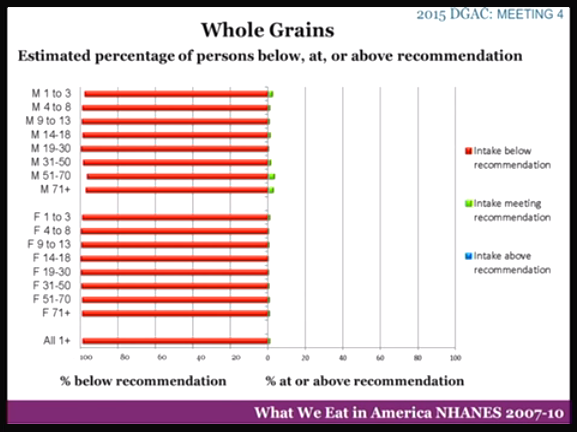 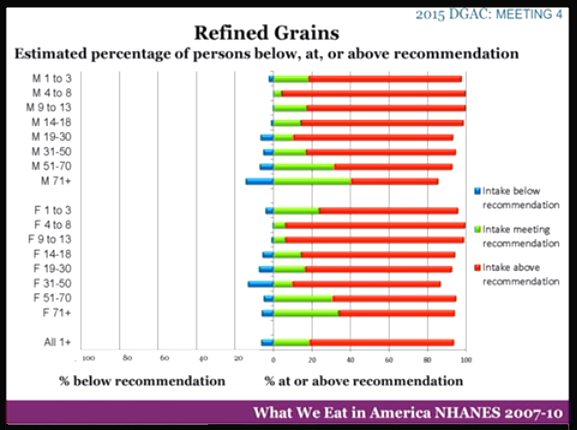 We’re pretty much all getting plenty of reﬁned grains, though, as the lower of the two graphs shows. This time the not-so-good red bars are on the right, since close to 75% of us make more – often much more – than half our grains reﬁned.

So what happens with these data? U.S. law requires our government to update the Dietary Guidelines for Americans every ﬁve years, and the process starts with the appointment of a Dietary Guidelines Advisory Committee, a dozen or so qualiﬁed nutrition professionals who meet endlessly for as much as two years to review studies that have been published since the last update. They comb through the evidence, and summarize it in a report which will be used as the key reference while USDA and HHS create the 2015 Dietary Guidelines.

What will that report say? No one knows yet, but a few draft conclusions were shared at the DGAC meeting, including these:

The messages are clear: Whole grains contribute signiﬁcantly to health. We’re eating more of them – but still not enough to reap all the health beneﬁts. If you haven’t already, make the switch: go whole grain next time you serve yourself some cereal, a sandwich, or a pasta meal.