We appropriated the topic of this week’s Fresh Friday from the cookbook of the same name by FoodMatch CEO Phil Meldrum.  While the word “simply” has at least 6 meanings, we think that Phil would agree with us on our interpretation of the deﬁnition:  wholly and absolutely, as well as clearly and easily.

Wholly and absolutely, the Mediterranean Diet is a treasure, an intangible cultural heritage, as UNESCO called it in 2010.  It’s also absolutely good for health, as countless nutrition science studies proclaim its many health beneﬁts, and doctors and dietitians recommend the Mediterranean Diet for their patients and clients.  A study of 515 physicians by the social platform Sermo found,  “compared with the other diets, doctors overwhelmingly (51%) chose the Mediterranean diet  as their favorite one for long-term optimal health.” 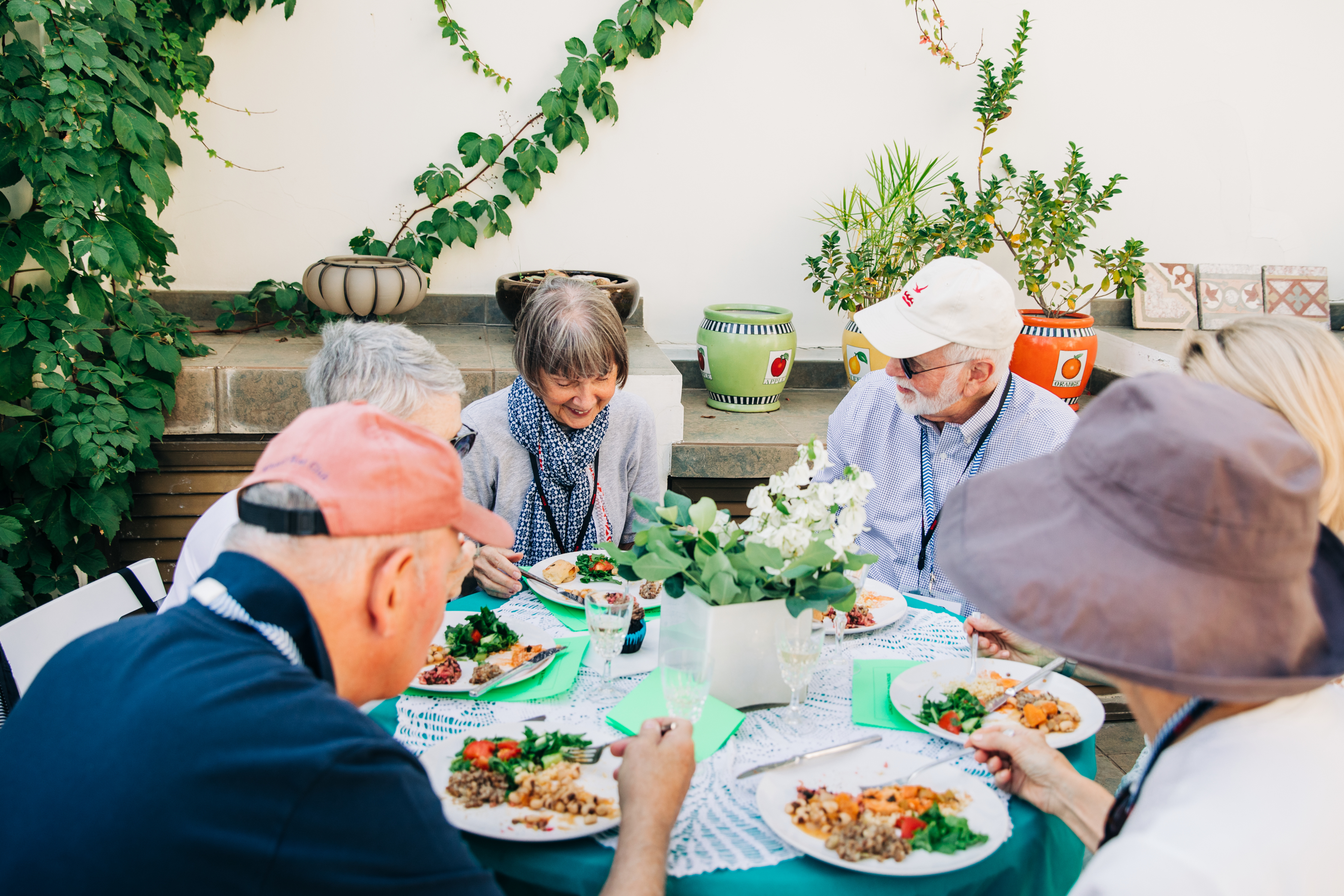 Group meals were one of the highlights of our culinary tour to Cyprus! (photo by Kristin Teig)

Clearly, we would agree with Sam Sifton, former New York Times food editor, who during an interview on NPR’s Fresh Air called the shift to family meals one of the ‘precious few good things’ happening as a result of the pandemic. ”A lot of us are really experiencing the joys of eating together with family regularly,” he said. “For me, it’s been kind of joyful amid all the sorrow.”

Pre-covid, the number of times families eating together has been steadily declining.  The weekly email newsletter, The Scramble, reported in 2019 that in the past 20 years, the frequency of family dinners has declined 33 percent. In addition, a recent poll by YouGov found that 62% of parents with children under 18 wish they had family dinners “much more often” or “somewhat more often.”  Similarly, Kitchen Stories conducted a survey in 2019 concerning eating habits among people living in the United States (U.S.), and found that almost 73 percent of the U.S. individuals interviewed considered eating together as a family as very important or fairly important. 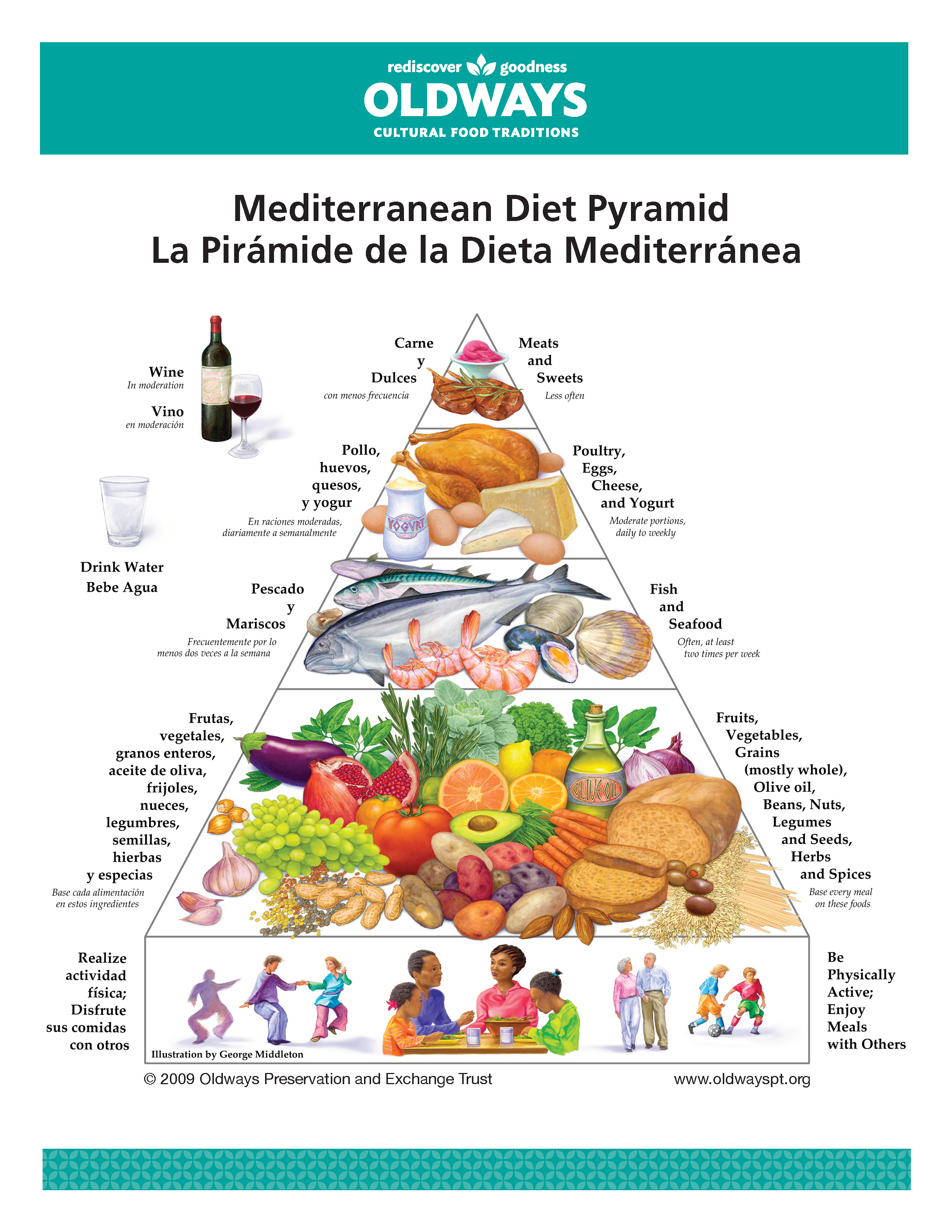 Whether or not you live in the Mediterranean basin, there are many reasons to enjoy meals with family and friends.  Eating together can help reduce stress, build family relationships, and improve the quality of food choices, as well as the quantity (better portion control). Research studies also indicate that young people whose families routinely eat meals together spend more time on homework and reading for pleasure. Frequent family meals have also been related to better nutritional intake and a decreased risk for unhealthy weight control practices, substance use, sexual intercourse, and suicidal involvement.

In a 2014 article in The Atlantic magazine, Cody Delistraty reported that children who do not eat dinner with their parents at least twice a week also were 40 percent more likely to be overweight compared to those who do, as outlined in a research presentation given at the European Congress on Obesity in Bulgaria in May 2014.

Easily describes the preparation (assembly or cooking) of a Mediterranean meal to be enjoyed by family and friends.  As Oldways writes about in our 4-Week Mediterranean Menu Plan, Make Every Day Mediterranean, embracing the Mediterranean Diet is all about making some simple but profound changes in the way you eat today, tomorrow, and for the rest of your life. US News & World Report agrees. For three years running, the magazine’s annual diet ranking has named the Mediterranean Diet the #1 Easiest diet to follow (as well as the #1 Best Diet overall).

One of our favorite sections of Phil Meldrum’s book, Simply Mediterranean, is called Gatherings and exempliﬁes “simply.”  Gatherings includes “four regionally-inspired antipasti platters, each with little bites: olives, charcuterie, marinated vegetables and beans, regional cheeses, artisan breads, tapenades, dips and spreads. Assemble these in a few minutes before your friends arrive and watch as the delicious morsels disappear.”

To experience Simply Mediterranean, explore our collection of recipes.

Susan Mason
Who needs diet fads, the Mediterranean diet has been around for a long time and is manageable and sensible.
Frances
Speaking from Lockdown. London, If you live alone then eating with others is lovely but with Covid19 it is a rare luxury
Katherine-Oldways
Hi Frances, you are right. For those who live with others and are able to share meals together more often it is great. For those who live alone, it is difficult right now. Stay strong and connect to loved ones how you can, perhaps sharing a meal together via FaceTime or Zoom? Sending positivity!