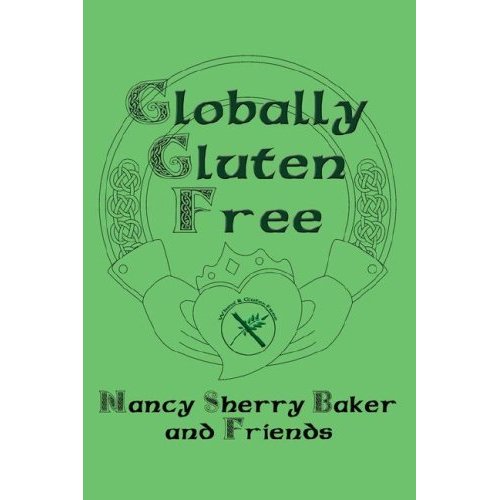 How do you say “wheat,” “barley,” and “rye” in Hungarian? That question became a matter of life and death for Nancy Baker when her military husband was posted to Budapest shortly after she was at long last diagnosed with celiac disease.  It’s estimated that about 1 in 133 Americans have celiac disease. For these people, eating the gluten protein found in wheat, barley, and rye causes the body to attack itself, with an auto-immune reaction that destroys the ability of the small intestine to absorb nutrients.  Eventually, widespread malnutrition results, and manifests itself in so many ways that diagnosis of celiac disease takes, on average, eleven years (read more here). Nancy had long suﬀered from mysterious symptoms, including migraines and premature osteoporosis, and things only got worse when the young wife became pregnant. “It’s just morning sickness,” her doctor replied when the endless nausea caused her to lose twenty pounds in her ﬁrst trimester. “Eat dry toast. Saltines. Plain noodles.”  But all these wheat-based foods just made Nancy sicker and sicker, as her celiac disease advanced untreated.  When her son was ﬁnally born, doctors discovered that the challenging pregnancy had left him without a “soft spot;” he needed surgery on his skull to give his brain room to grow. I remember how challenging new motherhood was for me in my own country, in good health, with a healthy infant, and I marvel to think of Nancy heading for Hungary under these conditions. In fact she lived seven of the next ten years overseas, including stints in the former Czechoslovakia and in Spain, and adopted two more kids along the way. In her spare time (!) she wrote a pioneering gluten-free cookbook (see above) and merged her personal advocacy work on the disease with the National Foundation for Celiac Awareness, a non-proﬁt she now serves as Director of Education. Nancy and I met last year when we both spoke on the same “Healthy Menus” panel at the National Restaurant Association’s annual convention, but at that time I knew nothing about her personal story. This year Nancy organized her own panel for the NRA show, and asked me to speak on ways that restaurants can cross-market gluten free meals and whole grains, to attract customers interested in both of these strong movements. It’s a wide-spread misperception that gluten-free means grain-free, and I was happy at the opportunity to point out the many delicious gluten-free grains (amaranth, buckwheat, corn, millet, oats, quinoa, sorghum, teﬀ and wild rice) that can be enjoyed as whole grains. If you’ve tried yesterday’s gluten-free products and found them dry or crumbly, you haven’t eaten gluten-free at the hands of an expert chef. More and more chefs (including our own Whole Grains Council culinary advisor Joel Schaefer) are now specializing in creating gluten-free dishes, and some chain restaurants have put out the word that they have trained their staﬀ to do gluten-free safely and deliciously – not only ‘cause it’s the right thing but because there’s big business in serving meals that celiacs can enjoy along with all their friends. (As one of my fellow panelists, the mother of two celiac kids, pointed out, “I have to cook almost everything from scratch every day, and I’d love to eat out more often!”) Eleven of us ate at Maggiano’s Little Italy in Chicago Saturday night, sharing and savoring the same gluten-free dishes even though half of us have no problem with gluten. At our packed panel on Sunday morning, one restaurant owner asked how he could get the gluten-free training he needs to oﬀer a safe dining environment to celiacs, and Nancy Baker replied, with the voice of experience, “I can help you with that. I can provide materials to train your staﬀ, ideas for recipes, information about reading labels. And,” she added as an afterthought, “I can do it in ﬁve languages!”  — Cindy